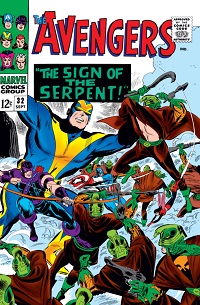 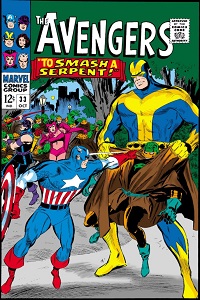 These two issues are not heavy on ethical content related to Captain America specifically, but it is a particularly timely story… unfortunately. It deals with a white nationalist movement that, under the cartoonish guise of the Sons of the Serpent, rallies populist fervor and gains some mainstream respectability until the Avengers reveal them for the anti-American frauds they are. This is just one of many times that Stan Lee’s social conscience took center stage and Marvel Comics became meaningful as well as entertaining, several years before this approach became more common in the early 1970s with the anti-drug issues of Amazing Spider-Man and the Hard Travelin’ Heroes’ trek through America in Green Lantern/Green Arrow. (It’s also clear evidence that comics have not “only recently” addressed political themes.)

As issue #32 opens, though, things have more mundane, with Cap and Hawkeye showing their new-and-improved working relationship (after Cap forgave Clint for letting the villainous Black Widow escape in issue #29). 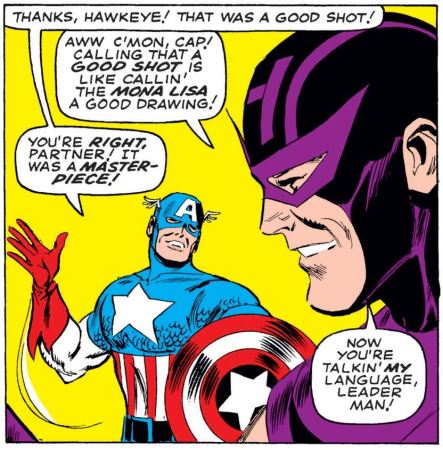 Meanwhile, Hank is still trying to adjust to being a Goliath full-time, and Cap practices some tough love (being more than familiar with self-pity himself). Once again, Clint shows how much he’s changed when he urges Janet to trust Cap (unless he just wants to watch the show!). 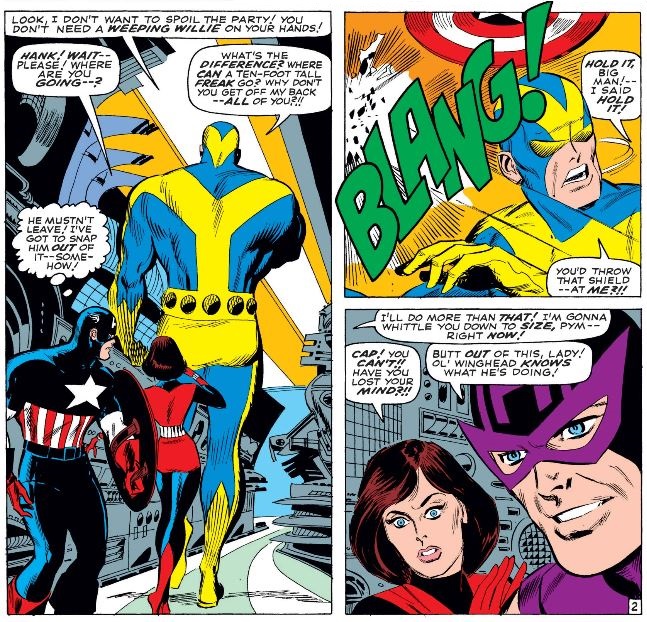 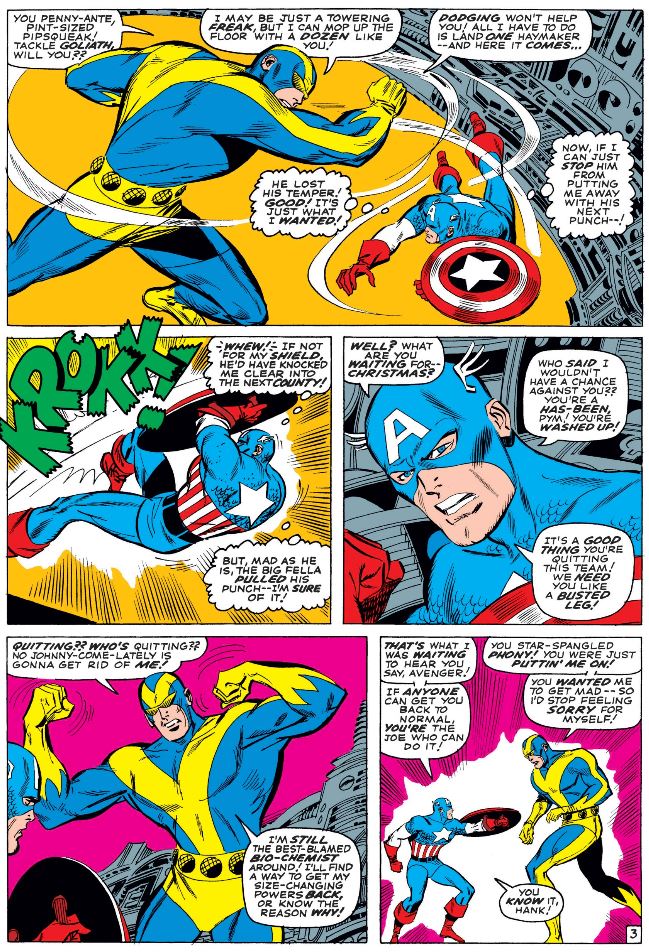 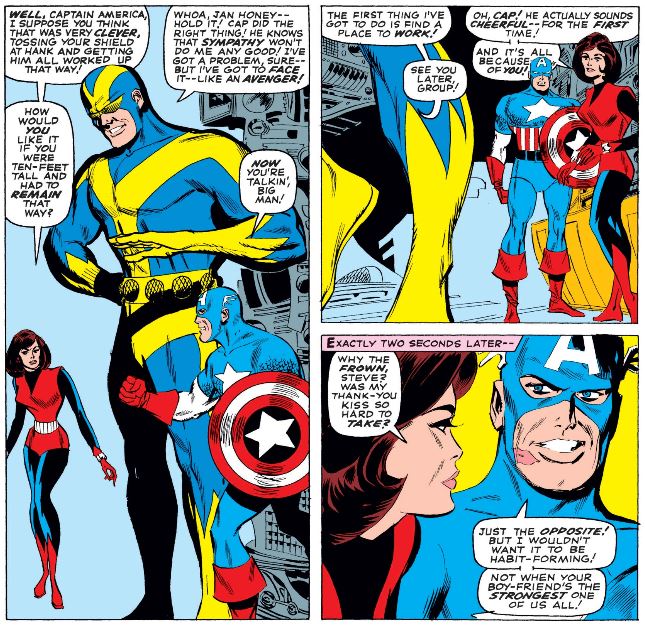 Good answer, Cap, but we know it’s more likely modesty than concern for your safety.

And one more bit of good-natured ribbing between Cap and Hawkeye—not to drive this into the ground, but after noting so many cases of these two getting on each other’s last nerves, this is worth celebrating! (And also shows that Cap is not one to hold a grudge.) 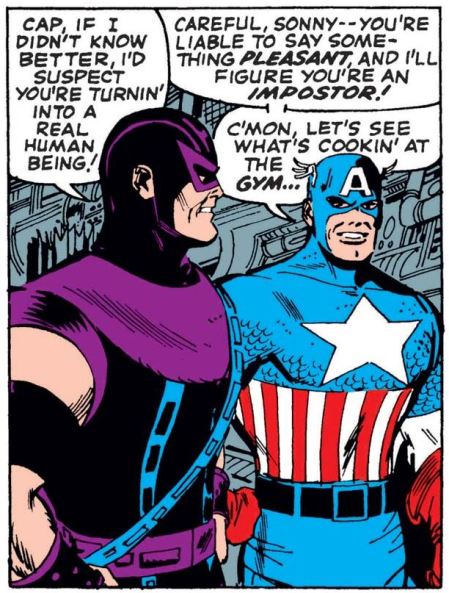 We can’t put it off any longer… on page 4 we meet the villains of the story, the Sons of the Serpent, harassing a foreign-born citizen named Gonzales. 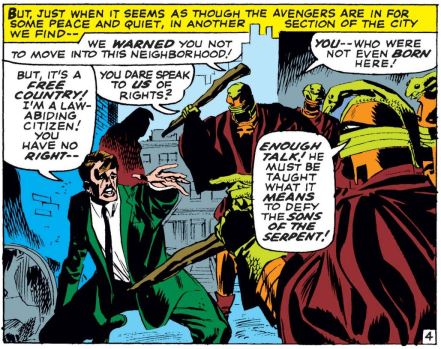 Aside from the goofy costumes, there’s nothing fantastical about this scene, nor the neighbors’ reaction below. 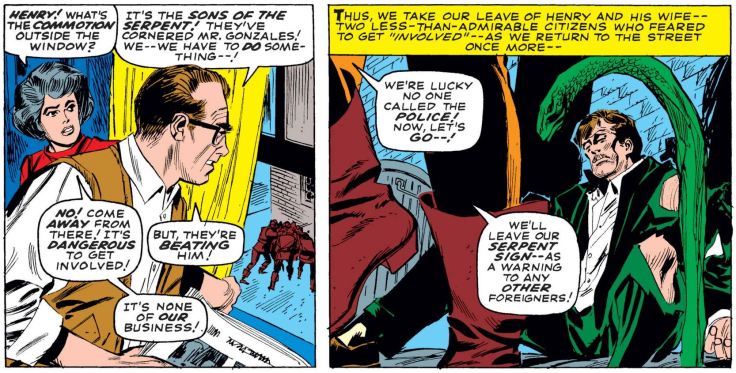 Henry and his wife’s comfortable refusal to get involved is a perfect illustration of the famous saying that “the only thing necessary for the triumph of evil is that good men do nothing,” often attributed to Edmund Burke (though the quote and sentiment go back much farther).

In case there was any doubt as to the Serpents’ goal…

Here we see, not only their xenophobia (and implied racism), but also the perverse joy they gets from being bullies: “there ain’t nobody ya can’t push around.” This also suggests a refusal to be pushed around, as these people see their preferential position in society challenged by others who are rising in status, and mistaking the increased respect and rights given to others as an attack of themselves. (Again, all too familiar.)

But there is a spy in their midst… literally!

Natasha rushes to Clint, having overcome her previous brainwashing due to her feelings for him, to alert him about the Serpents’ threat. 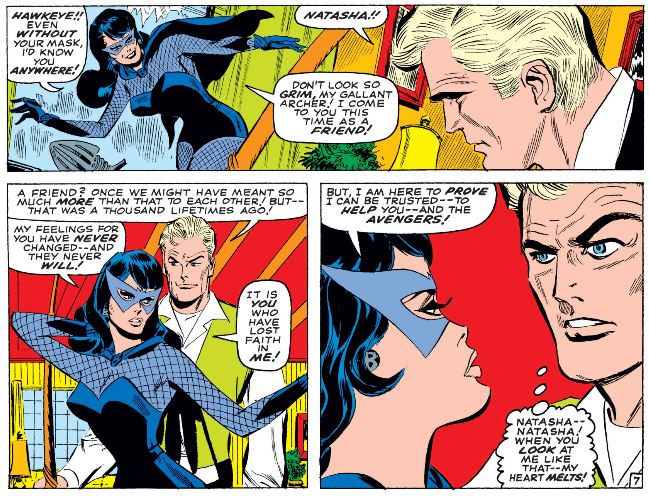 Meanwhile, Hank takes on a new assistant, Bill Foster, to help him return to normal size. (A decade later in our time, Foster will follow in Hank’s oversized footsteps as Black Goliath, then Giant Man, then Goliath.)

But when Foster leaves the lab… 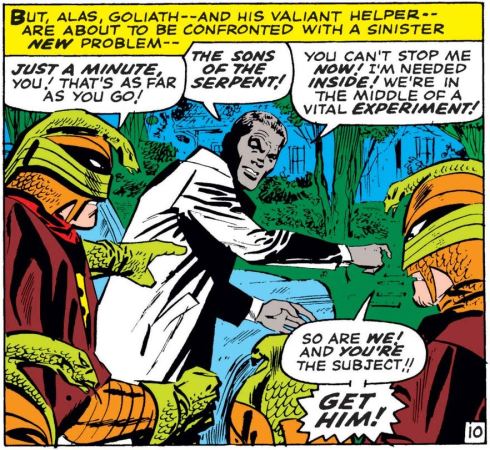 Gee, why do they think Foster’s a foreigner? Could it be their concern isn’t only with foreigners? (Imagine that.) 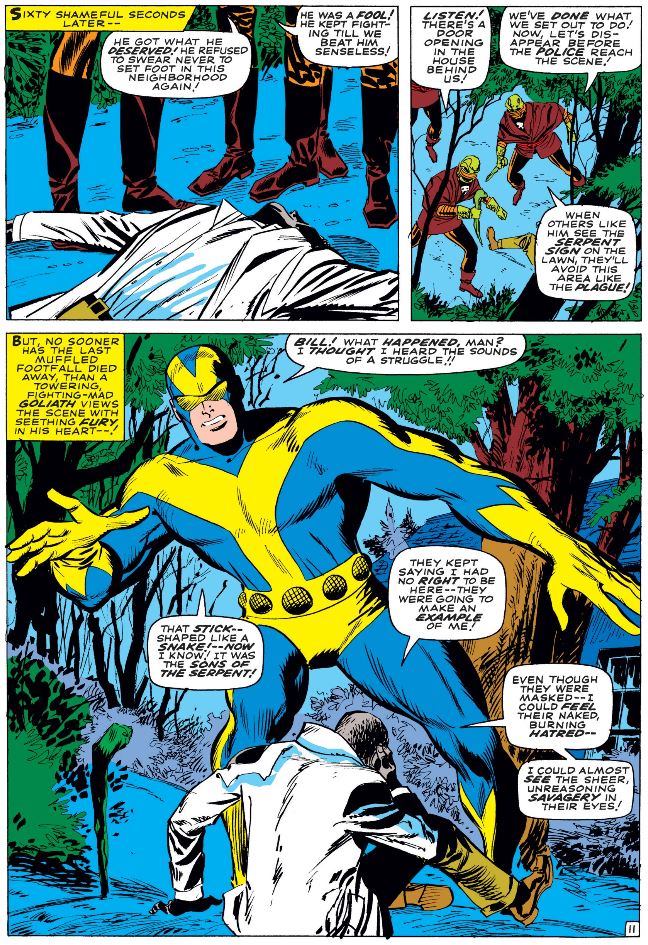 Even though Foster heroically wants to return to the experiment, Hank insists on going to the Avengers to deal with the Sons of the Serpent. 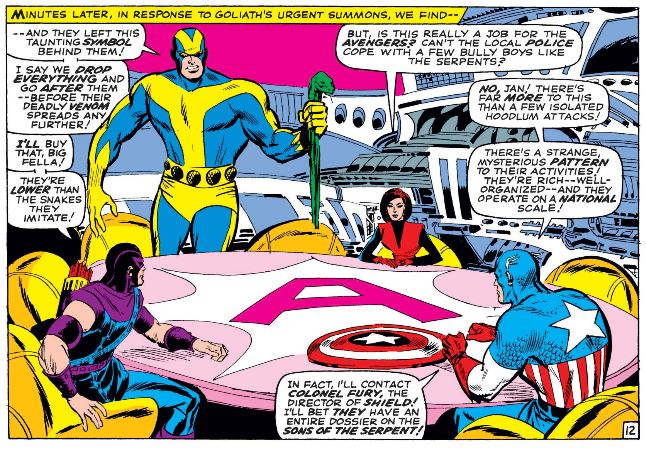 The Avengers rightfully recognize the Serpents for the scourge they are. Only Jan shows some skepticism about the scale of the problem, but Cap points out the size of the threat: “rich–well-organized–and they operate on a national scale.” 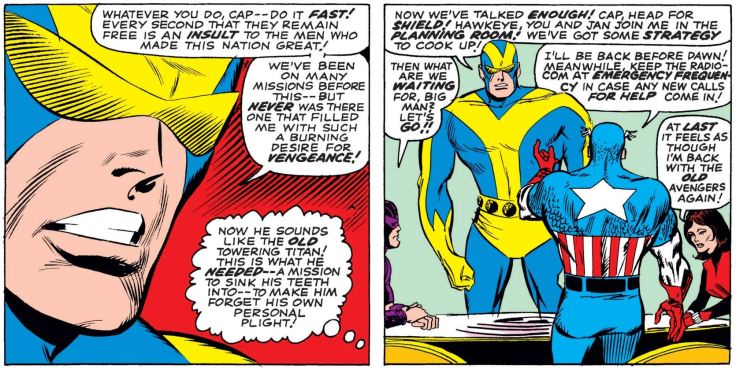 Hank takes charge, and Cap appreciates how this case, as horrible as it is, has also gotten Hank’s mind off of his own problems—and shows him that, even for a Goliath, there are bigger things to worry about. (Sorry.)

Cap pays a visit on his buddy Nick Fury, but is not greeted as warmly as he had hoped. 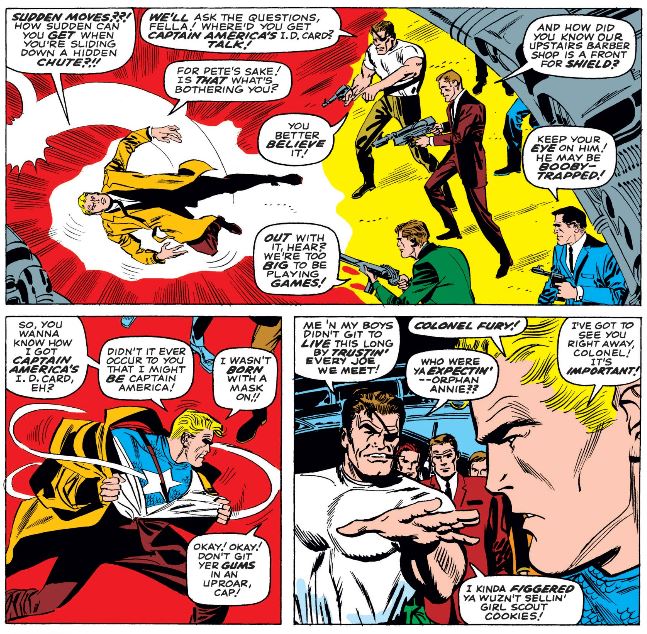 Remember that Cap still had a secret identity to some extent at this point, which he doesn’t reveal until Tales of Suspense #95 (November 1967). (To be honest, though, maintaining a secret identity was never a huge concern of his.)

Cap gets all the information S.H.I.E.L.D. has on the Sons of the Serpents, and after a mysterious ray almost hits a visiting diplomat’s car outside the United Nations, the Avengers hold a press conference to calm the audience and also warn them of the threat posted by the extremist group. 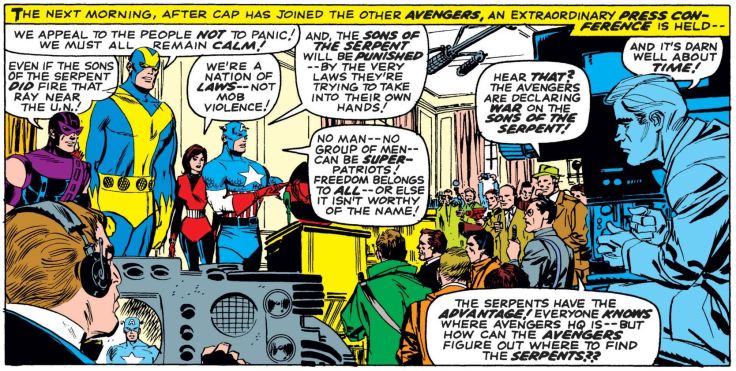 Here, Cap asserts the essential principle of equality upon which all liberal democracies (including the United States) are based: “freedom belongs to all–or else it isn’t worthy of the name.”

In response, the Serpents attack Cap, subduing and capturing him, after which they call the Avengers and demand that they ally themselves with the extremists. Hank decides to play along, and as a result, when the US attorney general calls asking for their help, Hank declines, saying they’re not sure the Sons of the Serpent are actually in the wrong. Clint disagrees, but Hank is adamant he knows what he’s doing.

Naturally, word gets out that the Avengers have sided with the Serpents…

…which emboldens them, as we see above as well as the opening splash page of issue #33. 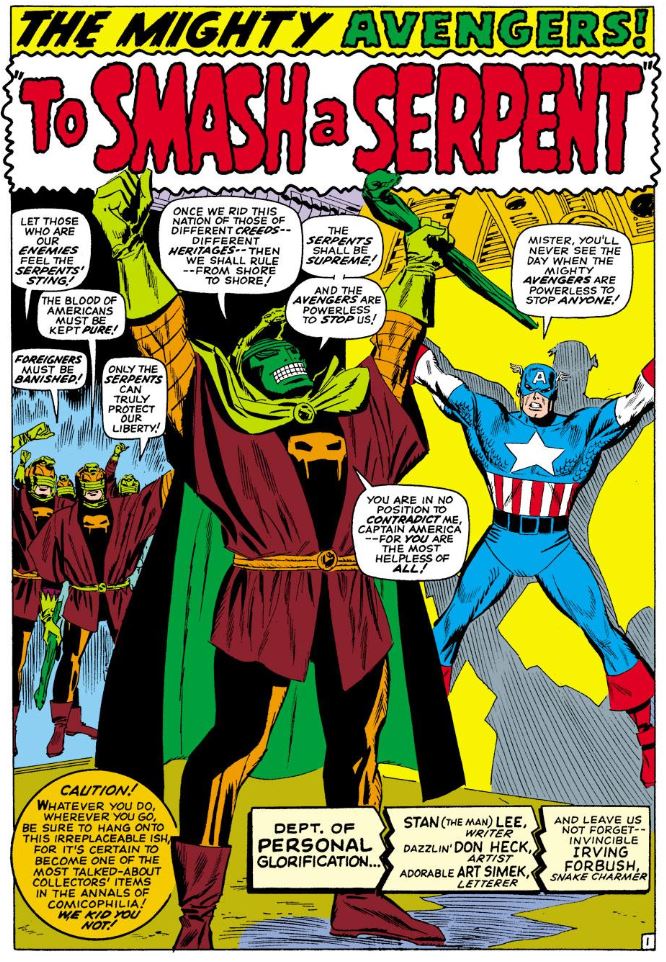 We also hear the group’s true “concerns” out of the mouth of their leader, the Supreme Serpent, himself: ridding the country of those of different “creeds” and “heritages.” Another Serpent refers to “purity” of the blood of Americans, a clear white-supremacist sentiment. Subtle they’re not, nor would they be alone today.

As he often does when faced with such hate, Cap gets defiantly eloquent, linking the Serpents’ ideology to Hitler—which, notice, the Serpent Supreme doesn’t deny—and pledging his own life to making sure it doesn’t spread. 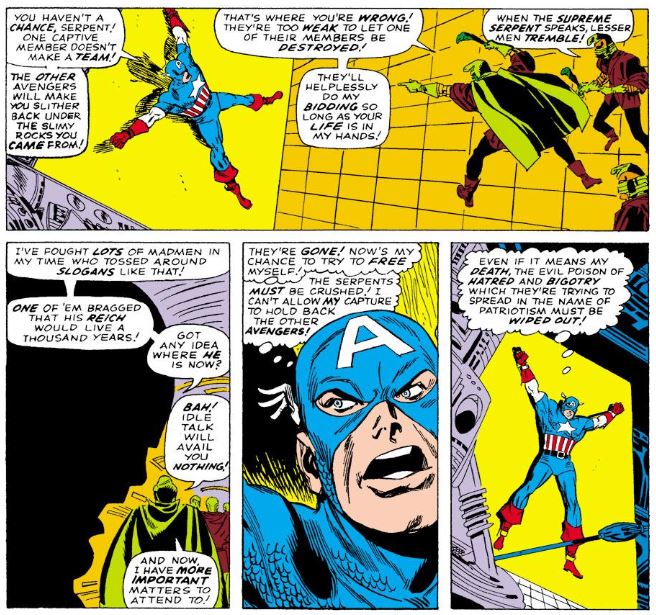 In a typical ploy of Cap’s foes (especially the Red Skull), the Serpents offer an imposter Cap to claim support for their views. (The fact that it’s an imposter isn’t revealed in the comic yet, but come on… it’s not like the Serpents have a Cosmic Cube in the form of a little girl or anything silly like that.) 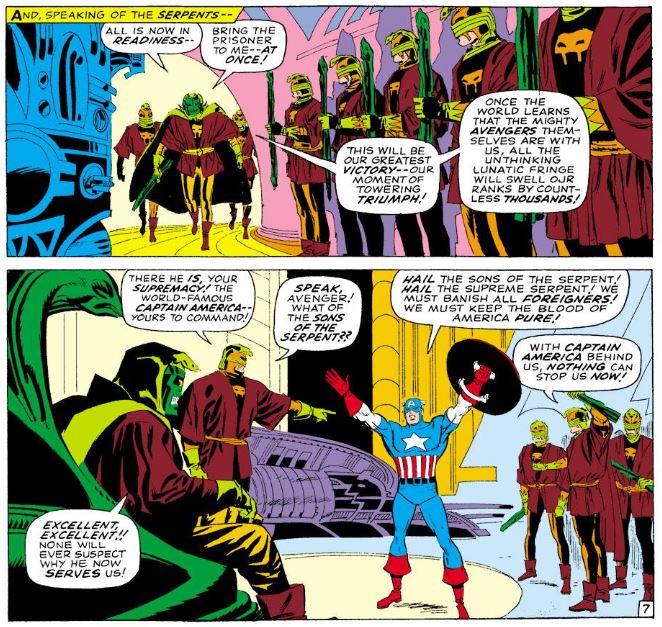 Below, we see the Serpent Supreme admit to greater goals than white supremacy, sowing hate and distrust to ease the way to taking over the country. And… what is Hank up to? 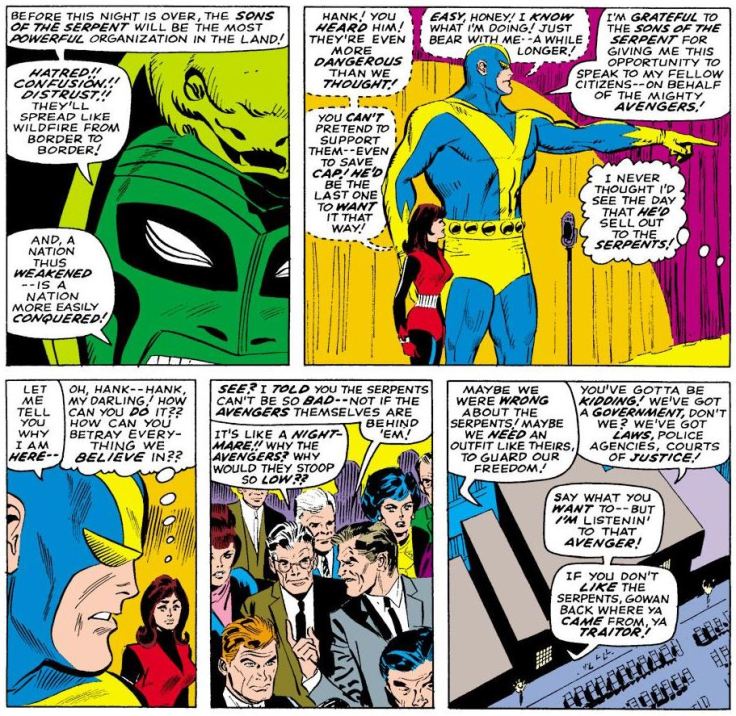 The comments from the audience in the last two panels run the gamut: some are disgusted with the Avengers’ betrayal and maintain their faith in the civic institutions of democracy, while others are convinced by the Avengers’ endorsement to side with the Serpents, believing only they will protect freedom—and declaring anyone that disagrees to be a traitor. Again, all too familiar today.

Finally, we see what Hank is up to, tricking the Serpents into giving him a national audience to reveal the truth about them and stand up for timeless democratic and liberal ideals.

The Serpents react poorly, which Hank uses to his advantage. 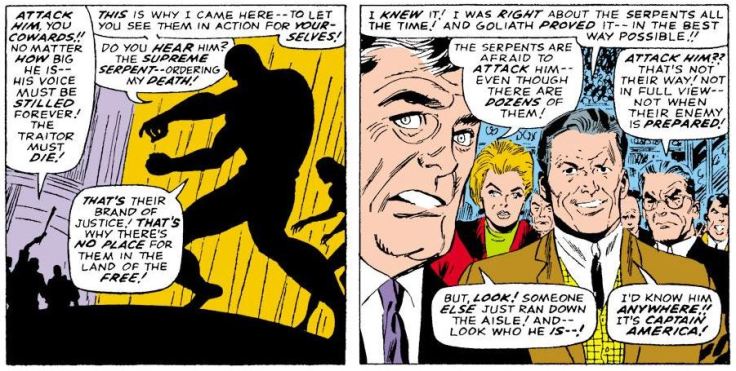 But Fake Cap steps up to declare Hank to be the real traitor, and based on the faith the American people have in what he represents, he turns the crowd once again (while silently mocking them). 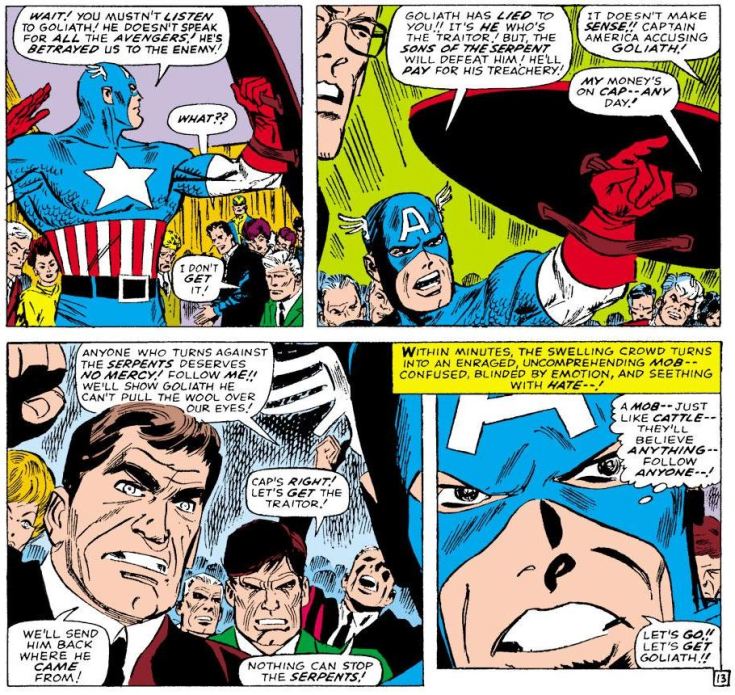 While Hank and Janet try to control the raging crowd and fight the Serpents, the leaders escape with “Cap.” Janet wonders why more Serpents haven’t shown up, to which we soon learn the answer… and a missing Avenger returns, thanks to a new ally of the team. 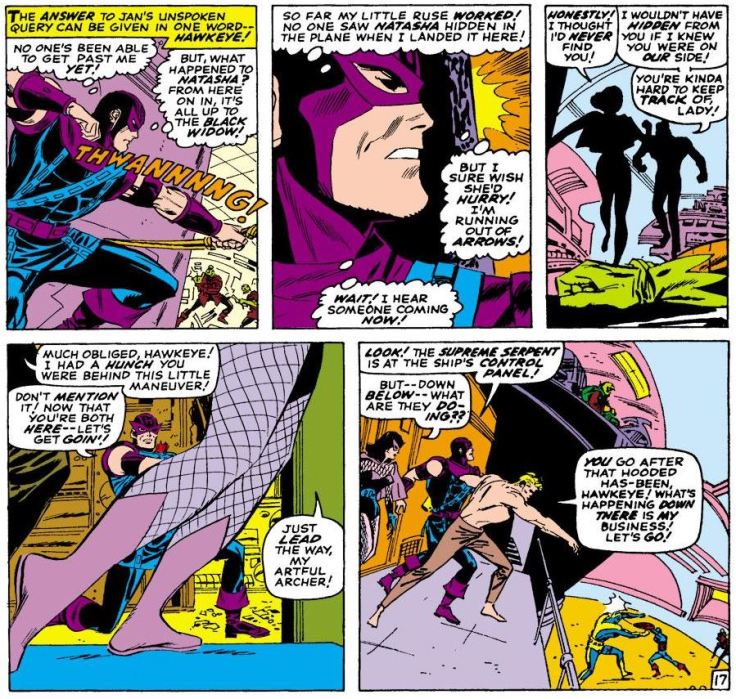 Gee, Steve Rogers returning to defeat his evil imposter… now where have we seen that recently? 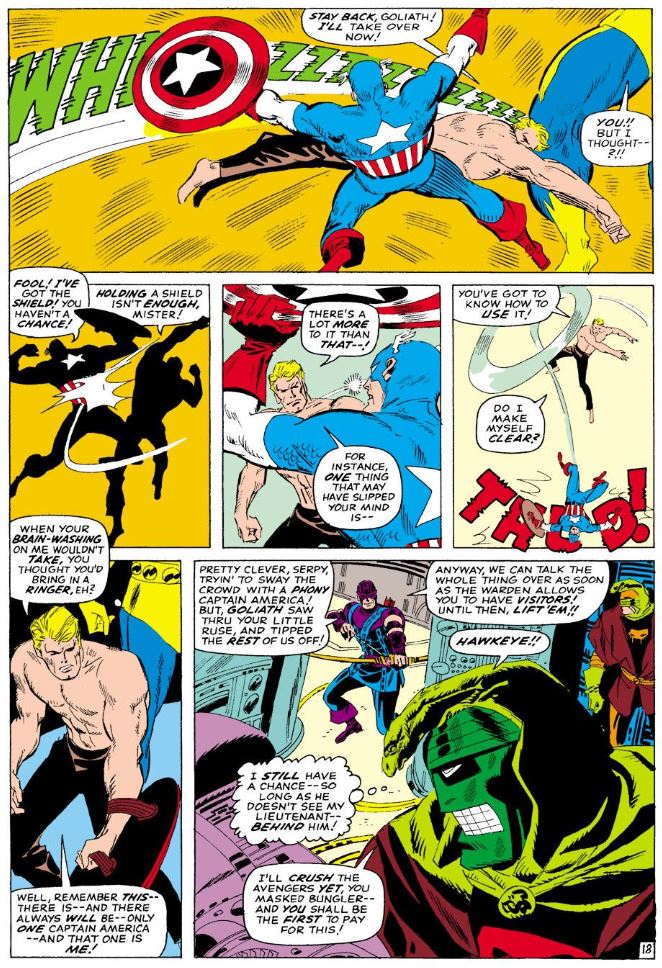 We get some trademark Cap lines here, such as merely holding the shield being less important than knowing how to use it, and there only being one Captain America… for now. (Cap faces a lot of imposters and wannabes later in his career, even before the shield passes to Bucky Barnes and Sam Wilson under more friendly, if not happier, terms. All in good time, my friends, all in good time.)

When the Supreme Serpent is caught, he turns out to be a general from a hostile East Asian country (and the diplomat whose car was almost hit by the ray outside the UN), which explains his goal of national conquest. Note his almost perfect Scooby-Doo villain line, before he reveals his strategy of divide-and-conquer by rousing hate, still popular today among some. 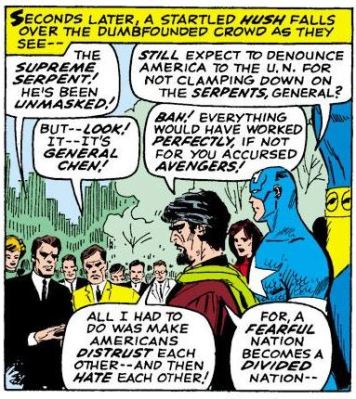 Cap affirms that the idea that the freedom of speech that allows people like the Serpents to express hate is also a strength, reflecting our courage as a nation, as well as a responsibility to respond aggressively to speech that offends our national principles.

This story was published in 1966. That it is all too relevant today, more than half a century later, is unspeakably terrible. We can do better. We must do better.

Both collected in: Avengers Epic Collection: Once an Avenger, Marvel Masterworks: The Avengers Volume Four