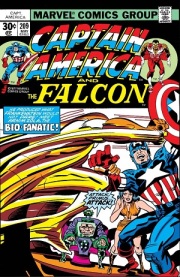 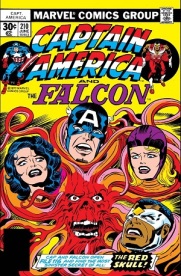 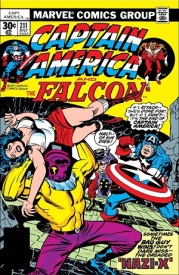 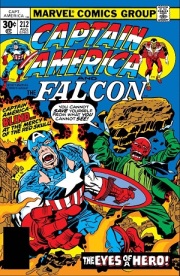 These four issues, continuing from the storyline in issues #206-208 that ended with Captain America and his new friend Donna Maria Puentes meeting Arnim Zola, brings Sharon back into the fold in a big way and also “welcomes back” a classic Cap villain with an equally classic devious plan. (Yes, I’m being coy about the details while fully aware that the covers above give most of them away.) And even though I think this is the most enjoyable story of Kirby’s run on Captain America as writer and artist, there isn’t much of relevance to this blog, so my coverage will be quick (at least until issue #212).

Issue #209 starts by reintroducing Kirby’s latest creation, Arnim Zola, “bio-fanatic,” and one of his many genetic experiments, Doughboy, who’s… well, you can see for yourself in the double-page splash below. 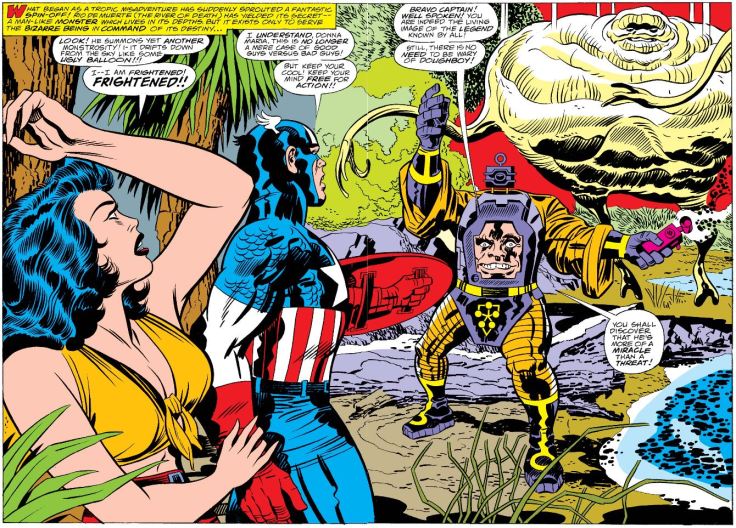 Doughboy envelops the three and transports them into space, where he eventually morphs into a flying saucer. (He later spawns a humanoid life form, Primus, who declares his sentience separate from Doughboy, until Zola orders Doughboy to reabsorb him. Primus will re-assert his independence in a later story and will record several fine albums.) 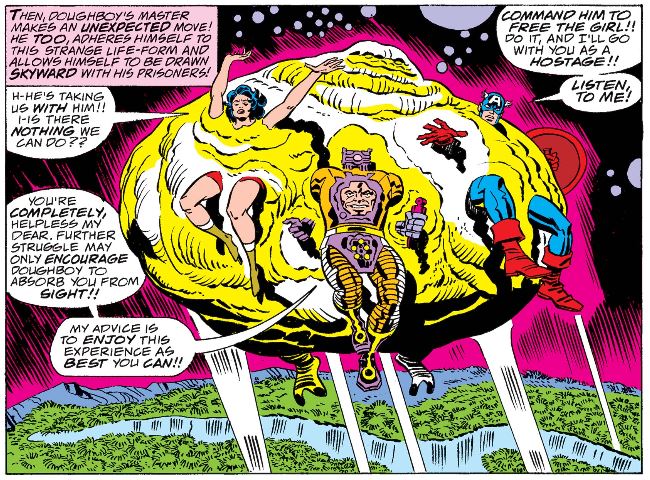 Oh yeah, Cap’s here too, nobly offering himself as a sacrifice to save Donna Maria.

The issue then turns to Sharon (who’s recovering from the gas attack which enabled the Swine’s thugs to abduct Cap in issue #206), the unnamed regional field director from S.H.I.E.L.D. trying to lure her back, and Leila trying to stop her from going. Two points for Sharon and her characterization of her former employer here! 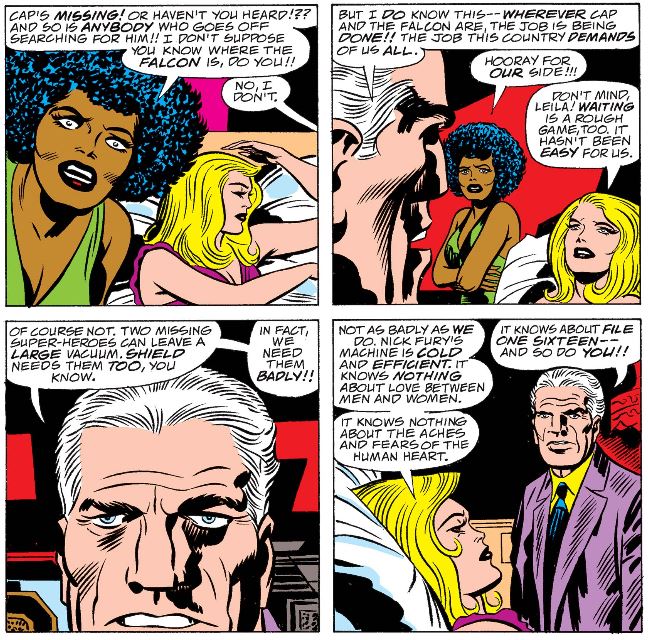 File 116 contains details on many of the monsters Zola has been creating. If you suspect that investigating this will bring Sharon and Cap back together, you deserve a cookie. (I ate ’em all, but nonetheless, you do deserve one. Take pride in that.) 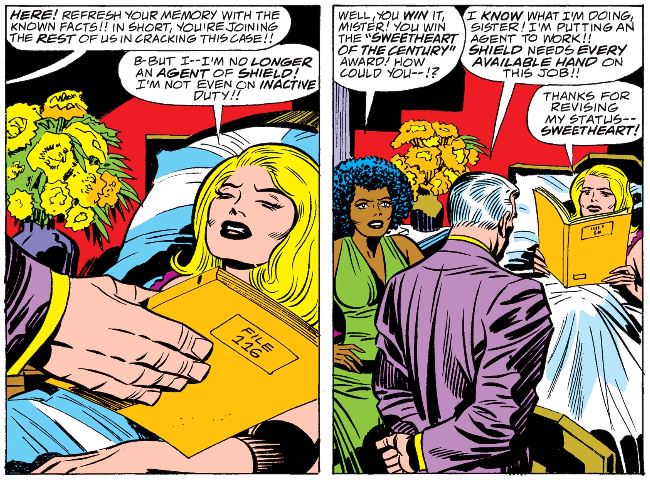 …although her reasoning is more interesting, following the “What Would Cap Do” principle, but not without more than a bit of resentment, conceding that, despite her best wishes, duty and work will always come before life and love. (Note how Leila puts the decision in a feminist frame.)

The rest of the issue sees Cap and Donna Marie face Zola and Primus inside (eww) Doughboy while the Falcon investigates File 116 as well (as he’s been doing for the last several issues, behind the scenes of this blog).

In issue #210, Cap and Donna Maria are defeated and eventually imprisoned in Zola’s mountain castle, which still has living parts. (Again, eww.) 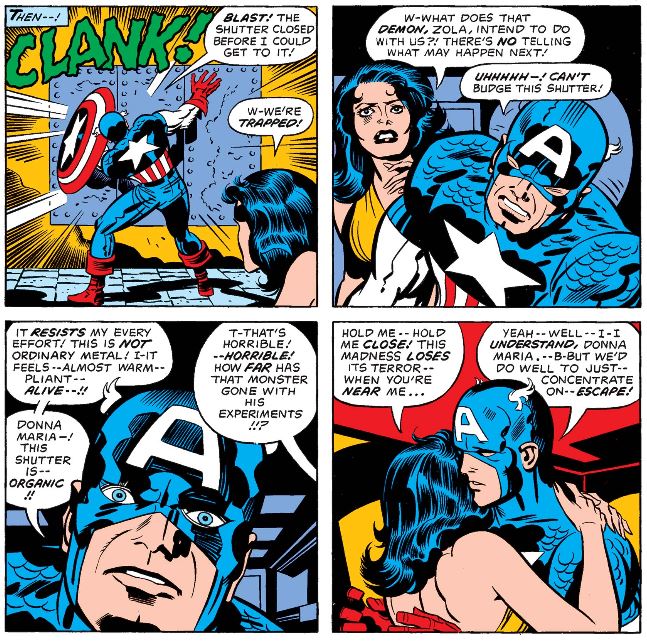 Donna Maria clings to Cap, which makes him distinctly uncomfortable, although it’s unclear if it’s for the sake of Sharon, old-fashioned chivalry, or simply the “wrong time, wrong place.” (This will not be the last time we see this type of thing, although next time it will be Cap’s doing, not Donna Maria’s.)

Also in this issue we learn who Arnim Zola’s mysterious benefactor is. (We’ll find out in the next issue where he got the money.) 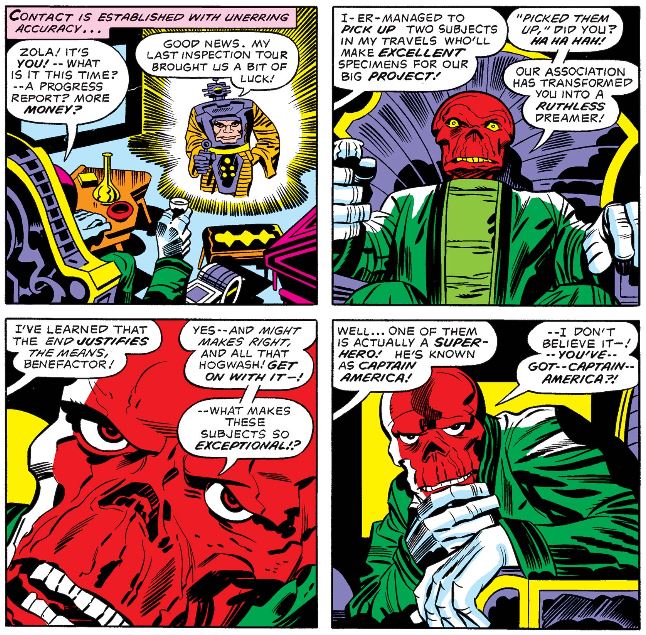 You can almost see the wheels turning in his red skull as he hatches the plan that Zola pursues in issue #211, involving another one of Zola’s creatures, a very fanciful twist on the philosophical puzzle of the brain in a vat, if by “vat” you mean an artificial body with no actual head. 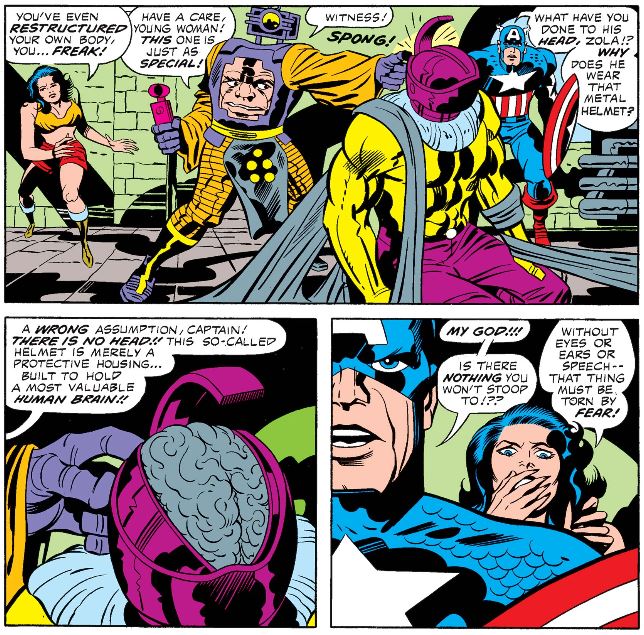 Meanwhile, Sharon has found Cyrus Fenton, a eccentric millionaire who S.H.I.E.L.D. suspects is funding the experiments in File 116, but she discovers that someone has taken Fenton’s identity (and money, to funnel to Zola). And you’ll never believe who it is! 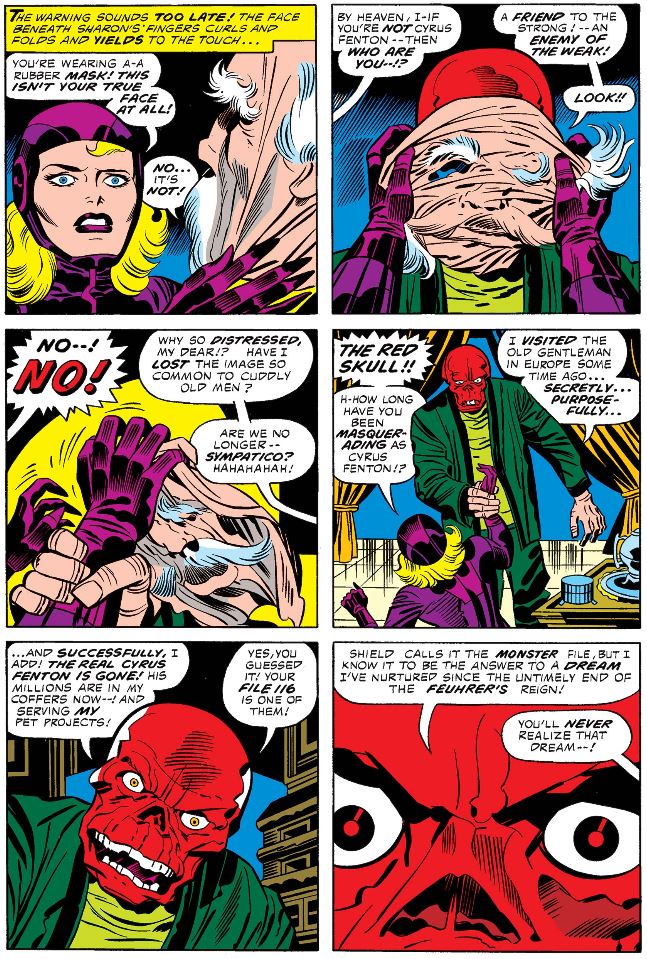 Hmm, since the end of the fuhrer’s reign, interesting… Hey, what does reign rhyme with? 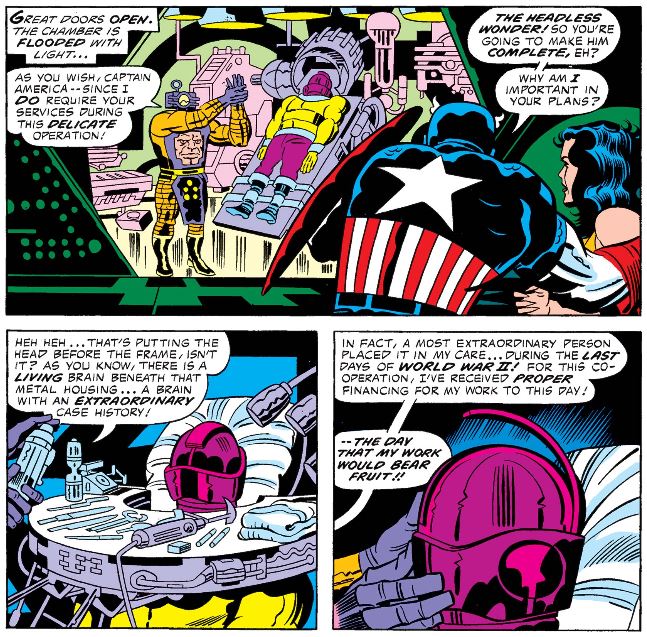 Uh oh, this doesn’t sound good. Who, I mean who, could Zola be talking about? I think Cap has it figured out. 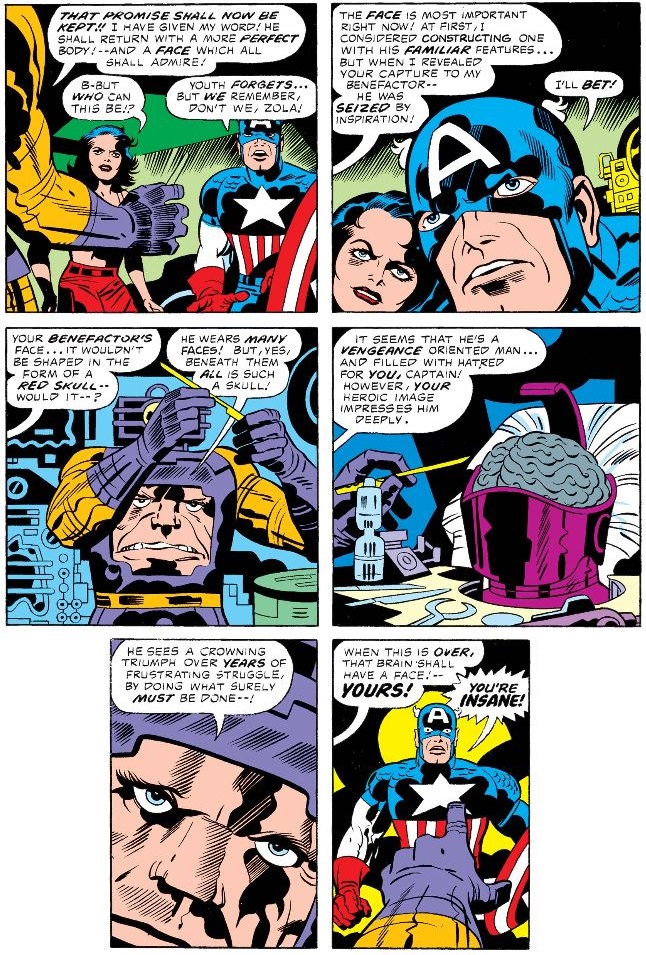 Although the blurb at the end of issue #211 says merely that the brain belongs to “a son of Satan,” the opening splash page of issue #212 makes the hints and insinuations plain. 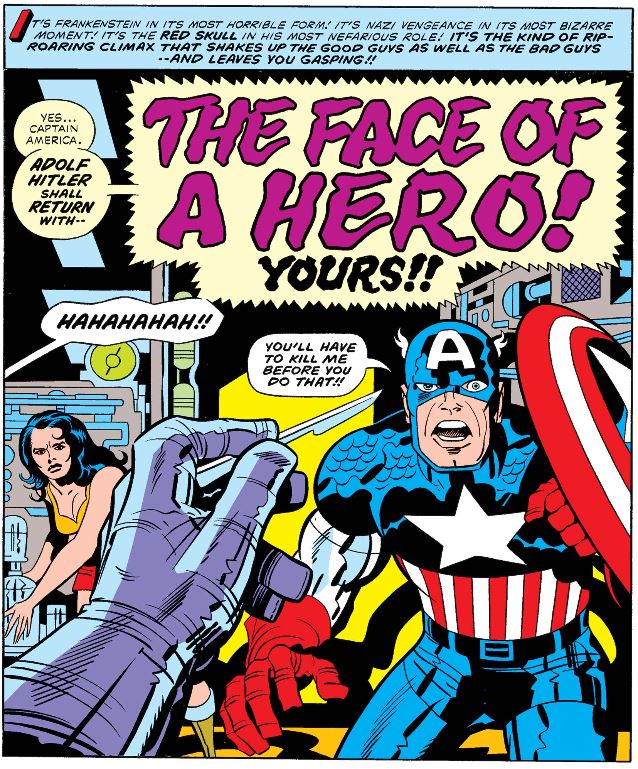 Zola shows himself to be quite the political marketer below—and funny Cap should invoke the Red Skull, who takes on Cap’s appearance himself many years later.

Before Zola has a chance to perform a brain transplant, Donna Maria takes action, and Cap goes overboard in his appreciation. 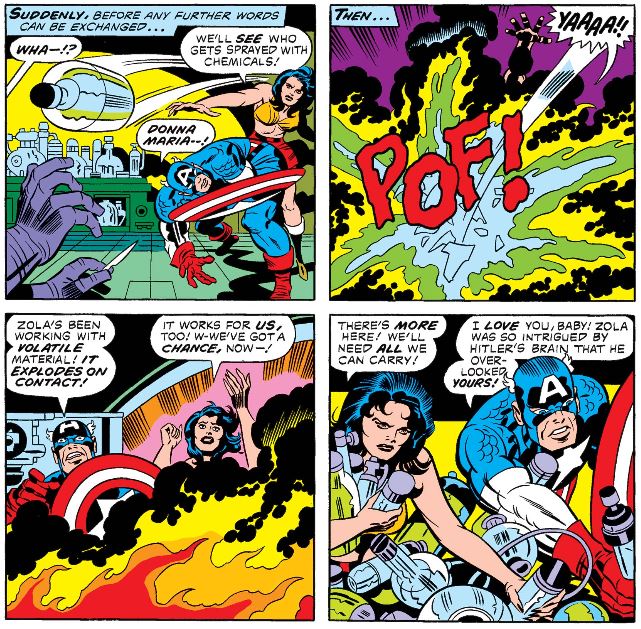 If Cap’s saying “I love you baby” makes you cringe, you’re not alone. But it does not have the same effect on Donna Maria, who sees another embrace in their future. She, unfortunately, is alone in this. 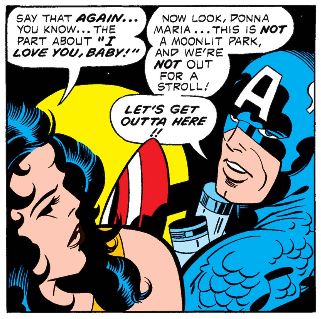 While Sharon and the Red Skull fly to Zola’s lab—the Skull promised to take her there to demonstrate his plan and show her Cap, provided she didn’t tell S.H.I.E.L.D.—Donna Maria and Cap continue to destroy it using Zola’s chemicals, as more of his creatures come to its defense. 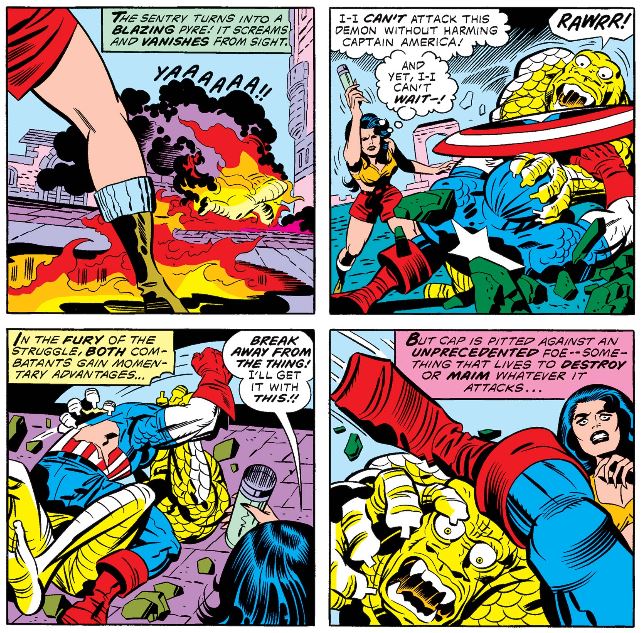 Sharon arrives just in time to save Cap, but not before he’s critically hurt (although he minimizes his injuries). 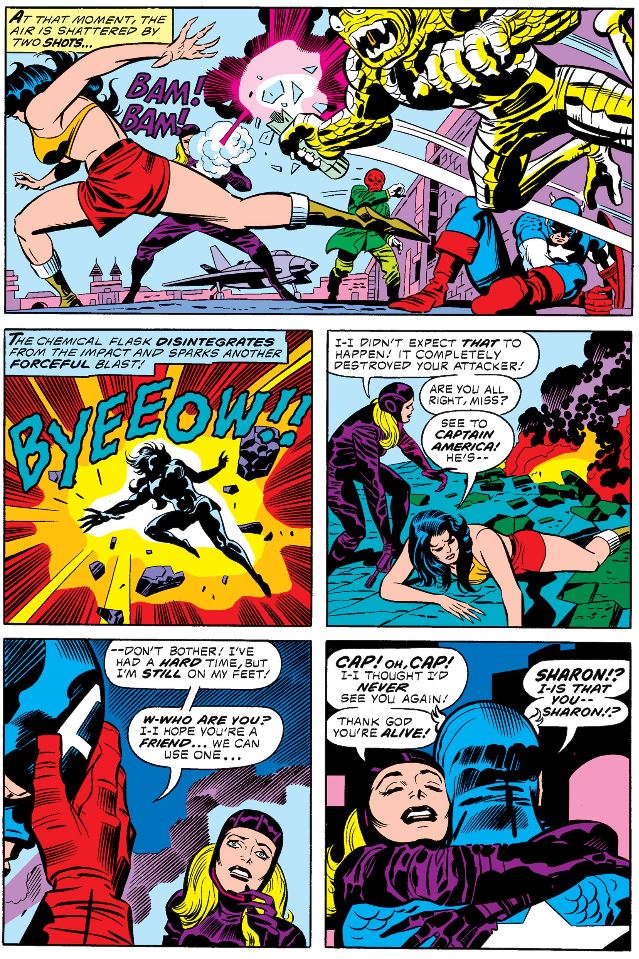 Not surprisingly, the Red Skull manages to offend the sight-impaired while he taunts Captain America—and his comment that only a Nazi could kill him in cold blood is… odd. 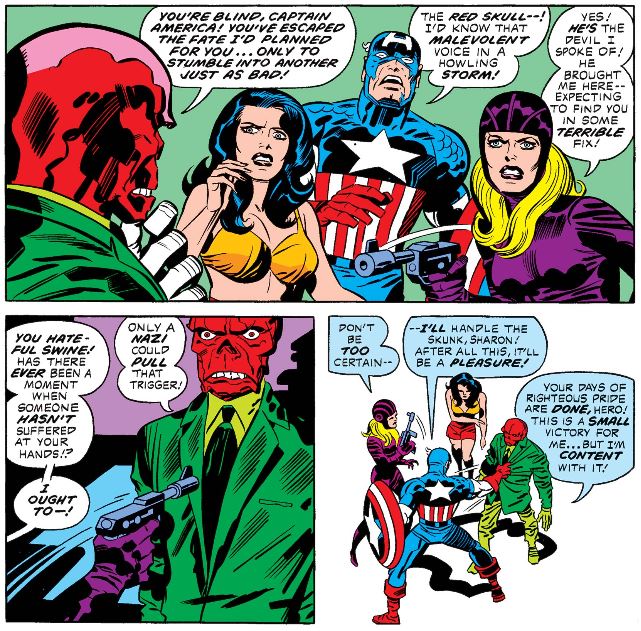 He does take advantage of Cap’s current condition to sucker-punch him, after which Cap still insists he’s OK. 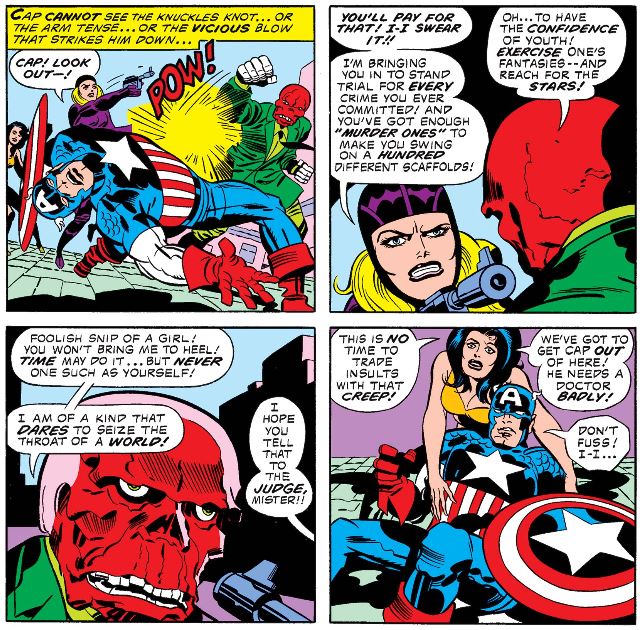 Just then, Zola’s castle explodes, and Cap urges Sharon and Donna Maria to save themselves, while Red Skull clutches Cap in an embrace much less affectionate than Donna Maria’s… but just as short-lived. 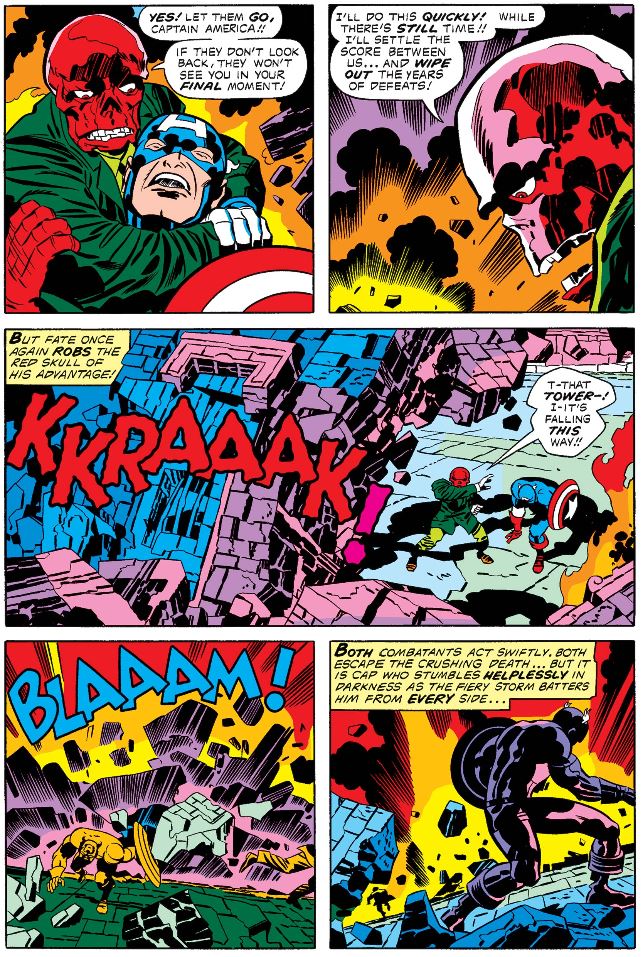 Of course, the Red Skull survives (as does Arnim Zola), and S.H.I.E.L.D. shows up just in the Nick of time (having followed Sharon’s homing device, which the Red Skull apparently never thought of). They take our three heroes home in choppers, with things looking bleak for Cap—a situation which continues into the next story, the last of Kirby’s 70s run on Captain America. (Sadly, Donna Maria is seen no more in this title, but does show up many years later, first in Avengers and later in Captain America.)