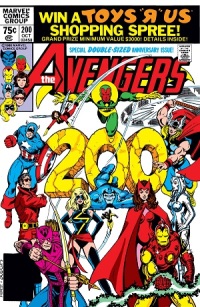 As mentioned in the last post, Avengers #200 is very controversial (and rightfully so), and even though Captain America has little to do directly with the controversy itself, the issue merits its own post, with copious links to more thorough treatments below. (Warning: There is discussion of sexual violence later in this post.)

The main focus of the issue is Ms. Marvel’s mysterious and supernatural pregnancy, as revealed in issue #197 and discovered by most of the team at the end of issue #199 (see the last post). 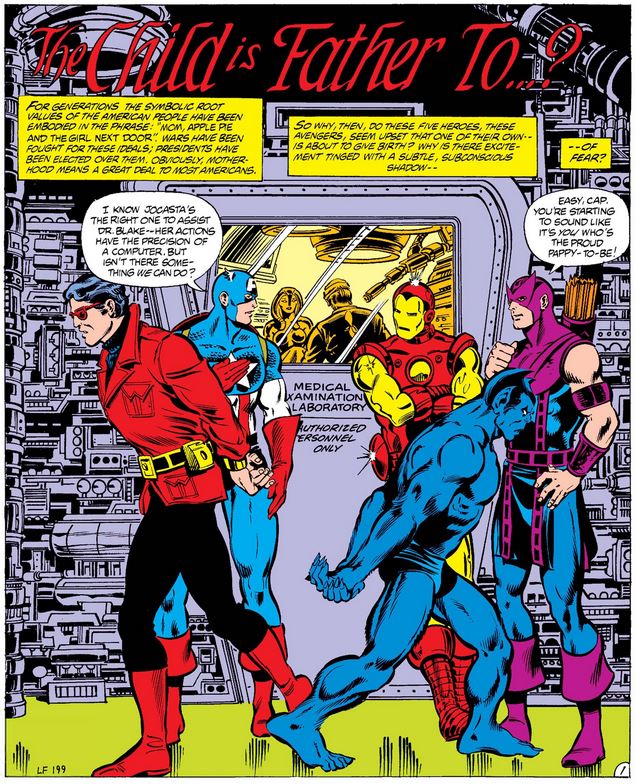 The unique situation is recapped below… 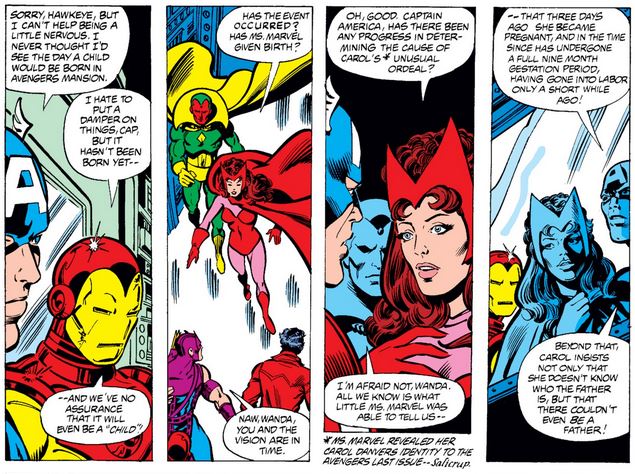 …and shortly after the child is born, he starts aging very quickly, proclaiming his name to be Marcus and speaking refined English within hours. Cap tries to get some answers out of him, but when the boy is honest and sincere about the circumstances of his conception, Cap suspects the youngster is giving him sass.

Ms. Marvel is understandably ambivalent about seeing the child that was implanted in her without her knowledge or consent, but when she finally sees Marcus—now fully grown with a perfectly trimmed goatee—her reaction is… disturbing. 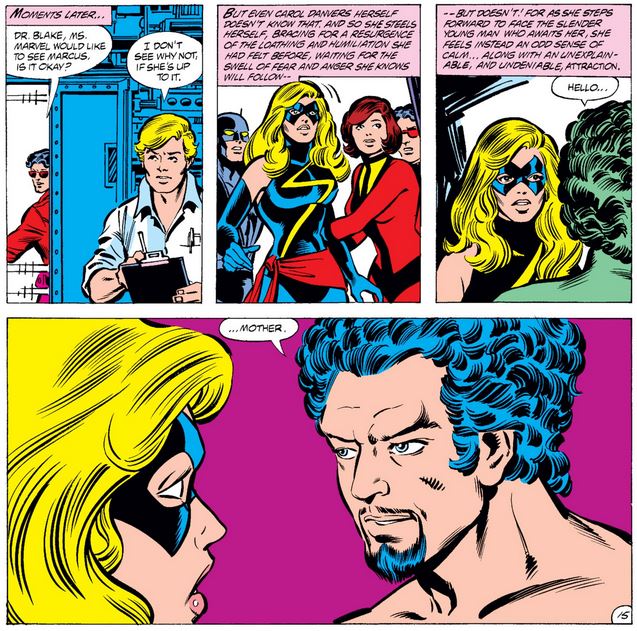 But this strange meeting of mother and son is interrupted by more traditional comic book fare as some temporal tomfoolery has brought threats from several different eras to bear on New York circa 1980. 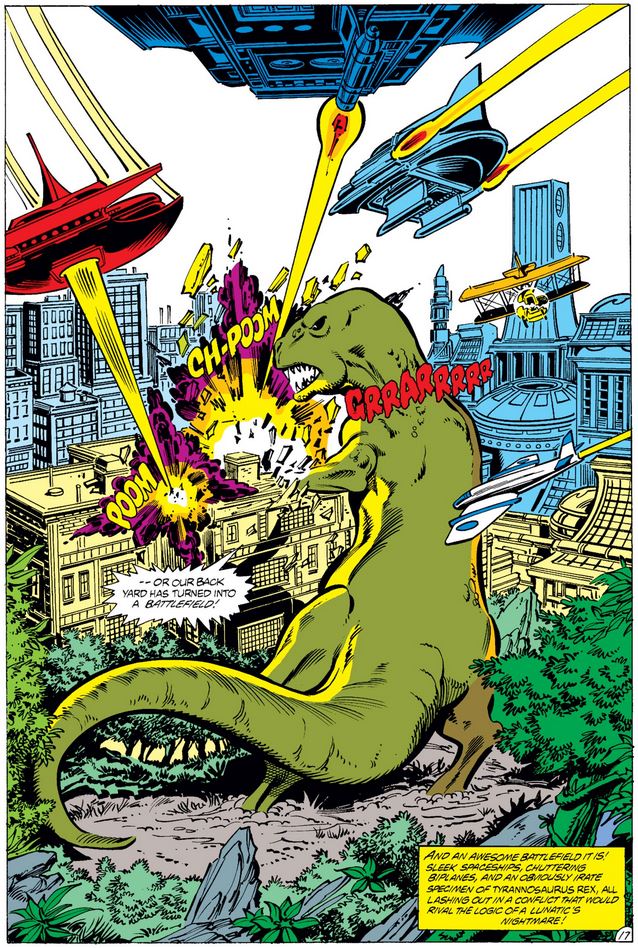 Even while they battle the various threats from across time—which we’ve already seen Marcus as much as admit to causing—Cap refuses to blame him without more evidence, which is admirably fair but perhaps a little naive…

…although, again, his heart is in the right place concerning protecting the innocent.

The controversy with this issue arises when Marcus reveals that he is the son of Immortus, raised in a limbo dimension but wanting to be “reborn” on Earth. He needed an extraordinarily strong woman to do this, so he found Ms. Marvel and, after feeble unsuccessful attempts at seduction, raped her, becoming his own father.

To make matters even worse, after he admits to all of this, Carol decides to leave Earth to have a relationship with him in limbo, to the surprise but not objection from her three teammates present.

Cap is still fighting the native Americans with Beast when Marcus and Carol disappear, leaving us to wonder if he would have said anything different before they left. 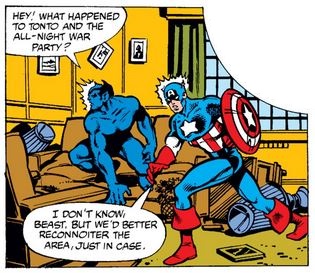 Marcus’s rape of Carol Danvers, followed by her decision to be with him nonetheless, generated an immediate response from readers, most prominently from Carol A. Strickland in an article titled “The Rape of Ms. Marvel” in the comics magazine FOC. As detailed by Brian Cronin at CBR here, this inspired writer Chris Claremont to address the story a year later in Avengers Annual #10, Carol’s first appearance since Avengers #200. Note, in particular, her pain and righteous anger at her former teammates’ behavior during the entire episode. 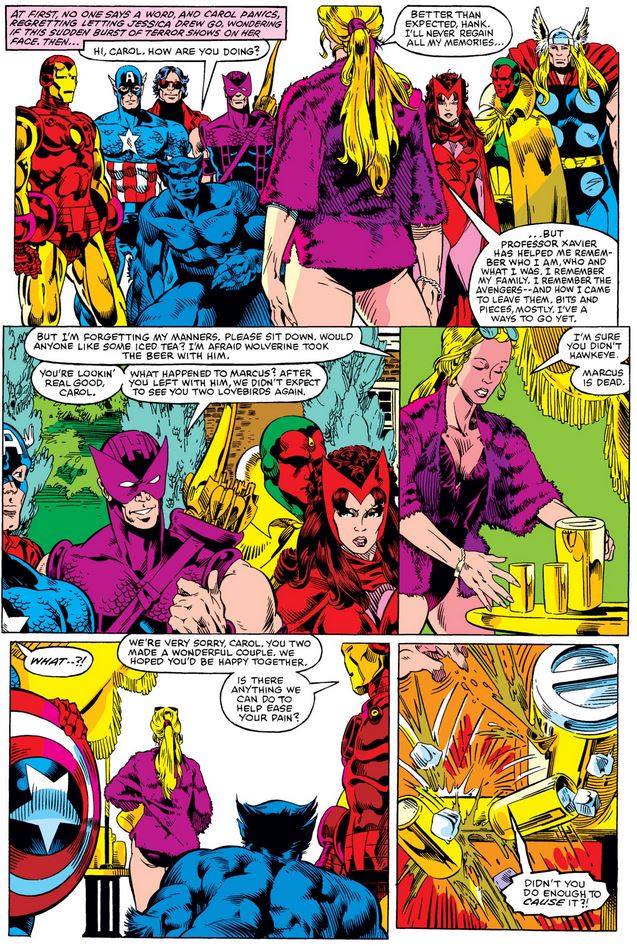 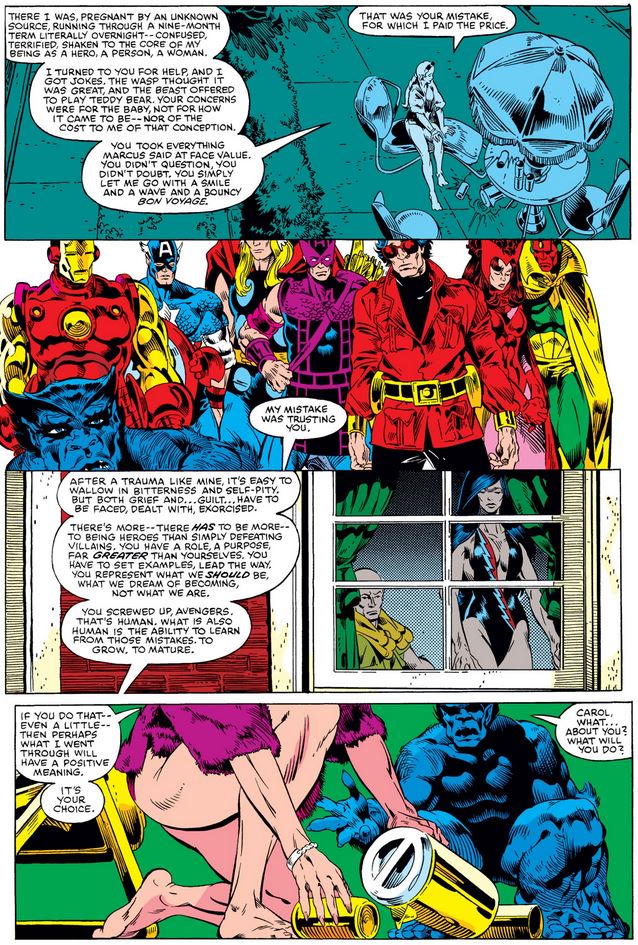 For more recent critical commentary on this storyline, which received significent renewed attention ahead of the Captain Marvel movie, see the following articles (just a selection of the many pieces written about it):

“On the Rape of Ms. Marvel” by Mega Westgarth (Geek Insider)

And for what’s it’s worth, here are editor and co-plotter Jim Shooter’s comments on the issue, in which he admits that “Avengers #200 is a travesty.”

UPDATE (December 2020): There is a recent academic journal article that addresses some of the themes in these two comics.

ABSTRACT: The conspicuous absence of trauma in superhero narratives is an established trope. In Avengers #200, the character Carol Danvers (aka Ms. Marvel) was subjected to a sexual assault that was characterised as non-violent, non-traumatic and even as an act of love. Chris Claremont, who had written the Carol Danvers character years prior, objected to this treatment of the character and recontextualized Carol’s assault as rape in Avengers Annual #10. A large part of this recontextualization involved the portrayal of long-term psychological trauma in Carol’s life. This symbolic thread carries into Uncanny X-men #236, titled ‘Busting Loose’ (also by Claremont), where the superheroine Rogue temporarily loses her superpowers and is then subjected to an off-panel sexual assault. Her response is to turn her consciousness over to Ms. Marvel (whose psyche now shares Rogue’s body). The story that unfolds from there draws upon the historical symbolism of Ms. Marvel and advances the recontextualization of Carol Danvers by portraying a post-traumatic dissociation followed by a reclamation of power and agency through community and disclosure, allowing the Carol character to redress, to some degree, the problematic historical excision of trauma from superhero narratives that deal with sexual violence.

If you or someone you love has been the victim of sexual assault, please contact the National Sexual Assault Telephone Hotline at 1-800-656-HOPE (4673).

Collected in: Marvel Masterworks: The Avengers Volume Nineteen and Ms. Marvel Epic Collection: The Woman Who Fell to Earth