This issue concludes the story begun in the last issue in which Captain America returned to England to reunite with Lord Fallsworth (the original Union Jack from World War I) and Jackie Fallsworth (Spitfire from Cap’s WWII team, the Invaders) to investigate mysterious murders that turned out to be the work of Lord Fallsworth’s archfoe (and brother), the vampire Baron Blood, long thought deceased.

When we last saw Cap, he was… well, you can see for yourself in the opening splash page below. 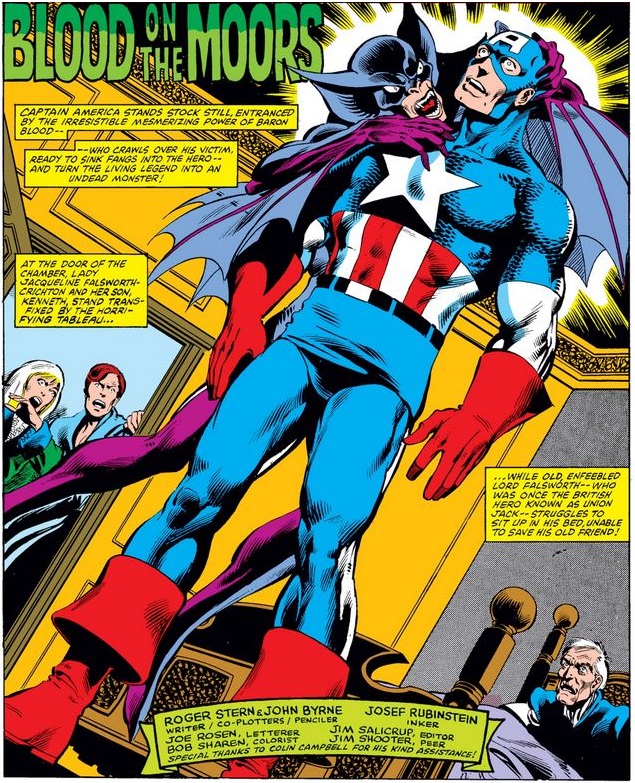 Not all artists draw all the little bumps on the upper part of Cap’s costume… but Cap should be grateful that John Byrne and Josef Rubinstein included them in this issue!

Cap reverts to his trademark defiant stance quickly, and then shows the judo skills he used against Baron Blood in the last issue (and more often earlier in his modern-day career).

Jackie’s son Kenneth joins the fight only to be captured by Baron Blood and tossed back at Cap, who catches the young man despite the strategic risk to himself. 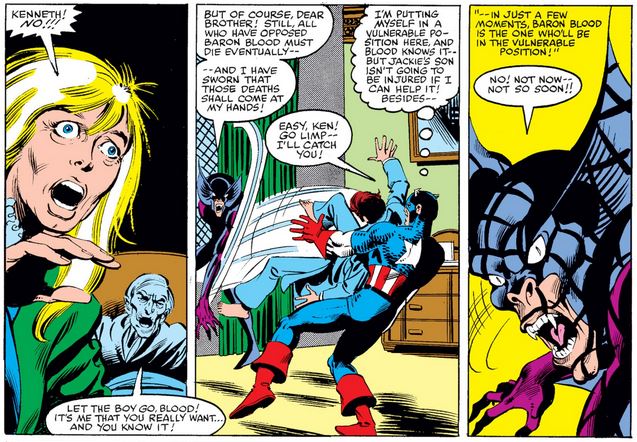 As the man sang, “here comes the sun,” and Blood retreats with Cap leaping after him, only saving himself with a bit of emergency gymnastics that would make Daredevil (and maybe even Dick Grayson) jealous.

(He might have lost a point on the landing because both feet didn’t land at the same time, but it’s OK.)

After the threat has passed, Cap and his friends take a breath, only to see Kenneth’s friend Joey Chapman emerge like Clark Kent after Superman leaves…

…but it seems Cap only suspects him on being a Renfield, not a Dracula. That doesn’t prevent him from smacking Joey around a bit, mostly defensively, though it seems odd that Cap would diminish an “art school tough,” given his own current career (or Joey’s wrestling experience, mentioned in the last issue).

After Cap lets him go, Joey gets the full Fallsworth family history from Kenneth, including the third Union Jack who could have been. (But might still be, for all we know… keep reading!)

Joey Chapman is not Baron Blood, but someone we met before is… 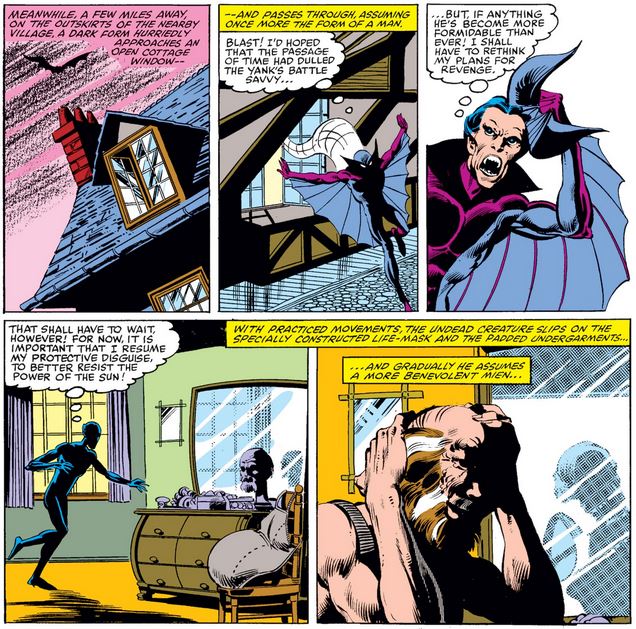 …Doctor Cromwell, who behaved very strangely with Cap in the last issue. (This will be important soon.)

Soon, the local authorities join Cap and the Farnsworths in a war council, with both Kenneth and Joey pledging their help, and Lord Farnsworth desperately wanting to join the battle.

You almost get the feeling a torch is about to be passed, don’t you?

But let’s return to Brooklyn for a moment, where Steve Rogers left his new friend Bernie Rosenthal smarting after running out on their date in the last issue. She and their neighbor Anna Kapplebaum take care of his apartment, with Bernie fielding his calls while Anna teases and makes wedding plans.

Back in England, Cap returns to Fallsworth Manor from sleuthing to find the lord of the manor dressed for battle—and his daughter thinking of it too, however briefly.

Cap finds himself between father and daughter, but before he can intervene, fate does it for him.

Who should arrive to tend to Lord Fallsworth but Doctor Cromwell…

…who waits until he’s alone with his brother to reveal his true identity and explain his resurrection.

Wait, did I say his brother? Turns out this is not the Union Jack he was looking for.

Cap bursts in to help, double-teaming with this new Union Jack while explaining (kind of) how they deduced that Cromwell was not who he seemed—although I think Cap’s failure to recognize him from the war in the last issue was a big part of it (because he never forgets a fellow soldier). 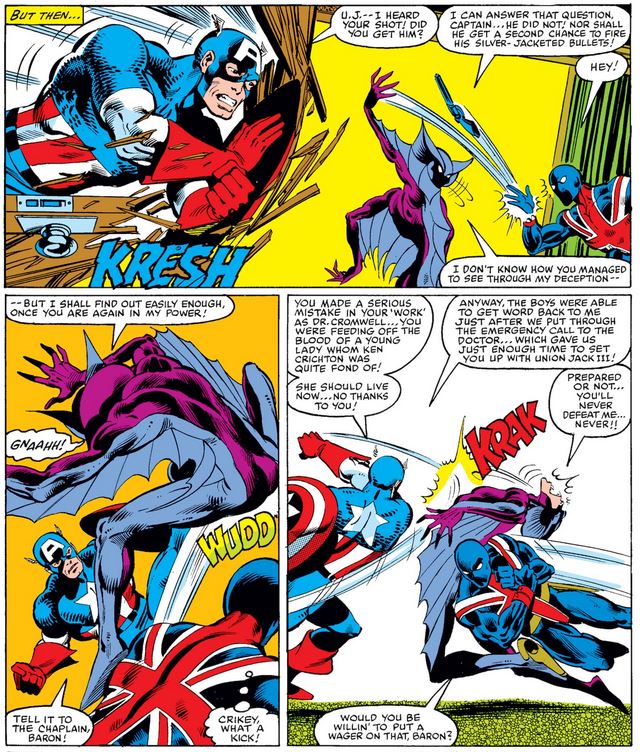 Blood flees again, but Cap stops him with the same trick he used to stop the liquor store burglar in the last issue.

After Blood attacks the young Union Jack, Cap once again uses our friend the sun against him…

…and launches into a bit of speechifying that seems more appropriate when fighting a more ideological foe such as the Red Skull. (But it’s nice to hear nonetheless!) 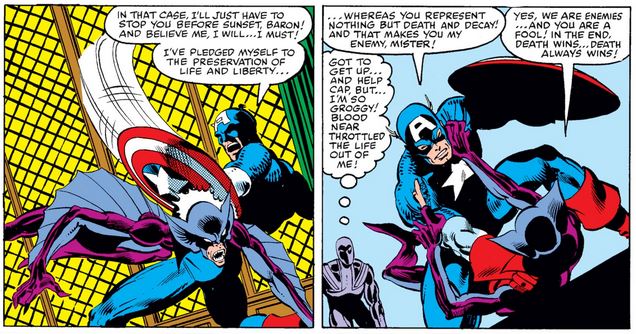 Maybe Cap said those words to psych himself up to do what he does next, especially as the sun sets and Blood strengthens. (Cap’s agony as he accepts what he has to do, not to mention the act itself, is expertly illustrated by John Byrne and Josef Rubinstein.)

Even though Baron Blood was no longer human, and not technically alive, Cap still resists ending his “life” until he truly had no other choice, and still regrets having to do it.

While Cap takes a moment to reconcile himself with what he has done, our new Union Jack reveals himself… 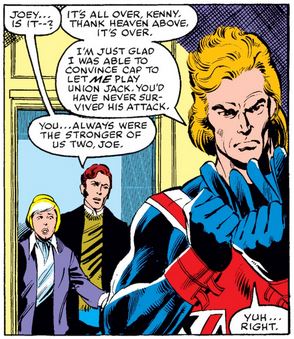 …and recognizes that Cap needs some time.

As our heroes destroy the final remains of Baron Blood, one of their own also leaves this world… 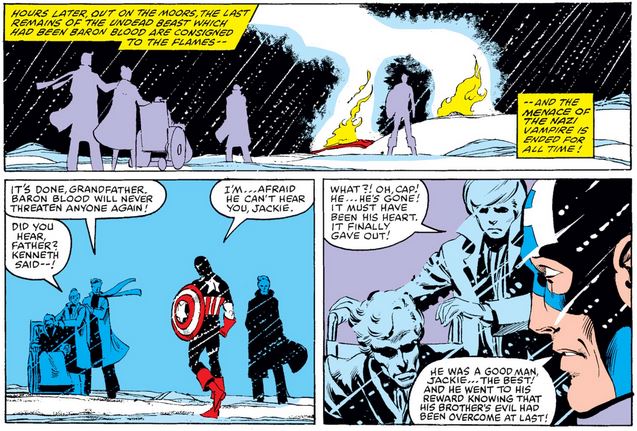 …and Cap has one more reason to mourn.

Here’s to the original Union Jack!