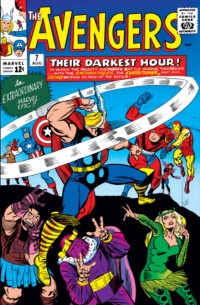 In this issue we see a Captain America not at his best, as he is rattled at a vision of his fallen partner, is duped by Zemo and his amazing friends, and once again expresses his desire for vengeance. This is a more emotional Cap then we’re used to seeing, but as I explain, it’s understandable and quite perceptive of Stan and Jack to include this side of Cap, at least in these early days.

The issue starts with the first “special board of inquiry session” of the Avengers to deal with the cataclysmic fallout from Tales of Suspense #56 (of the same month) when Tony Stark “chose to ignore a call” to join the group on a case. 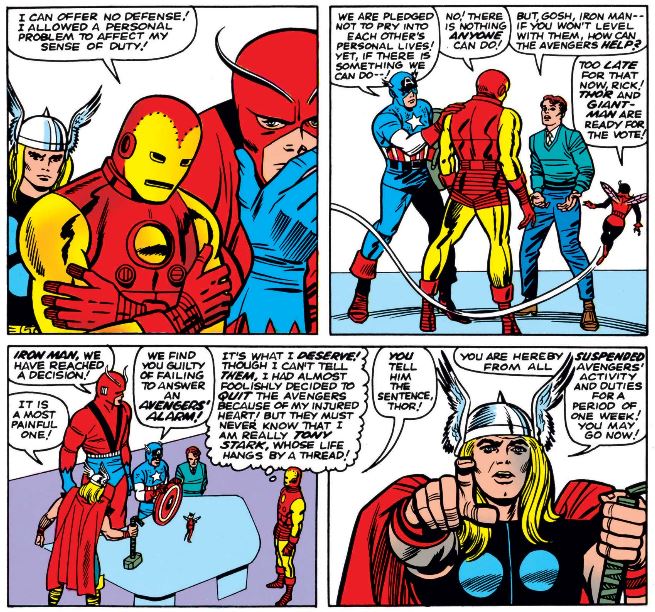 All the Avengers are firm but sympathetic with Iron Man, especially Captain America, who reaches out—literally and figuratively—to offer help, before pronouncing the defendant guilty. Thor issues “the sentence”: one week standing in the corner. (Other notable disciplinary actions such as this involved Hank Pym in Avengers, vol. 1, #213 and Carol Danvers in Avengers, vol. 3, #7. Just wait, we’ll get there eventually!)

Note Iron Man’s admission that he “allowed a personal problem to affect his sense of duty.” It’s nice to see that, this early in his career, he still had one… or does he? Wait until he sees his pals in trouble on the television set… 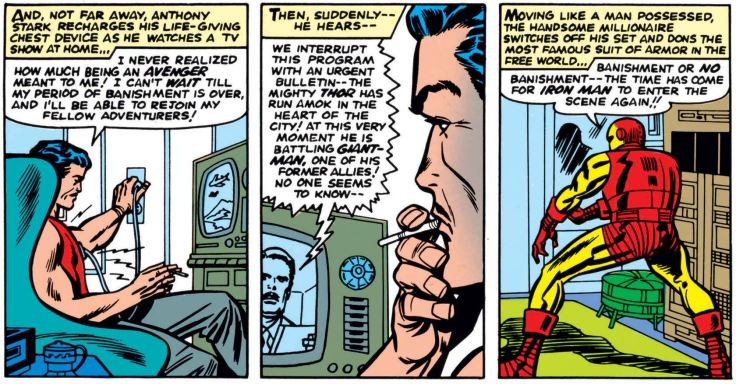 As noted in the post about Avengers #4, most issues following Cap’s defrosting had at least one page featuring his fighting prowess against a half-dozen fellas twice his size… and this issue is no exception. 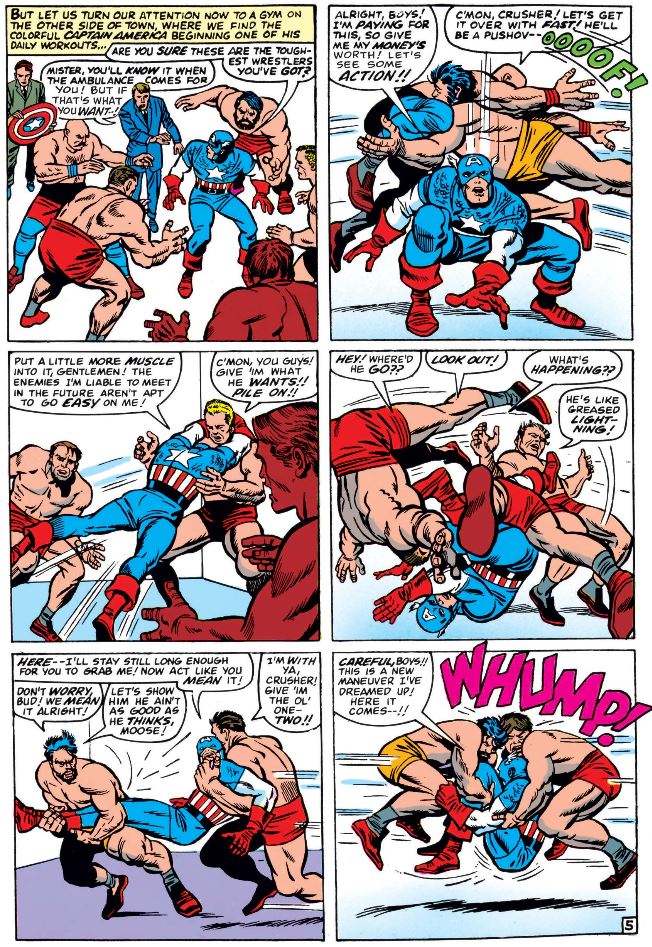 Another ongoing subplot from these early Avengers issues is Cap’s grief over the loss of Bucky and his tentative plans to train Rick Jones to be his new partner. While Cap has wavered since meeting the lad, Rick’s stunt in this issue—performed just as Cap is in the middle of his angst—definitely pushes the Star-Spangled Avenger too far. 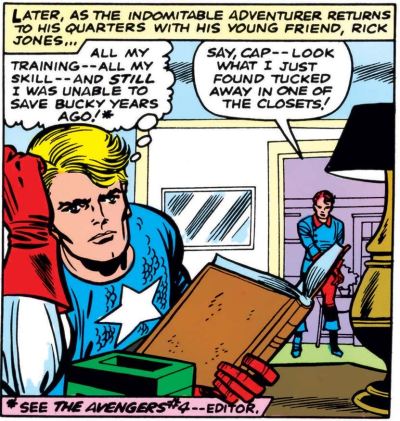 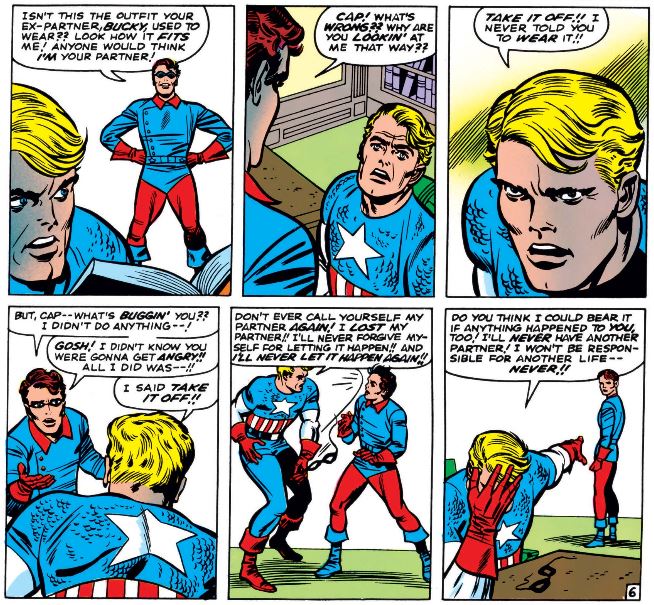 Despite his earlier training sessions with Rick and his young pals, for the first time we see Cap shocked to the realization of what another partner would mean, and he explicitly refuses to “be responsible for another life.” A certain caped crusader has also faced the same issues and wavered in his resolve not to repeat his mistakes… and we will see later than Cap fares about as well in his “no partners” rule. (Hi Sam!)

Unfortunately, this episode also triggers Cap’s “hunger for revenge” against Baron Zemo, which is a decidedly unvirtuous trait we discussed in the context of the last issue. “Finding him” is fine, but “making him pay,” not so much—and one wonders how much this impulse was triggered by the shock of seeing Rick in Bucky’s outfit, one intense emotional state helping to enable another. 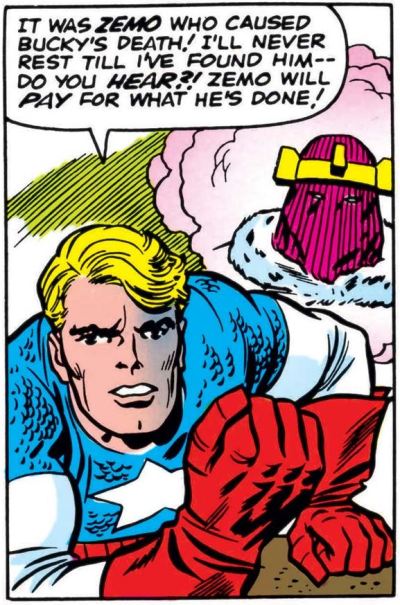 It would seem this emotional state also made Cap susceptible to being caught by surprise by one of Zemo’s associates (actually the Executioner in disguise, which only compounds Cap’s mistake)… 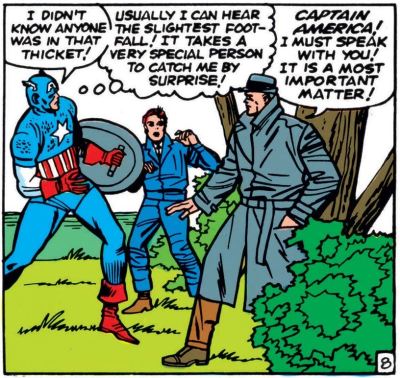 …and losing his temper, and falling for Zemo’s trap (for which the Executioner was the lure) and rushing into it alone. 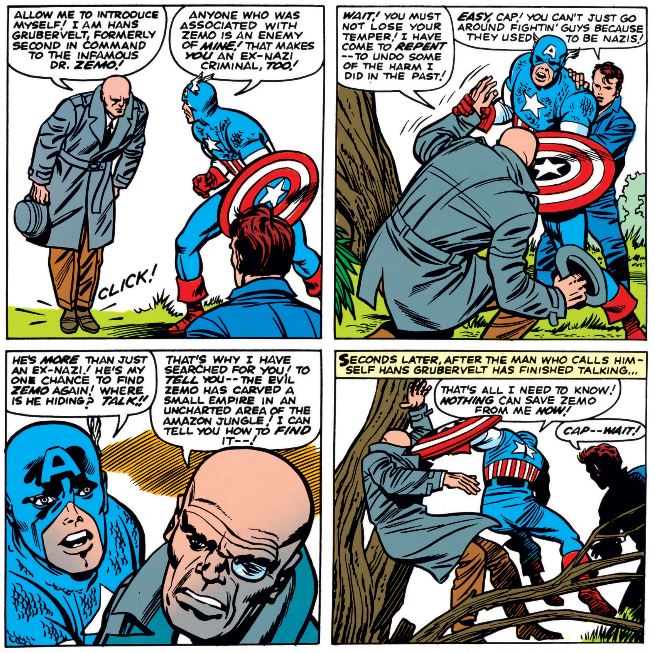 (“You can’t go around fightin’ guys because they used to be Nazis”… oh there’s an essay waiting to be written there!)

It’s striking but not surprising how easily manipulated and set off Cap is at this point, given the trauma he’s recently experienced, from his reawakening in a new era and the death of his partner that, to him, just happened a few days earlier. This is far from the steadfast and impenetrable will that we associate with Captain America now, but it is very appropriate at this stage, and as I said at the top of the post, rather insightful for Lee and Kirby to work this into the character from the beginning.

SKILL AND TIMING UNDER PRESSURE

On his way into the Amazon to find Zemo, Cap jumps out of a plane—unlike the second Cap movie, this time with a parachute—until he faces a gas-filled missile, courtesy of Zemo himself. Cap displays his skill, “twisting his supple body like an aerialist in flight” and showing his “split-second timing” to make the landing (albeit a hard one). 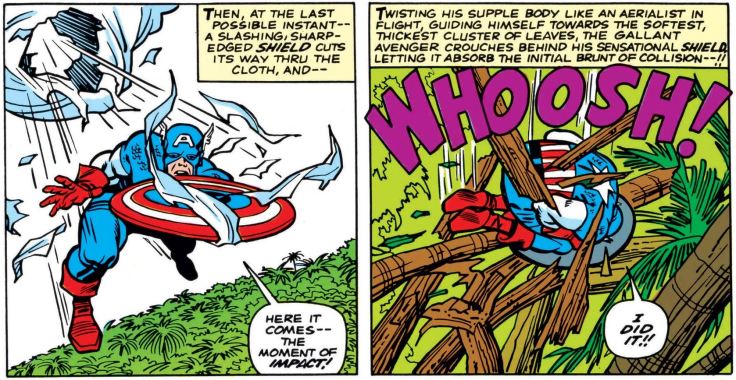 “I did it!” Also the words of a young man relieved (and maybe even a little surprised) at his achievement. We must remember, again, that Cap is a relatively young man at this point—well, maybe not chronologically, of course, but mentally. Then again, he has been through a war, which has given him a lifetime of experience, enough to “turn every new danger into his own advantage, such as when the Enchantress (a friend of the Executioner’s from work) causes a rockslide into the pit Cap finds himself after a battle with natives. 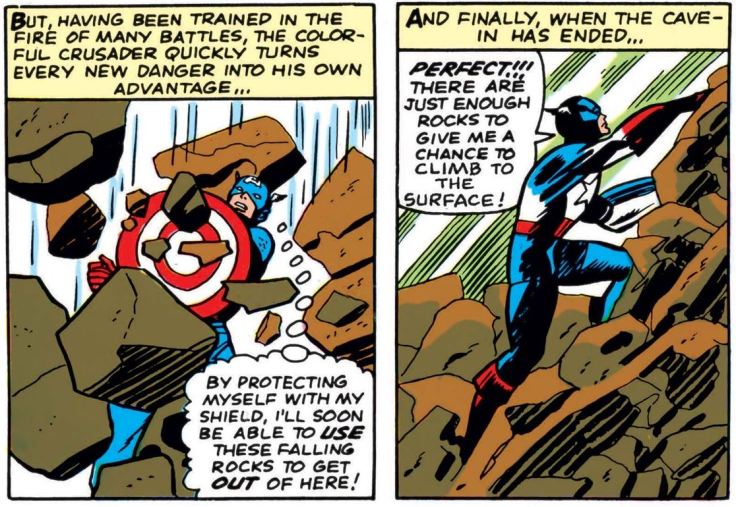 And again with the fighting skill… (In case you’re wondering… yes, the other Avengers were in this issue.) 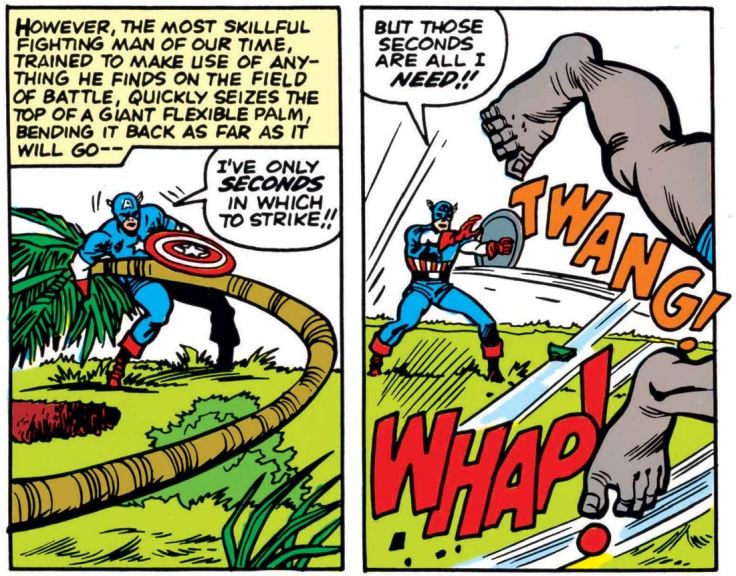 REVENGE AT LAST? NOT QUITE

Near the end of the battle, Cap finally gets his hands on Zemo and prepares to “extract” his revenge. 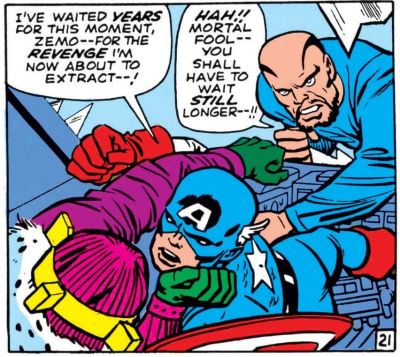 Luckily for him, the Executioner uses an Asgardian nerve-pinch on him, with “pressure equal to one hundred times the force of gravity” (umm, on what?), to incapacitate him—and denying us the knowledge of exactly what Cap would have to Zemo. A cooler-headed Cap would bring him to justice, but a Cap at this point… no way to be sure.

In what is starting to be a tradition, the issue ends with a rallying cry from Cap… maybe not his most inspiring one, but it’s been a hard day. 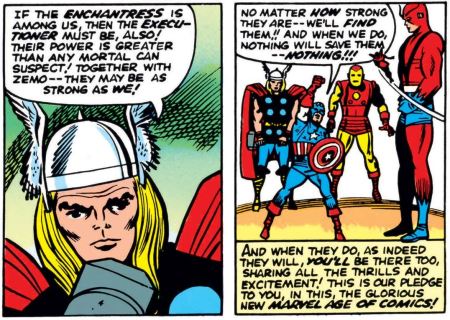 Gotta love the early Marvel Comics, just so much corn. 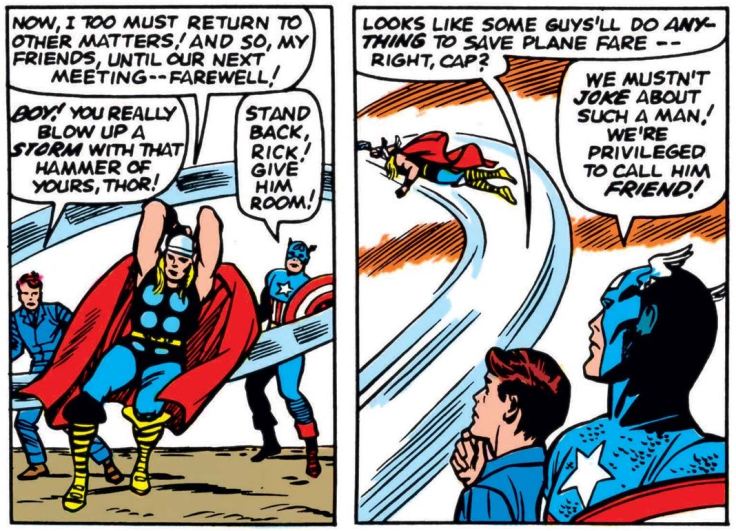 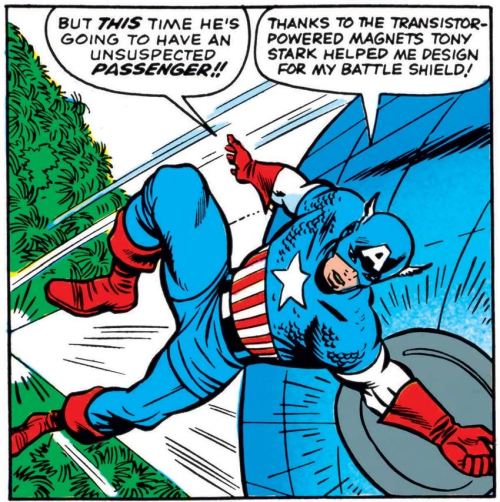 3. Did you know the light of the sun could break any evil hypnosis? Science! 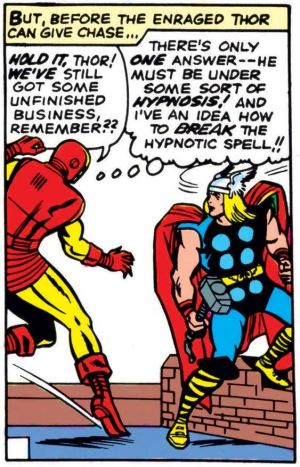