The Captain America annual contains a nice done-in-one story that generally fits into Captain America’s current status quo—complete with an interview for an art gig and a date with Bernie Rosenthal—while emphasizing his skills and virtues in a story involving a unique sort of foe… all wrapped up in a striking Frank Miller cover. (The Avengers annual, discussed in the post on Avengers #200, had very little Cap, so we’ll just see a few panels at the end.)

Our story beings with Cap preparing to sneak aboard a Coast Guard ship that has been hijacked by terrorists, led by the villain Constrictor, who are preparing to attack the World Trade Center (twelve years before the 1993 bombing and twenty years before 9/11).

Below we see the first reference I remember seeing to the fact that the chain mail on the upper part of Cap’s costume is shiny! Cap silently confirms the danger to Manhattan regardless of where the terrorists strike, giving him no choice but to attack, as well as the extreme nature of terrorism itself (which should never be tolerated even if it can never be eliminated). 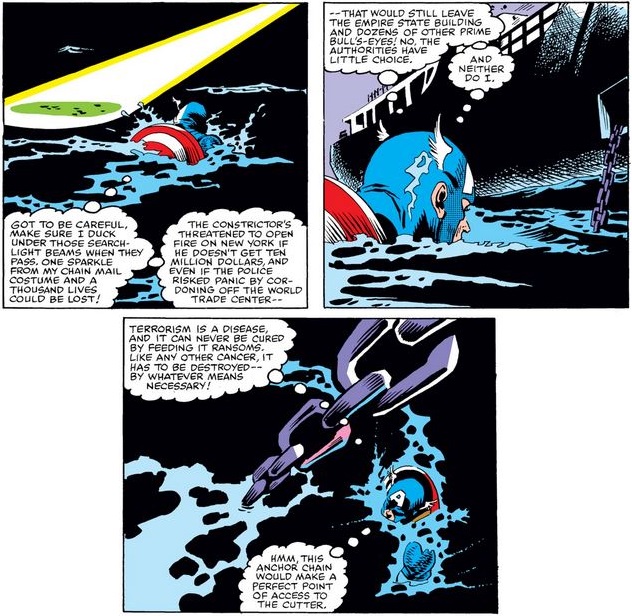 Cap makes it onboard and confronts Constrictor and his crew, mocking the leader for thinking a gun is going to work against him.

…but Constrictor finds a weak spot on his own, and exploits it to what could have been fatal consequences…

…had a bomb inside the ship not gone off, allowing Cap to finish off Constrictor and his crew, who are rounded up by the police. (From afar, someone is watching the entire affair, which will be important later in the story.)

When Cap finally get home, he can’t stop thinking about the unexplained explosion, to the point of nearly forgetting the good he did on the ship… you know, saving Manhattan and all. More impressive, as I’ve noted before, is his conscious balancing of the two sides of his life, one as Captain America and the other as Steve Rogers, freelance artist, both of them involving duties he must live up to.

The beefcake shot of Steve in the shower is a nice bit of foreshadowing for what he experiences when he gets to the advertising agency for an interview.

It’s hard to tell what he means by “simpler”: Surely he’s aware that sexual harassment occurred in the 1940s and mostly by men, even more so than now due to the far smaller number of women in management positions. (The 1933 movie Female provides a notable and fictional exception.) We get a more nuanced view in the 2011 miniseries Captain America: Man Out of Time: When Cap travels back in time to the days following the end of World War II, he sees the treatment of women and African Americans in a new light. We can presume he had always aware of this, but now finds more shocking having been in the “modern” world for a while, where things are better if far from perfect.

Back in Captain America’s life: After a mob boss is assassinated (again with someone looking on from afar), Cap responds to a summons from the police, and teaches the officer on desk duty that he should look up once in a while.

When he arrives at the lieutenant’s office, Cap meets the murdered mob boss’s chief rival—hmm, do I detect a subtle accent?

Quick wit on Cap there!

Cap trails Gamble around the city with nothing to show for it… until he follows him into his usual office building, where something has changed.

As the elevator doors open and a trap door reveals the empty shaft below, Cap bursts in to save Gamble, which his goons think is an attack on their boss, who they push into the open elevator in an attempt to protect him. (With bodyguards like this…) Cap pulls Gamble to safety but ends up tumbling down the shaft himself…

…only to saved by his mighty shield (made of a “super-strong alloy” that has yet to be revealed).

Any superhero would deserve a break after such a close call, and Cap gets his on a bike ride through Central Park (not Brooklyn’s Prospect Park?) with Bernie…

Cap has no problem with the bank robbers, even without his super-strong alloy shield, which wouldn’t fit underneath his biking gear.

One bank robber escapes, and when Cap follows him into an awaiting truck, he finds the man behind the recent murders (who was observing them as well), along with his cat, Fur-Person. (Seriously.) 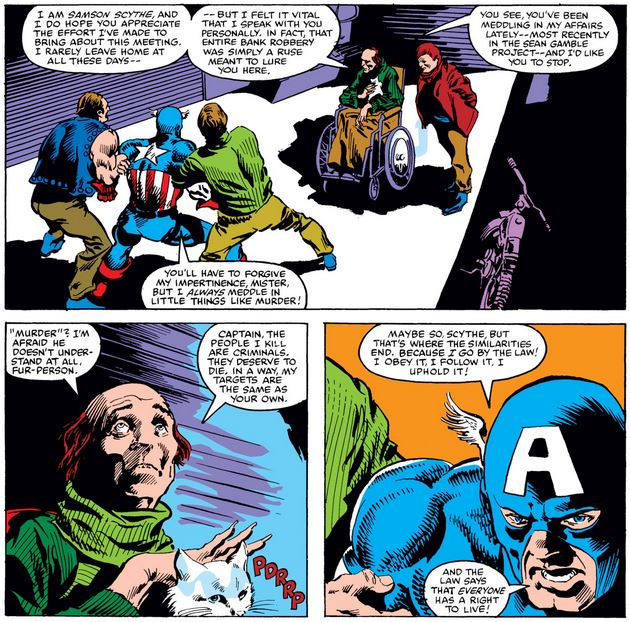 But Samson Scythe is no Frank Castle, driven to eradicate crime by any means necessary—as he explains to Cap over the next several pages, he developed a fetish for watching people die while serving in Vietnam, the only thing he could derive joy from, so he just started having a lot of people killed when he watched. As seen above, he tries to excuse this by saying he only has criminals killed… until he wonders what it would be like to kill a hero.

From this point on, Scythe puts Cap through a number of ordeals in an attempt to kill him, but Cap survives them all to confront Scythe and his assistant Hanson, who grabs Kafka’s flamethrower in the panel below…

…which, after a fracas, ends up burning down Scythe’s house with the owner in it, enabling him to watch his own death on a monitor as it happens.

Cap did manage to get Hanson out before the house went up in flames, and when the lieutenant asks for help explaining things to the mob boss Gamble, Cap says… “not now.”

It may seem trivial, but Cap knowing when he need rest is important: He knows his limitations and acts appropriately… virtuously, you could even say.

AND BEFORE I FORGET…

As I mentioned at the beginning, Avengers Annual #10 is a follow-up, a correction if you will, to how Ms. Marvel (Carol Danvers) was portrayed in Avengers #200, which was explained in the post on that issue.

This annual also introduces Rogue, who began her illustrious career as a member of the Brotherhood of Evil Mutants (as did the Scarlet Witch and Quicksilver) before switching sides to become a fan-favorite member of the X-Men. When we first meet her, she is giving the Sentinel of Liberty quite a beating, while introducing herself and her unique abilities, having already defeated Ms. Marvel.

Collected in: Ms. Marvel Epic Collection: The Woman Who Fell to Earth and Marvel Masterworks: The Avengers Volume Twenty.