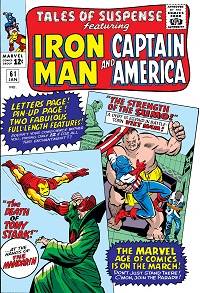 This issue finds Captain America traveling to Vietnam to negotiate the release of a prisoner of war, the first time we see Cap in a contemporary military setting (even though he isn’t in combat). As many future Cap stories do, this one shows him repaying a debt to a former colleague—in this case, one that saved his life in Europe during WWII—by rescuing his brother, Lieutenant Jim Baker, who was captured by the Viet Cong.

After withstanding gunfire, Cap submits to the Viet Cong and states his mission, acknowledging the debt he owes.

Of course, Stan and Jack wouldn’t miss a chance to show the Star-Spangled Avenger in action!

After passing the “test,” the VC major takes Cap to see Lieutenant Jim Baker and the mysterious General. 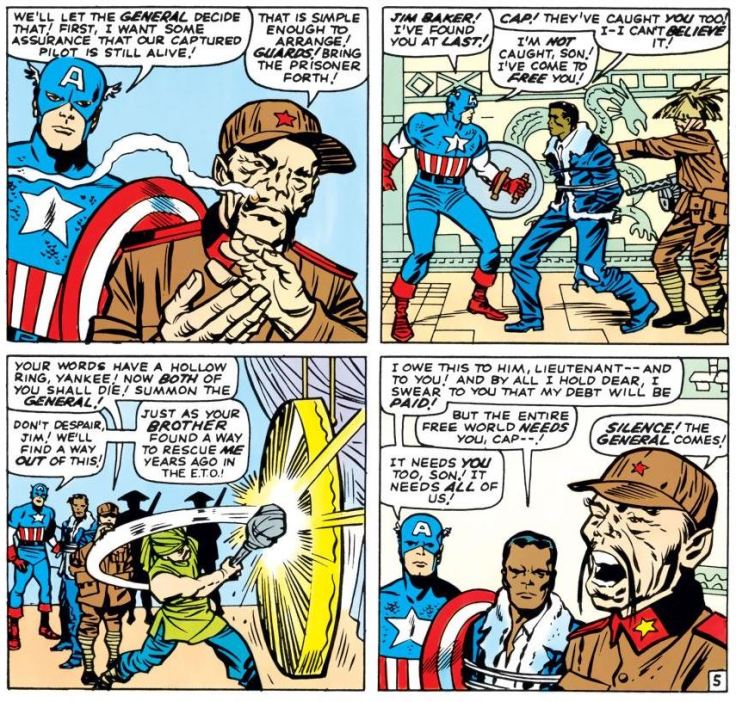 Much to Cap’s surprise, the General is a sumo wrestler, which gives Cap a chance to fight a unique foe for once—and this one is more of a match for Cap than most.

(Wrestlers tend to know a little bit about leverage, Cap, but OK.)

Time for a little sledding!

Jim and Cap face another sumo wrestler on their way to the General’s private jet, but Stan and Jack just let Cap’s time-to-pin speak for itself (given that they were on the last page of the tale).

The story ends with a cute display of Cap’s humility and consideration, downplaying Jim’s gratitude by claiming he couldn’t hear him, and giving a sly eye to the reader.