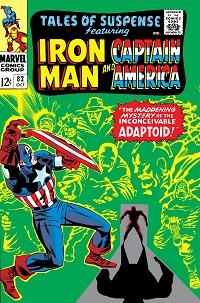 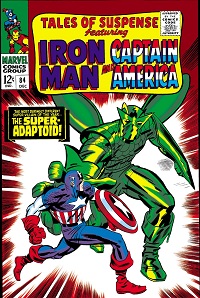 This story introduces the Adaptoid, a creation of A.I.M.—the organization that also brought us the Cosmic Cube and evil beekeeper suits—that takes Captain America’s form but finds out that stunning good looks are not enough to be the Sentinel of Liberty. (But they do help.)

As many early stories both in Tales of Suspense and Avengers do, this one starts in issue #82 with Cap reminiscing.

Here we see Cap’s attitude of gratitude towards Tony Stark-who-totally-couldn’t-be-Iron Man and Jarvis-who-just-might-be. As the scene continues, we see more of Cap’s respect and affection for Jarvis, as well as confirmation of his self-perception as “just a regular joe” who takes a shower rather than having a bath drawn for him.

Soon after, however, he has a series of realistic hallucinations of the war with Bucky, facing an array of his foes, and being in the mansion with the Scarlet Witch and Quicksilver, actually in Europe on leave from the Avengers. This has Cap rattled, which we see here after Cap thinks he’s fighting Agent Axis in the war.

It’s very nice to see battle fatigue—or, as we’d call it today, PTSD—acknowledged, especially by the Super-Soldier himself. (We’ll see it again in an upcoming issue.)

Cap finally collapses until the mental strain, and Jarvis catches him—except it ain’t Jarvis, but the Adaptoid!

The Adaptoid then abandons the mighty form of Jarvis for the even mightier form of Captain America, only to be attacked by the Tumbler (we used e‘s in the old days, kids) at the beginning of issue #83—a man so jealous of Cap he joined the circus to learn tumbling so he could beat his rival. (Seriously.)

Even though it isn’t the real Cap who the Tumbler finds in Avengers Mansion, a few panels from their fight are interesting because of the Adaptoid’s confusion over why he can’t beat his foe more easily.

Unfortunately the story doesn’t address what it is that the Adaptoid lacks—training, experience, or some element of character that would helps give the real Cap his edge. (Frankly, I’m surprised the Adaptoid does as well as he does. After all, he’s fighting THE TUMBLER.)

Meanwhile, the real Cap revives and manages to free himself, showing resilience in the face of pain in the process.

When Cap joins the fight, the Tumbler has already defeated the Adaptoid by throwing him through a door—and is very surprised to see his foe back, none the worse for wear.

What changed indeed? Too bad we don’t find out. But the ease with which Cap takes care of the Batroc-wannabe is entertaining nonetheless.

Afterwards, Cap and Jarvis retrieve the Adaptoid, tie him up, and call in the other Avengers, who show up at the opening of issue #84—only to have the Adaptoid secretly steal their abilities too. (Oops.)

After the others leave—priorities, you know—Cap stays behind to watch their captive, and indulges in some more existentialist angst. 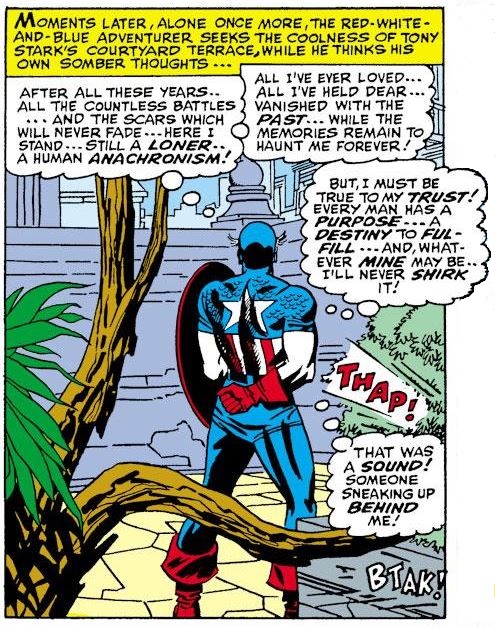 Again we see the theme of purpose, meaning of life, or destiny, and how Cap takes his as given, swearing to live up to it but not questioning it (at least not here). But we can sense his dissatisfaction growing, and in coming issues we will see more of a reaction that will showcase more authenticity on the part of Captain America.

And what was that sound? It was a new and improved Super-Adaptoid, taking a page from the Super-Skrull’s book and displaying the powers and abilities of Cap, Hawkeye, Goliath, and the Wasp. The two of them fight for most of the story, including high in the sky over Manhattan, until Cap finds himself falling and has to manipulate his body to avoid become red, white, and blue roadkill—but not before, in the first panel below, a split-second of realization and consideration that this may be the end.

Then his (iron) resolve shows as he surfaces—but I don’t know if the enemy escaping counts as victory, much less “ultimate victory.”

Above these final panels, we actually see some interesting thoughts from the Super-Adaptoid, who suddenly finds himself pondering his own existentialist freedom.

(We see him next to X-Men #29, unfortunately outside the purview of this esteemed blog.)