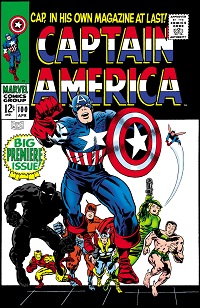 With this post we reach the end of Captain America’s run in Tales of Suspense and the beginning of his first self-titled book (continuing the previous title’s numbering while co-star Iron Man gets his own #1). And this four-part story features the first appearance of Black Panther outside the Fantastic Four book, and leads directly into his joining the Avengers soon afterwards.

Tales of Suspense #97 begins with Cap responding a fake distress call from two thugs from the Syndicate who want to collect the bounty on his head. 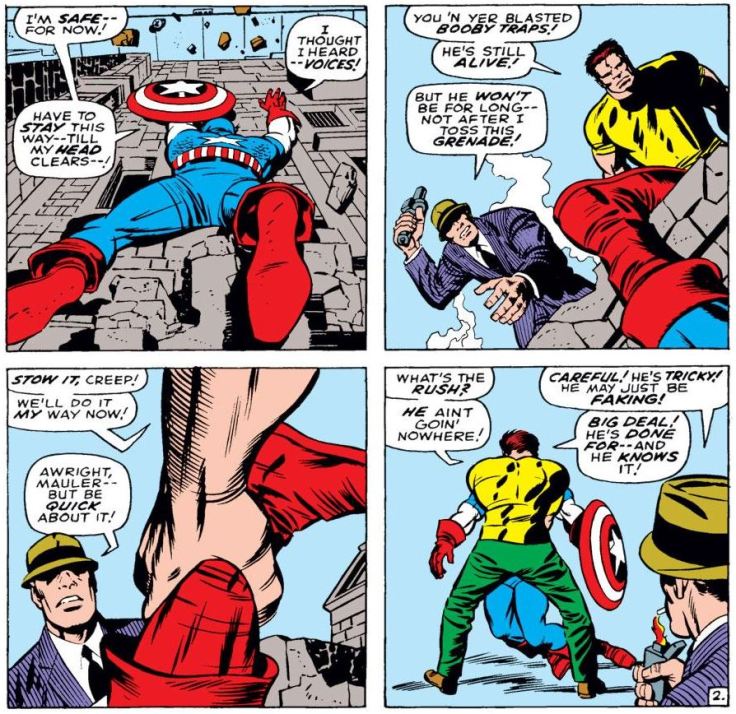 Once again we see Cap employing subterfuge, not his usual modus operandi but a useful technique nonetheless. 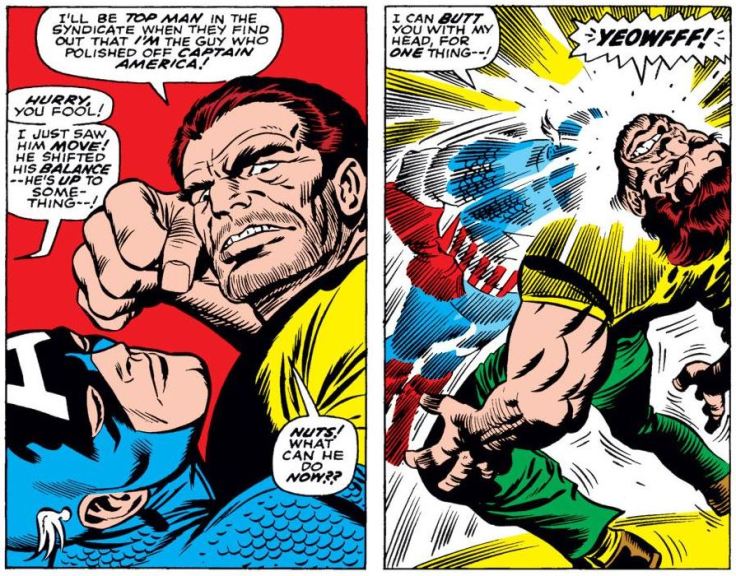 This leads to a bit of ennui as Cap reflects on his fate, which is all the more poignant after his short-lived attempt at retiring in the previous two issues. 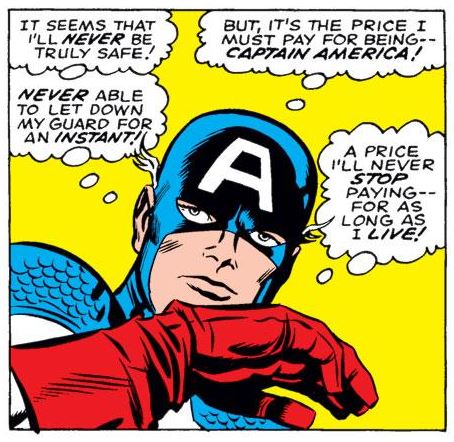 His attitude continues after the doctor checks him out and the police captain tries to get him to take it easy and lay low until the police can round up more of the would-be assassins. 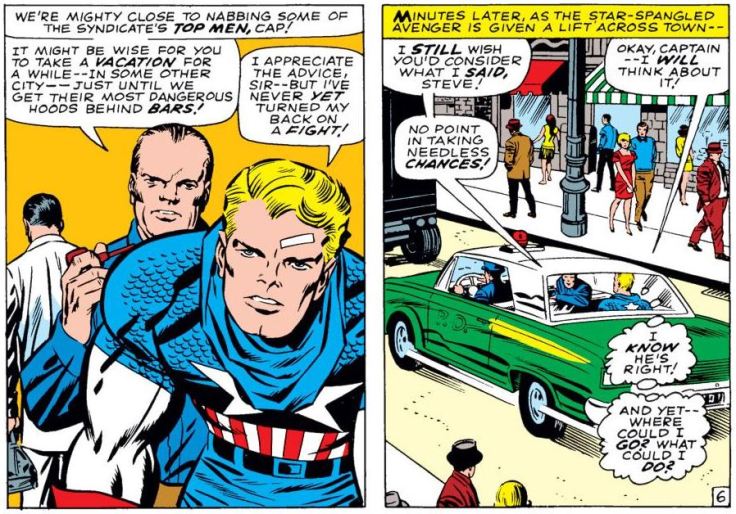 There’s a very interesting contrast between his words to the captain in the lower-left panel above and his inner thoughts to the right, both of which can be taken as sincere but very different aspects of his thinking. To the captain he shows his determination and never-give-up attitude, but meanwhile he realizes that even if he did agree to take some time off… what would he do then? What else does he have in his life?

After the captain drops him off—maskless, now that his identity is public—Cap pays tribute to the police, with a vague reference at the end to social contract theory (acknowledging that even lawbreakers benefit from law enforcement). 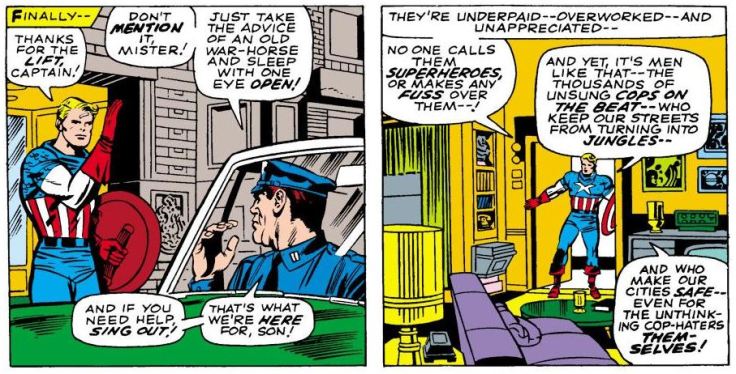 Thanks to Stan and Jack, we find out exactly what she’s doing—even if we don’t find out her name yet. (That’s OK, though… we’re not proposing to her.)

Cap’s melancholy is interrupted by a noise on his roof, and anticipating more assassins, he’s surprised to find an airship from a new friend who needs his help.

As Tales of Suspense #98 opens, Cap lands in Wakanda and finds himself under attack immediately.

We’re treating to an all-too-quick “battle” between Cap and the Black Panther in which each learns what the other is capable of, and sets a pattern of mutual admiration and respect between two paragons of virtue in Marvel Universe.

After T’Challa explains the threat—destructive heat rays from an orbiting satellite that Wakandan rockets have failed to destroy—he and Cap take off to find out more about it.

Even as they rush off, Cap is still thinking about his lack of a private life or home, without a dream in his heart, and without a love of his own.

But the biggest surprise is yet to come, as our two heroes fall into a lion trap, and Cap learns the identity of the man behind the attack on Wakanda.

In Tales of Suspense #99, Cap gets to wax noble in the face of Zemo’s threats.

I’ve always admired how Cap can remain defiant in the worst of situations, whether facing off against Thanos, the Asgardian All-Father Odin, or even lesser thugs like Baron Zemo who nonetheless would seem to have Cap on the ropes. Whether you chalk it up to determination, bravado, or psyching his opponent out, it’s a hallmark of Captain America’s cool under fire.

Of course, this is only Zemo and his Violet Villains, so Cap was never really in any danger… yet. (Note how he asserts his existential freedom while he frees himself.)

After a few pages of thrilling battle scenes thanks to Kirby, Zemo’s forces manage to subdue Cap and Panther and subject them to “hypno-light” that saps their strength and concentration, after which Zemo outlines his devious plan to true supervillain style. (And here it’s Black Panther’s chance to proclaim eloquently the importance of freedom.)

Despite their resolve, Zemo’s thugs overtake them easily, just in time for Erma to show up… but very bad timing for her. 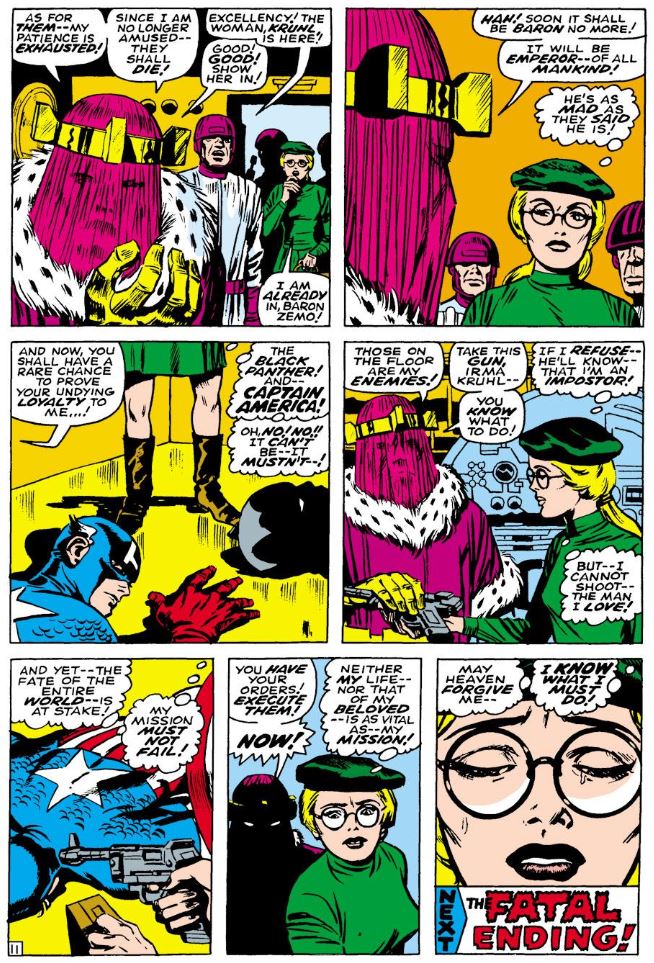 Captain America #100 begins with Cap dreaming off the day the Avengers found him underwater in Avengers #4, when Cap comes to suddenly with Bucky’s and Zemo’s names on his lips. (Look how inker Syd Shores gives Steve’s face a certain golden-age elegance, also noticeable in many of the shots of Sharon later in the issue, especially in profile.)

Cap wakes from this dream to see “Erma Kruhl” holding a gun on him, while she experiences a bit of crisis herself.

T’Challa nobly tries to knock Cap out of the way, but Sharon “misses” anyway. Cap sharply recognizes this as intentional, while Zemo’s goons are none the wiser. (And I mean none.)

It isn’t difficult for Agent 13 of S.H.I.E.L.D. to convince Baron Zemo to refocus on the mission, giving Cap and Panther a chance to recover and once again show their admiration for each other. 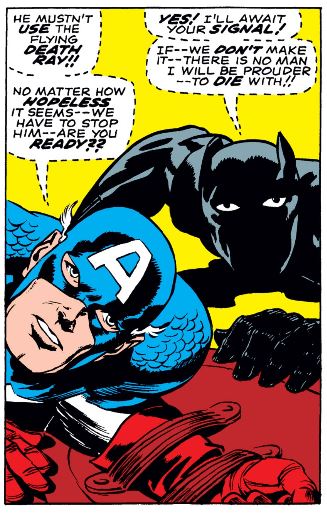 Once Baron Zemo shows Sharon the control panel, she introduces him to her little friend.

So now you know: the sound an exploding control panel makes is SPLASKK. (The second K is silent.)

Cap finally learns who “the girl” who saved his life twice is. (Notice, again, the beautiful Syd Shores inks.) 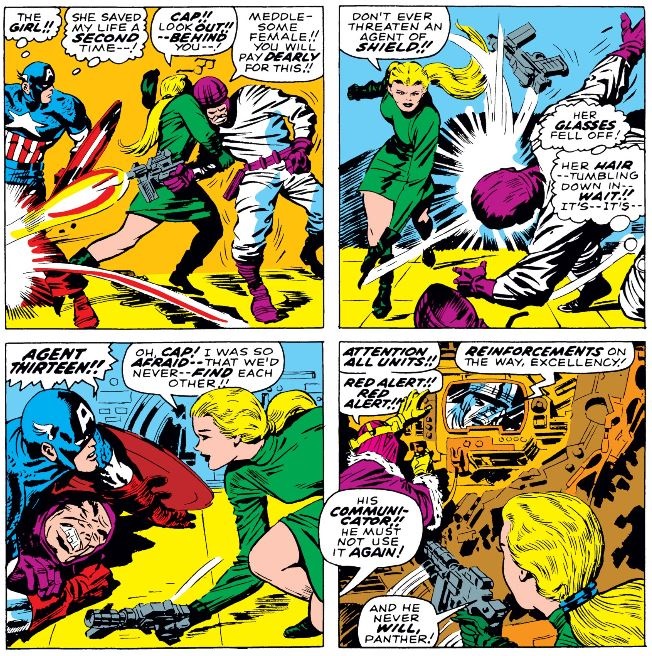 For the rest of the story, as the three heroes fight Zemo and his goons, two of the heroes are thinking as much about their future together as about, you know, saving the world.

After many pages of battle, including against the Destructon—don’t ask—Cap, Sharon, and T’Challa finally catch up to Zemo, and now it’s his turn to be surprised.

“Jinkies! It was the pilot the whole time!” (I don’t remember Scooby-Doo cartoons ending that darkly, though.)

Black Panther steps in with royal authority and takes control of the situation with Baron Zemo’s pilot’s thugs (and Cap notices).

After Panther declares hostilities to be over—and who would question him?—Cap and Sharon turn to what’s really important. (And the deadly solar ray, that too.)

Even reunited, Cap and Sharon return to their original dilemma they encountered on their first date in Tales of Suspense #95: the conflict between duty and love.

(It seems that Dum Dum Dugan has more respect for Sharon’s work than Cap does.)

In the final panels of the issue and story, Cap makes T’Challa an offer he can’t refuse… to consider. And Cap reasserts his destiny—maybe with more than a little remorse, given what it implies about his future with Agent 13 (whatever her real name may be).