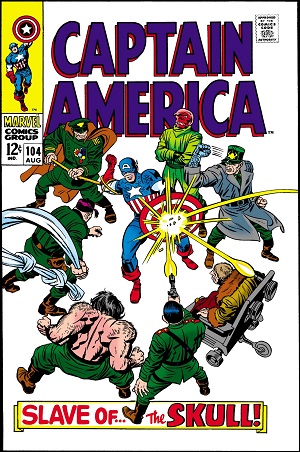 These two issues of Captain America continue the storyline with the Red Skull that began in issues #101 and 102, now that the villain knows about Captain America’s love for Sharon Carter. More important, Cap finally learns Sharon’s name (as does the reader)! Maybe now he can stop calling her “girl” and “lady” (not that that was any excuse).

At issue #103 opens, we find Cap and Sharon on their second date (and the first in which he doesn’t propose). 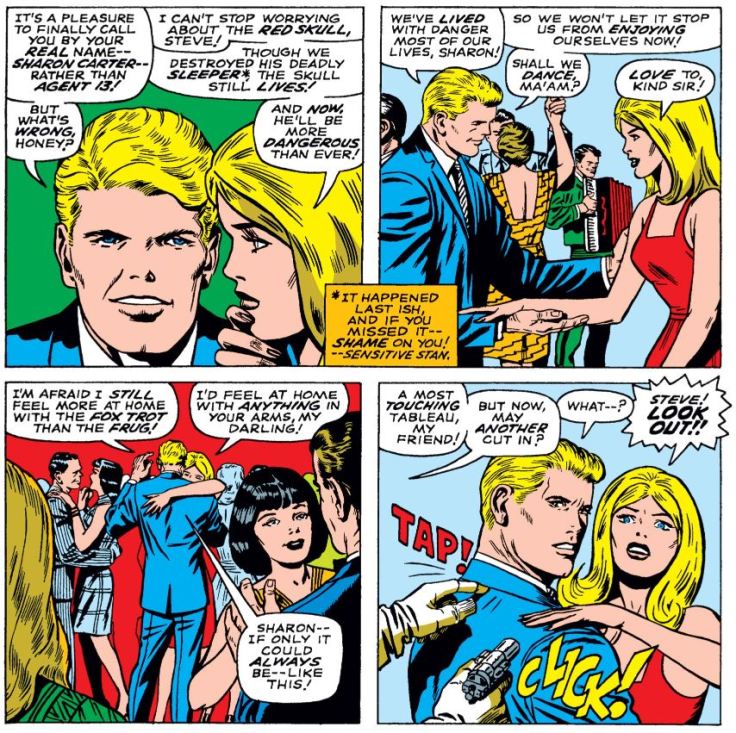 He might have proposed, of course, if the Red Skull’s Exiles hadn’t knocked him out and absconded with Sharon.

The Skull discovers he needs better help, as his thugs didn’t realize that Sharon’s date was none other than Captain America himself. (He gets points, though, for recognizing that employees that don’t feel free to speak up don’t have incentive to think for themselves and improvise on the spot. Bad leadership skills, Skull.)

As if he would want Cap to die at anyone’s hands but his own.

I wish real-world Nazis were as open about their character flaws as the Skull is below; although his dialogue may be accurate, it’s cartoonish at the same time. (His depiction in later years would be much more frightening.)

Did you think Cap was waiting for a phone call all this time? Of course not, and Fury’s pilot shows admirable confidence in his passenger.

I show the splash below not only for the thought bubbles showing Cap’s single-minded determination but also because it’s a Kirby splash page. (Duh.) 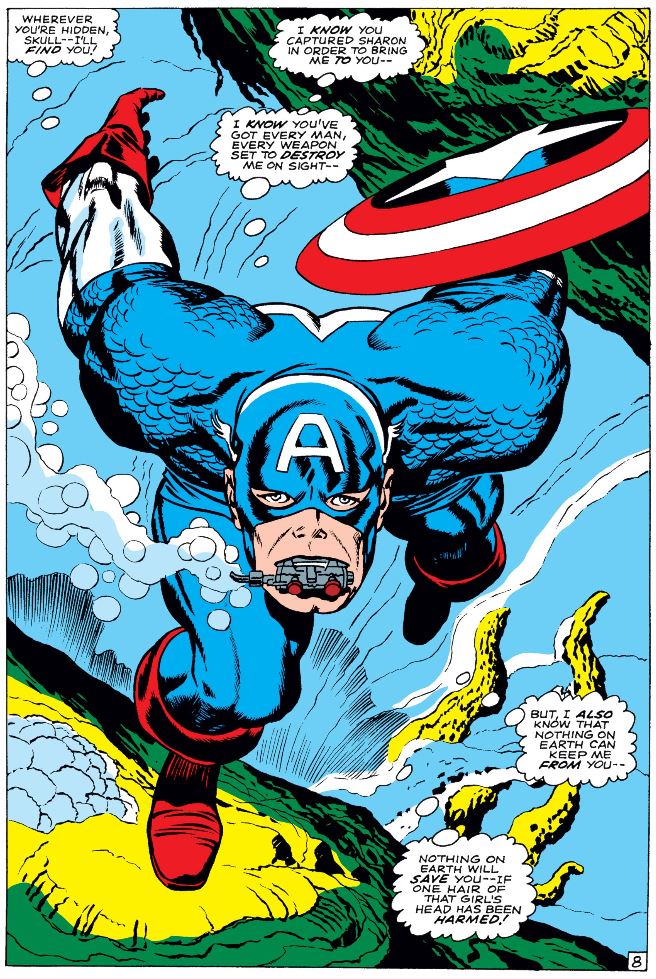 After pages of Cap cutting his way through any number of Exiles, the Skull catches him by surprise, at which point the story gets really interesting.

Note, yet again, that the Red Skull doesn’t simply kill him when he has the chance. (“That would be… too merciful.”) He’d rather torture him, although his plan in this story doesn’t involve ruining his reputation—this type of control seems more personally humiliating, even though Cap won’t realize what the Skull is doing for some time.

Cap gets dumped in a cell next to Sharon…

…and he hears the words every person wants to hear from their great love: “I knew the odds were too impossibly great, even for you.” (Gee, thanks, honey.)

But Sharon redeems herself when she breaks them out (after which Cap still calls her “lady”), and it’s only a matter of time before they find the Skull, which gives Cap and Skull a chance to engage in more verbal sparring about racism, equality, and liberal principles of freedom and justice. 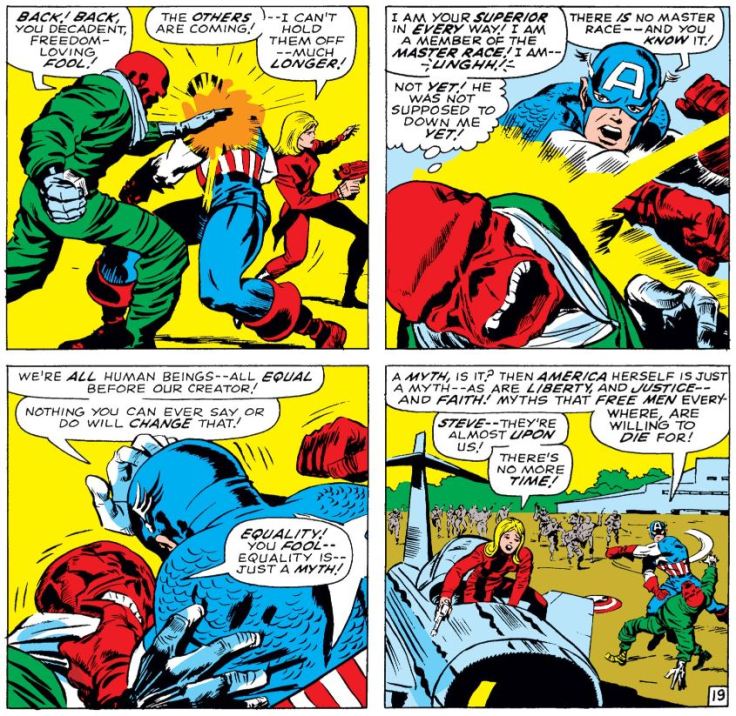 Great words from Cap, especially in the final two panels above. (Gee, and I thought comics only became political lately, hmm.)

Cap and Sharon escape… which is what the Red Skull wanted all along, of course. Mm-hm. (And again with the anachronism talk.)

In issue #104, we see the effects of the Red Skull’s nuclear detonator neck thingie. (By the way, the first panel is a perfect recreation of how my doctors speak to me too.)

(Why the tape has to be “nuclear” I have no idea.)

So even though the Red Skull “let” Cap escape his island, now he tells him to come back, at threat of destroying the nation’s capital.

Furthermore, he invokes his own sense of personal honor to do it, which I find fascinating, not only for the fact he claims to be honest, but that he assumes Cap would know and appreciate this.

(His explanation for why the Nazis lost WWII too is priceless. “He shoulda listened to me!”)

Cap tells Sharon he has to go back, heroically offering himself in sacrifice to save countless lives.

Cap gives himself up to the Red Skull, but is still defiant to his men, even poetically so.

The Red Skull puts Cap through a sort of gauntlet, fighting his “chiefs of staff,” including this fella with the best evil moniker ever… 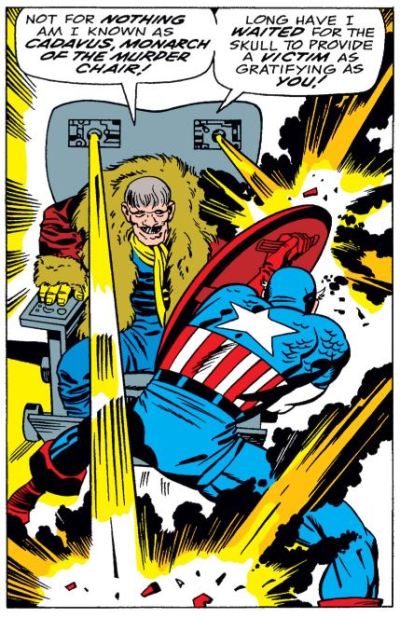 …as well as the slightly more physically intimidating Krushki. (I show this page simply because I like when Kirby draws tumbling or wrestling. And it’s my blog.)

Naturally, Cap defeats them all, and when the Red Skull hits the button on his detonator, nothing happens… because Nick Fury and S.H.I.E.L.D. managed to defuse the bomb, as Sharon explains before Cap gets all inspirational, as he does. 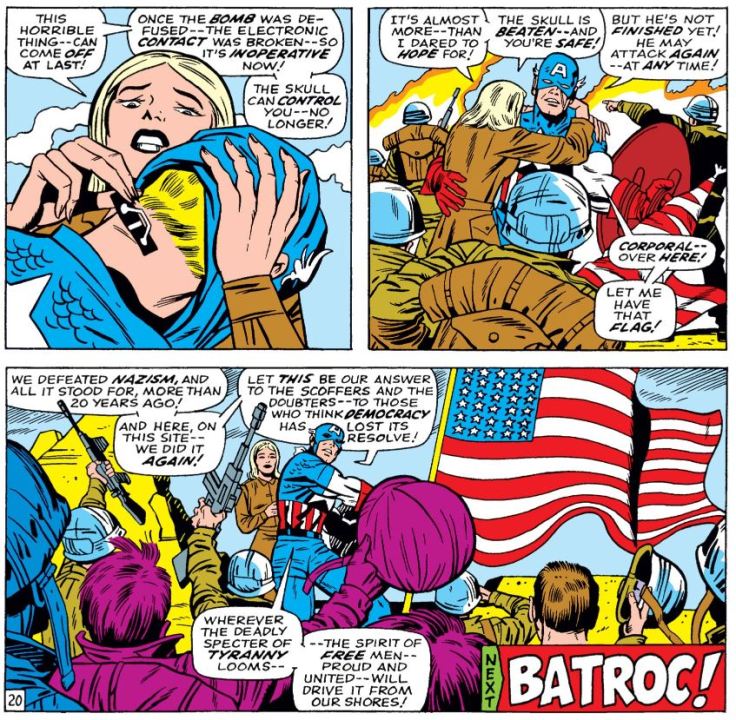 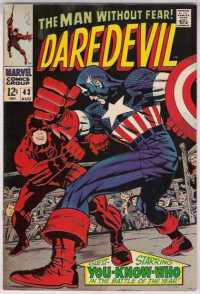 Also on the August 1968 slate at Marvel Comics was Daredevil #43, featuring a terrific Jack Kirby cover depicting Cap and ol’ Hornhead facing off in the ring—which was all that really happened in the issue, at least as far as Cap is concerned. Cap was participating in a charity exhibition fight in Madison Square Garden, and Daredevil, driven loopy by some radium, wants to fight ‘im!

Before that happens, though, we see the announcer talking Cap up to the crowd—as if he has to—and Cap is positively mortified.

After Daredevil bursts in and starts to fight, Cap naturally takes it easy on his fellow hero, until he sees that his friend isn’t taking it easy on him. (The pencils, by the way, are by the amazing Gene Colan, who would soon be drawing Cap in his own title.) 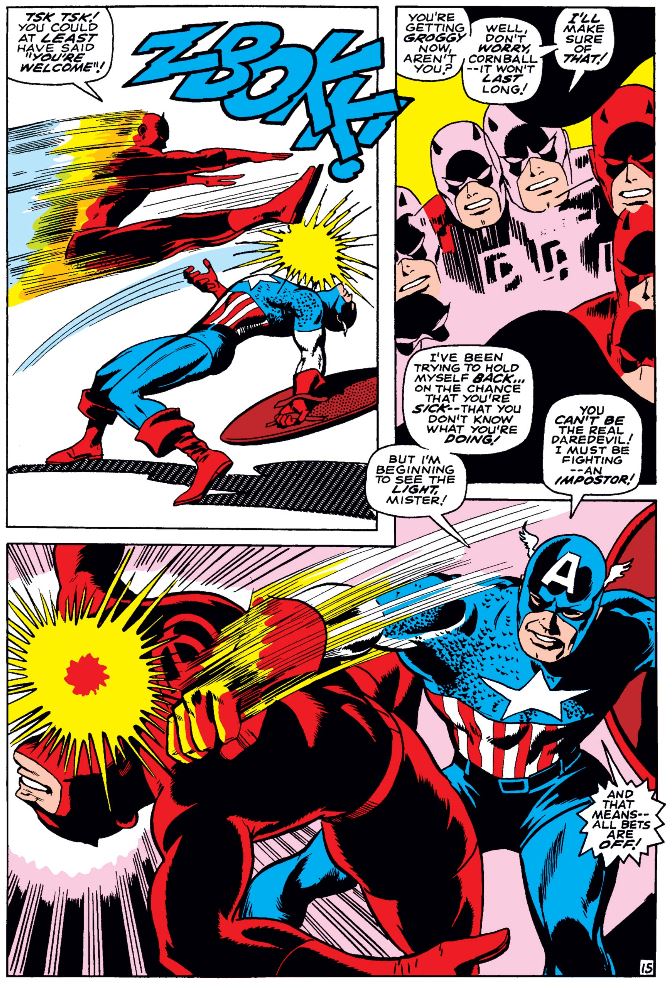 Daredevil is acting so erratically that Cap suspects he’s fighting an imposter, but is then so impressed by his opponent’s skills, he realizes it’s the real article. After a lot more fighting, they end up falling down an elevator shaft and out into the street, and Cap admirably tries to tell his friend to get medical attention rather than fight any more.

After Daredevil shakes off the effects of the radium, he flees, and Cap generously covers for him with the press, and quietly gives him the benefit of the doubt, as a fellow man of virtue. (A book is coming some day, I hope!)

Just wait till we get to Captain America #235-236 (July-August 1979), when Cap and DD team up… and Matt flies a plane! Until then, check out my good friend Christine Hanefalk’s post at The Other Murdock Papers on those issues.