This issue continues the storyline begun in issues #115-116, in which the Red Skull uses the Cosmic Cube to switch appearances with Captain America, ruining Cap’s sterling good name and leaving the real Cap to face his friends and foes in the guise of his worst enemy.

At the end of the last issue, the Skull banished Cap to the Isle of Exiles to face the other villains the Skull betrayed, and while there, Cap meets someone who will play an indelible role in his life (and his title) for years to come. (Well, you can see the cover to the right, can’t you? Foiled by my own chosen blog format.)

As Cap lands on the island, he is vocally defiant, and the Skull marvels at his resolve—especially after all he’s put him through the last couple issues! 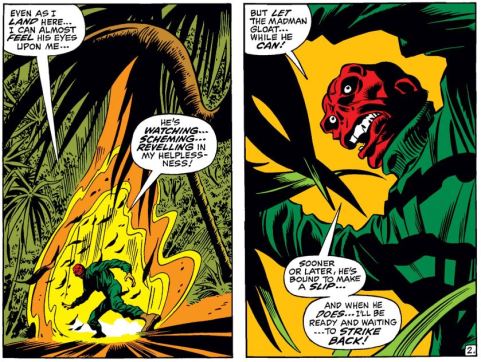 As the Skull planned, his old pals in the Exiles waste no time in attacking Cap, who gets some help from a feathered friend (foreshadowing another new friend who shows up later in this issue).

While Cap fights the Exiles, the Red Skull continues to ridicule Cap’s fans and supporters, as we see in the nonsequential panels below. 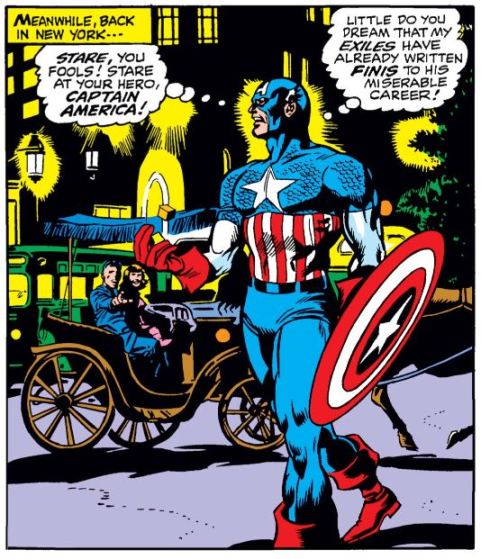 I appreciate how the man in the second panel below notes the Skull’s swagger and thinks it out of character for Cap, implying that his humility is already fairly known among the public, even in terms of his body language.

And again, with the men at the bottom of the page below… 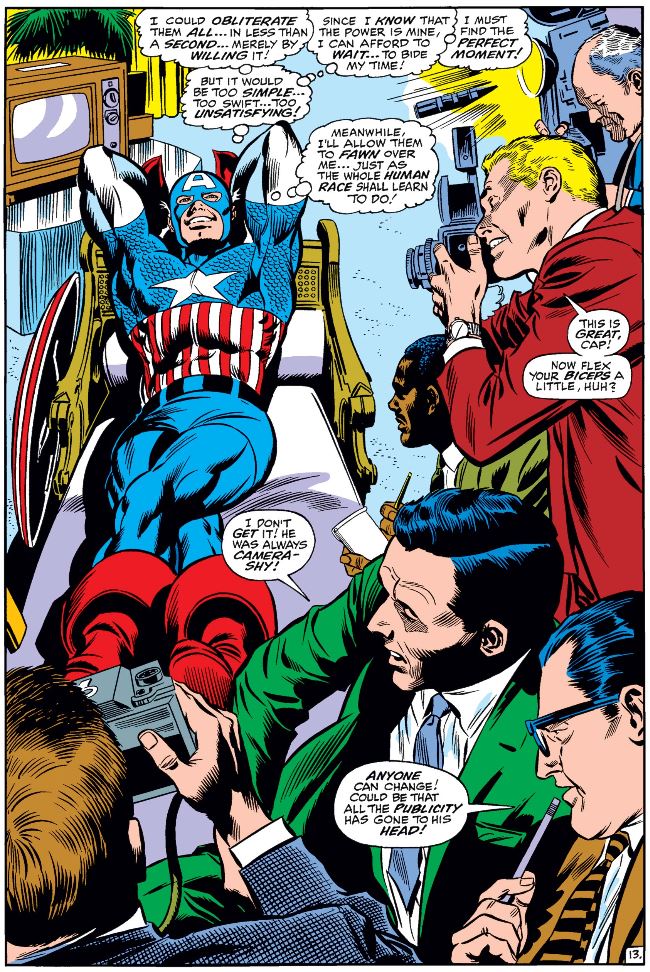 Yes, Skull, you definitely don’t want to rush it, seeing how much fun you’re having. (I don’t imagine he’s seen Ninotchka?)

Above and to the left, the Skull finally gets the idea you’d think he had all along, considering how common an element of his plans it is: using his situation to ruin the good name of Captain America, which will be a decidedly personal defeat, and particularly gratifying for a tyrant who values reputation and fear above all else.

Meanwhile, back on the Isle of Exiles, we finally get our first glimpse at the man behind the bird who saved Cap: Sam Wilson, who by the end of the issue will become Falcon, later Cap’s partner and an Avenger, and eventually Steve Rogers’ successor as Captain America. (But you knew that.)

(Cap wasn’t in a red jumpsuit, but oh well. The Red Skull makes the same mistake in the next issue.)

Before he meets Sam, Cap realizes that he could have taken off the Red Skull’s mask at any time—oops—and then uses mud to make himself look less like the guy no one would recognize anyway because he always had a mask on. (Maybe the Skull’s torture did get to him after all!) 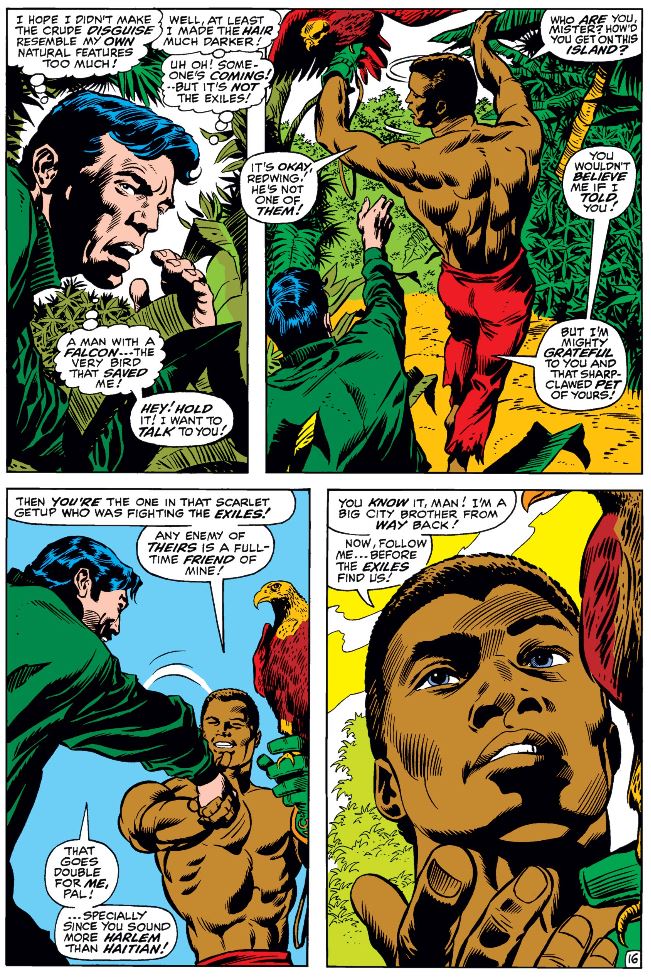 Sam gives Cap the short version of his backstory—or what he thinks is his backstory (it’s complicated)—and Cap realizes he’s met a similar fighting spirit who resists being ordered around.

Cap is more than happy to join Sam (and Redwing) against the Exiles, but he has a very familiar idea how to do it.

And with Cap’s suggestion—and a little help from Stan Lee and Gene Colan—the first African-American superhero, the Falcon, is born.

You must not miss our next sensational, landmark post… if you want to know what happens with the rest of the tale.