This post, covering the second part of Steve Englehart’s debut Captain America story, will be the shortest of the four, and deals mostly with the Falcon confronting the strange new Captain America and Bucky that appeared in the last issue, and then enlisting the Avengers to find the real Cap. Speaking of whom, our Steve Rogers appears very little—presently cavorting on the beach with Sharon Carter—but we learn more about the impostors, which serves as a counterpoint for the authentic Cap (as we’ll see more in the last two installments of the story).

Warning: As seen in the last post, the impostor Cap and Bucky do use racially offensive language. (This is explained in the next post.)

As this issue begins, Sam is still fighting the impostors.

Below we learn why this Cap and Bucky have been harassing Harlem residents: to lure out the current Captain America, whom they consider to be the true impostor.

Redwing comes to rescue, once again, giving Sam a rest so he can start fighting again… 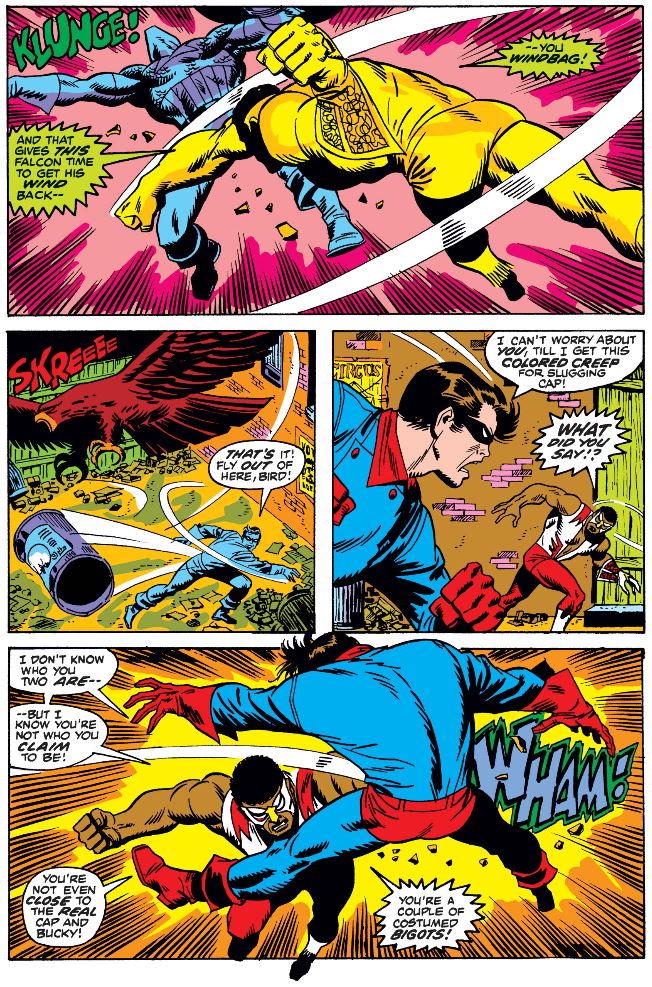 …and landing a blow against bigotry and hatred, as well as stressing the difference between these two and the men they are impersonating.

In the panels below, we are reminded that this Cap and Bucky have superhuman strength; that this Cap’s shield is nowhere near as strong as the genuine article; and they are all too willing to use torture to get the information they want (as if bigotry weren’t enough reason to loathe these guys). 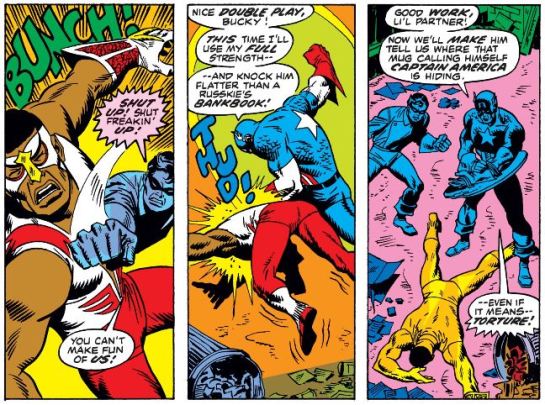 And below we learn that this Cap is very concerned about the Communist threat (“reds”), and proclaims himself “the true force” of American democracy (which the real Cap would never do, although he proudly represents and defends it). All this, again, is to contrast him with the real article. 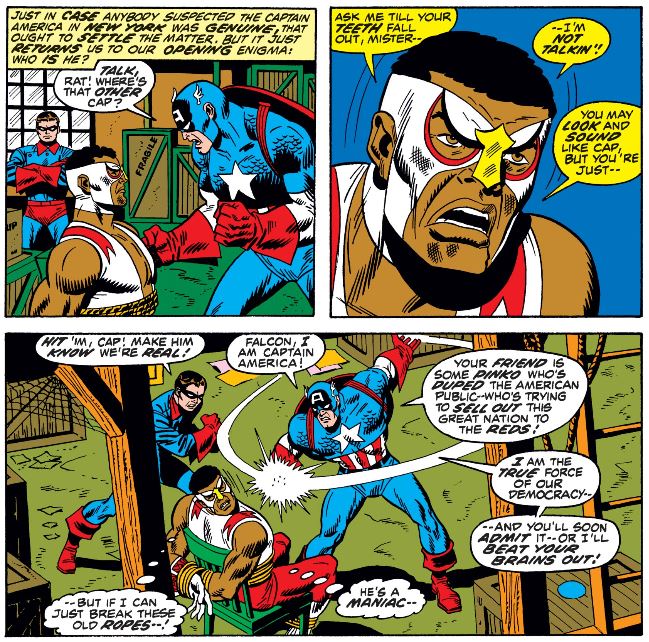 Meanwhile, Sam’s nephew Jody (whom we first saw in issue #134) and his friend saw the impostors and Sam fighting, and told Rafe, the leader of the local black militant group. Rafe seems unwilling to help the Falcon, whom he sees as an Uncle Tom, but his fellow members argue for the good the hero has done for the community, and convinces Rafe to lead the gang to save Sam.

By sheer force of numbers, they get the advantage over the impostors, and give Sam a chance to free himself… and figure out who this Cap really is.

Have you? (It’s a very subtle point, and points more to this Cap’s being an impostor than who he actually is, but you may have caught it.)

The imposter Cap sees his way out and takes his Bucky with him… and the exposition claims that he is not only a racist and a gleeful torturer, but insane as well. (I don’t know if that has been “demonstrated” as such at this point, but we will see more elaboration on this point in the last two parts of the story.)

Now it’s time for Sam to find the real Cap, starting with a call to Steve’s hotel, and then a visit to Avengers Mansion to ask them to be on the lookout for the other Cap and Bucky.

Englehart would start writing the Avengers title the next month; in his introduction to Marvel Masterworks: Captain America Volume Seven, he said this scene may very well have been his “audition.” 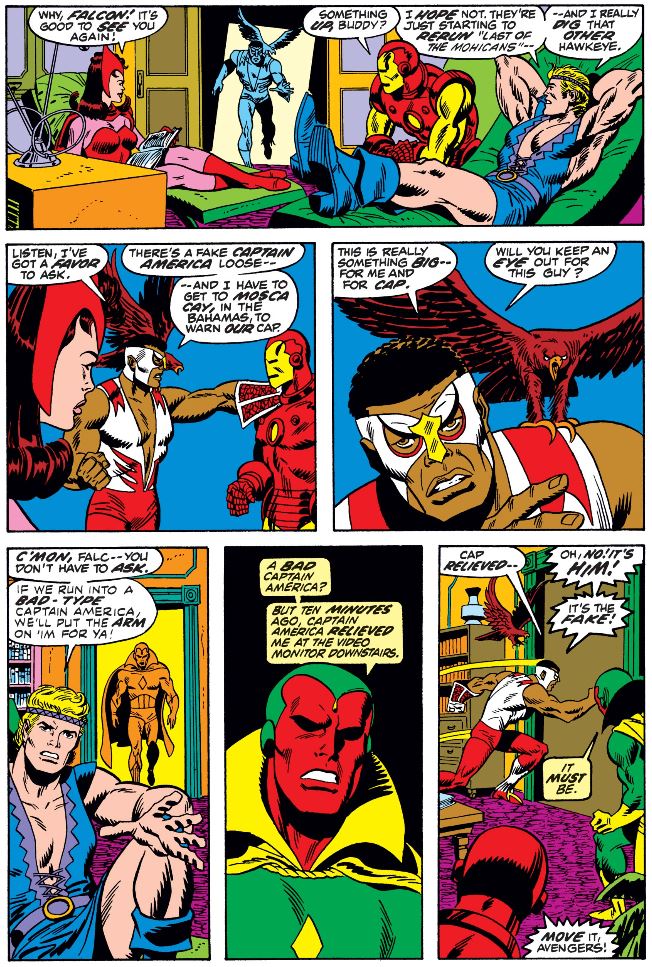 So much for acute android perception. (And as I’ve said in posts on this period in Avengers: Hawkeye, put on some $%^& pants.)

The next (and final) page tells us that not only are the impostors on to where the real Cap and Sharon are, but also that the cover to this issue was wildly misleading. 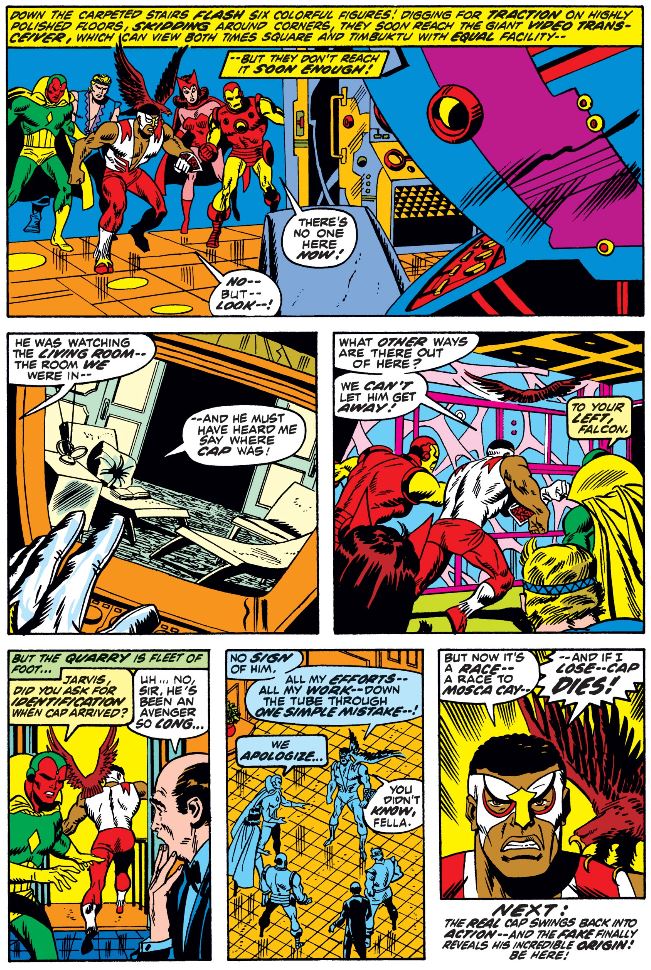 In the next post, we’ll finally get the skinny on the impostors… and see what happens to Steve and Sharon when they get too much sun.