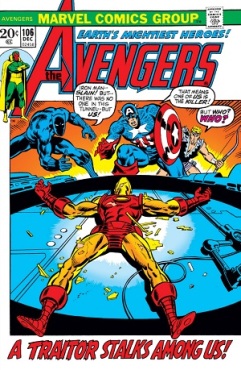 These three issues are the first Avengers stories from writer Steve Englehart we’re seeing on this blog (although he also wrote #105, in which Cap did not appear). It is a particularly wild story that reimagines some past Cap stories, using a villain from before his days as an Avenger—that is, from before Avengers #4!

Issue #106 opens with Cap coming upon a morose Vision—which is to say, Vision. Instead of telling him the exciting story from Captain America #153-156 (starting here), Cap tries to empathize, but finds that Vision’s ennui fu is even better than his own.

Cap never gets to give Vision his sage advise, because an old friend storms in, angry about his treatment in the last Avengers storyline, and inadvertently triggers a mental episode in his former mentor… 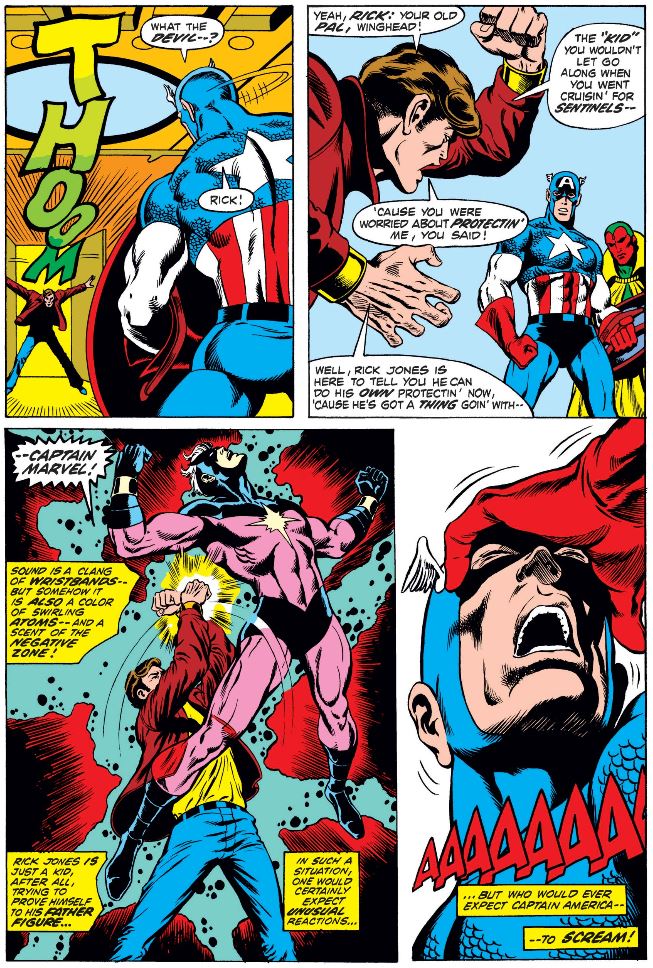 …which takes him back to the time of Captain America #113, after his and Rick’s battle with Hydra after Cap’s “return from the dead.”

Cap’s vision also serves to remind us how he faked his own death chiefly to “kill off” his Steve Rogers persona (a concern which seemed to fade after a few months). 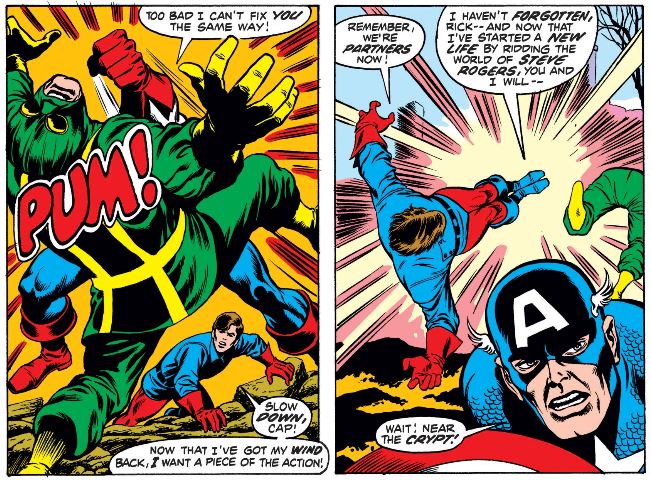 When Cap’s episode is over, he explains to Rick (and us) how he interprets it.

Cap returns to the scene of the battle he remembers, and has another vision.

He sees a continued adventure with Rick, in which they stumble upon an underground Hydra headquarters in Manhattan, escape from a death trap, encounter more Hydra agents… and then the vision ends, leaving Cap with even more questions.

Note the nod below to Cap’s legendary stamina, which sustains him here through not only physical exhaustion but mental torment as well.

While Cap is dealing with this, several of his fellow Avengers are seemingly turned against each other, only to discover it was due to the Space Phantom, last seen in Avengers #2, who can take the form of any person (while shunting the person into a limbo dimension). (This will be important to the Cap storyline later, trust me.)

In issue #107, Cap finds the site of the hidden Hydra base from his vision…

…and has yet another one.

Cap sees himself and Rick again fighting the forces of Hydra, eventually falling victim to a shrink ray. Nonetheless, the Sentinel of Liberty finds the reserves of willpower and strength to turn the knob and reverse the effects… 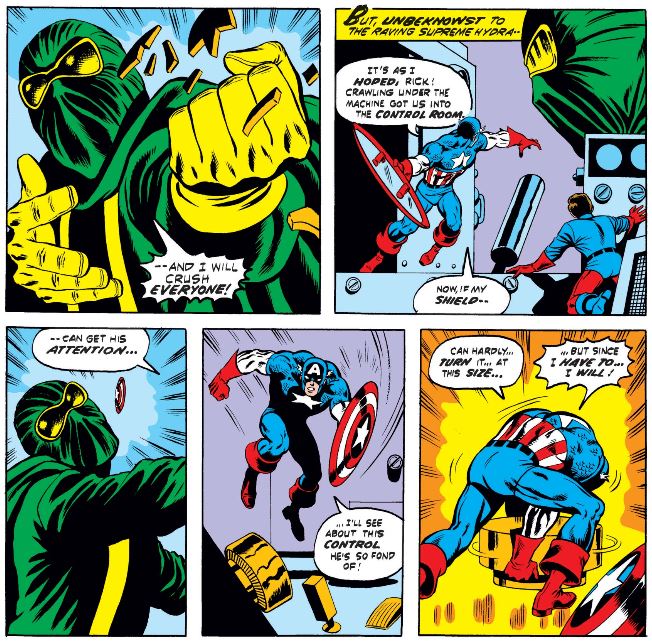 …and he defeats the Hydra leader (who earlier had admitted to impersonating Madame Hydra in the fight shown earlier and in the pages of Captain America). But just as he unmasks the fiend… 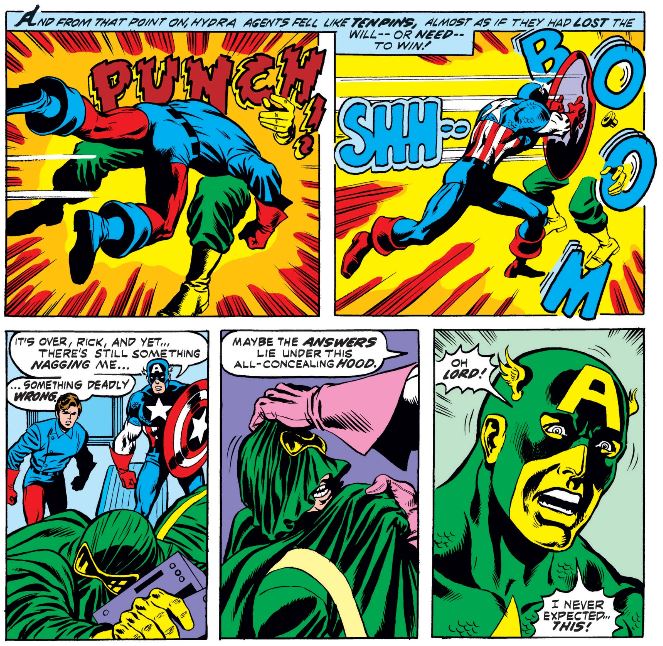 …the vision ends, leaving Cap to wonder why.

By the way, remember that skull-and-crossbones pendant that Vision was wearing in issue #106? (Scroll up and check, I’ll wait.) Continuing from the last storyline, the Grim Reaper is still trying to convince Vision to let him transfer his brainwaves—based on the Reaper’s dead brother, Simon Williams a.k.a. Wonder Man—into Simon’s body. But now, he admits that he never planned to use Simon’s body, which is truly dead and gone, but rather the body of someone very much alive…

Then the Grim Reaper details his and the Space Phantom’s grand plan… and it’s a doozy, starting with the Phantom first appearance in issue #2. We’ll jump in with the part relevant to Cap.

That’s right, dear reader—there’s a footnote to Avengers #107 in Avengers #107. (That’s the sort of thing that can rip the space-time continuum apart!)

And now we find out who was under the Supreme Hydra’s mask, and also how the forgotten Hydra battle dovetails with the Grim Reaper’s plan for the Vision, with some interesting (if confusing) ramifications for Cap’s secret identity. 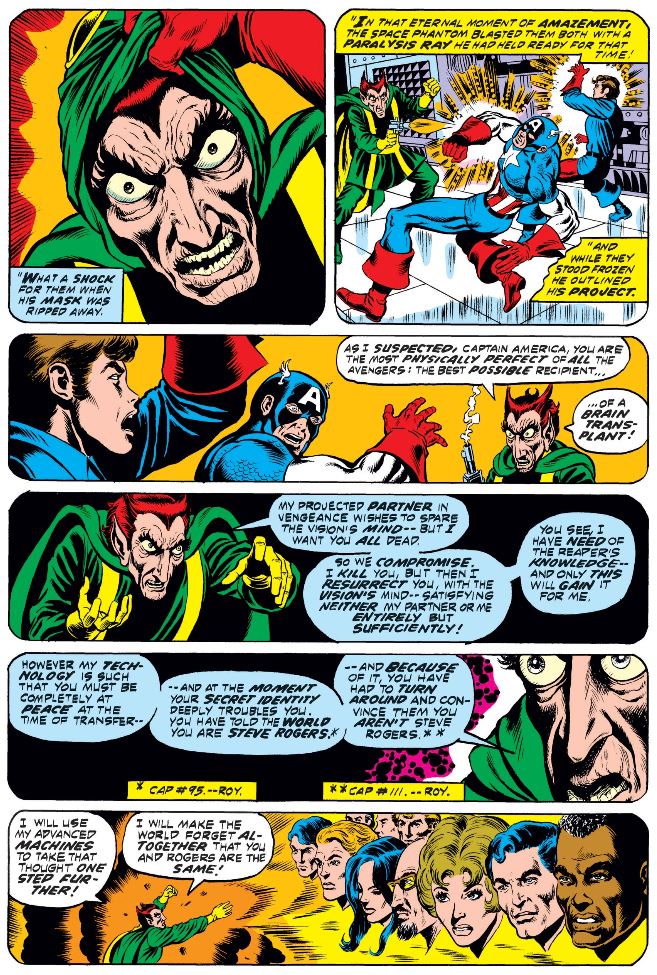 Maybe this is meant to explain why Cap slowly abandoned the idea that “Steve Rogers” was no more, allowing his secret to be maintained without eliminating that identity altogether. (Unless I’m reading too much into it.) More realistically, it does make sense, after the fact, of why the writers let his story thread slip over time. This use of retroactive continuity (or “retconning”) to fill gaps in past continuity is very much a hallmark of Roy Thomas, whom Englehart admits he was emulating on his early Avengers stories (and can also be seen in the explanation of the 1950s Cap in Captain America #153-156, mentioned above).

So it looks like it has all worked out for you, Reaper, especially after the Vision agrees (!) to the Reaper’s plan.

OR HAS IT? In issue #108, Cap bursts in on Reaper and the Vision, who together easily defeat the villain, and Vision explains why he said yes to such an abominable scheme.

The rest of the issue has the Avengers in battle with the Grim Reaper and the Space Phantom, with Rick Jones coming to the rescue (again) as Captain Marvel, the Vision realizing he has brotherly feelings for the Reaper… and he and Wanda acknowledging, at last, their feelings for each other. (Other than that, nothing much happened!)

All collected in: Marvel Masterworks: The Avengers Volume Eleven