With this issue, the Captain America series launches an examination of “Who is Steve Rogers?”, which unfortunately is not the sort of juicy existentialist dilemma that might interest us here, but merely a matter of Captain America being unable to remember anything about his life before Project Rebirth transformed him into the Sentinel of Liberty. Although the journey itself is instructive and involves lots of four-color hijinks, the answers Cap finds are… not accurate, to say the least, for reasons to be revealed much later. (I’ll flag those “facts” when they arise—I wouldn’t want to be accused of disseminating false information!)

For the time being, this issue reCaps his history so far, reconciling many of the new aspects introduced into his background since his origins were first told, including the “substitute” Captains America we already met in Captain America #153 and What If? #4.

We start with this two-page spread, a tribute to New York City courtesy of guest penciller George Tuska, as Cap and the Falcon rush to the top of the Empire State Building to celebrate the return of Cap’s sight, which he lost in issue #213. 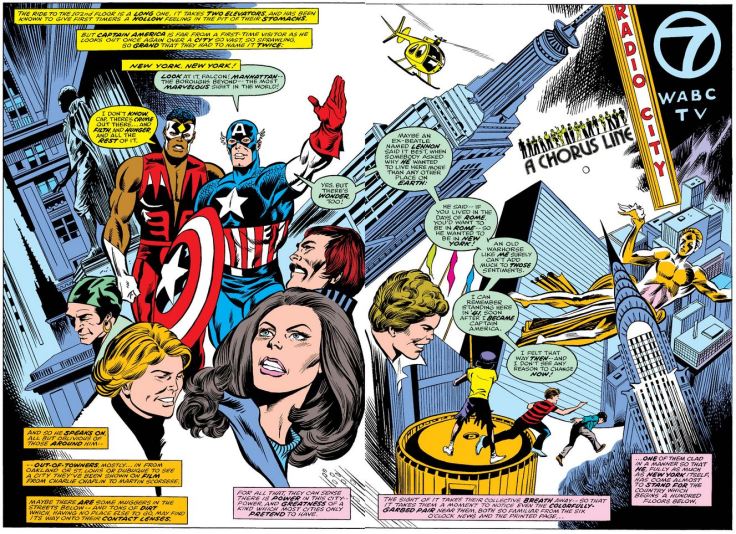 Of course, two superheroes in full costume in one of the most popular sites in the Big Apple attract some attention, and Cap gets yet another chance to be coy about the origins of his shield, as well as give a simple answer to a simple question. 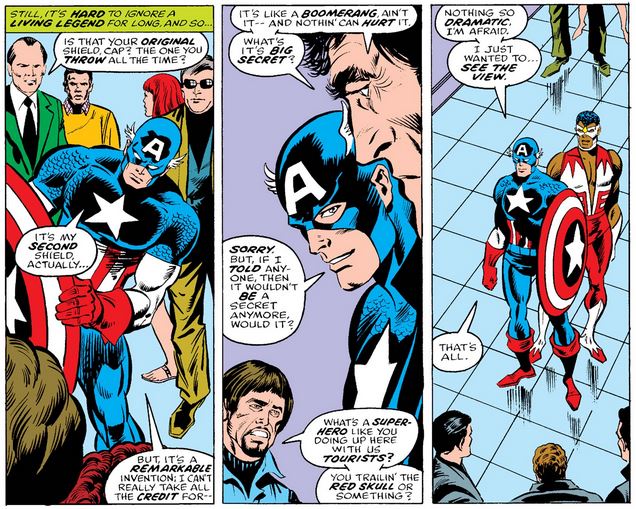 Luckily for Cap, his press agent stops him from giving too many answers, at the risk of alienating his public—a sincere concern of Cap’s…

…and for good reason, it turns out.

Liar… no one’s into Nova.

As we saw, Cap starts reminiscing, but his memories start with his unsuccessful attempt to enlist, followed by the now-familiar scene of Project Rebirth, when the super-soldier serum and Vita-Rays combined to transform scrawny Steve Rogers into Captain America, after which we see the following page explaining his relationship to his country. (The “it” in the first text box refers to the war and the fight for freedom at its heart.) 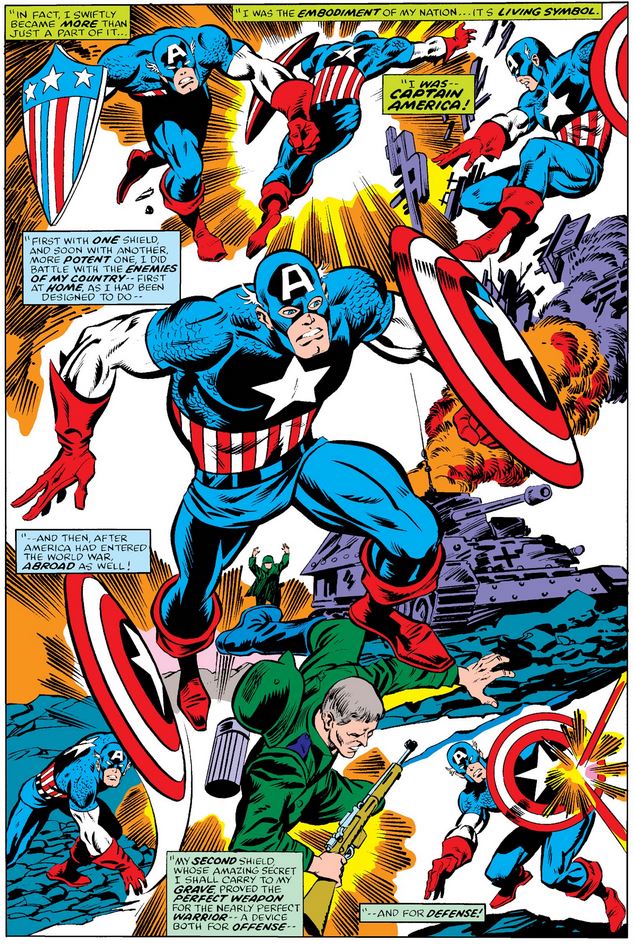 Again with the shield… a mystery that will last until issue #303.

Below we see another famous scene, followed by an early acknowledgment of Cap’s loneliness (a regular theme after his return in the 1960s), which would be further helped by his joining the Invaders soon thereafter (also shown in this issue, though not here). 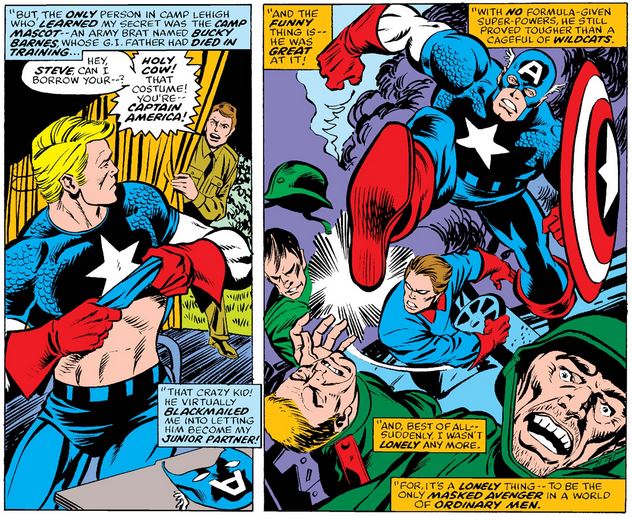 Below is yet another famous scene, which I include mainly for the final panel, showing Cap’s thoughts as he plunges into the deep, thoughts he would wake up to two decades later and dwell on for years afterward. 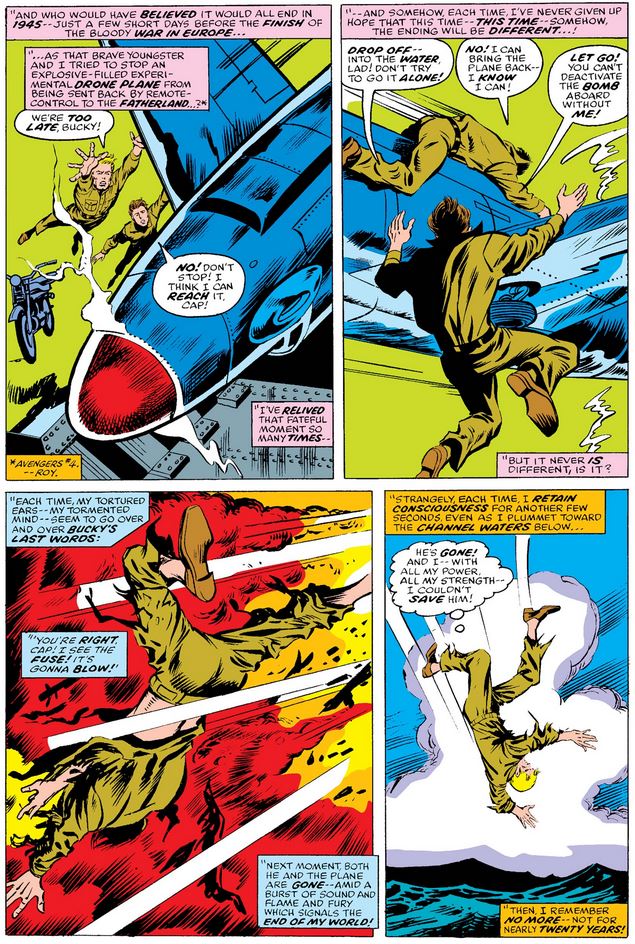 (More will be added to this part of the story in issue #220 to explain a nagging geographical detail… not as long a wait as the composition of his shield!)

Next we see, in short order, the events of What If? #4 with respect to Steve Rogers’s first two replacements, William Naslund (the Spirit of ’76) and Jeff Mace (Patriot), retold in Cap’s own book for good measure (in case anyone passed on the What If? story because they assumed it would be noncanonical like the rest of the series).

Next, we get an abbreviated version of the saga of William Burnside, the 1950s Cap, whose sad story was told starting in issue #153 (although his real name would not be revealed until 2010!)…

…and ending in issue #156 with Cap’s terrific “there but for the grace of God go I” moment.

As we catch up to the current day, Cap references his identity crisis as well as the loneliness he’s felt since first suiting up in 1941 (which was apparently triggered again by his fight with Burnside)…

…and the topic of his new quest, to discover who Steve Rogers is (and was). 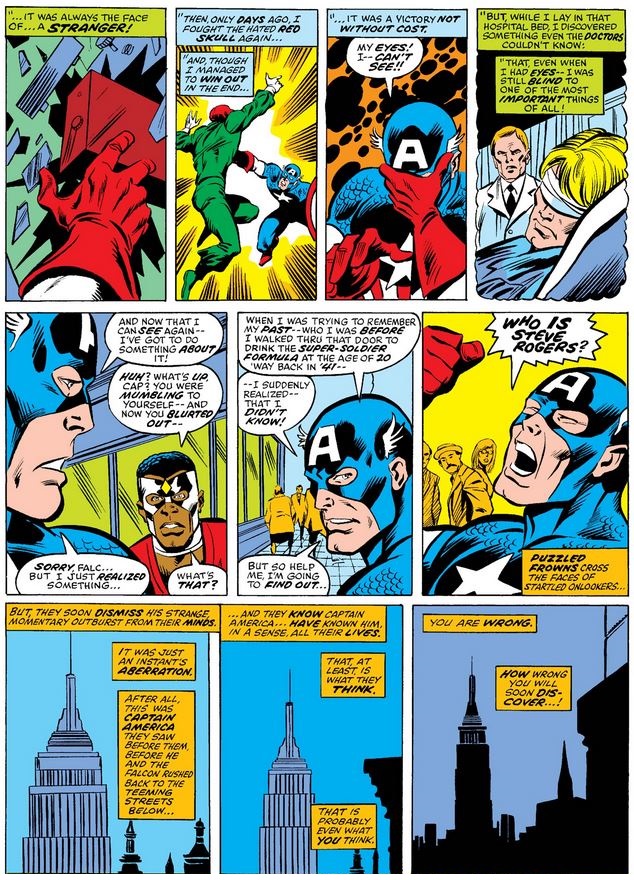 Quite an ominous ending, suggesting that everyone thinks they know who Cap is but they actually don’t—when the fact is, at this point no details about Steve Rogers’s pre-Cap life had been given in the comics, other than some oblique references to his having grown up in New York. (And the facts we’ll get soon ain’t so factual.)