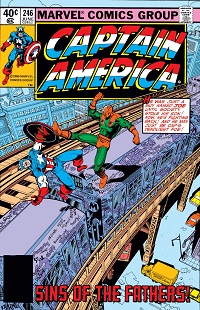 In this issue—a fill-in before the legendary run by Roger Stern and John Byrne begins in the next issue—Captain America once again encounters a villain with more to his story than he initially appreciates, emphasizing the theme of mercy made at the end of the last issue.

The issue opens with a NYC school board member being hunted and beaten by the masked villain of the story, before shifting to a scene of Steve Rogers, working artist, and his neighbor—sorry, good neighbor—Josh Cooper.

Steve welcomes him in, picking up on his new friend’s distress, and Josh tells him the heartbreaking story of one of his students.

One of the ways in which Cap’s humility often manifests itself is in recognizing the quiet heroism of the people around him, as he does above with Josh (while perhaps also thinking of his former partner, superhero and social worker Sam Wilson).

Josh takes Steve shopping at the Chamber Street Market, where Josh unknowingly contributes to a classic “how old is Steve” gag…

…before Steve sees trouble and excuses himself to change (maybe in a phone booth?). This is something we’ve rarely seen before now, because we haven’t seen Steve Rogers out in society as a “civilian” very often to this point.

When he catches up with trouble, Cap finds our masked attacker from earlier, ransacking the local Social Security office—which Cap might take very personally, given that he’ll be eligible for benefits soon!

(The great shot of Cap above gives me a chance to point out the pencils of Jerry Bingham, who also drew Black Panther #14-15, and whom I remember best for drawing Batman: Son of the Demon.)

Despite his confidence, Cap seems to be caught by surprise by this guy, although he bounces back. 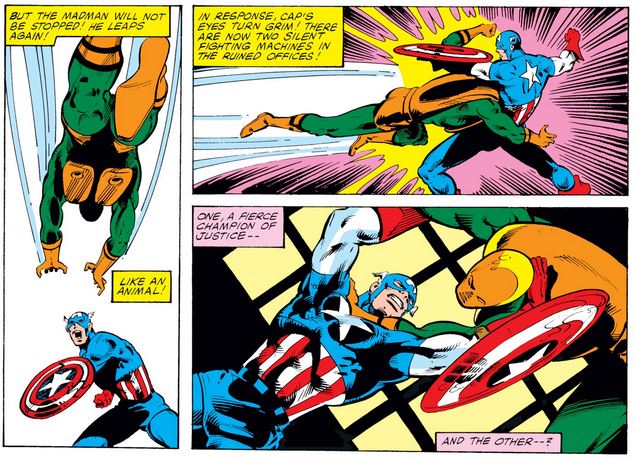 …which apparently “has always scared Cap,” although I don’t remember this being mentioned before.

Even if it isn’t established, this is an interesting thought (at the risk of giving this single line of exposition too much credit). Cap is a very sympathetic and empathetic person, which makes him more likely to try to connect with other people and imagine what they’re thinking, which is made more difficult by “madness” that he cannot understand. Also, from a fighting perspective, it makes a person’s actions less predictable, which may make a strategic combatant like Cap uneasy (if not “scared”).

All of a sudden, the man releases Cap, grabs a billing machine and throws it out a window, then plunges out the window himself…

…deepening Cap’s quandary over the man’s state of mind. (He did, however, land on his feet and flee.)

After discussing the case with the police, including the earlier assault on the school board member, Cap suspects who the man is—suspicions that are confirmed after talking to Josh about his student who died, as well as the child’s father, a minor super-powered Spider-Man villain, who felt wronged by the system that failed his son… 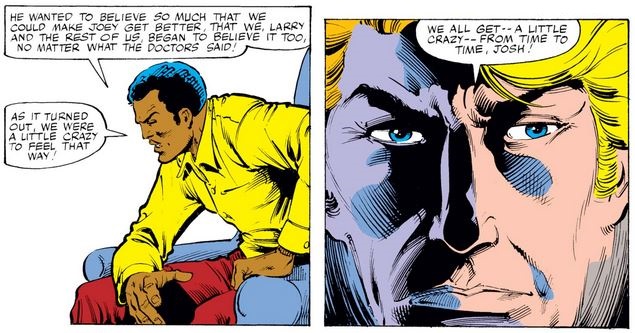 …which starts to bring the father’s “madness” into perspective for Cap, and this makes him even more sympathetic when they once again face each other.

Cap tries to calm Joe down and appeal to him, treating him less like a madman and more like a grieving father, which allows him to connect with Joe on a personal level by drawing on his own experiences with grief and guilt. 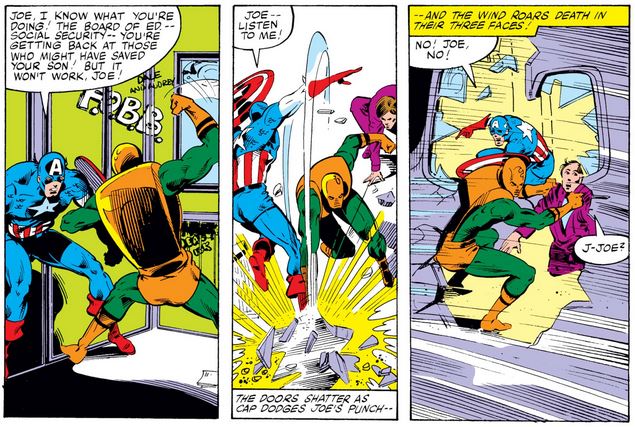 Cap finally gets through to Joe…

…and makes an impassioned plea in support of taking issues of mental health as seriously as physical health (and, if I may extrapolate a bit, improving the bureaucratic systems of delivering both). 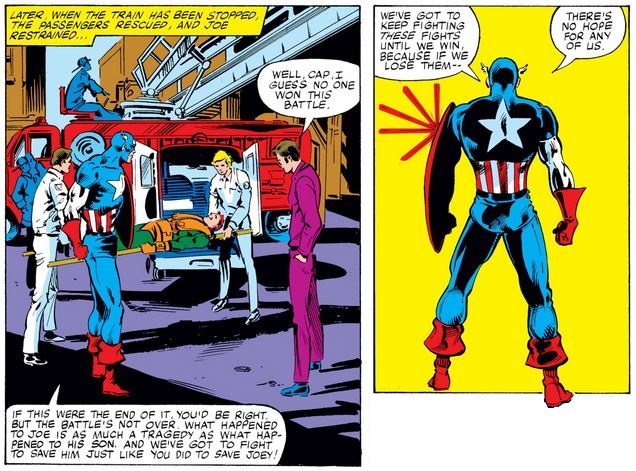 At the end of this issue, the letter column features a lengthy and thoughtful reply regarding Cap’s politics and philosophy from editor Roger Stern, who will start writing the book with the next issue in conjunction with penciller John Byrne in a short but fantastic run that establishes and solidifies Cap’s backstory and origin once and for all. Stern would go on to reiterate and expand on these thoughts, most prominently in the written introduction to the trade paperback collection of his run with Byrne, but this response below is a good preview (with which I agree completely, as you can see both at this blog and in my book).