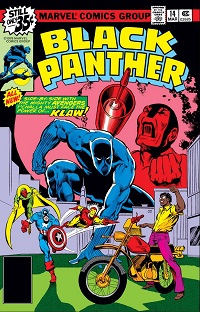 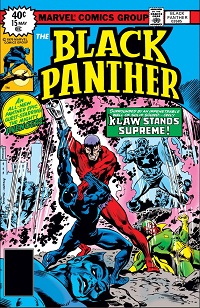 This pair of comics, featuring Captain America and several other Avenger teammates of the Black Panther, are the last two issues of T’Challa’s first series under his own name, written and pencilled by co-creator Jack Kirby for the first twelve issues (at the same time that he was also writing and drawing Captain America and several other titles), with the series finished by Ed Hannigan and Jerry Bingham (including three issues of Marvel Premiere, #51-53, that wrapped up their ongoing storyline).

Issue #14 opens, in a way, where the recent film ends, with T’Challa opening Wakanda to international relations and commerce, starting with the American delegates to the United Nations. As they leave, several of the Avengers take their place, with Cap silently impressed with the headquarters of the Wakandan mission and the Panther remarkably open about the matter of his negotiations. 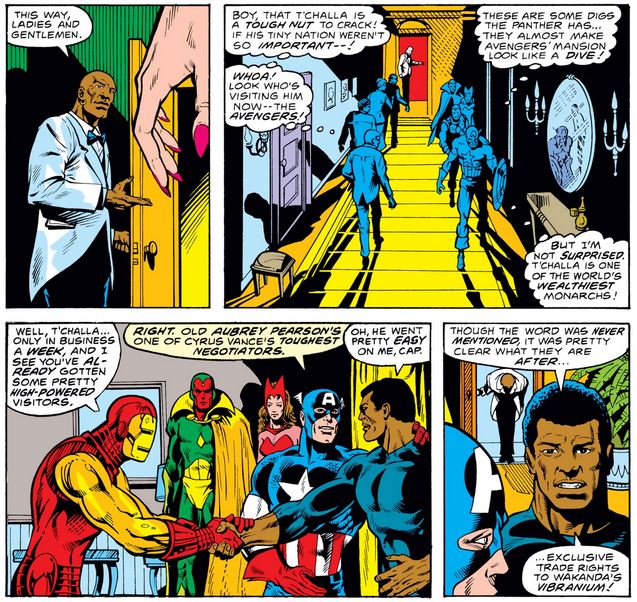 After the heroes have chatted enough, the Avengers get up to leave, but T’Challa asks one in particular to stay behind—the one he’s known longest, ever since Tales of Suspense #97 (Black Panther’s first appearance outside Fantastic Four).

Once they’re alone, T’Challa shares some recent experiences that resulted in a sort of  “panther sense,” with a much larger scale than Peter Parker’s… 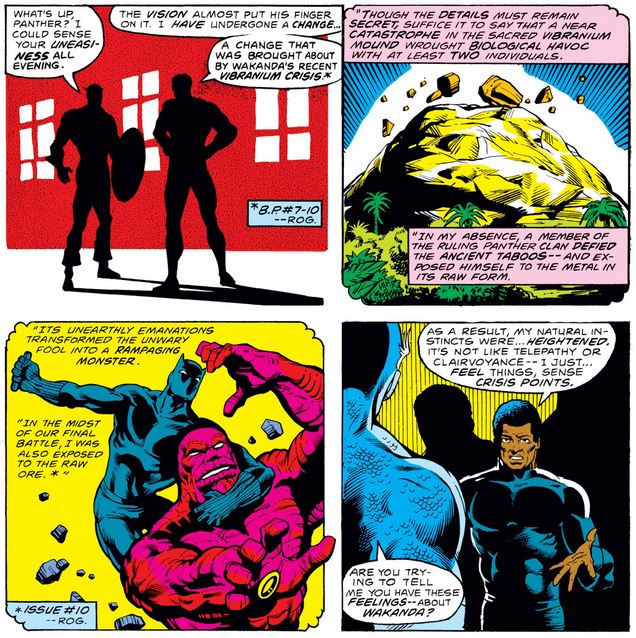 …and with some disturbing political implications that Cap is more than happy to expand on and warn his friend about (based on a role they share). 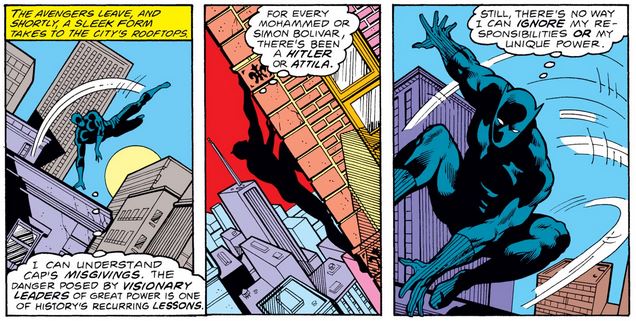 …until he sees someone he recognizes in the crowd below: none other than his archfoe Claw, in plainclothes and under attack from muggers. After Claw is shot and the muggers escape with his weapon (the sonic horn), T’Challa takes him to the best urgent care in the city. 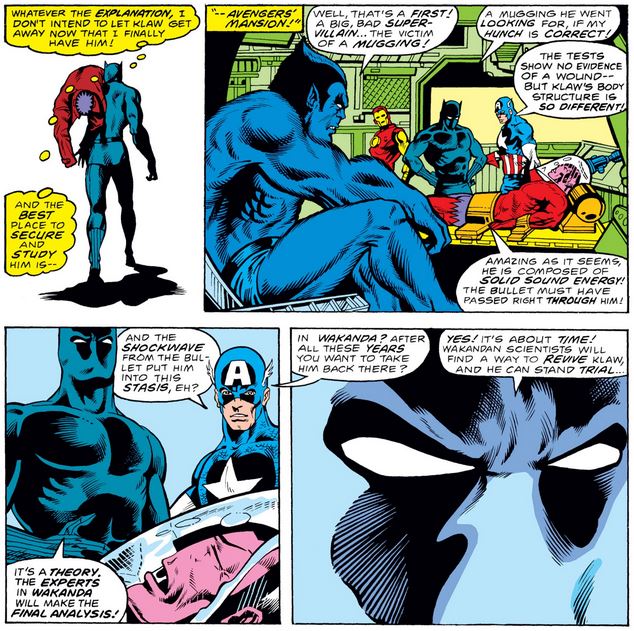 In the next panel he concludes, “…for the murder of my father.” This leads into his recounting Klaw’s origin and history to his fellow heroes, ending with his first adventure with the Fantastic Four. 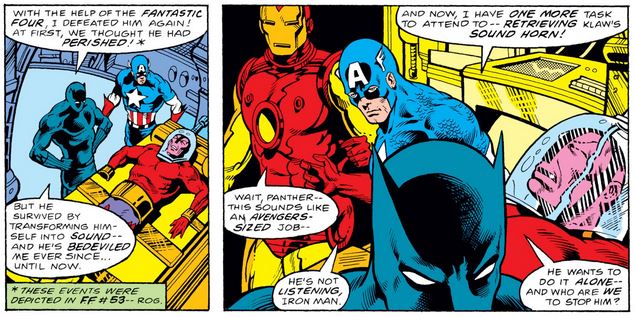 Naturally, Cap respects his friend’s choice to go after Klaw’s weapon by himself… but that doesn’t mean he won’t follow closely, which is especially fortunate when one of the muggers’ partners uses the sonic horn to create a monster made of solid sound that threatens to make off with the Panther. 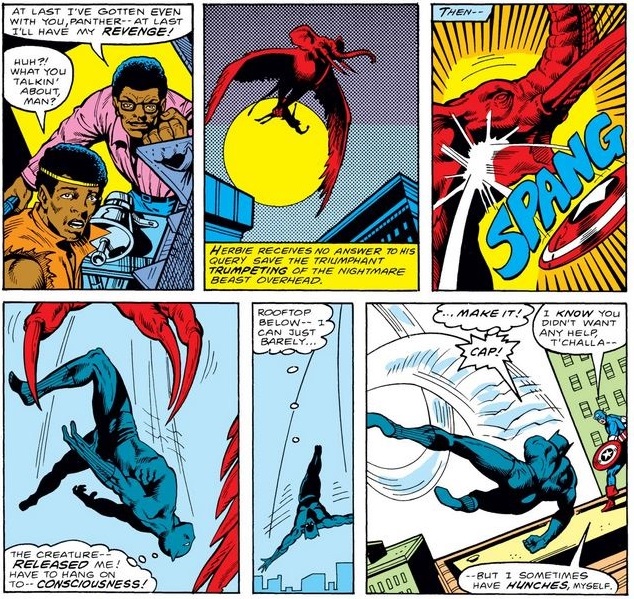 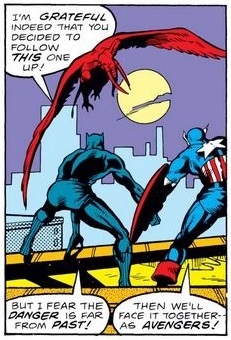 As issue #15 opens, our two heroes continue to fight the sound creature, and while Cap urges T’Challa to save himself and warn the others, T’Challa shows a keener appreciation for Cap’s shield than Cap does. 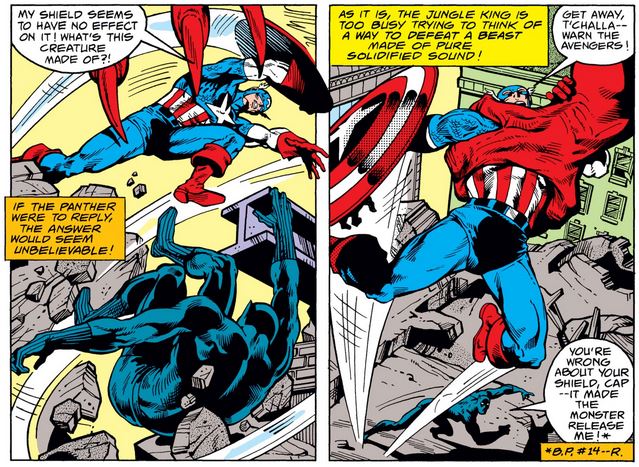 Cap gives it one more shot, and as the Panther catches the shield, he has another hunch, this time about its composition (and he’s not wrong, as we’ll find out later). 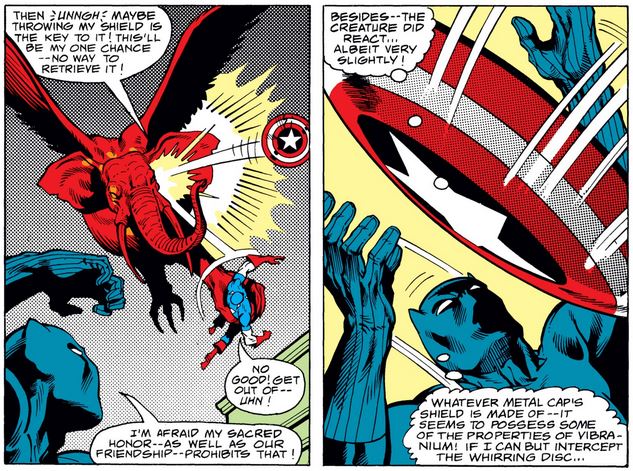 “Sure, I’ll try to throw it… how hard can it be?” Apparently not very, for the Black Panther! 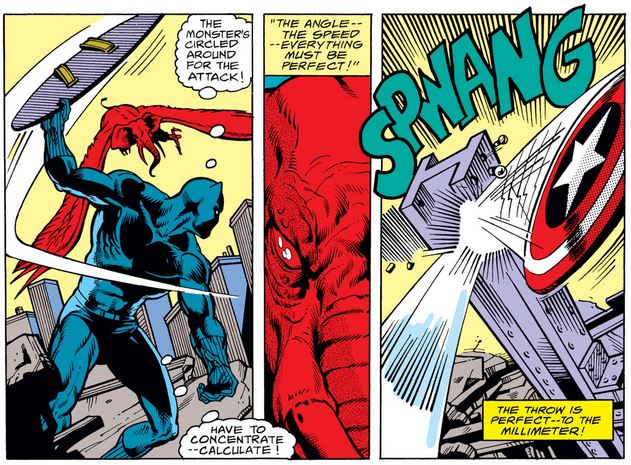 Cap is duly impressed, not just by T’Challa’s aim but also his deduction about the qualities of the shield itself. 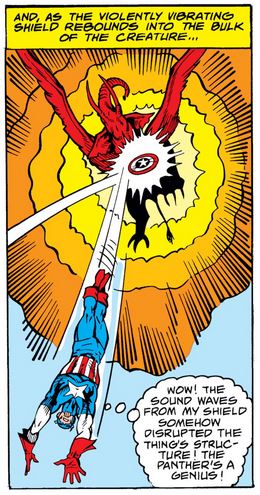 While the rest of the Avengers find themselves in battle with more sound creatures, Klaw frees himself and eventually fights the Black Panther, and this time it’s Cap that wants to help and the Vision who holds him back. 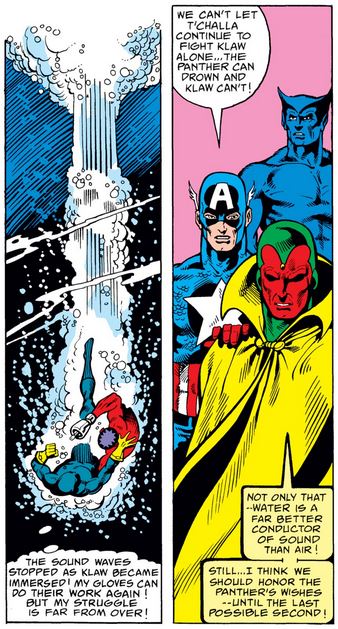 Eventually T’Challa turns the sonic horn on Klaw himself, leading to a blast that allows the Panther to escape—and swear to find him should he re-emerge (which Beast does not think important at this particular juncture). 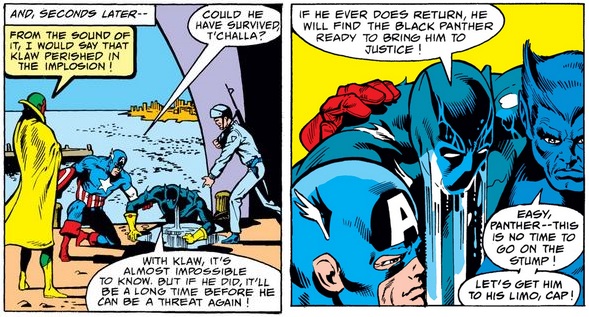 Klaw does return fairly quickly, his consciousness having been trapped in his sonic horn after the blast and later re-emerging in Marvel Two-in-One #57 (November 1979).