As we continue the story, begun in issue #231, of Captain America fighting the white nationalist Grand Director and his National Front, we finally learn the identity of the person behind the hate movement (who was glimpsed in silhouette in the last issue) as well as a hint as to who the Grand Director himself is (although this is not confirmed until issue #236). But all of this pales to what happens to Sharon Carter… but I’m getting ahead of myself.

Speaking of Agent 13, issue #233 opens where the last one ended, with Sharon, under the mental influence of the Grand Director and his not-too-mysterious boss, leading National Front minions against Harlem gangster Boss Morgan and his men, with Cap caught in the middle, trying to calm tensions before gunfire breaks out. 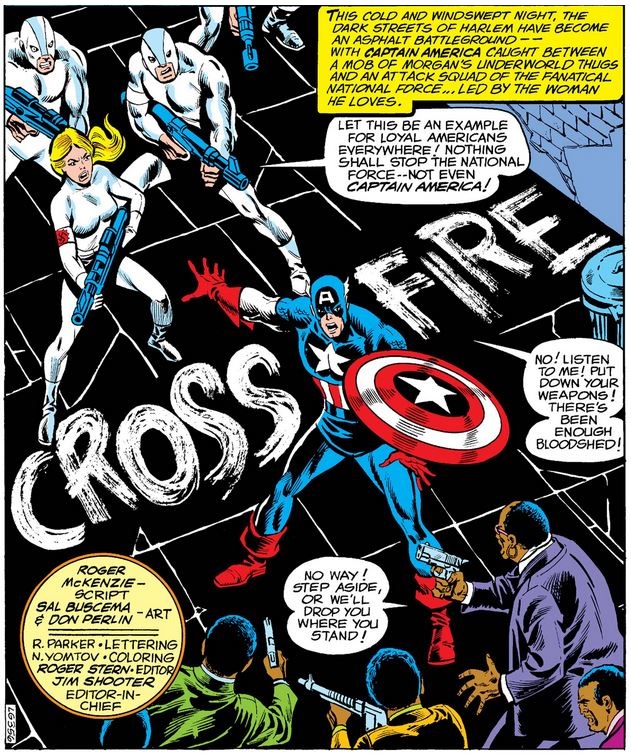 One of Morgan’s men rushes Cap, accusing him of siding with the National Force, and Cap’s easy handling of him only serves to convince Morgan he’s right.

Despite Cap’s best efforts, the two sides start fighting—three if you count Cap, who battles both in an attempt to prevent them from hurting each other more seriously—until the National Guard shows up…

…and Cap finds himself on the wrong side of them as well.

In an earlier post, I mentioned how Cap has come to expect (reasonably or not) a certain level of deference from institutions such as the police, government, and also the military—and it’s not surprising, given his “previous life,” that Cap takes conflict with the military more personally than the rest. The tense scene below is a fine example of both, ending with an explanation that balances respect for authority with pragmatic urgency.

Note also the dislike of guns that has been added to Cap’s character, I think for the first time—this will be become quite controversial in later issues.

While Cap and the major are debating ethics, the National Front agents burst into flames as they did in the last issue, and Cap is naturally concerned with one in particular. 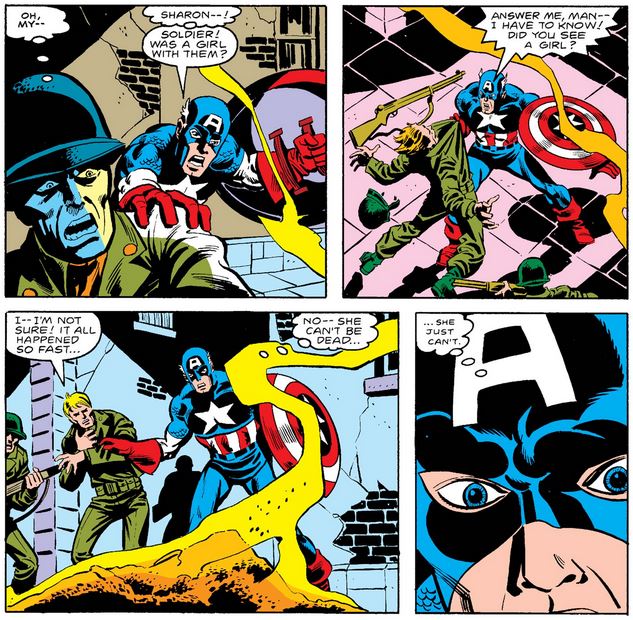 Instead of investigating Sharon’s disappearance, Cap spends his time helping victims of the fires, but still refuses to give up hope that she’s alive. (The exposition in the first panel suggests that he does his duty in part to “bury the pain,” which I think we can take to be more of a side effect than motivation.) 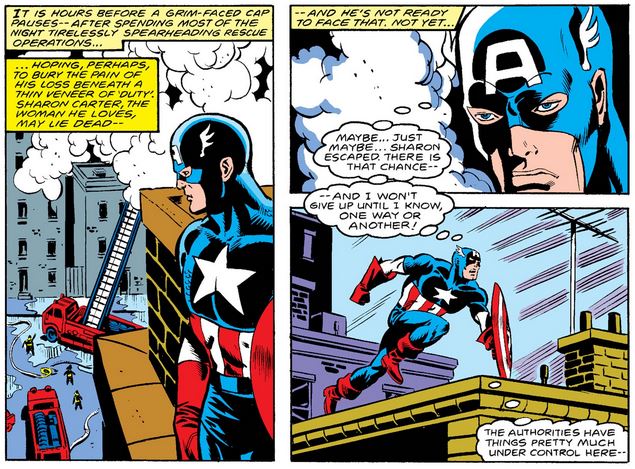 One cannot help but consider this potential loss in light of his first loss, that of Bucky in 1945, moments before his own “death” in the icy English waters, and his fear since his return of losing another partner (and this one, a romantic partner as well).

Cap checks in on the other Carter in his life—Peggy Carter, injured in an automobile explosion in issue #231 and taken to the hospital in the next issue—but it seems she has gone missing as well.

When his Avengers credentials fail to budge the nurse—keep her a break, she’s only doing her job!—Cap turns on the charm, only to be shocked by what he learns.

And such a unique name too… <eye roll>

But this fact does serve as our first clue as to the identity of the Grand Director, reinforced below by his boss, who we also learn is none other than…

…Dr. Faustus, master of mental manipulation, who has psychologically tortured Cap several times already in this comic (and blog).

He will also play a key role in Cap’s “death” in 2007 at the hands of Sharon— Wait, it’s happening already?

What’s going on? Cap went to the address of the mysterious “Dr. Steven Rogers” and found a robotic Sharon there… at least, he’s pretty sure she’s a robot (in contrast to his normal gullibility with impostors caused by his general trustfulness).

Wow, good thing he was right!

When he gets to Peggy’s room, he finds some old friends instead, but they’re even less real than the SHA-RON 3000 was.

Finally, Cap comes face-to-face with Faustus, who faults the Sentinel of Liberty for his concern for others, an attitude which is too easily manipulable—a superhero’s universal weakness, no matter how powerful they may be.

To add insult to injury, Faustus gets the best of Cap physically, due to the effects of his gas, which will make him even more susceptible to manipulation, as we will see in a very disturbing scene in the next issue.

Two more clues above to the Grand Director’s identity, but they stop short of confirming it… Do you know who it is?

No, silly, it’s not Daredevil, but he does appear in the next three issues, much to the delight of this fan—Daredevil was actually the first Marvel title I read regularly, as I recounted here long long ago (and in a rather different context).