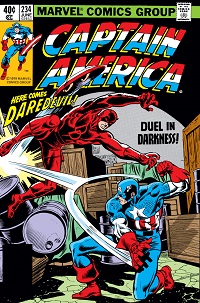 For most of this issue, Captain America is not himself, having been brainwashed by Dr. Faustus into cooperating with the white nationalist Grand Director and the National Force. It takes the help of New York’s favorite son, Daredevil, to bring him back from the brink… but not before he makes a powerful statement supporting hate and racism for all to see. Fair warning: There is some very disturbing imagery and language in this post.

The issue opens with one such scene: Cap facing an angry group of African-American men in New York City, although the exposition at the bottom of the page hints that something may be up. 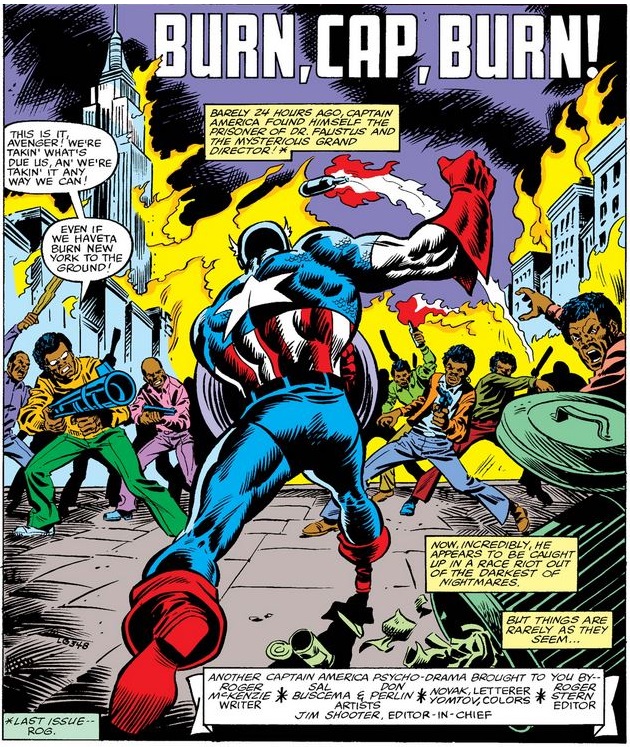 The next three pages show Cap beating the men while praising the Grand Director and spouting racist filth (some of it continued below), culminating in the revelation that the entire situation was a show for propaganda purposes…

…with Cap’s swastika-covered shield the most striking image of all (and that’s saying something, given what came before).

Soon the National Force’s film is broadcast on television, although unfortunately we don’t see the general public’s reaction, as we did the time the Red Skull forced Cap to swear allegiance to him on TV in Tales of Suspense #90-91. But we do see some familiar faces (from Cap’s recent appearance in Daredevil #155-157 if nothing else): Matt Murdock, Foggy Nelson, and Becky Blake, who are predictably shocked and skeptical.

Before long, Matt is investigating his friend’s odd behavior as Daredevil, and his unique senses lead him to the studio where the propaganda clip was filmed…

…until Matt himself is discovered by Dr. Faustus (the man behind the National Force) and the mind-controlled Cap, all too ready to give the devil his due.

Thus begins a battle royale between Cap and Daredevil, with the latter fully aware that Cap has been brainwashed, but mistakenly assuming that his strategic skill with his shield was affected as well.

While Faustus shows keen insight regarding Daredevil’s sight (or lack thereof), Matt uses other senses to divine what’s on Cap’s shield, as well as how it might be removed… 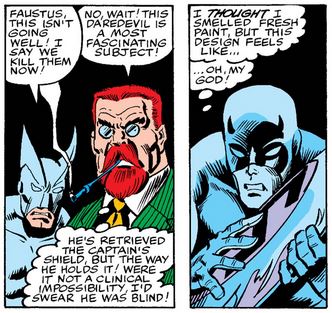 …although that seems to happen by happy accident while Matt tries to remind Cap who he is and what he means.

The sight of his true shield is what breaks Faustus’s hold on Cap… just in time to face the Grand Director’s flame-thrower.