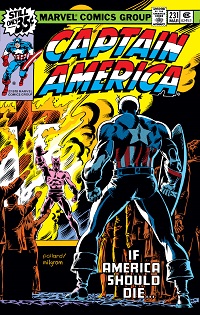 This issue begins a six-issue storyline that includes a change in Sharon Carter’s status quo, a reunion of the Winghead-Hornhead team, the return of a forgotten character, and most important—as can be seen clearly on the cover—very disturbing words and images of race hatred, always a poignant topic in Captain America stories and one that remains tragically relevant to this day.

The issue begins with the aftermath (with an exclamation point!) to the previous storyline in which Cap, with the “help” of the Hulk, rescued the Falcon and his nephew Jim from the evil Corporation. Sam once again says goodbye to Cap, this time for good (or at least for a while), although they’ll see each other around Avengers Mansion from time to time.

Cap wishes his partner well, reassuring Sam that he understands why he’s leaving, while reaffirming their friendship…

…and internally admiring Sam’s fortitude (a quality he knows well himself).

Cap won’t forget about Sam, as we’ll see very soon, but for now, he sees someone else in need—this time, a recently vanquished foe who, Cap feels, does not deserve the treatment she’s receiving from a S.H.I.E.L.D. agent. 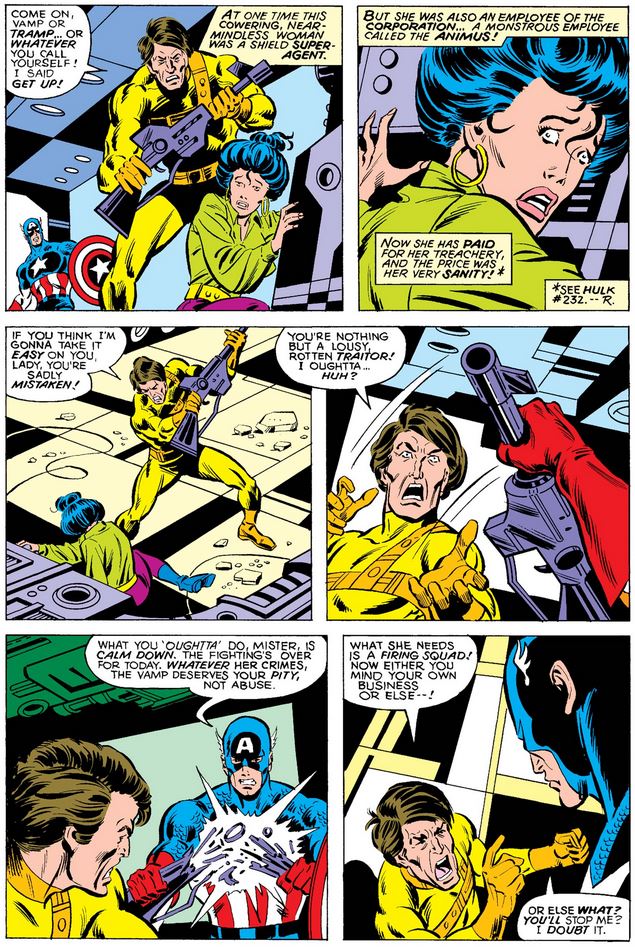 This is a striking example of Cap’s capacity for sympathy, which he extends not only to innocent victims of crime but also those criminals who are, in a way, victims themselves.

Below, this sympathy is joined by defiance in the face of increased S.H.I.E.L.D. aggression, with Cap keeping his cool, not even raising his shield, even with several guns pointed at him.

Given her precarious state of mind (echoed in the narration in the fourth panel below), it is difficult to interpret Vamp’s expression here, but I think it’s safe to assume it contains both gratitude and surprise at Cap’s kindness and protection. 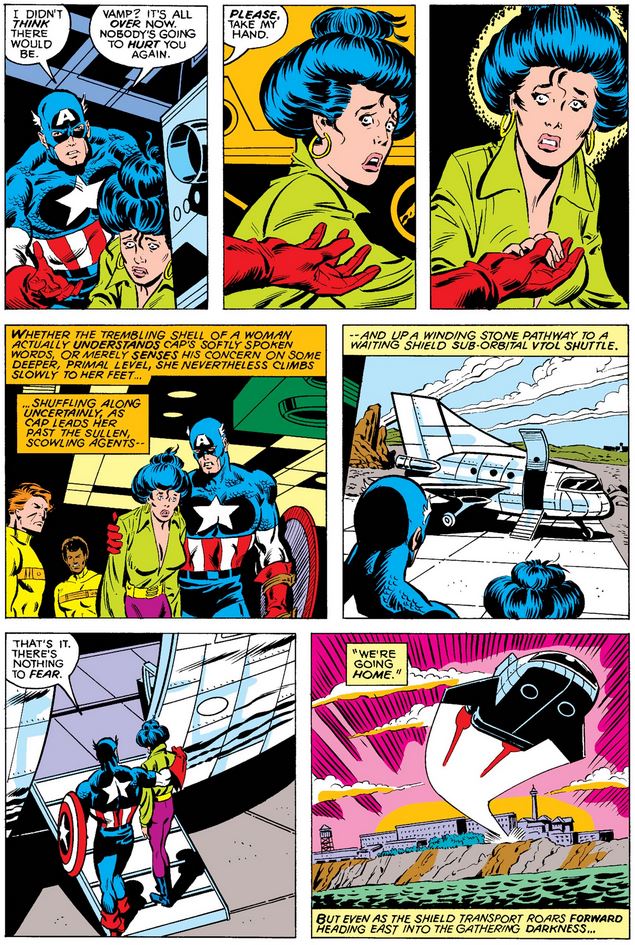 After Cap hands Vamp over to more reasonable S.H.I.E.L.D. agents, his thoughts return to his own life, even if only momentarily, before he encounters yet more hostility from his former chums.

It’s astonishing that Cap retains any allegiance whatsoever to S.H.I.E.L.D. considering how they’ve treated him over the years (even at the hands of Nick Fury himself). The exchange above also makes me think about the deference Cap has come to expect from many institutions—including the police, military, government, and S.H.I.E.L.D.—due to his record of service, even as his trust in them has eroded, and his resentment of them has grown, in recent years.

(And don’t forget this Stanford fella… he’ll show up in Avengers before long.)

When Cap finally returns home, he offers up the best excuse ever for a messy apartment.

(And don’t worry, Cap, you’re not the only one with mixed emotions.)

As he often does when at home—as rarely as that is—Cap reflects on his life, or lack thereof, as well as the all-too-normal need for income. (I have no clue why he took his top off, but not his boots, to do housework, but he gets points for worrying about bothering his neighbors.) 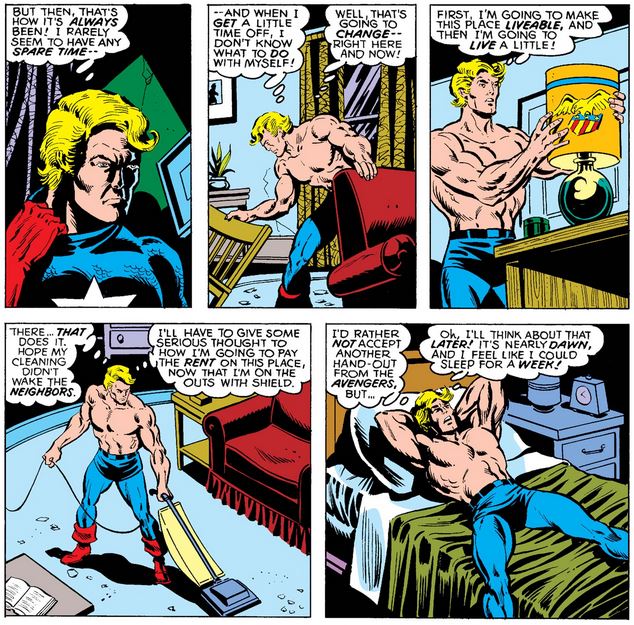 Alas, Cap cannot sleep, so he puts his top back on and heads out to check on Sam, whom he hasn’t seen for a whole ten pages. He starts to catch up on the local news, which hints at the larger storyline to come, when he’s interrupted by a shadowy figure straight out of a film noir.

Relax, Cap, it’s a dear old friend, who reminds Cap about the person he should been checked on instead of picking up Sam’s mail. 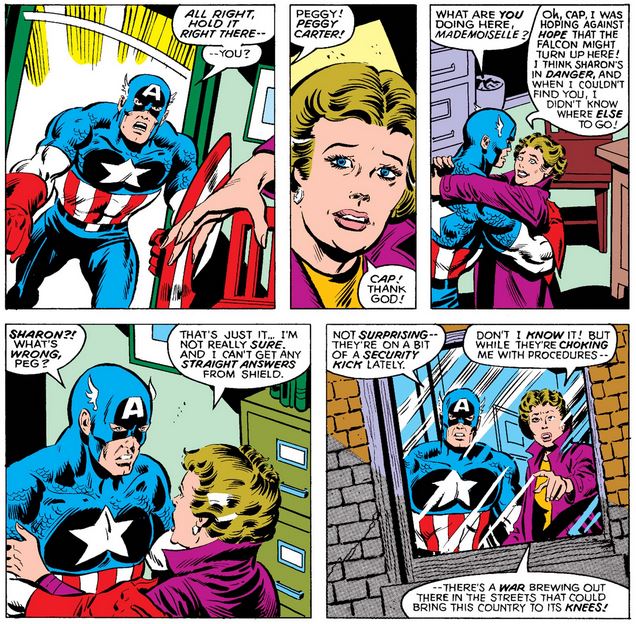 Peggy saves Cap the trouble of finishing the newspaper story, telling him about the white power group the National Force and their leader, the Grand Director, whose rhetoric and tactics sound all too familiar to Cap (and, sadly, to us in the 21st century as well).

The police try to protect the free speech rights of both the National Front and the protestors, but once the Grand Director lights a cross on fire, they start to lose control of the situation… especially when the protestors have a sudden change of heart. 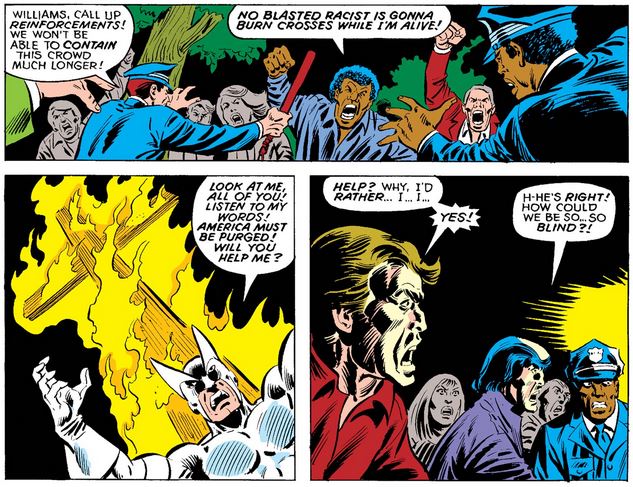 Sharon and other S.H.I.E.L.D. agents, originally there to help the police keep order, also fall under the sway of the Grand Director.

Peggy explains how the fighting got worse until the riot squad arrived, by which time the Grand Director and his thugs had fled. When Peggy says they have to find them, Cap responds with determination and disgust, as well as protectiveness, making Peggy’s heart sing…

…perhaps for the last time? We’ll find out in the next post.