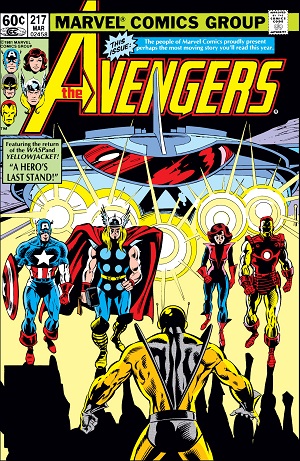 This issue is centered around the downward trend in Hank Pym’s life, but also contains some interesting moments for Captain America, as well as two significant changes for Janet van Dyne, aka the Wasp. (Normally I wouldn’t have dedicated an entire post to this issue, but it fell between two more significant ones, so I had no choice. Consider it half-price!)

Our story opens with a bit of humor, as the Mechano-Marauder, a self-proclaimed “threat,” can barely get any attention from the mighty Avengers.

Even the phone guy’s only annoyed!

Iron Man draws the short straw, and considers the Mechano-Marauder enough of a danger to unsheathe his greatest weapon: his roller skates. 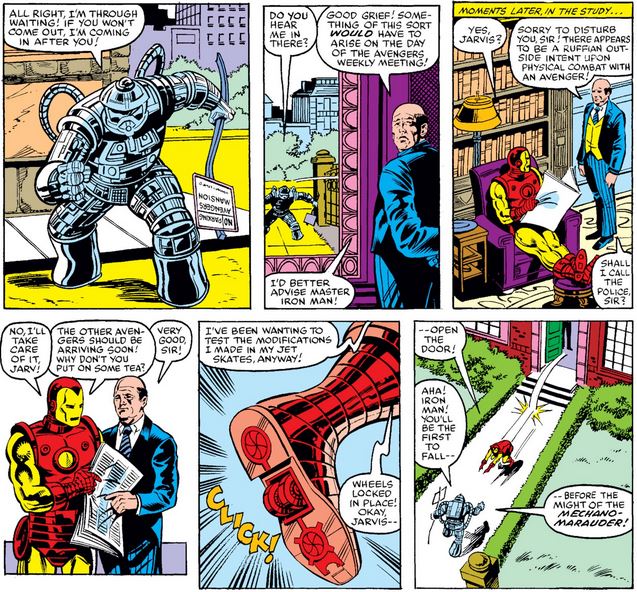 Tony’s offended at the Marauder’s feeble attempt at armor, and he doesn’t even make Janet blink.

…and Cap has some fun with the car the Marauder just tossed, more concerned about the meeting to come than Iron Man’s “battle royale.” 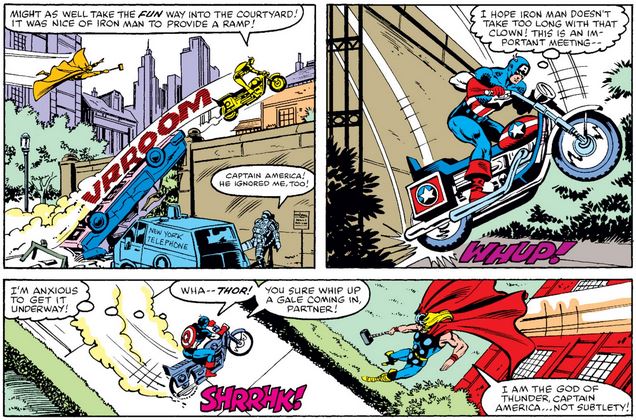 That should rally be Thor’s tagline!

Inside, Janet drops a bomb on Jarvis…

…and then, freed from her conflicted relationship with Hank Pym, asserts herself as an founding Avenger equal to any other in the most forceful way possible, eliciting some interesting reactions (including Thor’s appreciation for her lack of subtlety).

As we would expect, Cap has the least amount of reservation of the three, and what reservation he does have come from concern, not doubt. I hope it doesn’t spoil anything to reveal that Janet has a long and distinguished tenure as Avengers leader, with Cap’s full support (and help, when he’s asked).

The rest of the issue deals with Hank Pym, who’s down on his luck and at the end of his rope, so much so that he accepts a job from his old foe Egghead to deliver a robotic arm to his niece Trish, who won’t speak to him after he inadvertently took her original one. But after he attaches the arm, Egghead uses it to control Trish and, by extension, Hank, by threatening to kill Trish if he doesn’t play along.

On Egghead’s orders, Hank helps Trish steal some adamantium from the military… but  who should come to investigate but the Avengers. (It’s not always easy to be sympathetic toward Hank during this period, but he deserves it here, having been suckered by Egghead and then having to face and fight his old teammates to try to save Trish’s life.) 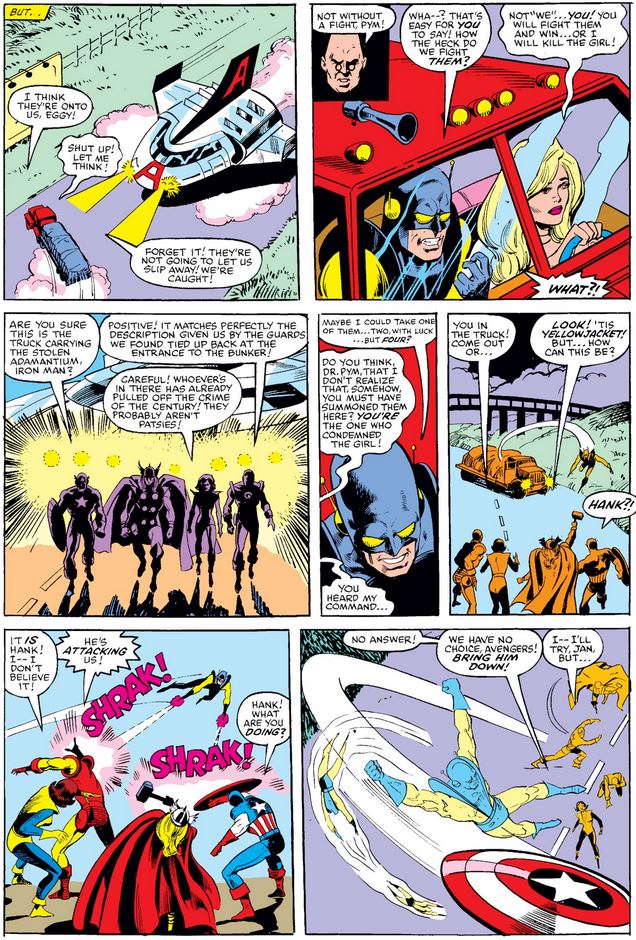 Check out the master strategist, who “figures” that the guy whose power is shrinking would shrink, forces the same guy’s ex-wife to defend him, and then never thinks that he’d hitch a ride on the mighty shield. 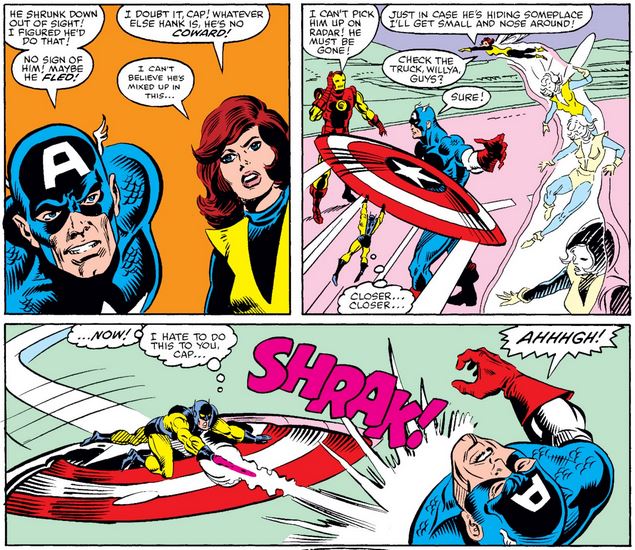 Cap’s obviously off his game, helping Hank to hold his own against the team: Watch him actually defeat Thor with a surprise enlargening, which Janet then uses against him… 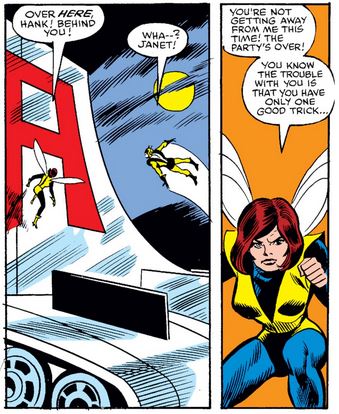 …setting him up for the inevitable and embarrassing defeat at the most lopsided game of handball ever, after which he tells his chums about Egghead’s plans and how they can save Trish’s life. 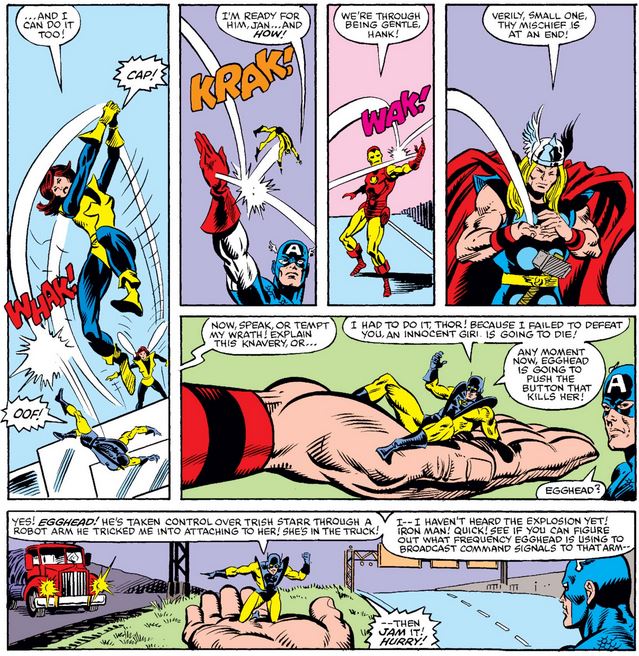 Gee, you could have told him to do that a long time ago, Hank. But once again, he elicits sympathy after he looks foolish in front of his friends, thank to Egghead, 1) who stops transmitting to the robotic arm once it was clear Hank would lose; 2) who never put a bomb in the arm, which Tony discovers when he examines it, and 3) who erased Trish’s memories of Egghead, so thinks Hank gave her the arm and controlled her through it.

As a result, Hank once again finds himself accused of wrongdoing, with two important differences this time around: 1) It isn’t his teammates he must answer to, and 2) he actually did nothing wrong (for the most part).

Collected in: Avengers: The Trial of Yellowjacket.