This issue of Captain America continues the story started in the last issue, after Cap traveled to a castle in Mexico to find his childhood friend Arnie Roth and his boyfriend Michael Bech and was confronted by a number of his enemies, two of whom are presumed to be dead. In the same issue, we also have a continuation of Sam Wilson’s exploration of his past life as criminal “Snap” Wilson, and we finish with a few high-action panels and pages from Fantastic Four #250, which once again sees John Byrne draw (and write) the Sentinel of Liberty. I love the emotion and kinetic energy current Captain America penciller Mike Zeck gives him, but Byrne grants him a certain nobility that has rarely been matched.

(By the way, the cover to this issue is an homage to Neal Adams’s cover for Detective Comics #395—I can’t believe I never realized it before “Comic Book Worm” pointed it out on Twitter.)

Captain America #277 opens with the gathered foes facing down our hero, who states the obvious.

Someone’s jealous, but Cap doesn’t take the bait. (He might be playing with Zola, who did appear to die in issue #212—maybe Cap heard that he re-emerged alongside the Red Skull in June 1980’s Super-Villain Team-Up #17 before joining Zemo here.)

I think Cap was actually expressing sympathy for Zola’s creatures but, regardless, on their master’s urging they attack, and Vermin wants to join in, but Zemo has other plans. Cap may not “make deals,” but he does respond to incentives, especially when they involve an innocent person’s life (not to mention one of his oldest friends). 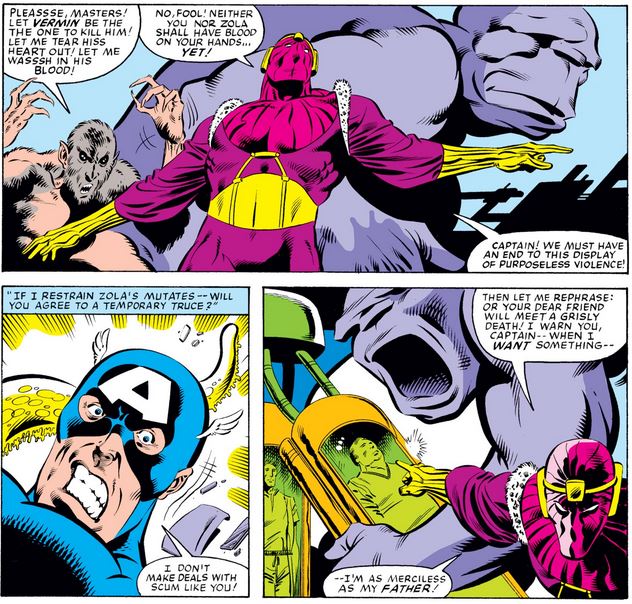 So that solves the question of how Zemo is still alive… and even better, he’s someone we’ve seen before (all the way back in issue #168).

The young Zemo tells the story of his parents and his youth, ending (below) with his father and how he died, which Cap resolutely refuses to take responsibility for, charging the elder Zemo with choosing his own evil path and implicitly accepting the consequences of it.

That’s what he should have said, but instead, he agreed with his fellow villain… as does Cap.

Zemo Junior explains how he escaped from the vat of Adhesive X he felt into in issue #168… but there was just one hitch. 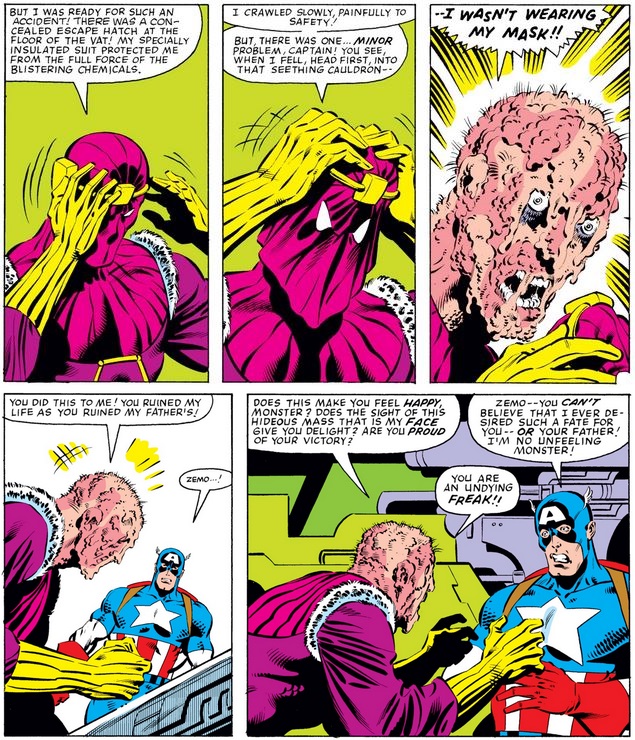 Even while he stares the younger Zemo in the face, Cap still refuses to take responsibility for his tragic circumstances… but neither does he take joy in it (much less the elder Zemo’s death).

But Zemo takes it even further, enough to make Cap reconsider his culpability in Zemo’s maniacal hatred. 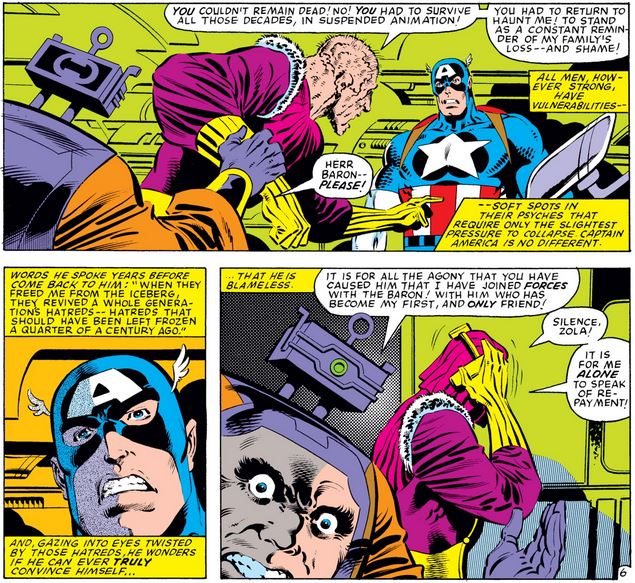 In fact, he spoke those words at the end of issue #168, in the same circumstance…

…and it still makes little sense, representing yet another example of Cap’s outsized sense of responsibility (which admirably did not extend to the elder Zemo’s death).

Below, in a nicely laid-out page by Zeck, Zemo outlines his plan, which strikes at the heart of what Cap has been trying to do the last several years on this book. 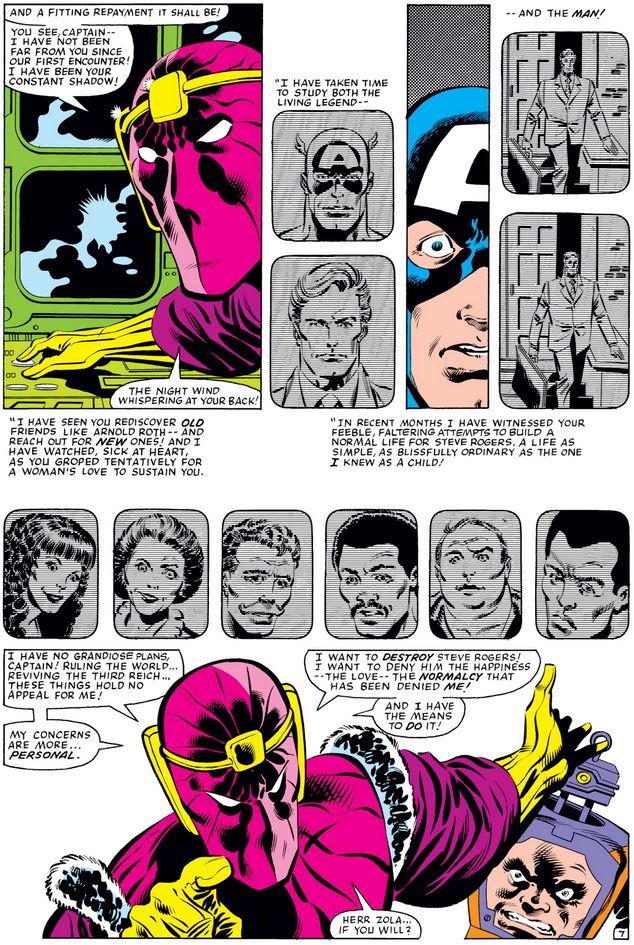 Now it is Arnim Zola who has a surprise for Cap: He’s not Zola at all, but someone else we remember (from issues #209-210) who was also presumed to be dead. 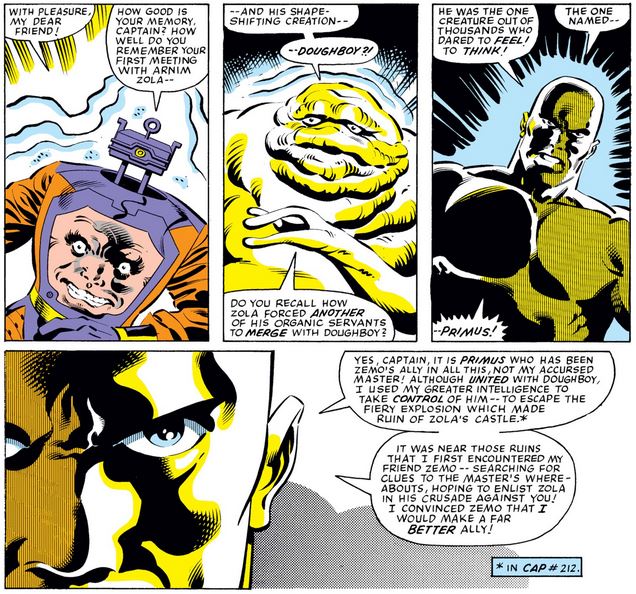 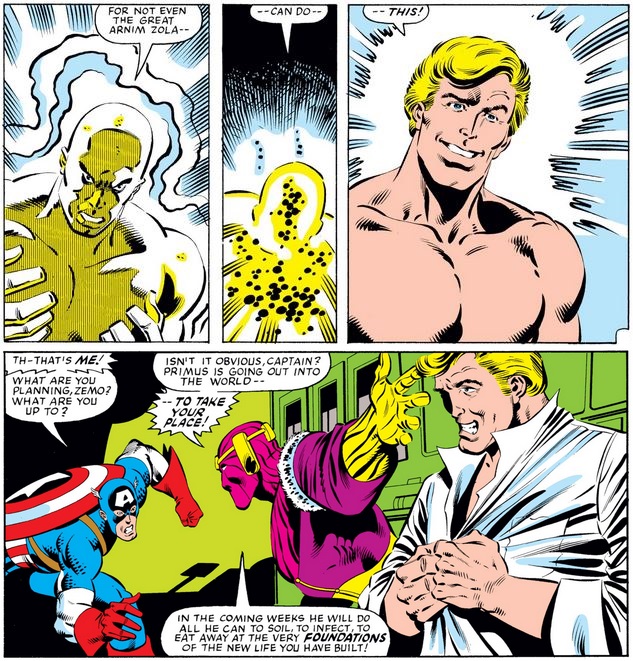 Zemo must have heard about when the Red Skull used the Cosmic Cube to impersonate Cap (in issue #115), but now that Cap actually has a private life worth ruining, the threat of impersonating Steve Rogers is much more serious.

Of course, Cap defends himself against Primus’s attacks… 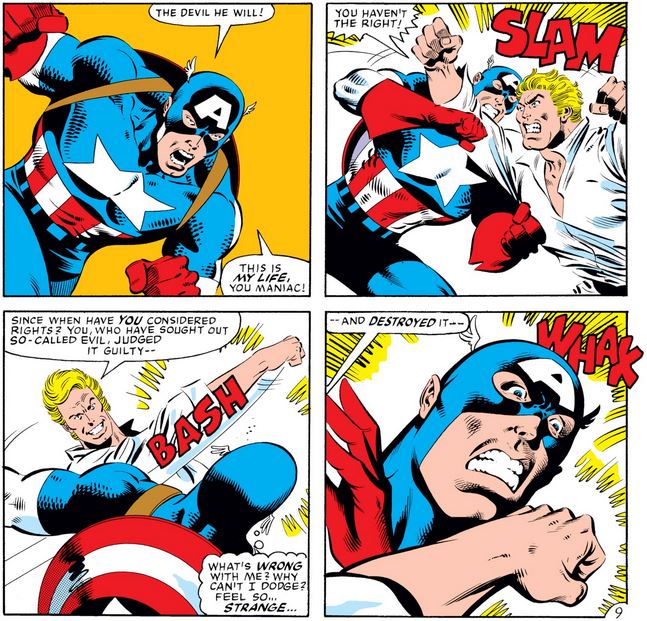 …as well as his unfounded accusations (disproven by the doubts he expressed earlier), until Cap finally succumbs, but obviously not due to a fair fight.

Once Cap is chained up (with his new sidekick Vermin), Zemo explains that while Primus sets out to ruin Steve Rogers’ life by impersonating him, he will be taking a more direct approach, courtesy of Arnie and Michael.

In issue #270, Michael’s mind was transferred into one of these creatures, but now Arnie has joined him. As Zemo points out, he has set up quite the moral dilemma for Cap, having to protect himself from Arnie and Michael while being careful not to hurt them…

…while figuring out how to restore his friends and keep Vermin from killing them.

Cap is momentarily overwhelmed, giving the creatures the chance to subdue him…

…before Vermin attacks that “vulnerable spot” on one of them, Michael, the shock of which frees Arnie.

After Arnie comes to, his initial impulse is to blame Cap, which is exactly what Zemo wanted. And back in Brooklyn, Primus meets Ms. Rosenthal, and expresses more unqualified enthusiasm for “their” relationship than the real Steve Rogers has ever managed to do. 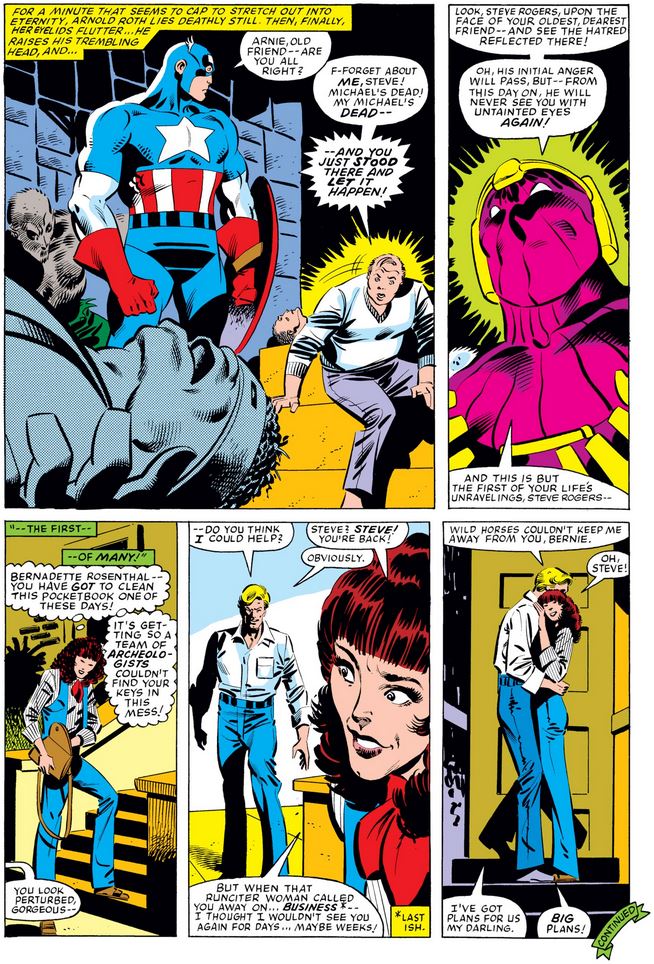 Here we switch stories and check in on Sam Wilson, who is undergoing a crisis of identity, fearing his former persona as criminal “Snap” Wilson has re-emerged.

(No, he hasn’t become the Iron Fist; that’s just an effect. The idea of Iron Falcon is very intriguing, though!)

Building on the last issue, Sam’s sister Sarah continues to fill in his girlfriend Leila Taylor and his campaign manager Carol Davis on Sam’s past, this time filling in new details (for the reader too) on her and Sam’s childhood, including the murder of their father…

…followed by their mother. 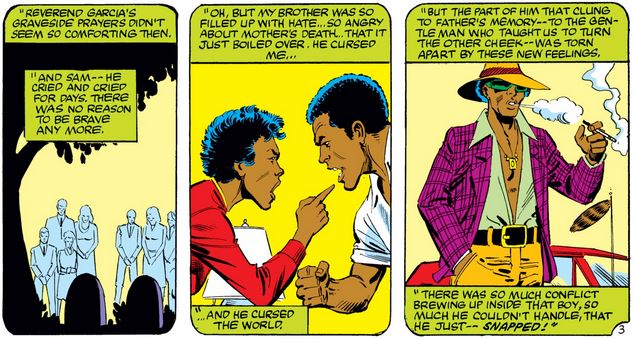 …yes, he “snapped,” suffering a mental breakdown that resulted in a new personality, that of “Snap” Wilson.

Stepping out of the story for a moment: This was J.M. DeMatteis’s way of resurrecting (or rescuing) Sam Wilson’s character, relegating the “Snap” personality to a psychotic break caused by horrific trauma, and revealing the original, “real” Sam to have been a kind and compassionate person all along.

This doesn’t help Sam, to whom his time as “Snap” is all too real, casting his recent actions and plans in a new, dimmer light.

As many have, Sam cries to the heavens, questioning the point of being good when all his best efforts seems futile…

…but when a man who might have the answers he seeks arrives, Sam rejects him—and his own name. 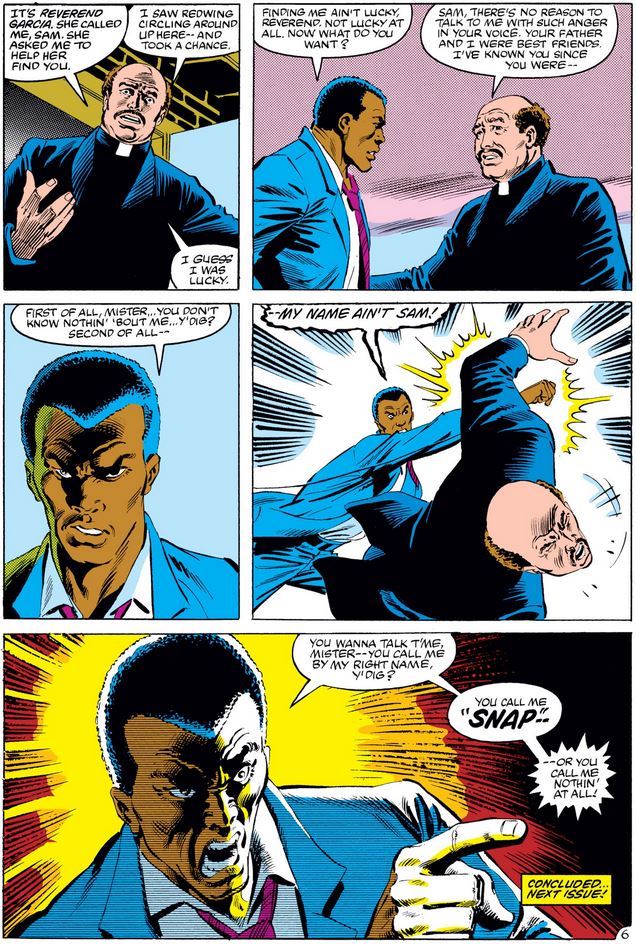 From now on, when Steve rushes off to save the day, Bernie understands why (as she did when S.H.I.E.L.D. picked him up moments after he confirmed he was Cap in the last issue of Captain America). 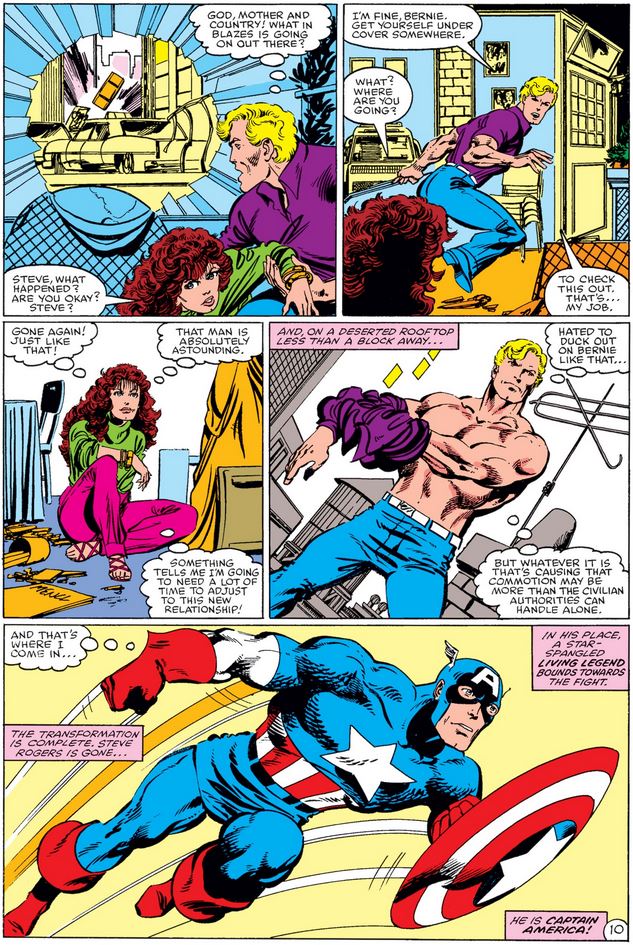 Eventually Cap finds Spider-Man fighting the X-Men, but they don’t seem themselves (and are rather insolent to the Sentinel of Liberty). 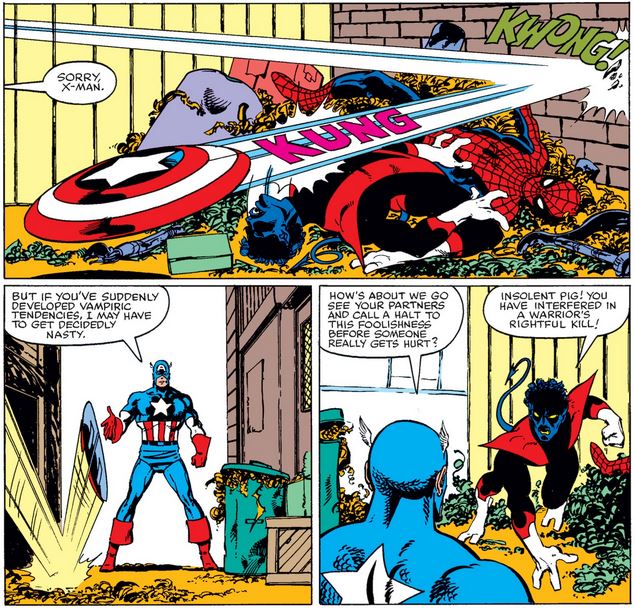 Cap easily deflects the assault from “Nightcrawler,” but not the one from “Colossus”…

…not completely, at least. Cap’s so surprised by this that he starts to figure out what’s going on…

…while Spidey has a good question about Cap’s shield.

I won’t spoil what the secret of the FauX-Men is, so we move toward the end of the tale—same comic, I promise—at which point the Shi’Ar Gladiator is fighting the Fantastic Four, and finding Reed Richards amazingly strong and apparently invulnerable.

Gee, it’s almost like that wasn’t Reed at all… 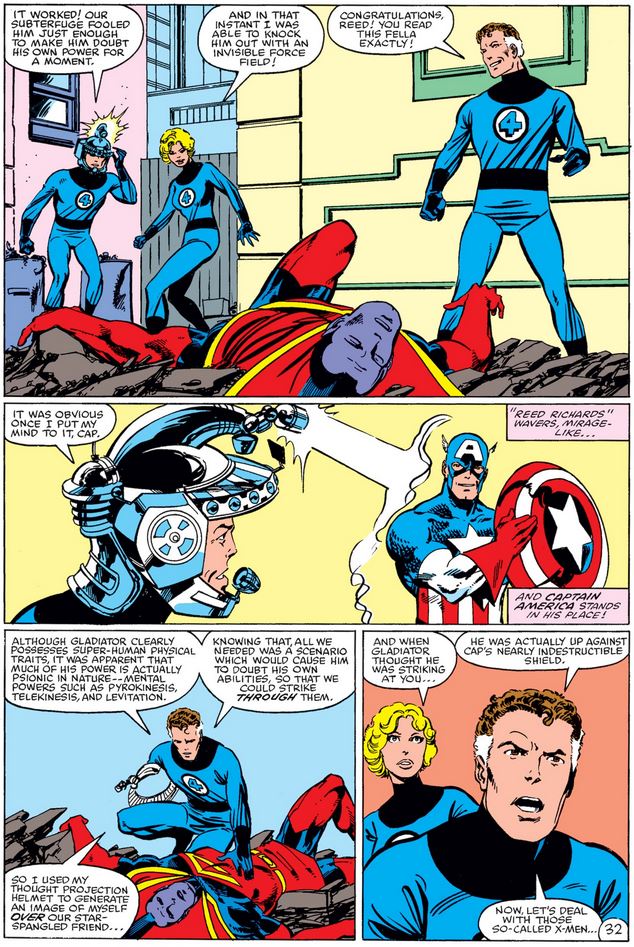 Very clever, Reed—but wouldn’t Sue’s force field have the same effect without having to involve Cap or use the thought projection helmet? (I know, Reed just wanted to play with his toys… and his friends.)