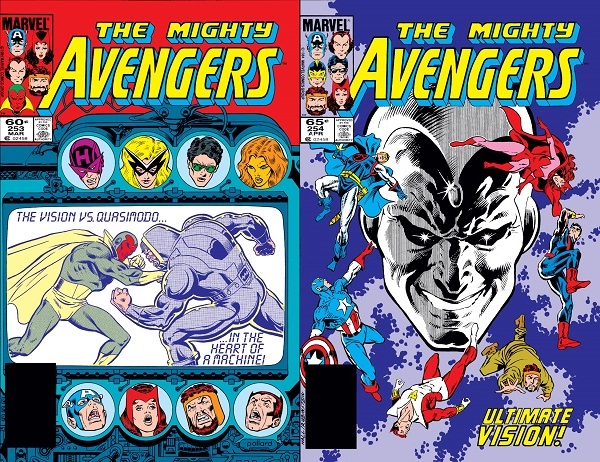 This post brings the long “Absolute Vision” storyline to its conclusion, as the synthezoid Avenger finally kicks his plan for world control into motion. (See the last post for a quick recap, because Captain America had not been in the book for a while before issue #251.)

In issue #253, we see Cap still addressing the U.S. Army personnel who, while guarding one of Thanos’s old installations in the Arizona desert, failed to keep a couple of Thanos’s goons, the Blood Brothers, from breaking in using a transporter the army accidentally activated (in the last issue). 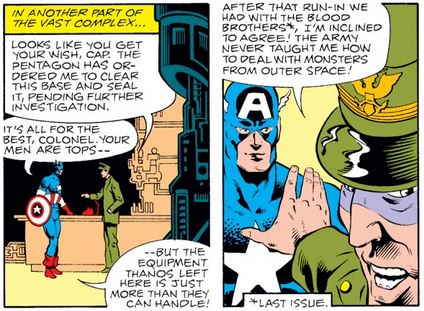 After he and the Scarlet Witch, Hercules, and Starfox take care of the Blood Brothers, Cap receives an Avengers distress signal, but it’s from a West Coast Avenger, and one that the Vision said was busy when he sent Cap and his team to Arizona.

I know… let’s ask him! At least the Vision finally lays everything out, although Cap withholds belief longer than Wanda does. 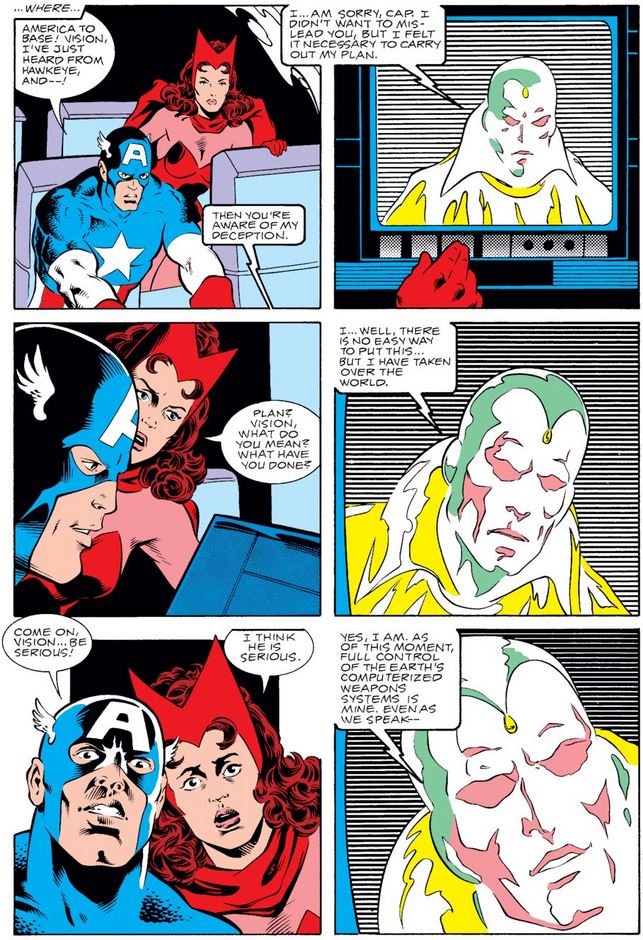 I appreciate that these last few issues have shown Cap and Wanda interacting as teammates and friends more often than we usually see, given that both of them share a long history with each other and with the Vision (albeit in very different ways).

The storyline comes to a head in issue #254, which opens with the Vision apparently having assembled his own Avengers as physical support. 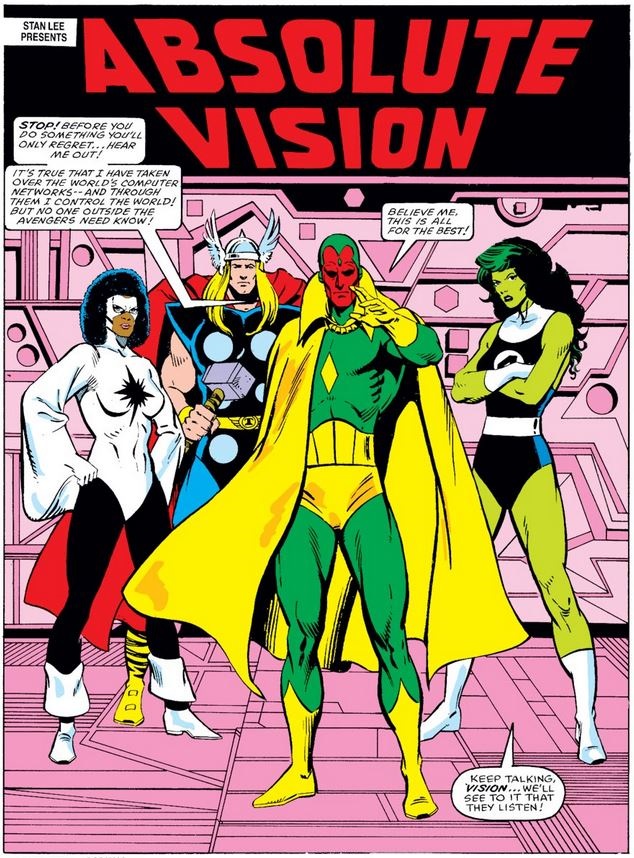 Cap is skeptical from the beginning, accusing the Vision of some sort of mind-control…

…before he notices another curious feature of these “friends” of his. (Can you see it?)

He chooses a particularly dramatic way to test his theory—and it pays off.

I never noticed before that Wanda casts a very familiar shadow herself!

Cap sends his fellow real Avengers in pairs to search the mansion for the actual Vision, staying with the Scarlet Witch himself so he can keep an eye on her (out of concern rather than protectiveness). 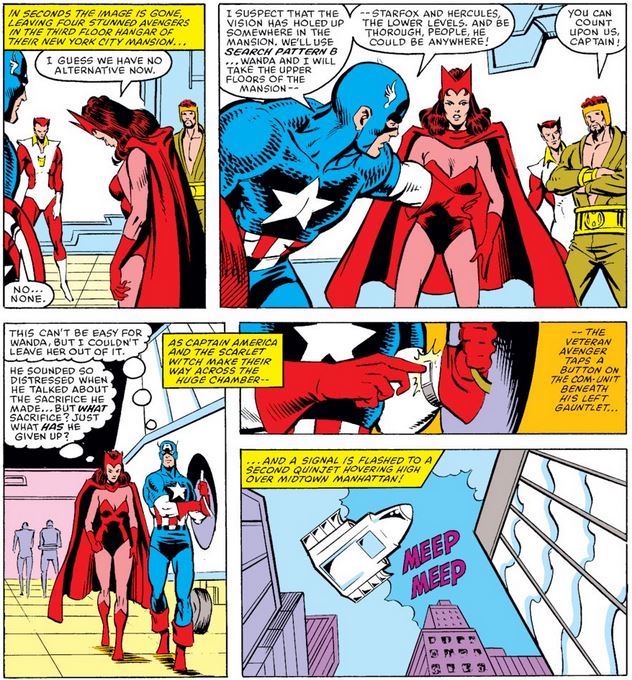 The signal is for the West Coast Avengers above, especially the Vision’s “brother” Wonder Man, who infiltrates the mansion from the East River. (Eww.)

Cap and Wanda split up to cover more ground, and Wanda considers that Cap is trying to protect her from finding her husband first… 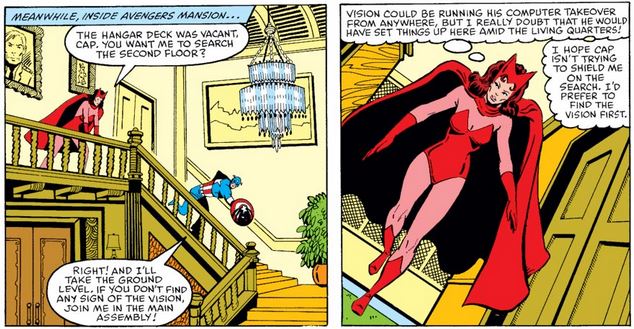 …but soon each Avenger meets a different holographic Vision. Cap meets one after facing the mansion’s defense systems…

…which the Vision tries to use as proof as he doesn’t want to hurt anybody. (There are easier ways to do that, buddy.)

Here, all the Visions tell the same story to their respective Avengers (including Wonder Man), explaining how he came to this point, eventually revealing that, as Cap suggested earlier, he does have limited mind-control powers, which he’s been using all along. 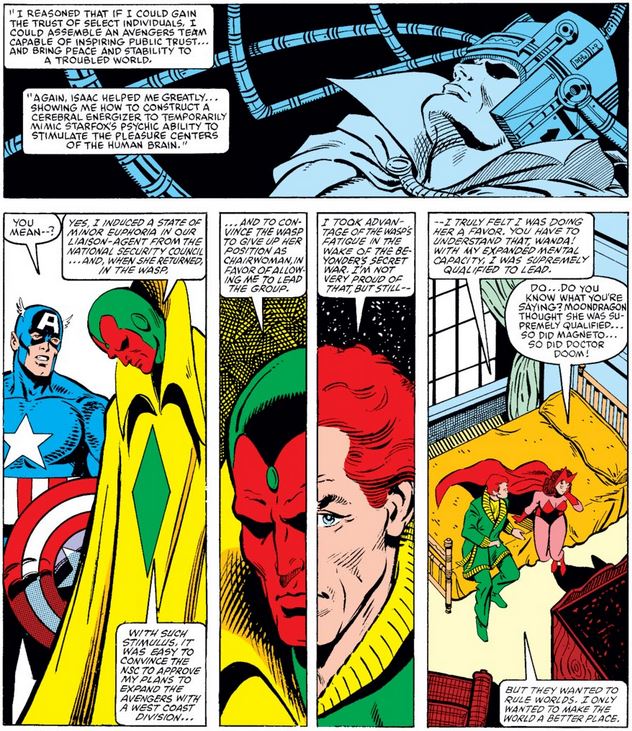 Yes, just like Magneto and Doctor Doom only say all the time. But you’re different, Vision, sure. <eye roll>

Vision tries to convince Cap, who trusts his friend’s heart is in the right place and poses practical objections regarding how much the Vision can actually control, rather than questioning whether he should even try. (I assume Cap knows Vision is resolute on this point, so he has chosen the more effective strategy of pointing out problems with implementation.)

Finally, Wonder Man finds the hard copy of the Vision, which lies dormant while his consciousness is in the global computer network, becoming increasingly aware of another fault in his plan, including the malfunctioning control crystal implanted by Ultron when he was created.

Directed by Starfox, the Scarlet Witch and the Black Knight destroy enough of the computer equipment to allow the Vision to disengage from it, after which he performs a little brain surgery (even though he forgot to say “it’s a beautiful day to save lives” first).

Sure, you’re good with your wife, but you still have to face Captain America. But knowing him, he’ll be firm but sympathetic, emphasizing the good intentions behind the Vision’s extreme behavior and the fact that he stopped and reversed course before it was too late.

Yes, you should all get some rest, because in the next issue you’ll have to face some government types that are none too happy about the Vision’s commandeering of their computer networks.