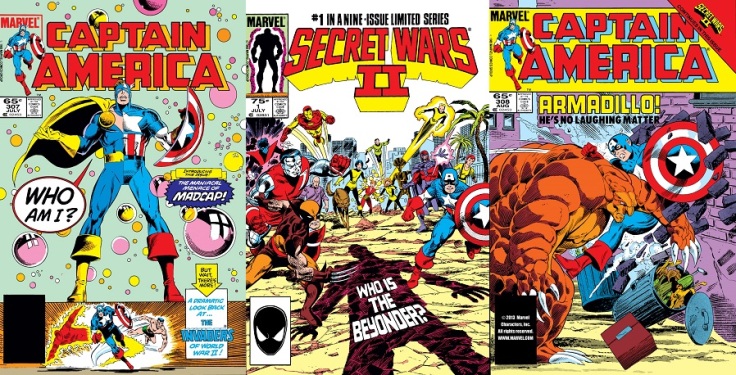 These two issues of Captain America launch Mark Gruenwald’s decade of writing the book, much of which sits among the very best Cap stories, but it gets off to a slow start: The first issue deals mainly with Cap’s crime-fighting partner Nomad, and the second had to tie in with Secret Wars II, the first issue of which fits in between the other issues covered here. 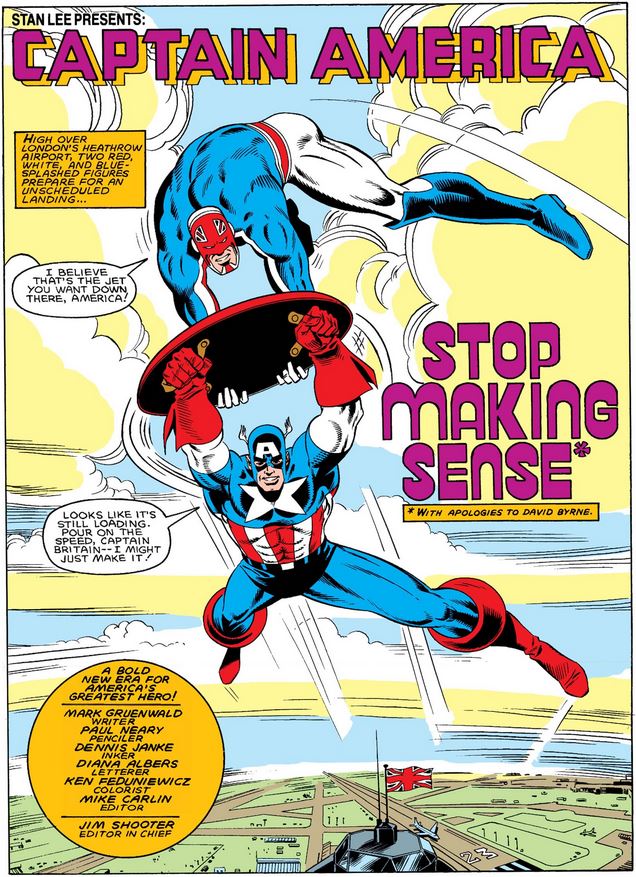 Being an Avenger definitely has its privileges, as we see below… he might even get extra peanuts. (And just in case you think he’s bumming a ride, you’ll see differently in Avengers #259.)

When Cap sits down and meets his new BFF, we get an insight into how he’s seen in the United Kingdom… 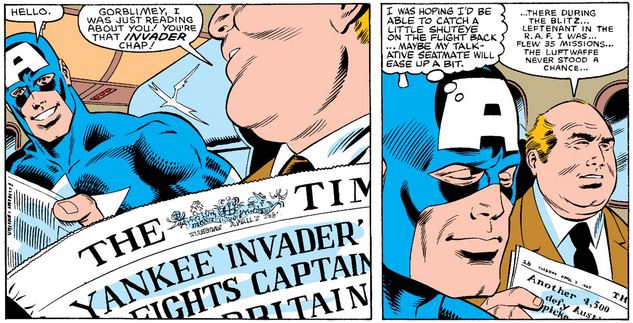 …which sends him reminiscing as he dozes off.

(You can revisit the entire first run of Invaders here.)

The rest of the issue deals with Nomad meeting a new foe named Madcap, but Cap’s flight continues in Secret Wars II #1, where our hero gets very little shut-eye once his fellow passengers finally realize that there’s an Avenger (or Invader, as it were) in seat 7B.

But Cap pays them no mind after he receives a psychic message, which rouses him to action, using his authoritative voice (and his Avengers priority card) to convince the flight crew to change course… and to try to calm the other passengers.

After clearing everything with the captain, the Captain thinks back to the first time he encountered the Beyonder, in the first Secret Wars series…

…and then berates himself for imagining the Beyonder wouldn’t come back. (After all, the first book sold very well.)

Unlike the first series, Secret Wars II sees the all-powerful Beyonder visit Earth to learn about humanity, which gives him a chance to encounter even more of the planet’s heroes (as well as appear in many other titles, natch). In the process, he powers up some ordinary humans, such as the yellow fellow below, who was a crusading Hollywood writer named Stewart Cadwall before being transformed into Thundersword. 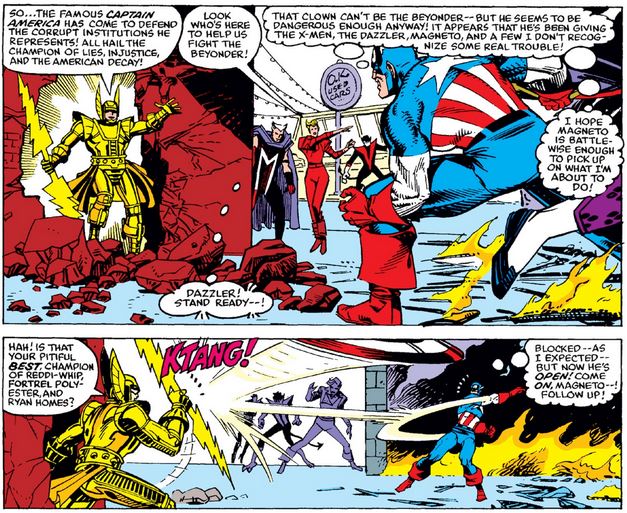 If only Cadwall knew that, in his private job as a freelance artist for an advertising agency, Cap also has issues with rampant consumerism (as we shall see again in Captain America #309). 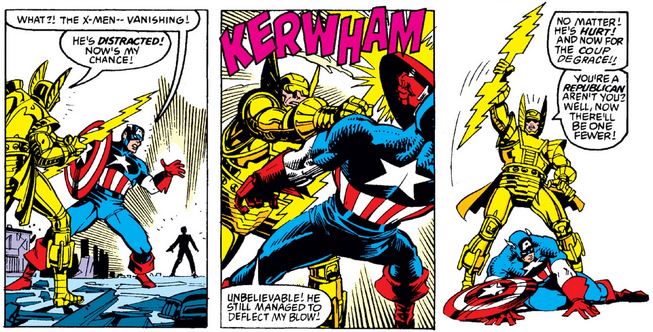 Officially he has no political affiliation, of course, but Cap is usually said to be an FDR-style Democrat, although his default support of authority (until it is abused) may obscure this for some.

The last scene from this comic serves as a great example of Cap’s avoidance of black-and-while political cliches. His recommendation for what to do with Thundersword, after the battle is over and he transforms back to Stewart Cadwall, is very balanced: He asks Iron Man (still James Rhodes at this point) to turn him over to the police but asks him to recommend psychiatric care rather than prosecution and imprisonment.

And follow him he does, straight into Captain America #308, where our hero is in infiltration mode (in the light of day, which should hint at the nature of his mission).

While he thwarts numerous security systems, Cap ponders recent events in an attempt to determine exactly what day of the week it is—something many of us know far too well in these isolated pandemic times.

(You saw the Beyonder in panel 4 above, right? This won’t be the last time, although he never interacts with Cap here.)

We get our clue as to where Cap is when arrows start flying at him, some with curious attachments…

…courtesy of a former teammate who can’t help pressing the “old man” button.

Uh oh… should Hawkeye (a.k.a. Mr. Mockingbird) be worried? I would think so!

In addition to securing transportation back east, Cap confirms what day it is, and reiterates the thought he had in Avengers #242 upon learning of Clint and Bobbie’s marriage.

But before he manages to get to the quinjet, Cap is set upon by someone else who apparently thwarted the West Coast Avengers security system… and Cap is none to happy about it. 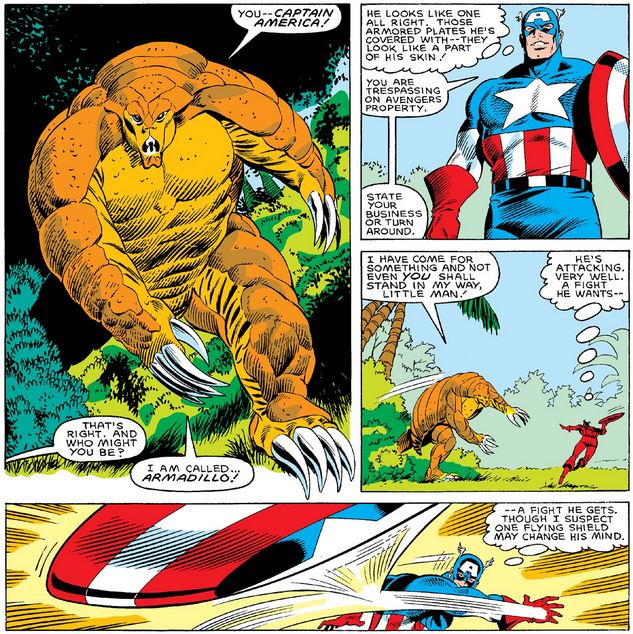 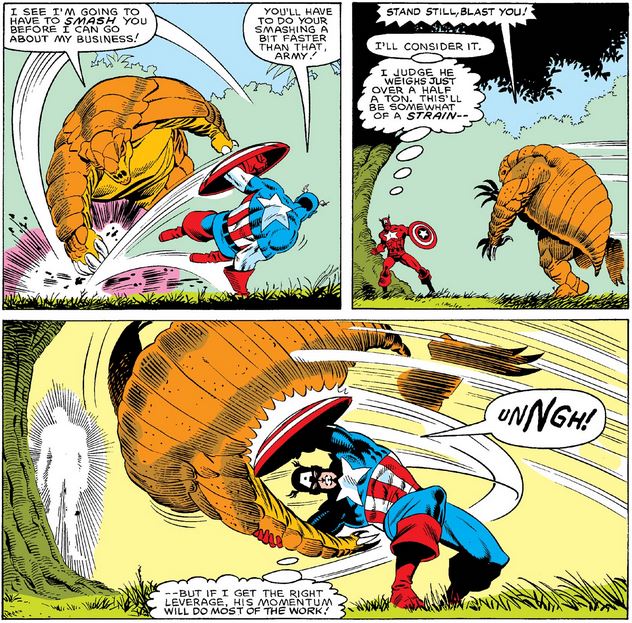 (And the Beyonder did see it all.)

After fighting some more, Cap tricks Armadillo—I’m not calling him “Army”—into a pit trap, at which point the captive intruder explains that he has to complete a mission for Dr. Karl Malus, the man who has promised to save his wife from a mysterious fatal illness and who also  transformed him into a human armadillo. (I wonder if insurance covered either.)

Cap believes Armadillo and, using his judgment (and generosity of spirit), decides to free and help him.

This Goliath is not Hank Pym or Bill Foster but Erik Josten, whom we first met as Power Man way back in Avengers #21 (long before Luke Cage took up the name), and was later given Pym particles by Dr. Malus. (In the future he will become Atlas, a key member of the Thunderbolts.)

Armadillo planned to use Pym particles to shrink Goliath and take him back to Malus, but they “evaporated” (huh?), so Cap tells him to ask for more and then come back and ask the West Coast Avengers nicely if he can have Goliath. (Don’t worry—he didn’t really mean it.)

So do I, but she has been around, back in New York interacting with Jack Monroe as he struggles in the job market. (We’ll see both in the post on the next issue.)

When Armadillo return to Dr. Malus, he is completely open about his experiences with Captain America; to me he sounds proud, like telling his dad that the cool kids let him play ball with them. And he seems just as honestly surprised that Malus turns on him and his wife when Cap threatens him. (Armadillo seems very childlike, which explains why Cap’s ploy above seems a little manipulative to me.) 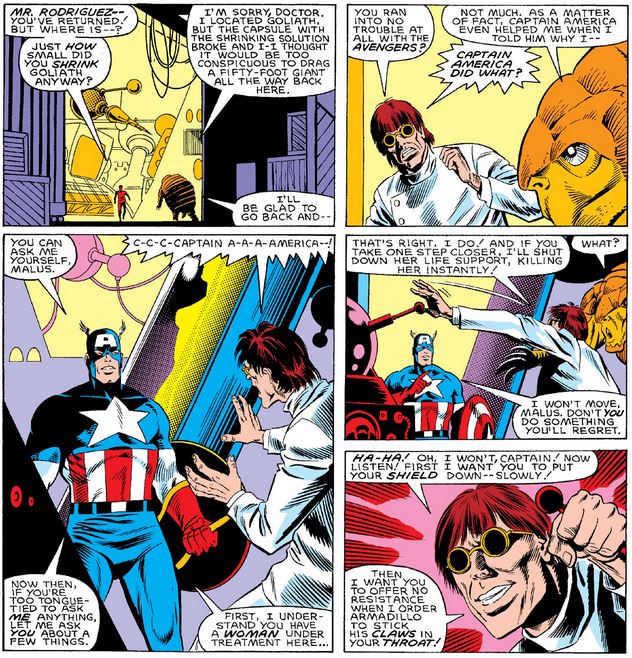 If you’re like me, you feel sorry for Armadillo, being forced to attack Cap again, but Cap remains understanding, with no plans to let him go through with it.

Cap is sympathetic even to Malus, and Malus seems insulted by it. (“Stop being so nice to me—I’m a really nasty supervillain!”)

Malus once again orders Armadillo to attack, and this time Cap counters by pointing out the danger to Armadillo’s wife if he does, appealing to the same concerns that compel him to fight Cap.

Similar to his compassion regarding Thundersword earlier, Cap takes a nuanced approach to Malus, leaving him with Armadillo and calling the police, and hoping they can work out a solution that helps Armadillo’s wife while serving justice. 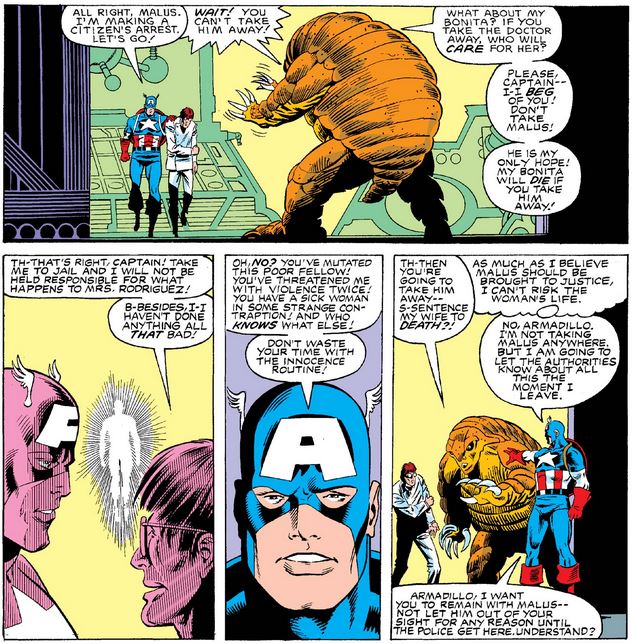 On his way to find a phone, Cap reflects on the tough situation he just had to maneuver, wishing it had been simpler—but having made the best decision he could, he can only hope it works out. (We will see Mark Gruenwald put Cap in a lot of these situations during his run, putting his principles and judgment to the test.)

Look, there’s the Beyonder again, and as he starts to analyze Cap he notes his exemplary physique, training, and mind, but still wonders why so many other heroes look up him, identifying only his “uniqueness and indomitable will to prevail.”

Without an appreciation of Captain America’s moral character, the Beyonder adapts our hero’s appearance, which misses the point altogether. (Does he even read this blog?)