This issue concludes Captain America’s “team-up” with Hawkeye, which started in the last issue, this time focusing on some of the Avenging Archer’s foes (although we see very little of them in this post). More important for Cap, we get resolution to his relationship with Bernie Rosenthal, which has been rocky for a while, and reached an inflection point last issue when Bernie told Steve she’s attending law school in Wisconsin. Also, we get a short tale from Marvel Fanfare the same month, written and drawn by a talent taken from us far too soon, that places Cap in the midst of a Caribbean terrorist plot.

After a few pages setting up Clint’s side of the story, we see Steve and Bernie watching as movers take her furniture away. When Bernie says it’s OK if he has something better to do, it’s because he usually does—which has become the primary issue between them the last few months.

Steve sees the writing on the wall, even if Bernie isn’t ready to acknowledge it, and he starts to tell her he is going to move out as well…

…when they’re interrupted by their neighbor and landlord Mrs. Kappelbaum, and before she can mourn the end of their relationship (and long before they do), Steve reveals he horribly misunderstands the commitment involved with living with a law student near a university. (An address near campus does not an “academic life” make.) 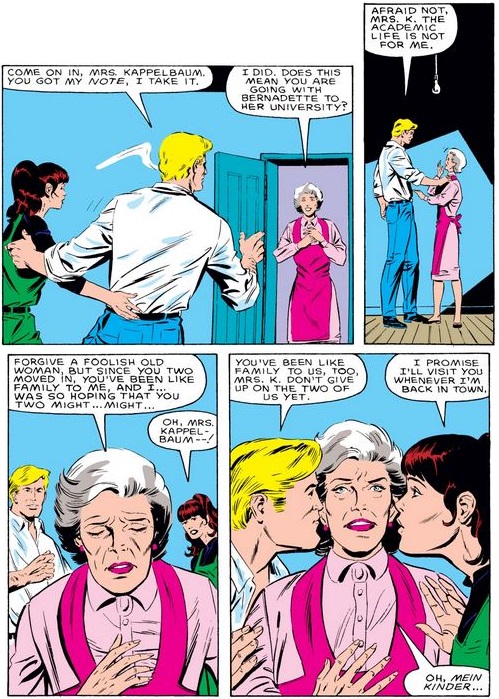 When Bernie’s dad shows up, we get several Yiddish lessons and the twin revelations that (1) the Rosenthals never really warmed to Steve and (2) that Bernie never told them about the engagement (thereby making it all that much easier to break).

But hey, at least there’ll be a party—and just look how thrilled Bernie is!

There are plenty of familiar faces at the party, including Sam Wilson, Bernie’s sister Jeannie, and Steve’s old advertising boss, Arthur Bennett.

Steve makes one last-ditch attempt to impress the Rosenthals by showing off his breakdancing moves, but only gets one leap in before he greets Clint and Bobbi (Hawkeye and Mockingbird).

Clint updates Steve on his enemy Crossfire, who was abducted by fellow costumed criminals before his trial (at which Hawkeye was due to testify), and when Steve gets a message on his hotline summoning Hawkeye to come “rescue” Crossfire, neither is fooled. Steve offers his help, which leads to a touching moment between the two longtime Avengers… as well as one more chance for Steve to blow off Bernie for superhero hijinks.

He seems fairly reconciled to the inevitable, judging from his comments below, and then considers if Bernie not being a costumed type could have been an issue as well. (Perhaps, but I always liked that she wasn’t; it helped keep him grounded in his civilian identity, which he had just started to embrace around the time he met her.)

The scene below explains the cover, although I think Clint overstates a bit: Has he ever actually seen Cap refuse to lend his shield to anyone? (Has anyone asked?) 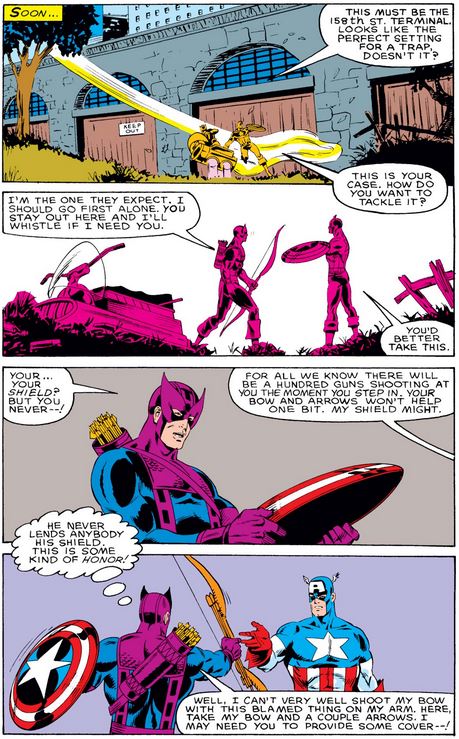 …although both heroes are more comfortable playing with their own toys.

When all is said and done, Cap celebrates their success before Clint discovers his value on the ransom market, and Cap remembers his previous engagement (in both sense of the word).

But the party is over… as is something else.

Bernie will make occasional appearances in this title for many years to come, but as of the time of writing, we have not seen her involved with Steve again. (But there’s still time, Sternie fans!) She does, however, become a lawyer, and comes full circle when she represents a Captain America at trial.

In Marvel Fanfare #26, we have an interesting tale by Will Jungkuntz, who died tragically from a heart virus at the age of 30, before his Cap story saw print. Cap is peripheral to the plot, which deals more the mysterious Deathmask who terrorized the Caribbean nation of St. Cyril and stalked the daughter of the governor, later tracking her to Brooklyn at the West Indies parade, where her boyfriend now snaps a picture of our hero.

After the boyfriend, Noel, tells Cap the story of Deathmask, the villain himself shows up at the parade with several fellow criminals from St. Cyril, who fortunately are not too competent. Nonetheless, Cap has to devote himself to the safety of the crowd…

…before leaping to safety himself and then focusing on rescuing Eurydice, Noel’s girlfriend and Deathmask’s “queen,” dressed as the Statue of Liberty for the parade. 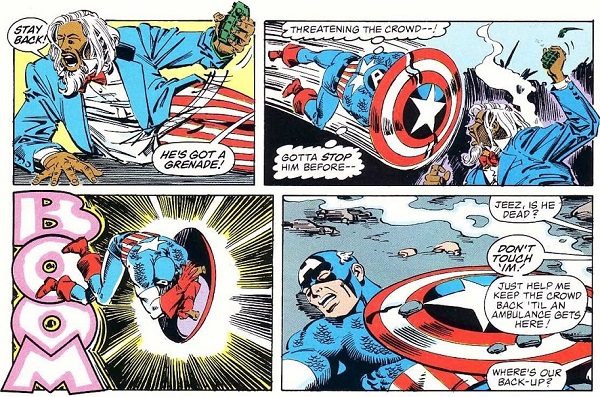 …but reappears atop Grand Army Plaza to save Eurydice and then face Deathmask and his partner Cecil.

Forced to choose between tossing his shield at Deathmask or Cecil, he chooses the greater threat, thereby leaving himself open to attack (further enabled by the aftermath of the grenade explosion).

Thanks to Noel’s sudden appearance, Deathmask is distracted enough for Cap to get the upper hand… 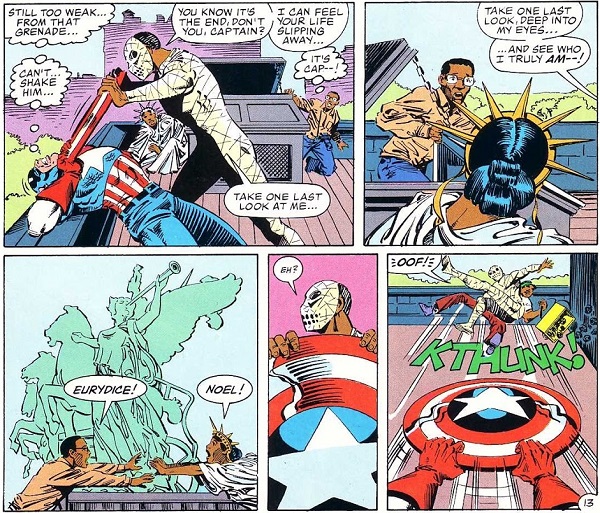 …leaving Cap to handle another grenade, this time shielding Eurydice and Noel from the blast, which blows back on Deathmask and Cecil.

The crisis averted, Cap gets his thanks and is heralded by the rest of the crowd… 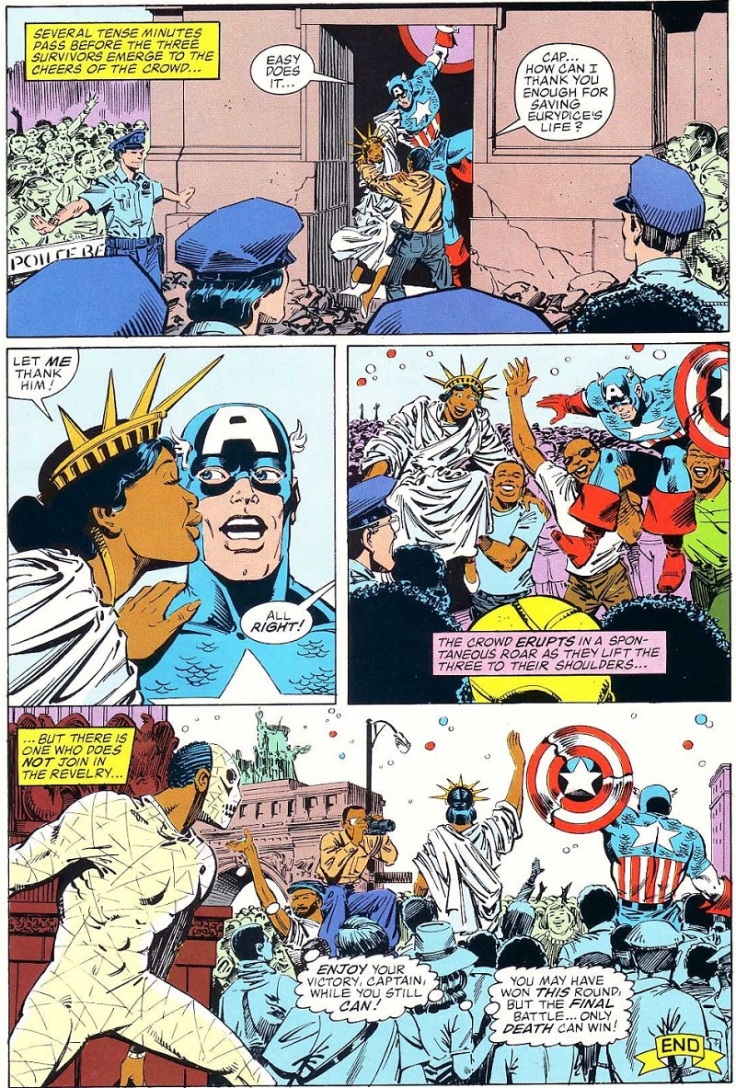 …while Deathmask plots his revenge (which has yet to come).