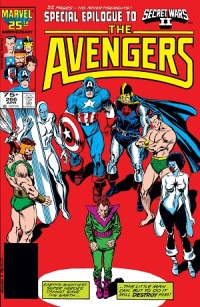 This epilogue to Secret Wars II focuses on the Molecule Man, not the Beyonder, and guest-stars the Silver Surfer (as seen on the cover) and the Fantastic Four (who didn’t make the cut, apparently, or else Reed forgot when the photo shoot was). With this issue we finally say goodbye to this sad sequel to the original line-wide crossover event (while looking ahead nearly 30 years to the third installment, which will feature Captain America even less than the first two). As a bonus, in this month’s Vision and the Scarlet Witch, we get a short continuation of the conversation in the last post between Cap, Namor, and Vision about the original Human Torch.

In Avengers #266, it seems the trouble wasn’t over when, at the end of Secret Wars II #9, the Molecule Man “killed” the Beyonder (actually sending his life essence back to his original dimension): The damage done to the planet while he was here turned out to be catastrophic, so much so that “even Captain America was caught off guard,” despite his legendary seismological training and background.

…before he has to report to the man. The news is not great, but Cap remains optimistic.

Hey, if Zack Snyder can tell his Justice League story in four hours, anything is possible!

It’s half of a Defenders reunion as the Silver Surfer joins our merry troupe, escorted by Captain Marvel, who is a bit too honest about the current predicament for Cap.

And Namor’s not helping! But the Surfer does give an idea to the one hero who hasn’t given up yet.

After the team debates the ethics of asking a “bad guy” for help, even if he’s the only one who can possibly save the entire planet, they summon Owen Reece (the Molecule Man) and his girlfriend Volcania. Cap tries very hard to be diplomatic while Reed is brutally honest and Johnny is… well, Johnny.

When the Surfer finally get a chance to ask the Molecule Man to fix the planet, he reveals he’s already doing the best he can, although his efforts only delay the inevitable.

Given this, Cap is forced to ask Owen to risk his life to save the world and himself, but the last part is not an effective argument, given Owen’s escape plan.

The rest of the heroes try to remind the Molecule Man of everything he’d miss on Earth if it were destroyed, but he’s more focused on the costs to him and Marsha of failure… and even success. 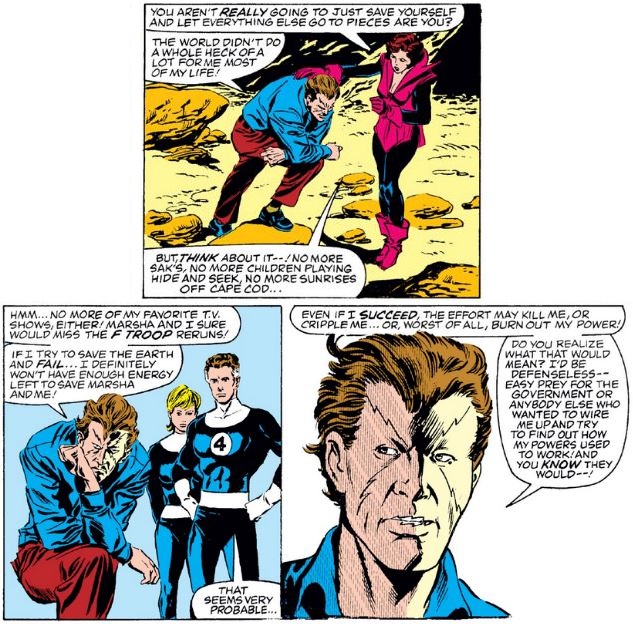 Of course, Cap assures him that the government would never, ever do anything like that, despite his own experiences with government corruption and overreach, and the fact that Owen Reece represents a existential threat to the entire world, if not reality as we know it. (Maybe he’d feel differently after Captain America #332, coming very soon.)

Eventually the Molecule Man agrees to help, and with the Silver Surfer’s assistance, he expends all of his power to save the planet. In the end, Cap gives his thanks to plain normal human Owen Reece, no threat to anybody at all…

Planetary apocalypse having been prevented for the time being, we’ll turn to Vision and the Scarlet Witch #7, where our favorite synthezoid interrupts Cap and Namor during their training session in Avengers Mansion. 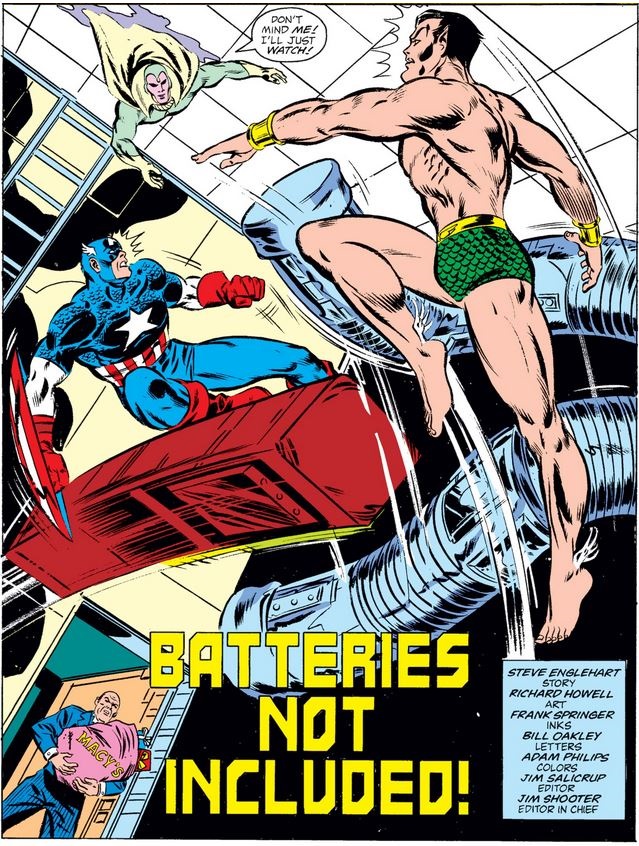 …before he lets himself get distracted.

Nonetheless, he seems to-the-point, even blunt, with Namor at the end, and he doesn’t seem to take it too badly. (Maybe give him more credit next time, Cap?)

Or just let Vision deliver the criticism for you before asking about the previous occupant of his body.

See the previous post for more background on the strange links between Vision and the Human Torch, while we settle in with some milk…

…and get ready to hear some stories from the old days, and Cap ponders the Vision’s physical nature before declaring the Human Torch’s speech patterns completely “normal.”

Cap also praises the Torch’s character before revealing his preferred names for their World War II-era group. (I think “Guardians” is much better than his suggestions while in the same spirit. But no one asked me.) 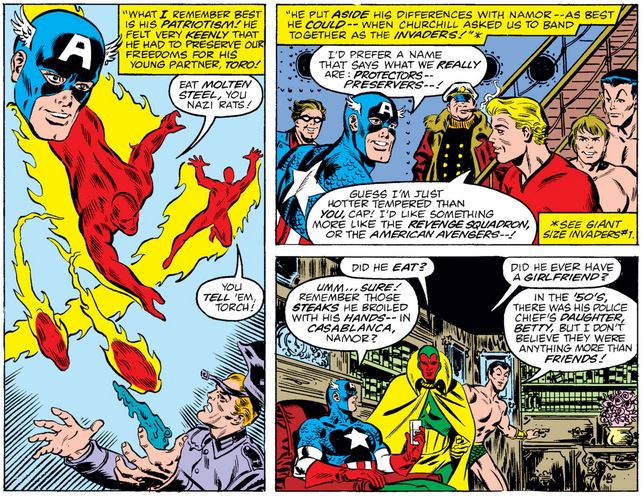 Finally, Cap asks Vision why he wants to know so much about the Human Torch, and it seems they were both thinking along the same lines.

This whole line of questioning evokes classic philosophical work in personal identity by Derek Parfit and others, as did the Ship of Theseus scene in the final episode of WandaVision, as well as the mind-body problem and the nature of consciousness—all of them a bit outside the purview of this blog, but fascinating nonetheless.