Out of the four issues covered in this post, Avengers has the most content relevant to this blog, as Captain America and his teammates face off with the Beyonder. This is followed by the conclusion of Secret Wars II, in which Cap and dozens of other Marvel heroes join forces to see Mr. Jumpsuit off once and for all. Finally, we quickly cover two lesser appearances alongside fellow Avengers, one of them quite relevant to a recently concluded and very popular Disney+ series. (No, not the Baby Yoda one… who said that? Quiet, you.)

We first see our hero in Avengers #265 when the Black Knight recaps the final page of Secret Wars II #8 for Mr. Brannum…

…before we find out where Cap ended up, just hanging out.

The Beyonder reminds Cap of how he copied his physical form in Captain America #308 while he fiddles with the shield, apparently unimpressed with its miraculous properties. 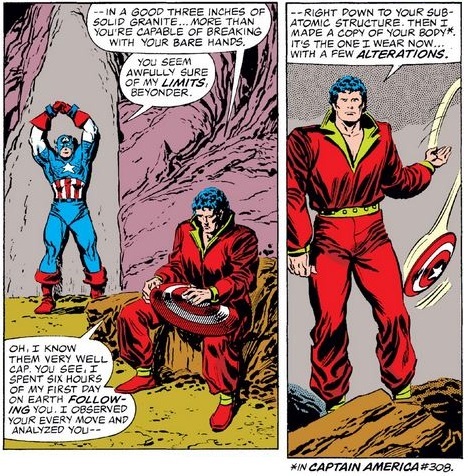 When Cap tries to tease out why the all-powerful being has been using his omnipotence to destroy rather than build, Hasselhoff reveals that he was just fine before coming to this rotten place, and now he’s just had it.

That may seem like a bit of an overreaction, but if your Baywatch residuals ran out, I doubt you’d be at your most rational either.

Once Cap sees a chance to slip his bindings, he spares no effort (while losing a little flesh)…

…and then considers how to take advantage of the situation, remembering all too well the lessons learned in the first Secret Wars series.

I don’t know if Cap’s sleep science holds up—and even if it did, how does he know he wouldn’t knock the Beyonder into a dream state—but the question is moot because the Beyonder was just pretending, ha! But he does give Cap his due… 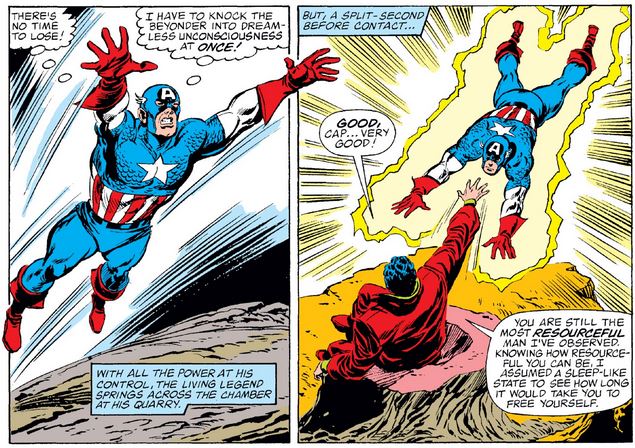 …and only continues his admiration below, before accusing Cap on using his abilities for violence, paralleling Cap’s critiques above and justifying his own actions.

“This” is Namor, who leads the rest of the Avengers in a sneak assault on Beyonder Mountain (coming to Disneyworld this summer!), but it doesn’t fool the boss, who mocks them for doing all this to save the person he himself just called the best of humanity.

Hercules definitely hits a nerve, and causes the Beyonder to reveal his true form: the sun from Teletubbies.

From his ravings below, I think the Beyonder could have saved everyone a little trouble and just read some existentialism, especially regarding the absurdity of life and the need to create meaning for oneself.

Great, as if Cap doesn’t take on too much responsibility as it is! But before he has a chance, his teammates engage physically with the Beyonder a little more. Enough though the being uses Captain Marvel in her energy form against the rest of them, Hercules refuses to die…

…displaying the very defiance the Beyonder detests (but doesn’t seem to understand). After all, what is defiance, if not power persevering?

Cap finally gets his chance to talk the big guy down, maybe introduce him to stories of the Buddha… but not enough of a chance, as it turns out. 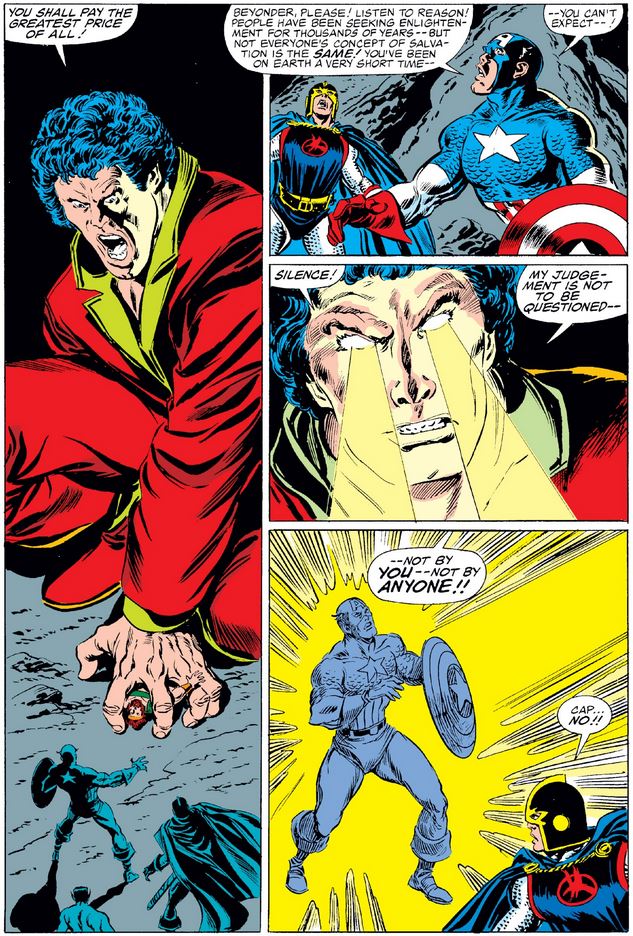 For someone whose “power is supreme” and whose “will shall be done,” his blast against Cap seems to have done nothing but knock him out, which we don’t learn until the bottom of the final page of the issue. After the rest of the Avengers resist and ultimately fall, eliciting a fleeting moment of admiration from the Beyonder, he just says $%^& it, let’s wipe out reality after all. 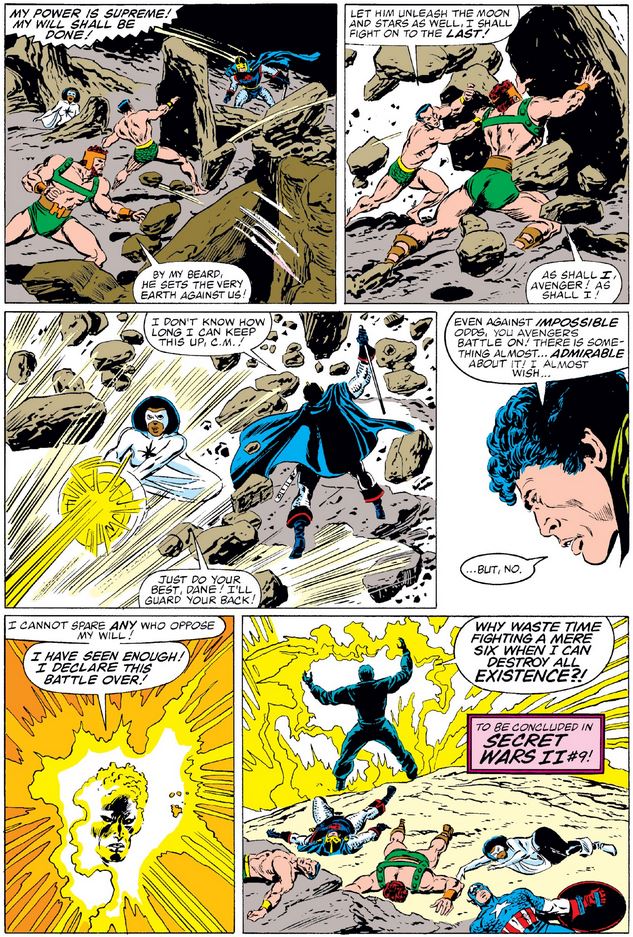 As it happens, we cover Secret Wars II #9 next, and while there are some interesting epiphanies on the part of the Beyonder in the issue, they come with no help from Cap, who plays a very small part in the proceedings. For instance, he offers a temporary truce with the X-Men, who are still on the outs with the rest of the superhero community for playing with Magneto during recess (as we saw in Fantastic Four #286).

When Beyonder sends the mind-controlled New Mutants against our assembled heroes, Cap is careful to subdue them without hurting them, despite their loose affiliation with the X-Men, based on his respect and concern for humans and mutants alike.

Meanwhile, the Beyonder has been quite busy himself, making himself mortal and then a god again, until he tries to achieve humanity and omnipotence at the same time, starting as an infant in a gestation tank, which raises the classic “baby Hitler” conundrum. On this issue, it may seem that Cap is surprisingly uncommitted, until you realize the monumentally enormous stakes involved, which could threaten even the strongest principled stand. (This is consistent with threshold deontology, discussed in chapter 5 of my book and in more detail in this article by legal philosopher Larry Alexander.)

“Owie” is Owen Reece, aka the Molecule Man, who’s enjoyed a peculiar on-and-off relationship with the Beyonder in this series (and its predecessor), and now finds himself burdened with ending his threat once and for all. After he kills the Beyonder, Cap sympathizes, acknowledging both the tremendous good Reece did but also regretting how it had to be done (which is consistent with making choices in tragic dilemmas with no clearly good options). 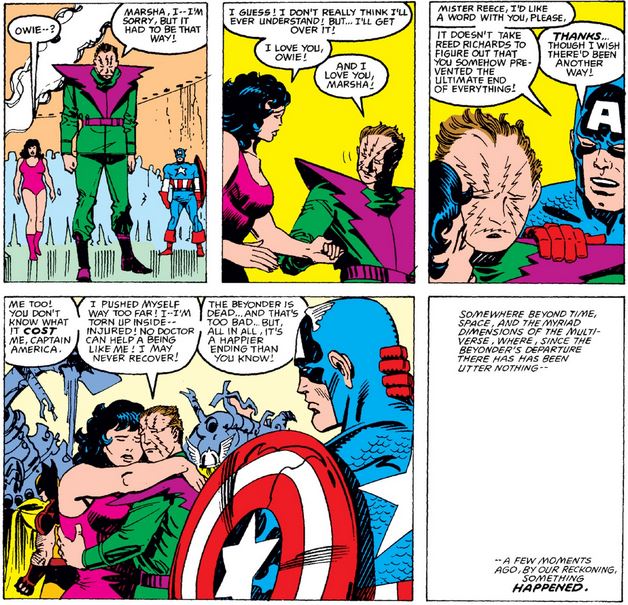 That “something” was the Beyonder’s life force returning to his home universe, in which it takes the form of a Big Bang, introducing life into the void and giving the Beyonder the meaning and purpose he had been seeking.

The last two issues in this post are a bit lighter in tone! First, in Vision and the Scarlet Witch #6, the title characters host a dinner party for their friends…

…and Cap admits cheerily that, unlike his fellow Avengers, he has no life.

Vision mentions the child he and Wanda are expecting—they will not learn they’re actually having twins until the birth in issue #12—as well as his “brother,” Simon Williams aka Wonder Man, with whom he shares brain patterns, which leads Cap to make a completely out-of-the-blue connection (complete with a gesture that Thanos will later adopt as his trademark move, because Cap just made it look so darned cool).

At the time, Vision was believed to be made from the original synthezoid man, Jim Hammond, aka the original Human Torch. (It’s complicated.) In the original Marvel Handbook, Hammond did not even have his own entry, despite being one of the first Timely superheroes, starring alongside Namor in Marvel Comics #1, but was relegated to Vision’s entry… even though, as we see below, Vision is quite aware that he and Hammond are not the same person. 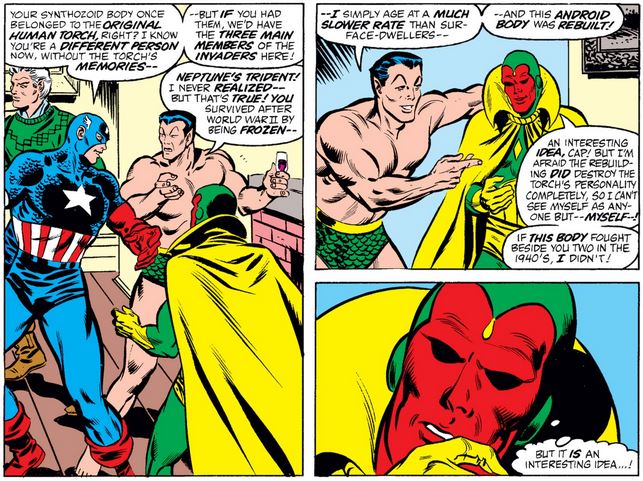 Don’t worry, Cap—I know how hard it is to come up with conversation topics at a dinner party. (And yes, I’ve tried to snap it away too. Doesn’t work.)

Finally, speaking of Wonder Man, in his self-titled one-shot he is called by his former team…

…to use his unique energy-based form to save the Sandman and millions of other lives, as Cap explains. 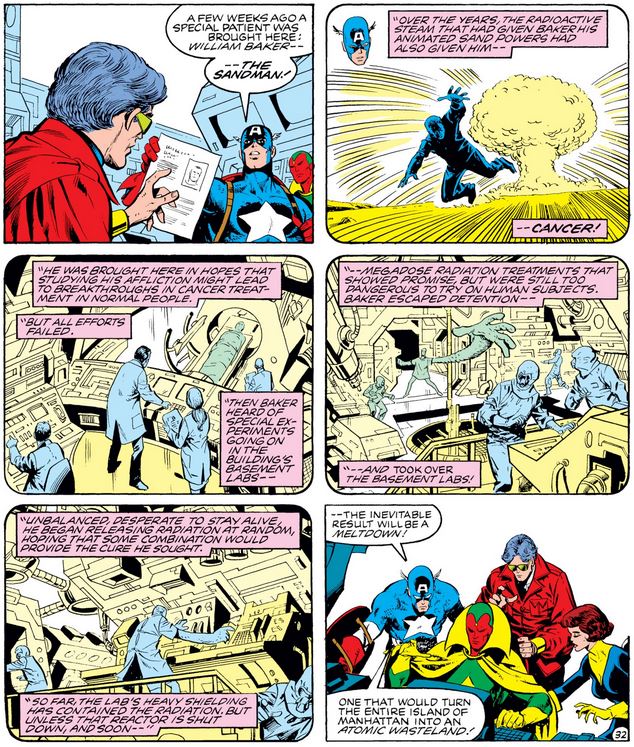 Of course, Simon agrees to go (even though Cap shows his undying faith in his former teammate by putting on hazmat gear “just in case”), while reflecting on the fears and doubts that have been a part of the character almost since he was introduced (and apparently died) in Avengers #9.

Simon succeeds, and is awarded with praise from Cap and the Wasp, before he learns that the Sandman has been saved (along with the island Manhattan, no big deal) but the cure for cancer has been lost, which he interprets in terms of his own anxieties.

Collected in: Avengers West Coast Epic Collection: How the West Was Won