This time around we cover all three of a month’s appearances of Captain America in one post: Most of Cap’s action in February 1986 occurs in his own title, where he struggles with issues of duty and extradimensional jurisdiction, while he features in just one page of each of this month’s Avengers and Secret Wars II, both previewing upcoming stories (oddly, in Captain America and Avengers, respectively). Before we get started, though, check out the cover, an homage to the many “giant typewriter” covers and panels in Golden Age Batman stories, which is appropriate given this month’s special guest.

In Captain America #314, our hero is practicing his patented brand of relaxation when a visitor from a strange dimension FOOSHes in beneath him.

I’ll bet you do, stranger!

Cap seems to recognize him, but since he’s yet to meet Batman… 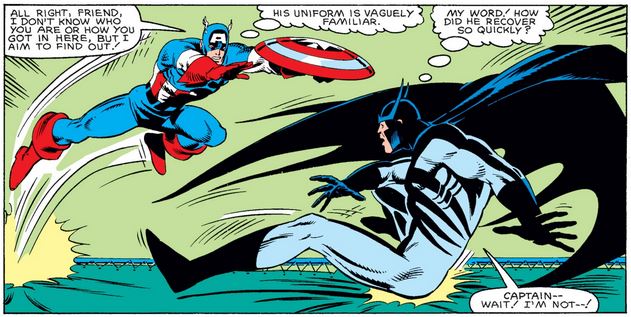 Nighthawk explains to Cap how the rest of the Squadron Supreme, after falling under the mental sway of Overmind (subtle), all but destroyed their Earth, and after breaking free from Overmind’s control and rebuilding their world, they made plans to rule it as dictators. At this point, Nighthawk quit the team, and came to Earth-616 looking for a good man… and he knows just the right words to use to convince one.

Cap calls a meeting of the Avengers, which Reed Richards crashes (with Sue there to keep him in line), and explains the situation. At least one of the team has issues…

…ones that echo a similar discussion before a recent Avengers adventure. Perhaps surprisingly, Cap agrees that it is not their place to interfere with political conflicts in other dimensions, even if they’re threatened by the forces of tyranny. (If this seems a bit pat, smacking of “let’s keep our hands clean,” just wait.)

But of course, let’s ask the expert in history and political science… or Reed.

The Wasp makes the official pronouncement—as does Reed, although nobody asked—and Cap feels duty-bound to break the news to Nighthawk himself. 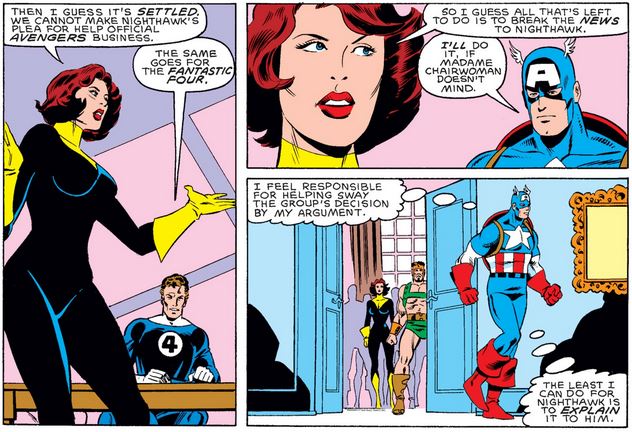 Nighthawk might want to reconsider that second cup of tea, because he does not take Cap’s news lightly. (Frankly, it’s refreshing that we didn’t hear the usual “I understand, Cap—thank you for considering it.”) 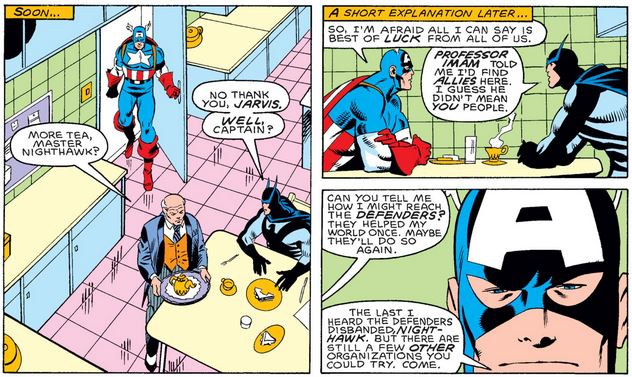 While Nighthawk uses the Avengers computer to look for help, Cap checks in with his hotline, learning about a situation in progress featuring villains who turn to be familiar to Nighthawk. Cap and his temporary partner arrive on the scene to find the villains gone; Nighthawk pursues them while Cap leaves for some private business, but he can’t stop thinking that the threat of tyranny might be important than respecting the sovereignty of other worlds.

That private business is his new job as the penciller of the Captain America comic at the 616 version of Marvel Comics, where he continues to dazzle his editor with his understanding of the mechanics of superhero battles. He also has issues with the simplistic way he—or, rather, “Captain America”—is portrayed by the book’s writer.

Although it happens off-panel, Steve does talk to the writer, but all we learn is that the conversation made up his mind about the situation on Earth-712. (That must have been some conversation—too bad we didn’t, you know, see it.)

Before he can move on it, though, his fiancée has wonderful news of her own… 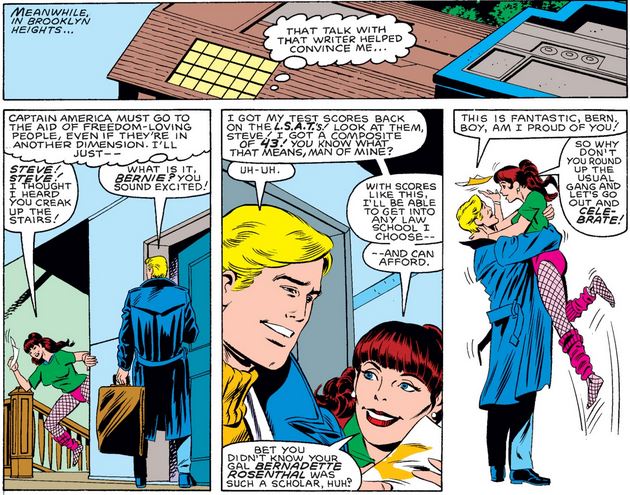 …but do you think Steve has time to celebrate? There’s a whole other Earth out there to save!

Well that doesn’t bode well. (Maybe he shouldn’t have hushed her with his finger. Or blown her off with a big ol’ “see you!” Or called her “kid.” Or… well, you get the idea.)

…and exercises a little “discretion” in apprehension, perhaps out of sympathy for what’s happening on their own Earth. (And you have to love the casual shield toss into “Pinball,” admittedly an easy target.)

When Mink—a pastiche of Catwoman, or perhaps the Earth-712 version of Felicia Hardy, aka the Black Cat, which amounts to the same thing—jumps off the typewriter, she shows that it doesn’t take long for anyone to pick up on what kind of person Captain America is.

After the three villains are in custody, they reveal that they fled to Earth-616 to escape their own Earth and the cruel fate that awaited them there. Cap is sympathetic, as expected…

…but gets caught up with the trio’s legal status, and arrives at a particularly harsh conclusion. (Why would refugees from another Earth be treated any differently here than refugees from another country, who would at least be considered persons, if not necessarily treated as such? Is there Marvel Universe precedent for this?)

At the end, all the trouble Nighthawk’s request caused Cap and his relationship, he changes his mind and skips town with the rest of his own Kooky Quartet.

After they leave, Cap reaffirms the conclusion he came to with the mystery Marvel writer.

Yeah, I’m sure that will make Bernie feel better.

Meanwhile, Cap’s singular appearance in Avengers #264—a “day in the life” issue that centers on the Wasp’s expanding powers and the emergence of a new, criminal Yellowjacket—only sets up his adventure in next month’s issue of his own title.

As we will see in Captain America #315, to answer this call from an old enemy, he skipped out on Bernie yet again. (I wish I could say that’s the “bizarre” part, but sadly it’s all too normal.)

Finally, Cap’s only appearance in Secret Wars II #8 is on the final page, alongside his fellow Avengers, setting up the tie-in in next month’s Avengers #265 by being the only Avenger who can evade the Beyonder’s “energy tornado”—that has to have been a disco song—and drawing the ire of the all-powerful being in doing so.