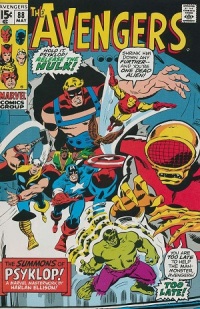 This post covers a smattering of comics containing all of Captain America’s appearances with the Avengers in 1971. Most feature Cap in only several panels, with only Avengers #88 among them counting him as a main character. (The Falcon appears in two of them also, even though he would not be made a full members for several years yet.) In the spirit of this blog, however, we see that even those comics in which he makes a cameo appearance reflects something about his moral character (however slight a mention may be).

First, we see Cap’s charitable side in Avengers #85, in which he headlines a Toys for Tots event, apparently corralling several fellow Avengers and a friendly neighborhood Spider-Man into appearing (as well as showing that he has faith in his friends).

Next (chronologically speaking), in Sub-Mariner #35, we intrude on an Avengers meeting, in which Clint is up to his old tricks of questioning Cap’s authority.

And later, as he, Thor, and Iron Man rush to investigate an incident with the Hulk, Namor, and the Silver Surfer—the “Titans Three,” who would later become the core of the Defenders—the Avengers Three reflect on when the Hulk was an Avenger, with a kind word for his “replacement.”

I assume that’s Thor speaking… it doesn’t sound like Tony, and I really doubt it’s Clint!

Next, in Avengers #88—the first of a two-part story plotted by Harlan Ellison that continued in The Incredible Hulk #140 (without Cap or the Avengers)—we find the Avengers, with the Falcon joining them (unofficially, at this point), rushing to a crisis. Cap reflects on how they arrived there, thinking back to when he and Sam were looking into the disappearance of a friend and stumbled on… voodoo! (Note Cap’s generosity, especially when it comes to borrowing Avengers property for personal business.) 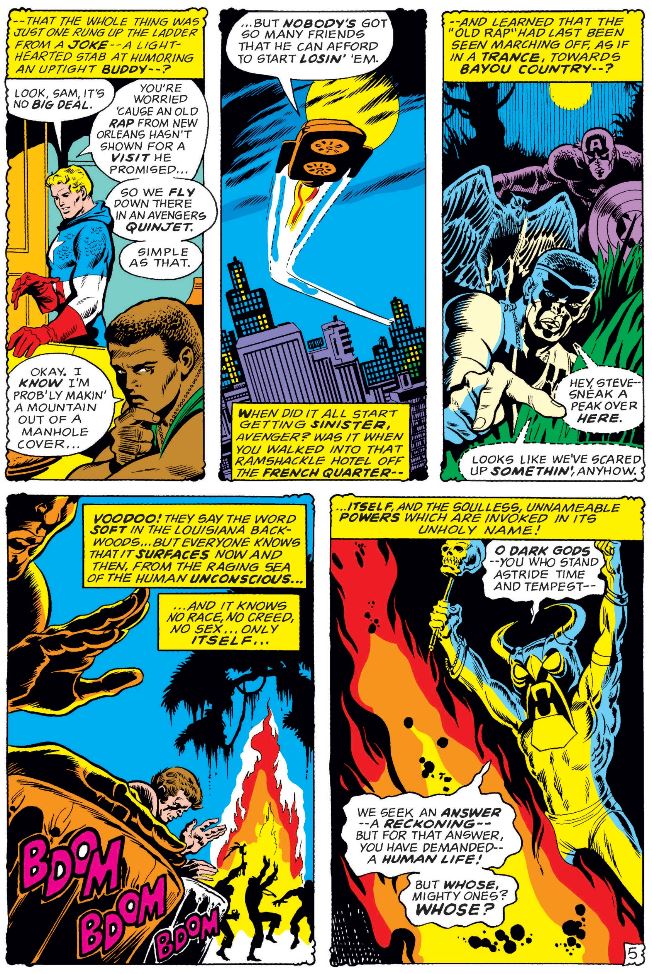 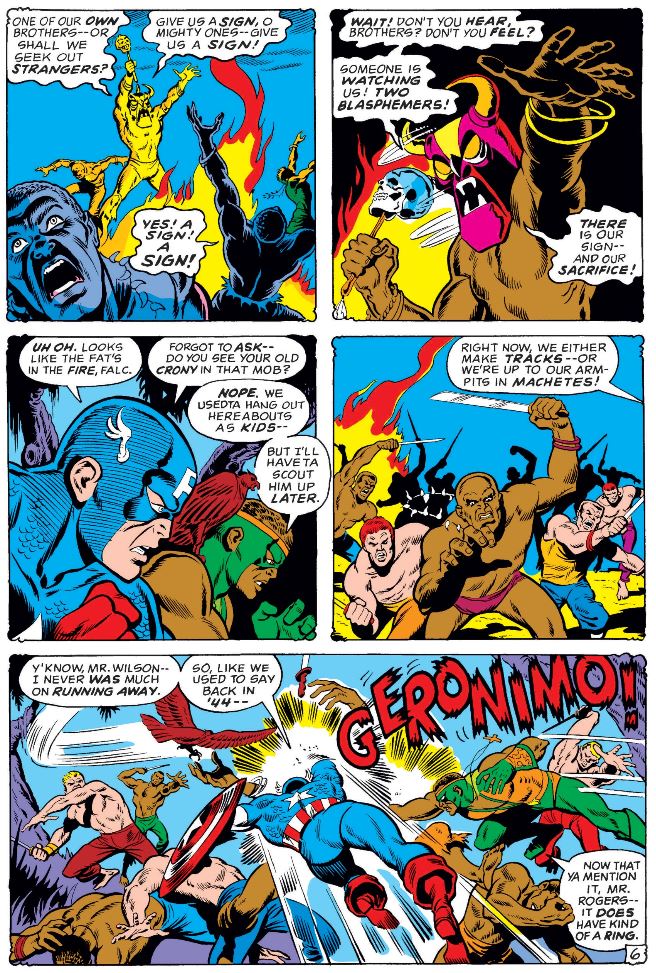 It’s always gratifying to see Cap and Sam falling right into tag-team battle mode. (It’s a long shot, but I like to think “Mr. Rogers” might have been a sly reference to Fred, whose beloved TV show began in 1968.)

After the fight ends, they find the friend Sam was looking for, who kept repeating map coordinates, which they soon reported to the Avengers.

(Isn’t it cute how Sam sticks up for Cap when he thinks the other Avengers are doubting him?)

The same three Avengers as above—Thor, Iron Man, and Goliath—accompany Cap and Sam to the coordinates, only to find a monstrous statue and a giant slug. (Comics!) After Thor takes care of the slug with Mjolnir, they discover a cavern, in which Iron Man jumps, despite Cap’s objection. (He will grow used to Iron Man’s “grandstanding,” as we’ll see in many future comics.)

Love the “cross-company” joke in the last panel above!

What they find there is Psyklop, a one-bug-eyed creature from an ancient subterranean race who has captured the Hulk and is planning to use him as a power source to revive his people that they can invade the surface world. (Does the Mole Man know this guy’s stealing his schtick?)

Of course, the Avengers attack—Cap gets the chance to use the word “palaver,” and Falcon comes through with a unique save.

Eventually, Psyklop transports the Avengers (and Sam) back to the subway tunnel, and his and the Hulk’s story continues in The Incredible Hulk #140.

Two more quickies to wrap up this post… in Iron Man #39, the Avengers (again with the Falcon, who doesn’t join officially until Avengers #184) come to the rescue of their armored colleague, with Cap uttering the word “sweetheart”—maybe he was doing his famous Bogie impression— and making a reference to yet another famous Rogers.

Cap then gets a little short with Iron Man (not for the last time), but then criticizes Sam for doing the same. (It’s fine for Cap to poke into Tony’s business, I guess, but not for anyone else!)

Finally, in the Inhumans story in Amazing Adventures #8 (which also featured a Black Widow tale), we discover that Cap does not yet know who the Inhumans are. 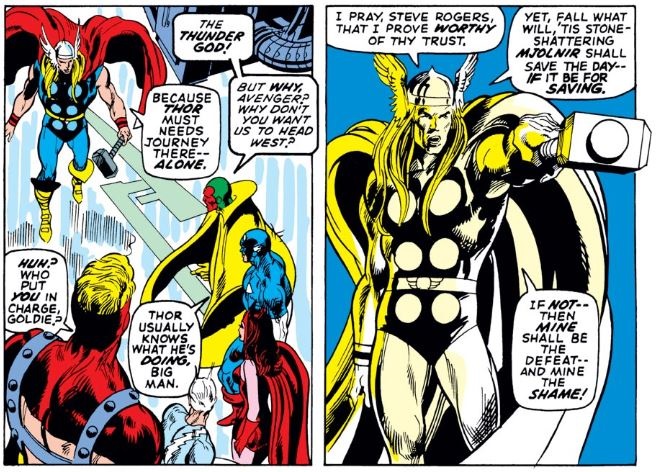 He does, however, show respect and trust in his Asgardian colleague, who returns the favor—appropriate for two Avengers known for their virtues.

Collected in: Iron Man Epic Collection: The Fury of the Firebrand and Marvel Masterworks: The Invincible Iron Man Volume Eight

Collected in: Inhumans: Beware the Inhumans, Marvel Masterworks: The Inhumans Volume One