This four-part story is light on ethically relevant material, focusing instead on Captain America’s battle alongside the Falcon, Sharon Carter, and Nick Fury against the uninspiring Grey Gargoyle. (Only one shade to this fella, and it’s a drab one.) However, it does start with some soul-searching on Cap’s part, inspired by an intriguing offer from the New York Police Department at just the moment he’s questioning the meaning of his life as Steve Rogers.

…but Cap doesn’t know this, and eagerly embraces it, especially once he finds out it doesn’t involve Captain America at all.

The case involves police officers being abducted, so the commissioner wants Cap to go undercover as a beat cop to draw the villains out. Unfortunately, Cap is short with the man, probably due less to the mission than his “own nagging hang-ups.”

“Gee, what nagging hang-ups?” you ask (especially if you’re new to this blog). Happily for you (if not for him), Cap lays it out for us. 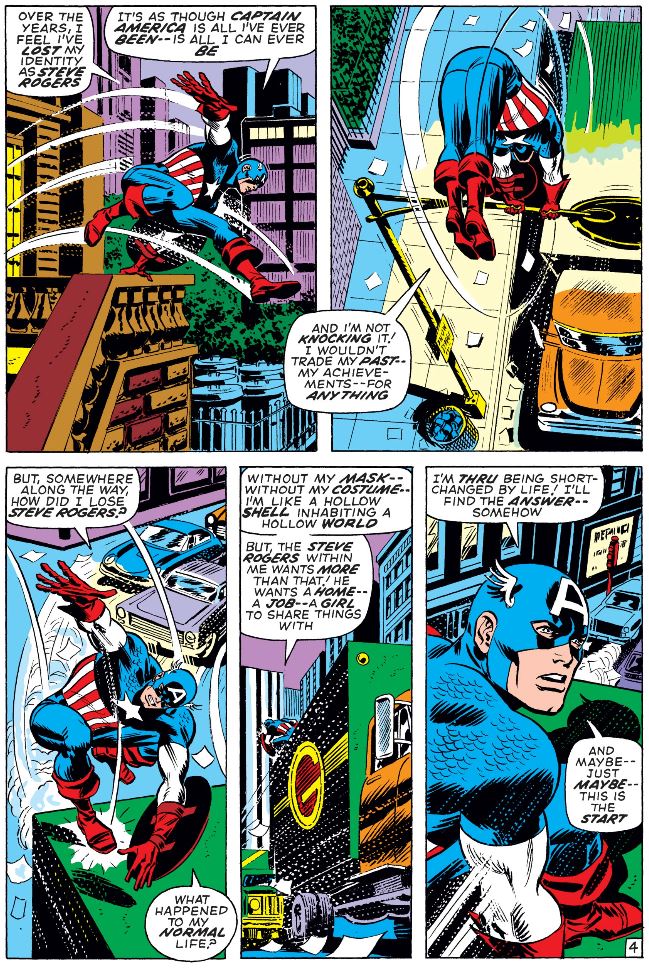 This is the existential crisis that Cap has faced almost since his defrosting many years ago: his identity as Captain America is well defined, but has pushed out Steve Rogers, an identity which has lost all focus and content for him. (Never mind that the public may still believe “Steve Rogers” is dead after Cap faked his death in issue #111.)

This new mission is a chance for Steve Rogers himself to have a role and purpose in this world, much as he did in World War II (however slight), and because of this Cap considers remaining a police officer after the commissioner’s special mission is finished.

Speaking of Sam, our fine friends in S.H.I.E.L.D. summoned him, not for a special mission of his own, but just to ask if he knows where Cap is. (Real nice.) But it does give us a chance to check in on Sharon, who is obviously still stuck on the Sentinel of Liberty.

Back on solid ground, Steve Rogers reports for duty and meets his creator… 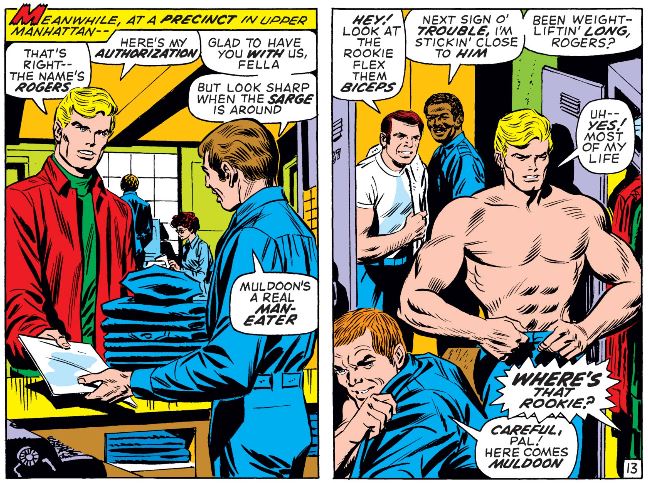 …Sergeant Muldoon, whom penciller John Romita, Sr., modeled after Jack Kirby, and who also reminds Steve of another Kirby creation from his past (whom we remember from such comics as Tales of Suspense #63).

To think, he could have just put on a pair of glasses!

And with that last line, Cap seems to have found the other half of his life, a reason for Steve Rogers to be. (If you think this is going to last, well…)

Soon, Patrolman Rogers finds himself tussling with a gang until a local reverend breaks up the fight. Garcia and Steve quickly form a mutual admiration society—and the reverend’s comment about Steve’s not drawing his weapon is well taken.

That last comment strikes me as odd, coming from a man who normally does not lack for faith in the human race… he must have really seen some stuff on his first night on patrol!

By the way, the noise Steve heard led him to a stonecutter’s yard, where he found the missing police officers—and Reverend Garcia—turned to stone, and then comes face to face with the Grey Gargoyle himself (who does that sort of thing). As I mentioned at the get-go, this is definitely the last interesting part of these four issues, so we’ll go through the rest of the story fairly quickly (with very little attention to the actual fight).

For instance, in issue #140, Steve Rogers, back in uniform, is looking for Sam, but instead finds Leila Taylor, an activist with whom Sam clashed in the last issue. Below, we see Steve’s naivete regarding relations between the African-American community and the police.

It would have been nice if Steve’s brief time as a police officer had been used to explore more issues like this—in the spirit of other stories of the era that dealt with Cap confronting the counterculture and social unrest in general—but unfortunately it wasn’t.

Afterward, Cap gets drawn up the S.H.I.E.L.D. helicarrier, where he is reunited with Sharon. Will this be awkward, seeing as they were on the outs since Cap felt Sharon betrayed him a couple times (one of them valid) a while back, and in issue #137 they missed each other, with both of them taking it badly? 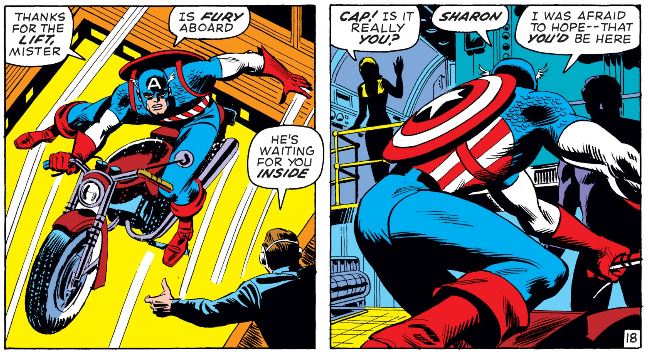 Well I guess that’s that then. (Maybe Stan Lee wanted to put an end to their never-ending conflict, and I for one do not blame him—although, as we’ll soon see, he may have been a bit too tidy about it.)

In issue #141, we see that the Gargoyle put the whammy on Sam, but in a different way: transforming his body into movable stone while making him obey the Gargoyle’s commands. And guess what those commands were?

This battle resembles those between Cap and Bucky in which Bucky (or a stand-in) is under mind control and Cap has to appeal to their friendship to break through. (For instance, see the recently discussed Captain America #132, as well as the not-to-be-discussed-any-damn-time-soon Captain America, vol. 5, #14, and the Captain America: Winter Soldier film).

Back on the helicarrier, Sharon tries to help but Cap is just an ass—leaving Nick Fury to be the voice of reason (sort of). And we learn that Sharon has a Ph.D. … albeit in “metaphysical psychology,” which apparently has something to do with psychic abilities.

Once all our pals catch up to the Gargoyle trying to break into a government institution to steal the deadly Element X, the Gargoyle turns Nick and Sharon to statues (whom Cap rescues and loads onto a hover-life-raft) and Sam again into a stone henchman, although this time Sam manages to resist from the start.

Oops! Close one, Cap. The page below ends with a same kind of confrontation of wills that Cap and Sam had before, luckily with the same outcome.

By issue #142—the first issue written by Gary Friedrich, who recently passed away—Cap has saved his friends but the Gargoyle had escaped into the installation. But by all means, Cap, patch things up with Sharon first. 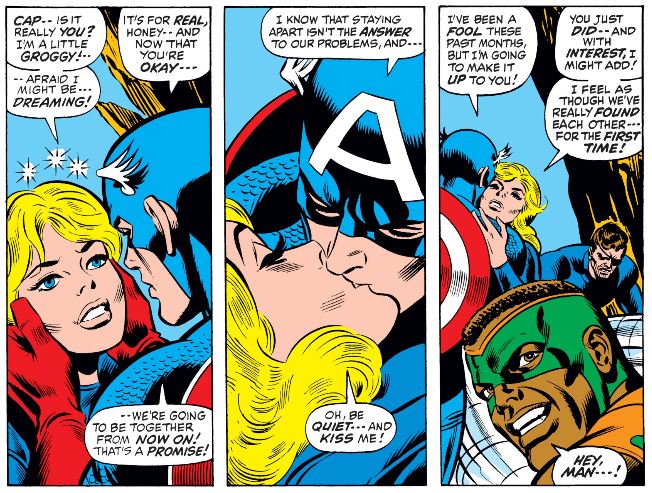 And that’s what I meant by wrapping up their problems a little too neatly (although this doesn’t mean everything’s settled). It just seems too pat to me, but maybe it’s just me.

After this it’s just fight fight fight, culminating in a nice display of renewed cooperation and partnership between Cap and the Falcon to defeat the foe they should have taken care of in one issue. 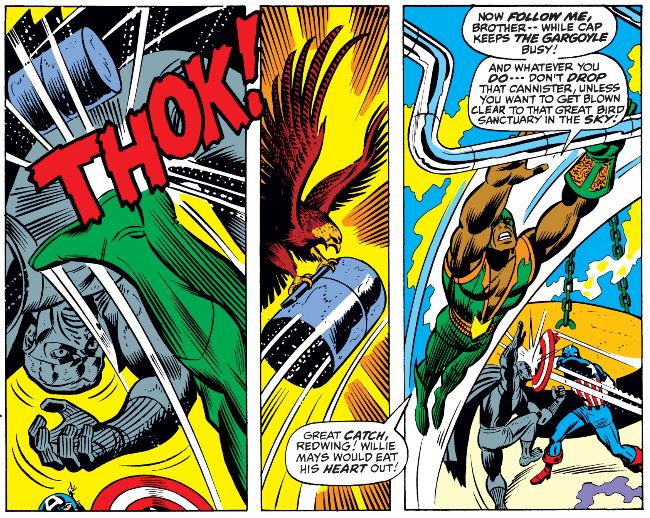 And our friends give us a welcome message (or two) as they bid us fare well.