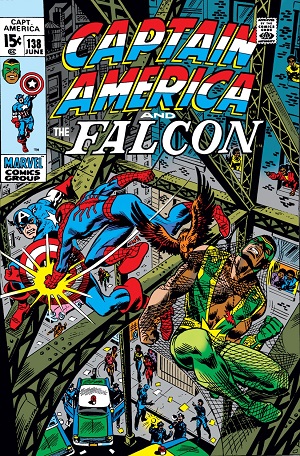 In this two-parter, Captain America and the Falcon meet Spider-Man, but this is a not your garden-variety team-up—both Cap and Sam are dealing with things that threaten to pull this new partnership apart just several issues after it began.

Issue #137 picks up when the last issue left off, with Cap and Falcon emerging from the Mole Man’s lair, which had been invaded by the US government’s Project Earth Dig. Cap and Sharon are still on the outs, since she and S.H.I.E.L.D. set him to flush out a traitor in their midst in issue #127, and even after they crossed paths briefly in issue #135, they haven’t managed to reconcile yet. As of issue #136, Cap was feared dead, which explains Sharon’s relief below.

We’ll return to Cap and Sharon soon, but for now, just relish how easily Cap seems to convince the US government and military to abandon Project Earth Dig—designed to get rid of nuclear waste miles below the Earth’s surface—after Cap tells them of the environmental peril (and Mole Man’s wrath).

Whew, I sure am glad that’s settled! How forward-thinking and reasonable they are, just like in the real world.

Oh, back to young love: after Cap thanks Sam and makes a jab at his own age (which I always appreciate), he thinks about Sharon, whom he just missed but assumes she simply left, and as a result is short with Sam. Not particularly virtuous behavior, of course, but we do often see it when the situation with Sharon gets under his skin.

And it isn’t just Cap who feels abandoned. 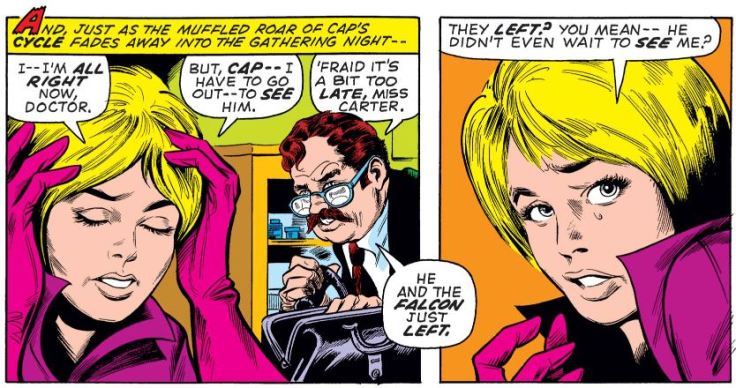 Back on the Capcycle, Cap and Sam engage in some guy talk, and once again we see how this business with Sharon has Cap bothered. At least Sam is very understanding.

Due to Cap’s mood, Sam becomes determined to prove himself as an independent hero.

He soon sees the friendly neighborhood Spider-Man swinging through… umm… the neighborhood, and decides to make his bones by bringing him in. But then he sees a mugging in progress, and so wisely decides to stop that instead.

When he gets back to his rooftop perch, he nearly loses his head… but gets the apology he deserves from a man who knows when it’s necessary.

This is another example of a small gesture that’s nonetheless meaningful: Cap isn’t perfect, and can behave badly at times, but usually he recognizes it (eventually) and takes responsible for it, especially when it hurt someone he cares about (even just a little bit).

When Falcon does catch up with Spidey, he finds himself outclassed, and Spidey adds insult to injury, making Sam even more intent on proving himself. 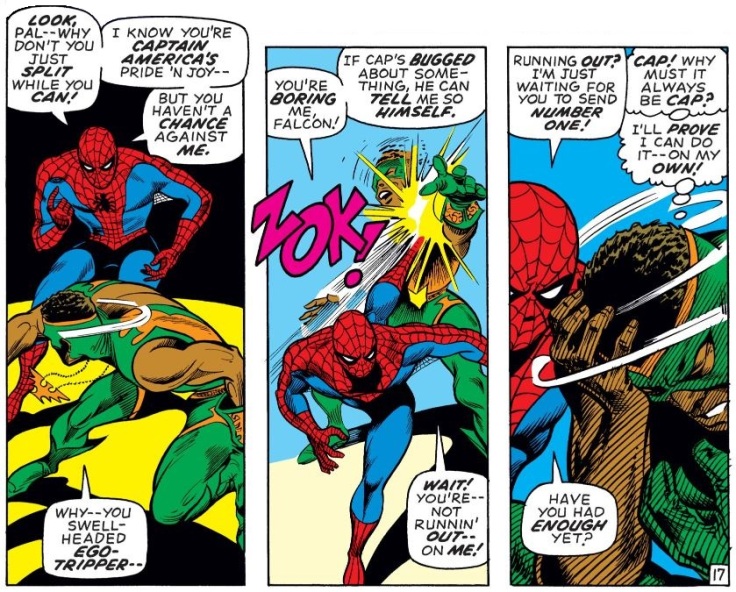 And now it’s Sam’s turn to be short with his friend, albeit for different reasons.

Those guys at the bottom? Just Stone Face (from issue #134) and his crony, who drive much of the action as we start issue #138. But first, let’s see how Sharon is driving Cap batty this time. 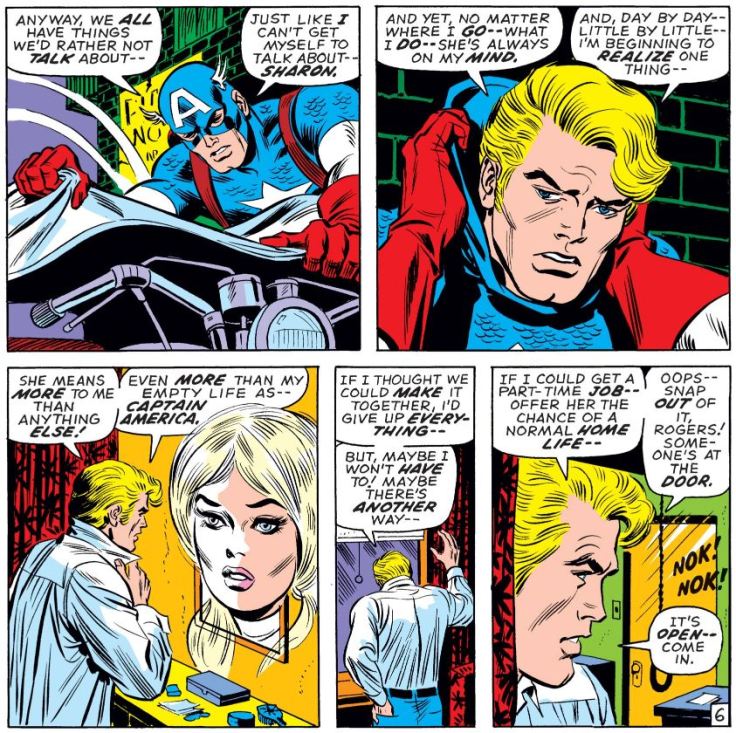 This is not his ordinary romantic moping, but touches on his doubts about his life and what he’s doing with it, which have been an issue since his defrosting. We’ll see what he does about this in the next issue, but for now his thoughts are interrupted by a young visitor, Sam’s nephew Jody (also from issue #134), whom Cap calls Toby.

Although this wasn’t actually Sam’s beef, as we know, earlier in the story he did run into Stone Face and his thugs, who subdued him and took his hostage, hoping to use him to manipulate Captain America. Meanwhile, Spidey’s also looking for Sam (on whom he planted a Spidey tracer after they fought in the last issue), and it isn’t long before he and Cap meet up.

If it doesn’t stop raining, that is. (At least we get a nice portrayal of Cap’s determination and dedication to his friend.)

When Cap does get to the Falcon, he finds Sam and Spidey fighting—after Spidey saved him from Stone Face, no less. Cap defends his partner until Sam comes to his senses and tries to do the same for Cap.

At least we know what sound Cap’s shield makes when a man with the proportionate strength of a spider hits it!

Once our three heroes finally straighten things out about their true enemy, they get to the really important matter: boosting the Falcon’s ego. 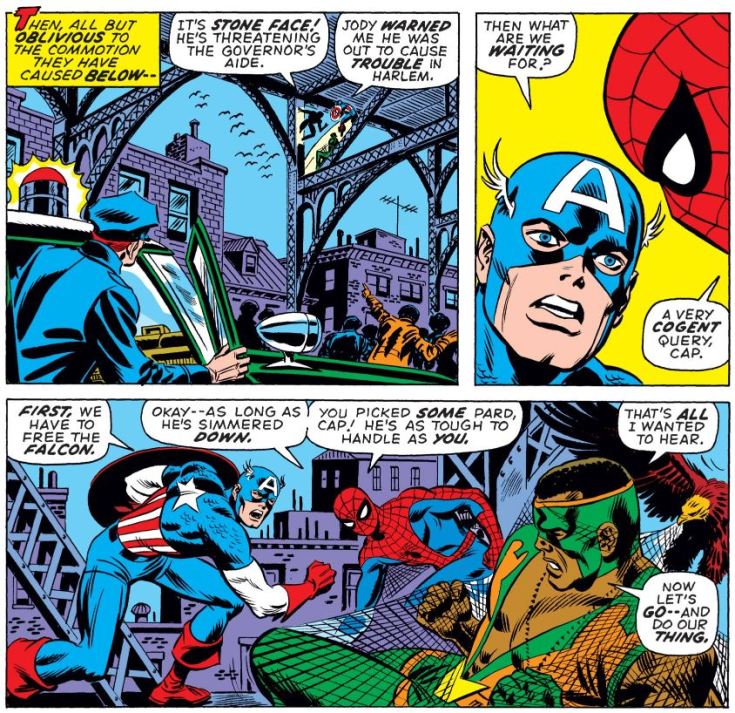 When they finally catch up with Stone Face, we see Cap and Sam back to their old rhythm, bantering and beating bad guys (with Cap making an age gag again, tying back nicely to the beginning of the story).

But wait… we’re not done? What’s Cap up to now? Could this have something to do with wanting a real life so he can be with Sharon (as if that would make her quit S.H.I.E.L.D.)?