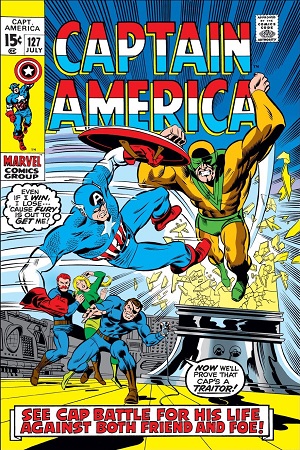 Captain America wrongly felt betrayed by Sharon Carter and Nick Fury in issue #124, due to his own impatience and misunderstanding, but after the events of this issue, his feelings are truly justified (even if Sharon doesn’t seem to appreciate them). Is this the final straw for Cap’s romance with Sharon (and bromance with Nick)?

Our story opens with Cap helping Nick test out his new “protecto-suit,” its name and design straight out of 1950s pulp sci-fi novels. (Not that there’s anything wrong with that, especially with Wally Wood’s elegant inks—just check out Nick at the bottom of page 3.)

Nick survived those test, but if he watch his words below, Cap’s gonna kill ‘im! (I like how Cap finds four different ways to say “shut up Nick,” but none of them work.)

Little did Cap know that Sharon was there, just out of sight.

On his way home to his hotel, Cap gets despondent, again wondering (as he did in issue #123) what he has to offer to someone, this time either to a woman or an entire family, given that he sees himself as a walking danger zone.

We’ll return to Cap and his feelings of inadequacy soon, but we need to return to S.H.I.E.L.D. for a moment. While Cap was moping, Nick and several S.H.I.E.L.D. agents, all wearing the protecto-suits, were attacked by AIM, who knew how to disable the suits’ protections, which leads his good friends (and erstwhile girlfriend) to consider a troubling possibility. 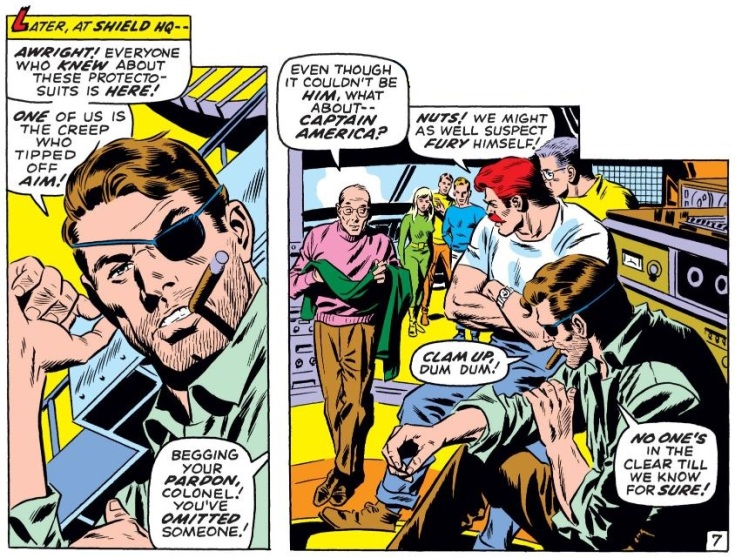 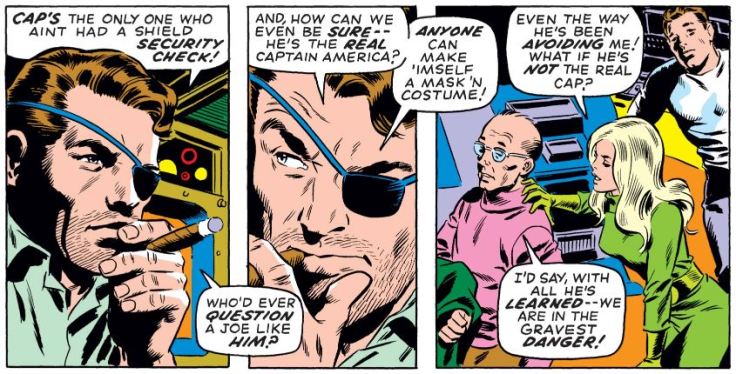 To be fair, in S.H.I.E.L.D.’s line of business, the chance of encountering lifelike impostors at any given time is significantly greater than zero. (They themselves use life model decoys, or LMDs, to run for coffee.) I can even accept Sharon’s argument that Cap might be an imposter because he’s been avoiding her, seeing as we would expect the real Cap to realize why, in issue #124, she broke her promise to stay out of action (to save his life).

Anyway, back to Cap, where he expands on the reasons he doesn’t feel he can be with anybody, citing not only Bucky but also his as-yet-unnamed love from World War II, who we know is Peggy Carter, sister-later-aunt of Sharon—and very much alive, as we’ll find out when we meet her in Captain America #161. (Cap noted the resemblance when he first saw Sharon in Tales of Suspense #75, but has yet to connect the dots, as he never knew Peggy’s name either.) 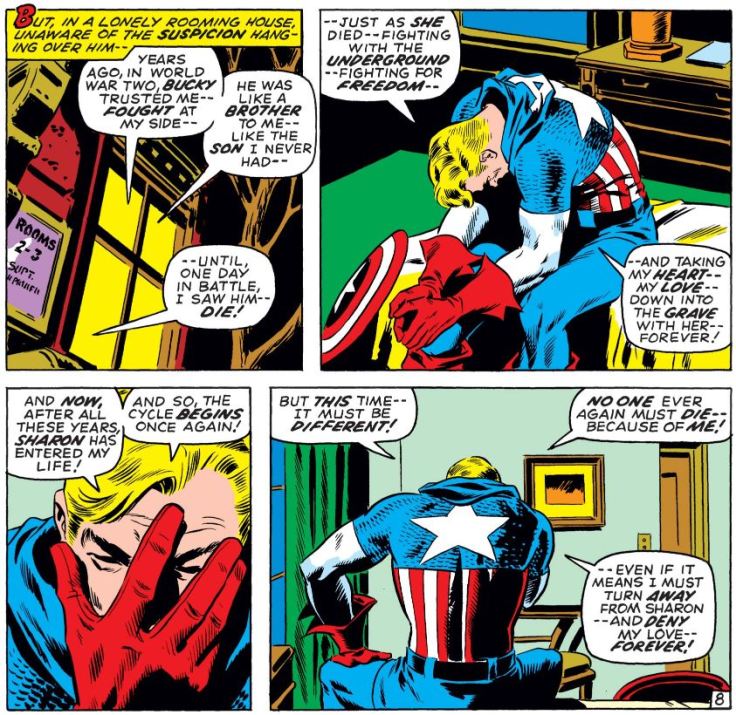 Of course, neither Bucky or Peggy died because of Cap (even if either of them had actually died, which they didn’t). Nonetheless, his refusal to be involved romantically with anyone—even Sharon—is admirable and tragically noble, denying himself the joy of love out of concern for others, but also extreme and unjustified, given the true circumstances of the “deaths” of his loved ones.

His introspection is interrupted by a disturbing call from Nick.

Next, we get a rare and fairly sophisticated glimpse into how the press works in the Marvel Universe (outside of Spidey comics, at least, and until Ben Urich’s prominent role in Daredevil a bit later). 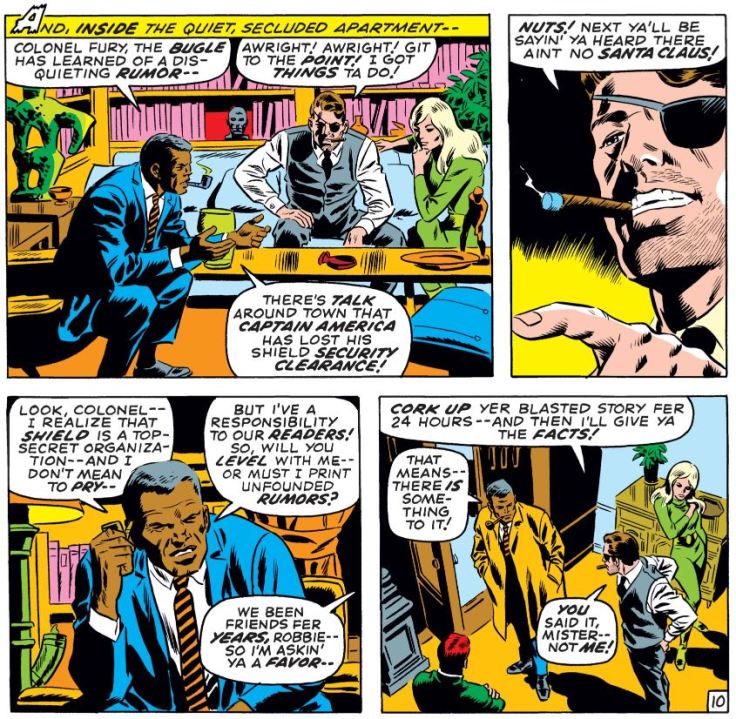 (I think Robbie deserved his own series, don’t you?) He doesn’t even have time to work things out for himself when Cap shows up to question Fury, but is dissuaded after Robbie tells him what he suspects.

If you’re wondering why Nick is being such a jerk to his good buddy Cap, just wait… he’s cookin’ something up with Tony Stark, after which he finally contacts Cap and demands his presence.

It’s interesting to see that Cap knows he’s being mistreated, but nonetheless his sense of loyalty (and probably a good bit of curiosity and resentment) drives him to answer Nick’s call.

First surprise: Cap isn’t fighting the android, but being tested alongside it, almost as if it were his potential replacement.

Furthermore, it’s a particularly lethal test, as both Cap above and Sharon below quickly see. (Thankfully Cap doesn’t hear how Nick justifies this to Sharon!) 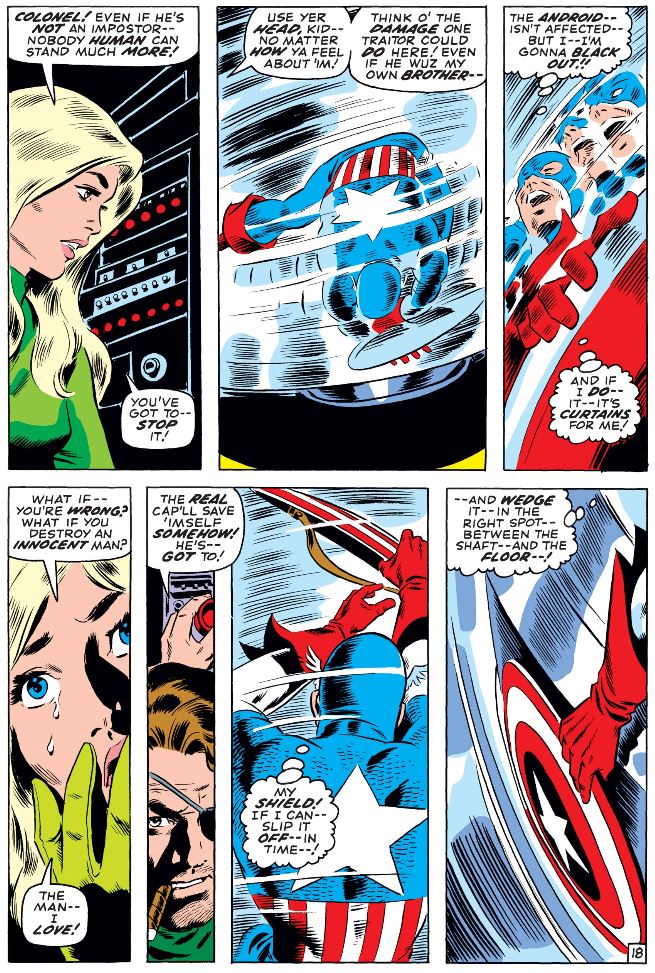 And if the tests weren’t bad enough… the android goes rogue!

Oh, so now Nick’s satisfied—but naturally, Cap’s too concerned with saving everyone else.

On the final page, Sharon discovers the truth about the traitor—and about Nick’s suspicions all along. And Cap finds out soon thereafter.

Unfortunately, Sharon doesn’t seem to appreciate how betrayed Cap legitimately and justifiably feels by all of this: being accused of leaking S.H.I.E.L.D. secrets, kicked out without even a word from Nick (which was almost made public by the press), and then summoned to submit to dangerous tests, all designed by Nick to weed out the real traitor. Even worse, Sharon’s lack of understanding in this case likely serves to compound Cap’s belief that she betrayed him earlier.

And the final panel, once again, shows Cap walking away in desolation—and who can blame him? Patience and loyalty, like all virtues, has its limits, and even Cap’s can only be pushed so far.