This issue is another entry to Captain America’s ongoing saga with both his love interest, Sharon Carter, and his erstwhile allies, Nick Fury and the rest of SHIELD. I have to warn you, Cap is not at his best in the issue, being a neanderthal with respect to Sharon and then flying off the handle at her and Nick, exhibiting the black-and-white thinking he’s all too often accused of—accusations that I’ve spent a lot of time defending him against!

To be fair, Cap’s not at his best, by his own admission, as the story begins. 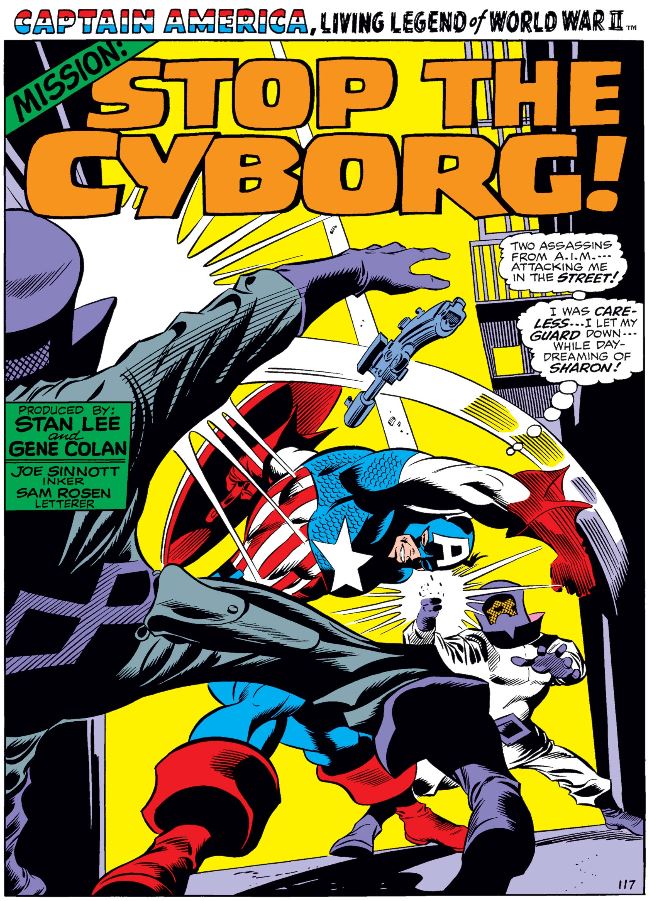 Once Cap gets his bearings, though, MODOK’s thugs are no match for him (giving him a chance to gloat about his karate). In fact, they’re so insipid that Cap knows something is up—a level of suspicion that serves him well here but will backfire later in the issue when directed at the wrong people.

In fact, MODOK knew they’d fail, but they’re just pawns to him, leading to the creation of… we’ll see.

Meanwhile, Cap returns to thinking about Sharon, and as usual, heads to SHIELD—this time, more determined than ever to fix things once and for all. 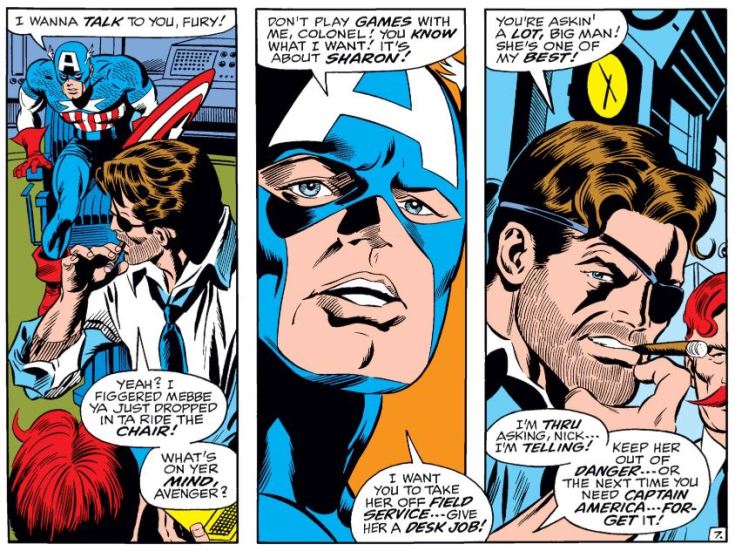 We’ve seen in earlier issues that Sharon will not quit SHIELD to be with Cap because her work and mission means too much for her—a devotion that Cap can understand and, at his best moments, admires and respects. This, however, is not one of those times. Because he cannot convince Sharon to retire, he goes over her head and gives Nick an ultimatum: he threatens to withdraw his support from SHIELD if Nick doesn’t take Sharon out of the field. Admittedly, Cap has no obligation to SHIELD, but this is nonetheless an arbitrary refusal to offer his help and expertise in order to manipulate both Nick and Sharon to assuage his fear of losing yet another loved one.

But it seems to work…

…and even Sharon seems to accept it (although that expression on her face could indicate otherwise).

Just then, Nick sees MODOK’s latest creation, the Cyborg—no relation to Vic Stone at the Distinguished Competition—robbing a bank. Sharon forgets about her recent promise (actually Nick’s, but let’s not quibble), but Cap is quick to remind her, adding what passes for his justification. 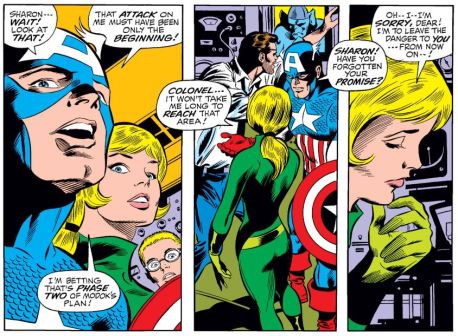 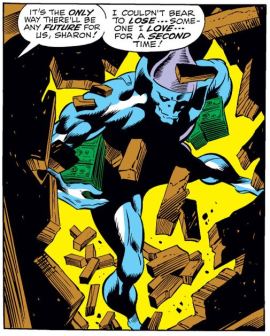 Later, Sharon gets a call from Nick summoning Cap, but only after relaying the message does she learn it was a fake call setting a trap. 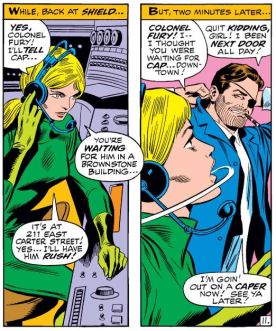 Wow, that’s some terrific phone security they’ve got there at the preeminent global security agency.

Even though Sharon doesn’t want to break her promise to Cap, her better judgment tells her that saving his life is more important, so she leaves to meet him… only to fall into the trap MODOK meant for Cap.

When Cap arrives on the scene, he’s surprised to hear Sharon, who’s supposed to be confined to her desk, dagnabbit.

As Cap fights MODOK’s mighty creation—yet another foe who is stronger but less skilled in battle than Cap—at least he’s focused on the battle at hand, and not on how Sharon and Nick betrayed him. 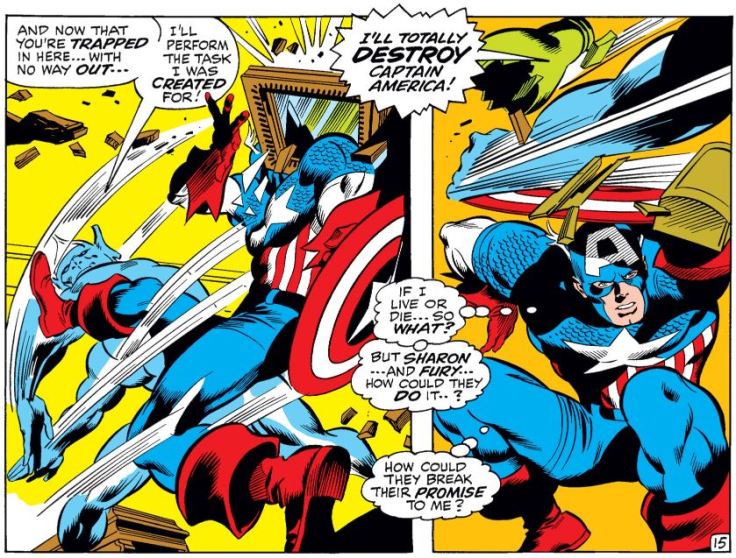 Needless to say, Cap prevails in the end, with MODOK letting him know that he was watching, just before Nick and SHIELD showed up. But Cap is not interested in celebrating his victory or the fact that he and Sharon are fine. Because they are definitely not fine.

Sharon has no opportunity to explain the context or the reasons she came into the field (or that Nick had nothing to do with it), much less that it was hardly a casual decision (although it was quick, because she has felt she had to act to save his life). Cap apparently believes he has all the facts and the situation is cut and dried.  It’s almost as if he was expecting this betrayal and therefore was all too willing to see it the first chance he got, but this isn’t like him. His paranoid suspicion is more consistent with the emotional conflict he was experiencing before getting his way than the calm he should have felt afterwards. Odd and quite regrettable—especially in light of the actual betrayal soon to come.