This issue, Captain America is still reeling from the betrayal he thinks he suffered at the hands of his beloved Sharon Carter and his “beliked” Nick Fury in the last issue, although we know he was just too hurt and impatient to wait for the quite reasonable explanation Sharon would have offered. Luckily for him, the most trusted man in America (in 1970, and for quite a time afterwards) comes to his rescue… with adventure!

As the issue opens, Cap is in a rage, feeling like a rat in a cage. (Sorry, Billy.)

Not quite the revelatory introspection we saw in issue #122, but it’ll do, combining Cap’s romantic woes with his feelings of general loneliness and want for a social life outside his service as the Sentinel of Liberty.

All it takes is a wiggle of the rabbit ears, and the smooth reassuring voice of Walter Cronkite, to remind Cap that there is a world outside his hotel room. 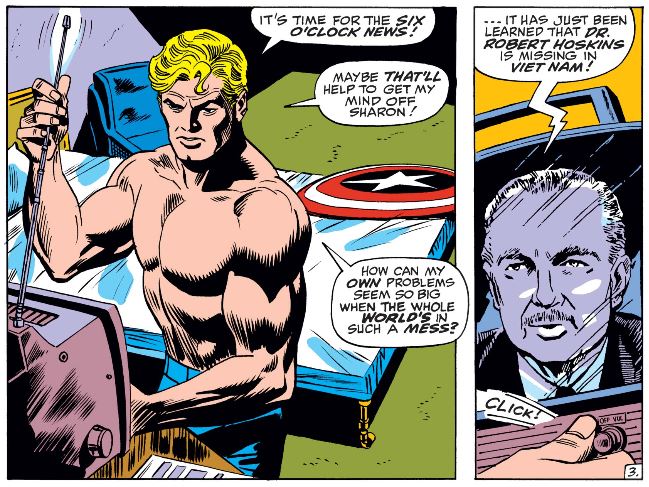 Cap makes no much mistake, knowing Dr. Hoskins’ reputation all too well, and giving him a cause to knock him out of his reverie. 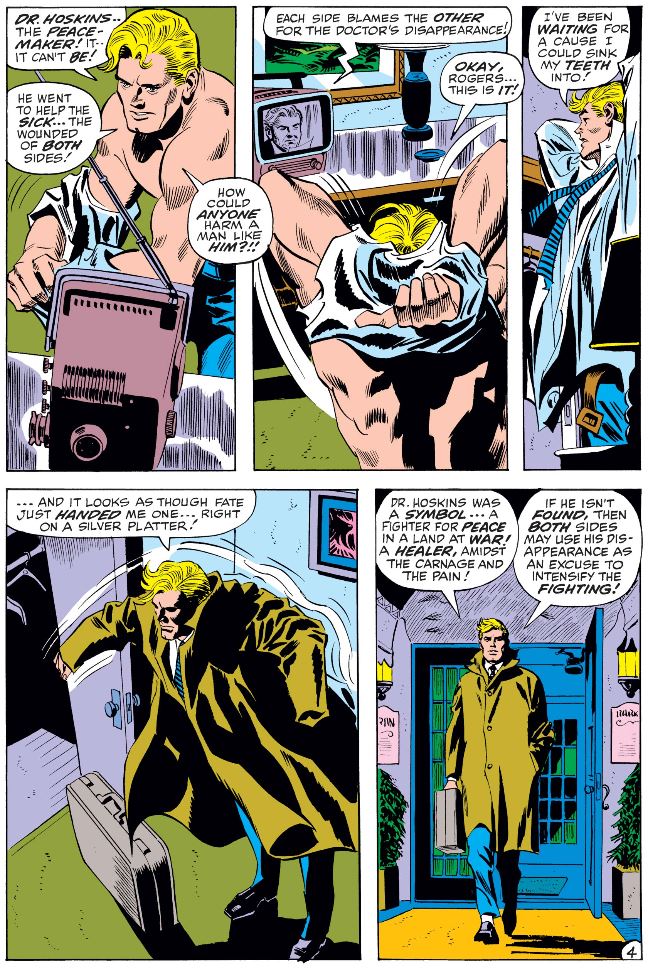 Notice anything wrong with the panels below? (Besides the fact that it brought up Sharon, though that’s merely unfortunate. “Must everything remind me of Sharon?”) 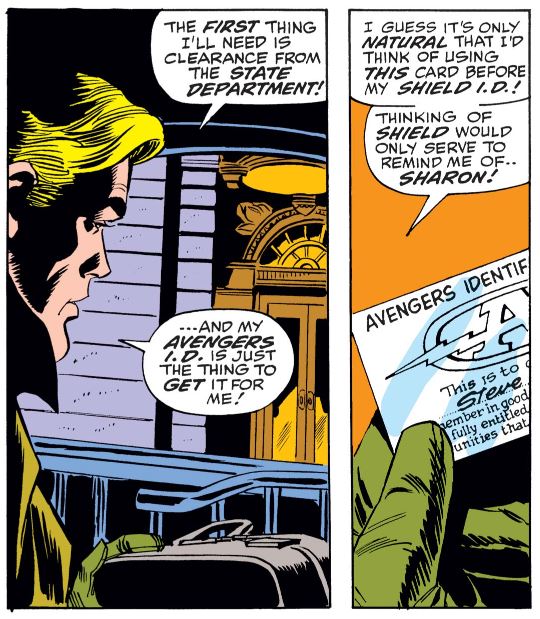 I’m presuming the name of his ID is Steve Rogers (although it could very well be Steve Austin, I guess). You will no doubt recall that, in issues #111-113, Cap faked his death, leaving a rubber mask of Steve Rogers to be found by investigators, so that when Cap reemerged, looking none the worse for wear, Steve Rogers would be considered a fake identity. Since then, Cap has struggled to get by without a name (having difficulty renting a place to live, for instance), and told a college professor as recently as issue #120 that his name was Roger Stevens. (Clever.) I don’t recall him revealing the truth to anyone, including the Avengers… but here we are.

After Cap gets to Vietnam, we hear some welcome anti-war sentiment from someone all too often accused of being a gung-ho fighting man. 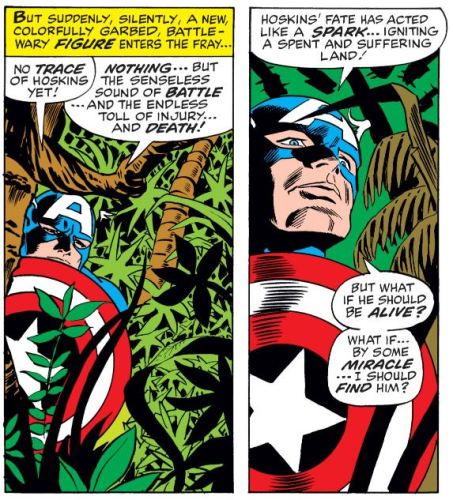 Also, we see a practical consideration from a bright-garbed hero (especially one trying to sneak through a terrain with a slightly different palate).

At the risk of reading too much into every word—remember, I offer a money-back guarantee in case of any dissatisfaction, however slight or unreasonable—in the panel to the right I see a surprisingly worded but commendable display of ideal virtuous courage. Although this may seem like an admission of cowardice in the face of danger, his words actually show that Cap realizes what it means to be brave in a wise way: not cowardly, but neither is he foolhardy enough to run headfirst into danger without being prepared…

…which, unfortunately, is exactly what he does. He acknowledges that he should be more careful, but chooses to remain willfully ignorant in order to justify his excessive courage.

Below, he uses feigned incompetence to lure his enemy out into the open, and when he doesn’t recognize them, lets himself be captured in order to find out who they’re actually working for—both instances of subterfuge he normally prefers not to engage in, but does when necessary.

Well look who it is: none other than the Mandarin, on loan from Iron Man’s book, and looking snazzy in his villainous purple and green with his famous Ten Rings.

Naturally, once Cap finds out what he had to know, he proceeds to defeat the Mandarin and rescue Bob Hoskins—sorry, Dr. Robert Hoskins—leaving the Mandarin possibly dead at the bottom of the chasm and paving the way for peace in Vietnam. (Ideally.) 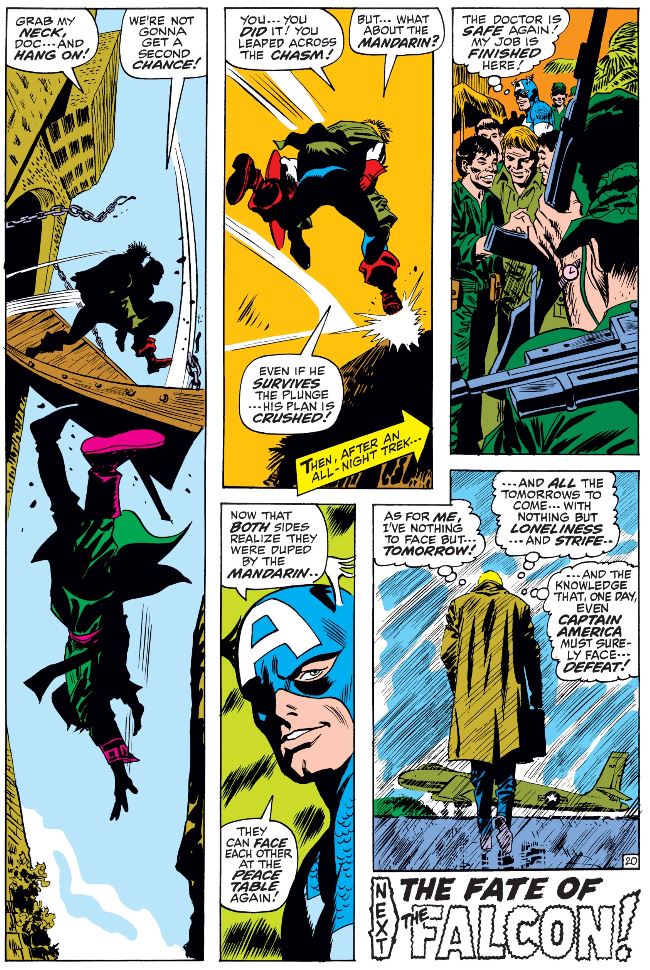 And as with so many recent issues, this one ends with our hero sulking off into the distance, his back to the reader, thinking of his lot in life, this time acknowledging not only his loneliness and continual battle, but also the inevitability of defeat.