Most of this two-parter is taken up by the tale that brings the Scarlet Witch and Quicksiler back into the fold, replacing the Wasp and Yellowjacket, who are leaving on a government research trip with Bill Foster (future Goliath).

Pietro, of course, makes quite an entrance—in new blue duds, which would be his standard costume for quite a few years to come—and naturally stirs them up, especially Clint, and even raising Cap’s ire. 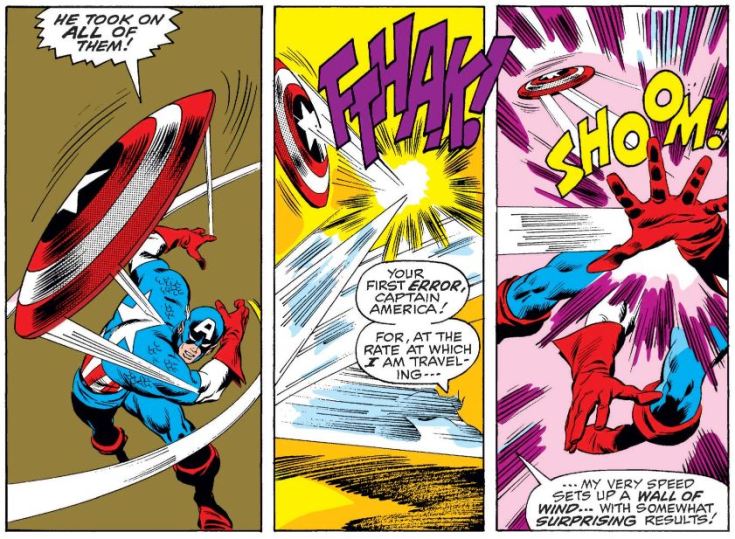 It takes the Vision, whom Quicksilver has not yet met, to stop Pietro by increasing his density and just standing there. (It’s nice to see these future brothers-in-law getting off to a good start.)

After Pietro gets the wind knocked out of him, Cap makes sure he has a chance to tell his story (while you can imagine Clint thinking, “I could just squeeze him a little too hard, no one would have to know”).

The rest of the issue is taken up with Pietro telling the Avengers about… well, you can read issue #76’s splash page as well as I can tell you.

T’Challa—who, remember, is a technological genius on the level of a Richards or Stark—develops a device to get them in Arkon’s dimension to prevent him from destroying the Earth. But things do not go as planned when Cap “throws the switch.”

Note how both Black Panther (at the top) and Captain America (at the bottom) proclaim the distinctly anti-utilitarian position that, sometimes, a single life must be protected, even at the risk of losing many others—a concept that the Vision cannot comprehend (even if the single life, in that case, in that of the women he would eventually love and marry). Of course, we can expect that in their more sober moments, T’Challa and Cap would admit that when push comes to shove, and after every alternative as been exhausted, the few may have to be sacrificed for the many. It is rather that this concession is always the last resort for a hero, who will do whatever he or she can to save every life—it is the nature of a hero to refuse to concede any loss of life until absolutely necessary. (And it sounds very noble to boot.)

(Many years later, in New Avengers, vol. 3, #1-3, March-May 2013, we see Cap, Panther, and the rest of the Illuminati struggle with this exact situation on literally a global scale when incursion of parallel Earths into our dimension seems to require destroying them to save their own. We have quite a while before we get to that at this blog, but I do discuss it in my book The Virtues of Captain America on pages 90-91 and 135-136.)

Eventually, the Avengers cross the dimensional divide, thanks to Thor and his trusty hammer (that can seem to be as miraculously useful as a Cosmic Cube when it needs to be). In the climatic battle that follows, Cap returns to his familiar role as inspiring team leader. 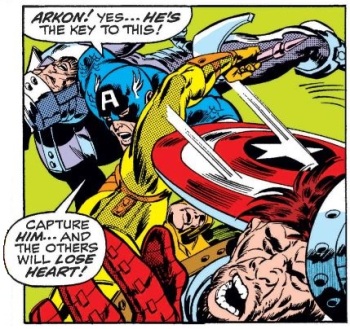 At the end, Arkon realizes his fight is over—long story—and relinquishes his hold on the Scarlet Witch, who returns to the Avengers with her brother. (They can’t just come back, can they? There has to be drama.)