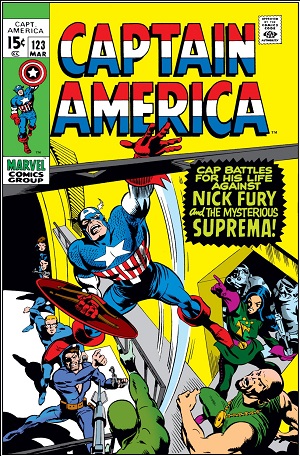 This issue introduces a dastardly duo that will reappear in a much more important storyline later, setting up yet another villain… I really like to see how writers adapt and build off the works of their predecessors. Plus, Cap gets back to giving martial arts lessons, gives us a couple classic panels—and takes a crack at detective work. (A certain Dark Knight would be proud.)

Cap doesn’t appear in the first seven pages of the comic, which instead set up the threat of Suprema and Scarbo, but I’ll show you the first two pages nonetheless. Revealed later: Suprema also seems to have mind-control abilities, which she relishes using against men in particular (although Scarbo seems genuinely loyal to her).

Any resemblance of Suprema to Viper/Madame Hydra (introduced in Captain America #110) is coincidental, I’m sure. (It’s all the green, it’s very striking and memorable.)

When we finally meet the title character over a third of the way into the comic, he’s giving judo lessons to Nick Fury and the rest of the SHIELD V-Neck Club. 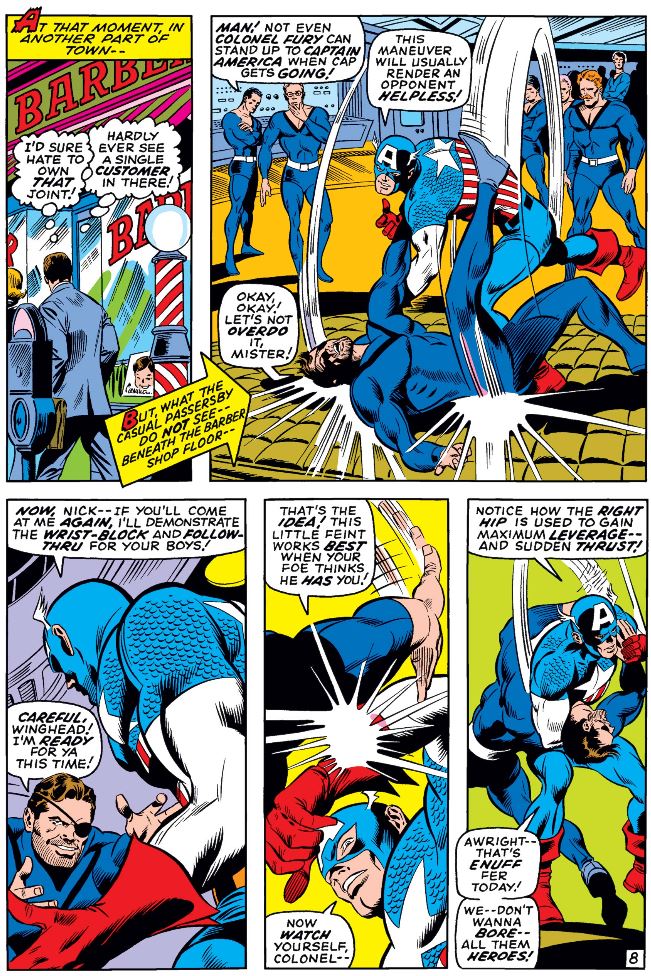 “How do I save face with the fellas?” Nick thinks to himself. (Shouldn’t have pulled that nasty trick on Cap a few issues ago, Fury.)

Cap reveals his true motive in visiting his favorite barbershop: finding his favorite SHIELD agent. And Nick royally steps in it. (I guess he doesn’t know about Cap’s proposal to Agent 13 on their first date, in Tales of Suspense #95, before he even knew her real name. Gotta save some mystery for later!)

Here we see a great one-panel summary of two issues with Cap’s relationship with Sharon. First, we see the more commonly expressed conflict between Sharon’s duty to her SHIELD post and her love for Cap. Second, Cap’s feelings of inadequacy and redundancy, expressed many times in general (especially in the last issue), now applied to Sharon. This second point is meaningful to me, because I write often about self-loathing, particularly in the context of romantic relationships, at my Psychology Today blog—with this post being particularly relevant, given Cap’s wording above!

But Cap doesn’t have a chance to look for Sharon, because Suprema finds Dum Dum Dugan and compels him to tell her where to find Nick Fury, who’s busy… shooting stuff… with the added bonus of finding a certain Sentinel of Liberty as well.

Cap suspects foul play (obviously), though he seems unaffected… until Scarbo tries to affect him more directly. (That sounded better in my head… oh well.)

The rest of Suprema’s thugs join in, shooting at Cap, who recognizes the need to step back and consider his next step, using judgment rather than instinct when it’s called for. (This may seem like a minor point, but I think it’s significant, given Cap’s reputation for simplistic reasoning.)

Unfortunately for Cap, the SHIELD agents (in blue) join Suprema’s thugs (in green), which only triggers his legendary resolve, determination, and sense of responsibility (“to find the answer” and “to set things right”). 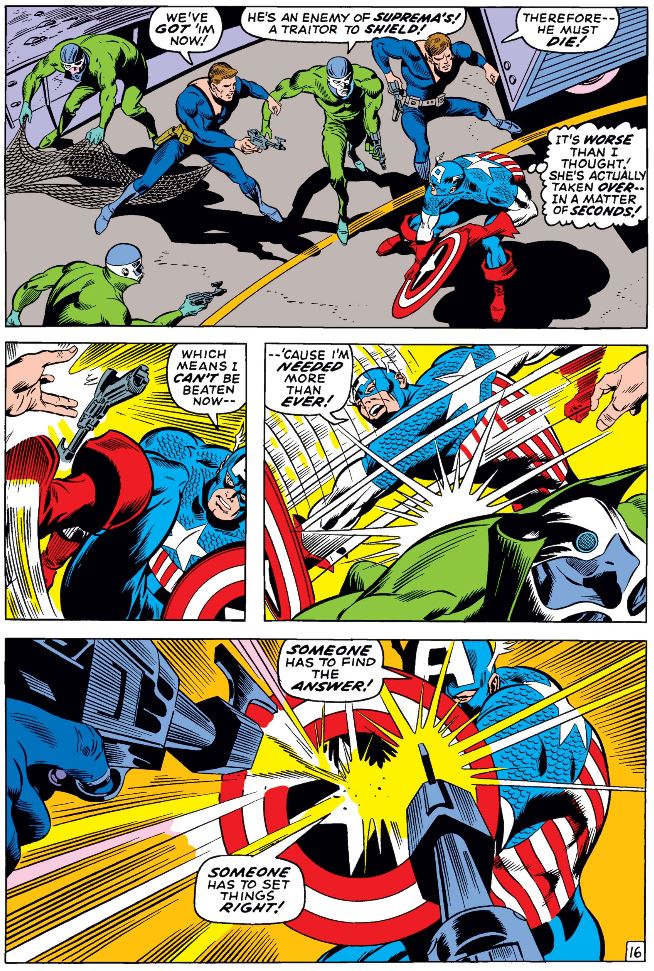 Once again, Cap strategically retreats, but this time to follow a lead. (Note also how he actually considers, even for a moment, that it might be he who’s wrong, rather than everyone else. Even if he wasn’t completely serious, this is another sign of his humility, a virtue in short supply these days.)

On the next page, welcome the infamous J. Jonah Jameson to our pages! (Just think, Cap is the one “costumed freak” he actually likes.)

Holy hypnotism, Cap! Sorry, I thought this was Detective Comics for a second. Seriously, though, we don’t see Cap do investigative work very often—that’s actually more in Sharon’s wheelhouse. (Maybe he’s trying to prove himself worthy!)

He returns to the scene of the battle—and for some reason, Suprema’s forces and the bedazzled SHIELD agents are still there—and Suprema finds her mental control weakening. Cap explains how he did it—although I don’t buy that he felt the electronic “vibrations” hit his shield—but not why he wasn’t affected. (Maybe it was the mind control “jammer” SHIELD installed in his cowl, way way back in Tales of Suspense #79.)

Suprema and Scarbo return almost two decades later as Mother Night and Minister Blood, respectively—which honestly are much better names—in Captain America #356 (August 1989), working with a young woman named Sinthea, whose friends call her Sin, and who gets her last name Schmidt from her father… well, you know. (We’ll get there, be patient… only 233 issues to go!)

In the meantime, let me blow up the final panel above, which is simply magnificent.

Of course, we would expect Cap to reject a villain’s offer to cooperate and “together we could rule the world!!!” But the way he does it is what strikes me: not defiantly, but depressed by the very thought, sulking away in the knowledge how power can corrupt and be corrupted. While most heroes laugh in the face of such a proposal, Cap seems disgusted and almost offended by it, turning it into a chance to remember “the evil men have done” in power’s name. Given his history, it makes sense that Cap would be especially sensitive to this concept, and hats off to Stan Lee and Gene Colan for realizing it and depicting it so well.