Here we start to discuss the legendary Jim Steranko’s all-too-short run on Captain America, including plotting, pencils, and colors on issues #110, 111, and 113 (with Jack Kirby doing his last work on the book for almost a decade with issue #112). In his short time on the book, Steranko put his distinct and unforgettable artistic stamp on it, and contributed a new logo to boot! (For slightly earlier Steranko brilliance, see the post on Strange Tales #159-162 from 1967.)

As the issue begins, we see the familiar themes of duty and loneliness, shown as only Steranko can:

Such a fantastic shot, showing Steve Rogers confront a larger-than-life of his alter ego, while he wonders which is the real man.

(For a much better look at Steranko’s art on his three issues of Captain America than I can offer, check out this post by John DiBello at 13th Dimension.)

Before he knows it, Cap is witness to a rampaging Hulk, and as he takes charge of the situation, we see the military personnel on hand show him deference and respect, less for his title (which is honorary) and more out of respect for his experience.

After the Hulk has been incapacitated—temporarily—by a shell, Cap approaches him with sympathy, fully understanding that the creature is not in control of his actions.

Nonetheless, when the Hulk comes to, the two engage in battle, the stakes of which become higher once their mutual friend, Rick Jones, arrives and tries to calm the Green Goliath. This… doesn’t work, but the Hulk flees, leaving an injured Rick behind, and triggering Cap’s guilt about Bucky. 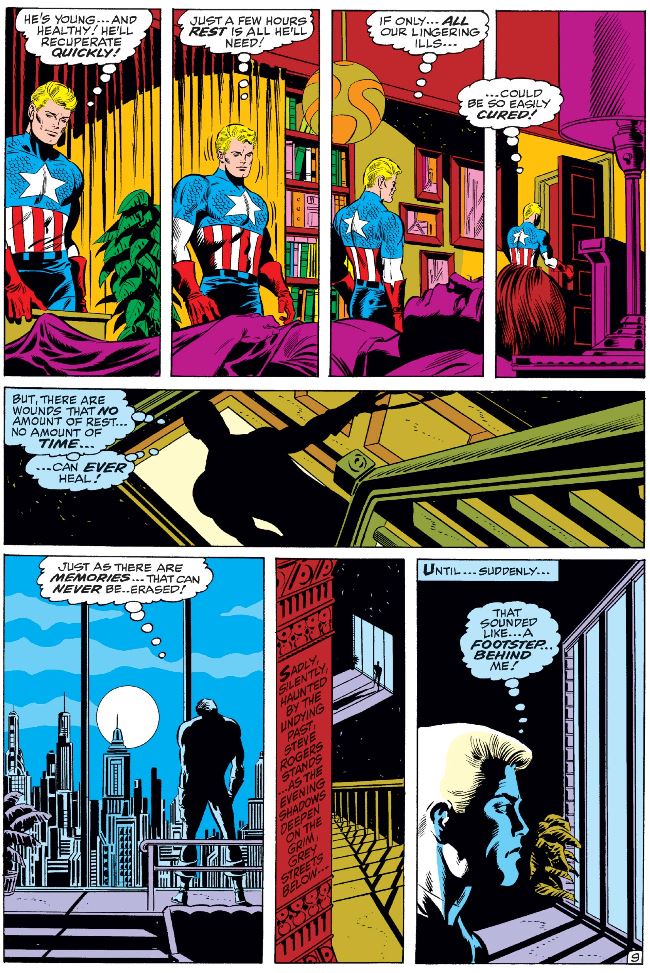 …until the lad shakes him out of it in pretty much the worst way possible, given the thoughts that are torturing Cap at the time. 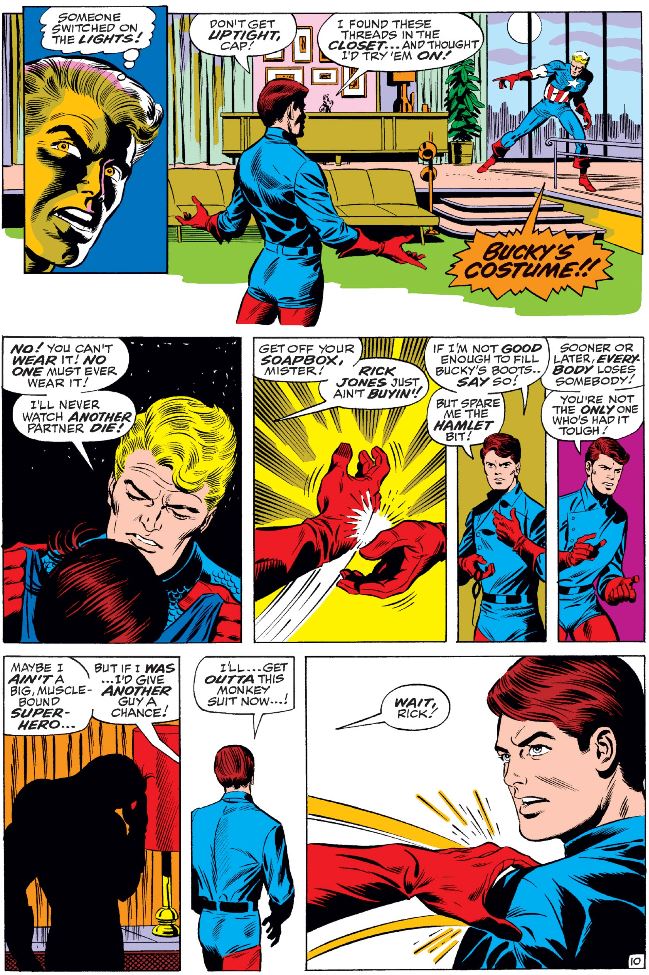 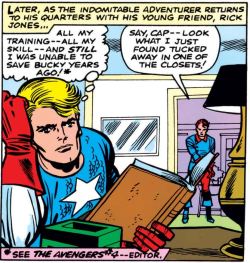 It would seem that Cap doesn’t remember when Rick did the same thing back in Avengers #7 (shown to the right), when he lost it and swore he’d never take a partner again. This time, however, he is more open to idea, perhaps to keep Rick close and safe. (In his text piece at the end of Marvel Masterworks, Captain America Volume Three, Steranko explains that he made Rick Cap’s new sidekick to try to put an end in the pervasive “Bucky guilt” that had characterized his stories since his revival.)

Cap and Rick do look good at the bottom of the next page, though! His thought bubble as they go down the manhole suggests he’s happy to have a partner again, despite his misgivings.

Even though he’d been training Rick since coming out of the ice—especially in judo, as seen below—when they’re fighting the hordes of Hydra, Cap is still protective…

…and his doubts return.

As Madame Hydra tries to kill Rick (luckily, not with a bullet), Cap saves him, and instead of chewing the lad out (as Rick expects), Cap praises him while clarifying the nature of their partnership.

(For fans of a certain caped crusader, this entire issue is very reminiscent of his early interactions with his young sidekicks, first hesitant to take them on, then joyous in their interaction, but always having to rein them in and explain that they have to follow his orders for their own safety and his.)