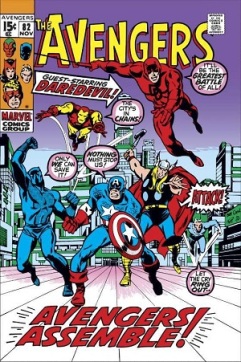 This three-part tale is very interesting, not for the actual story, but for the fact that it features a significant disagreement amongst the Avengers regarding their role as “Earth’s mightiest heroes.” (Plus, we’re introduced to Red Wolf and we see Daredevil, always a welcome sight at this blog.)

When we join our heroes, Iron Man is “reading their horoscopes,” so to speak (monitoring the members of the villainous Zodiac), and they’re ready to go after the threat too big for any hero to face alone, when one hero alone speaks… 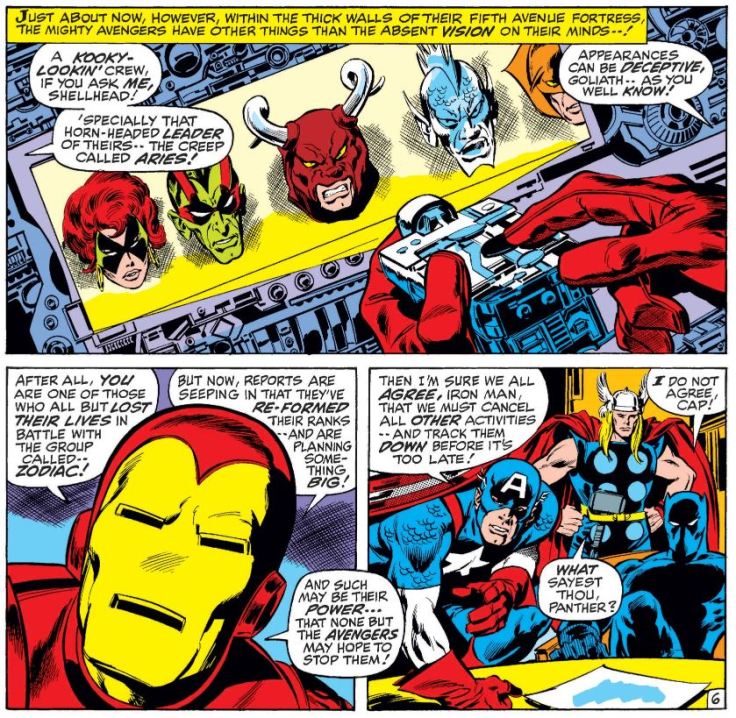 …and the divisions begin. 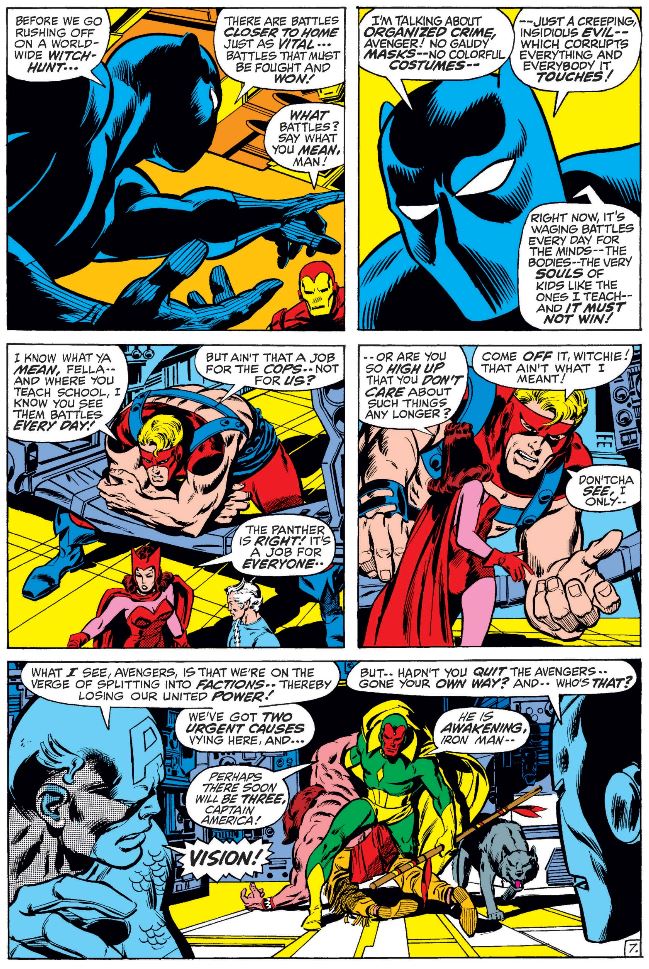 Hold on, Vizh, let me catch the people up. What we see here is a classic superhero quandary: Do you devote your effort solely to the world-shattering threats, the supervillain teams and alien invasions, or can you spare time and attention for the social ills closer to home? (We see this most famously in the “Hard Travelin’ Heroes” stories of Green Lantern and Green Arrow, which began just several months before our tale, with “man of the people” Oliver Queen taking high-and-mighty space cop Hal Jordan on a drive across America to see the racism, poverty, and general unrest happening at home.)

This also reflects the hard choices even the mightiest superheroes must make: where to devote their considerable energies, given that even they cannot be everywhere and help everyone at once. Clint, heaven help me, has a good point: the police can handle more down-to-earth issues like organized crime, whereas only the Avengers (or their superpowered pals) can handle more esoteric threats. The economists in the audience will know this principle as comparative advantage: even though the Avengers could tackle the smaller stuff, there would be a significant opportunity cost in terms of not saving the world from bigger threats, so it’s better to let the police handle what they can and let the Avengers do what only they can. Unfortunately, this logic doesn’t always sit so well with heroes, who want to save literally every one—every single person.

Now where were we… oh right, Vision brought Red Wolf home to meet the folks.

After Red Wolf explains his origin and tells them about the men trying to drive his people off their land—one of whom he was pursuing when Vision intervened—Vision pledges to help him. Iron Man, however, has a different idea… and the divisions widen.

This is such a fantastic page for Cap, as he emphasizes the need for all heroes to make up their own mind, using their own judgment, to decide which cause means more for them. He recognizes the importance of all three cases before them, but also realizes that many of his colleagues feel strongly for the “smaller” cases, even though their collective abilities may be better spent fighting the Zodiac. Accordingly, he also confronts the values of group unity and individual conviction, which conflict in this instance, and comes down on the side of conviction. (And the “you missed the point, son” is classic.) This shows that good people with the best of intentions can still have sincere disagreements about important principles—and that there is rarely one “right” answer to any significant moral dilemma.

At the end of the issue, Goliath, Scarlet Witch, and Vision leave with Red Wolf, while the rest remain. They all seem fairly understanding and confident in each other…

…but as issue #81 opens, they seem quite a bit more concerned about their collective future. 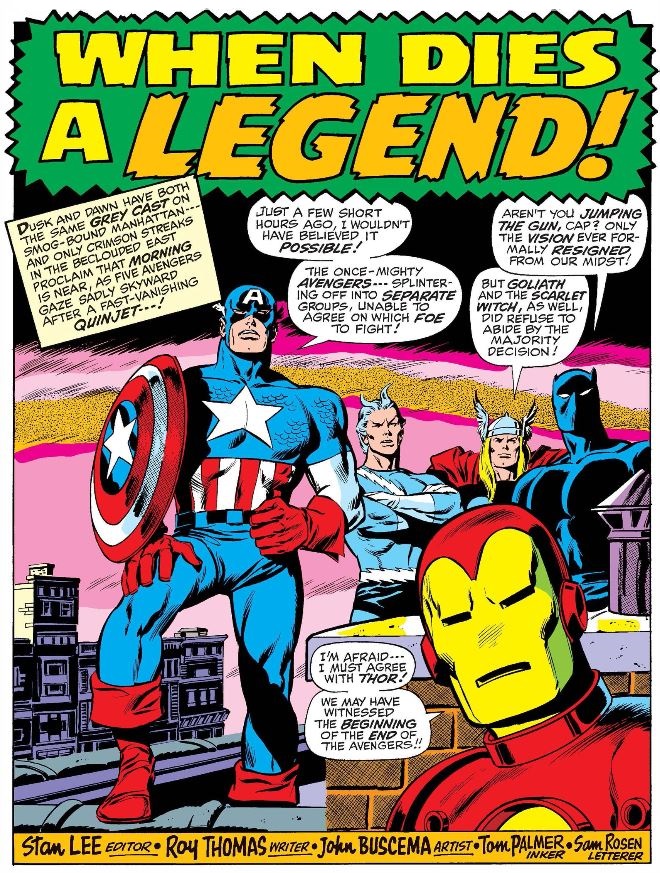 So much for “every hero must follow their conviction,” I guess, at least according to Iron Man and Thor—who above is preaching majority rules, but below changes his tune to agree with Cap’s focus on individual conscience after Black Panther reminds them of his responsibility to his students.

Above we see a clear—nay, a stark—contrast between Tony’s “we must band together to face the larger threat” and T’Challa’s “I must save even one child.” The Panther’s objective is noble, but to be fair, it does compromise the team when unified force is needed against Zodiac (who likely pose a threat to his students as well). Again, this is the hero’s struggle: can they just ignore the suffering at our feet to fight the larger threat in the sky?

Anyway, the rest of issue #81 features the three Avengers helped out Red Wolf, and issue #82 returns to the fight against Zodiac, which has gone south, with the other four Avengers held captive in an island of Manhattan cut off from the rest of the world by a force-field—which keeps the Fantastic Four (returning from upstate New York) and Spider-Man (at his Aunt May’s in Queens) out, but luckily the Black Panther is still in town, and he calls on his friend (and ours), Daredevil, and together they free the Avengers and defeat Zodiac. (It is a bit more exciting when you read the comic, of course.)

In the end, all of the Avengers (and Daredevil) gather in Avengers Mansion, and realize that all three of their cases were connected. So in a way, they didn’t split after all! (Whew, that was a close one.)

And Daredevil gets the last word with a parable that only T’Challa (who knows DD’s true identity) grasps fully. 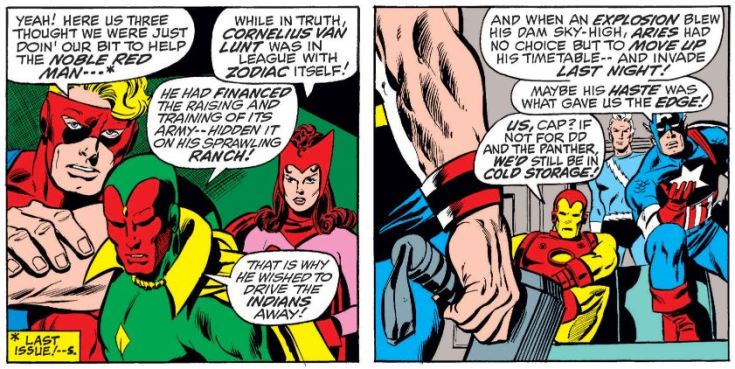 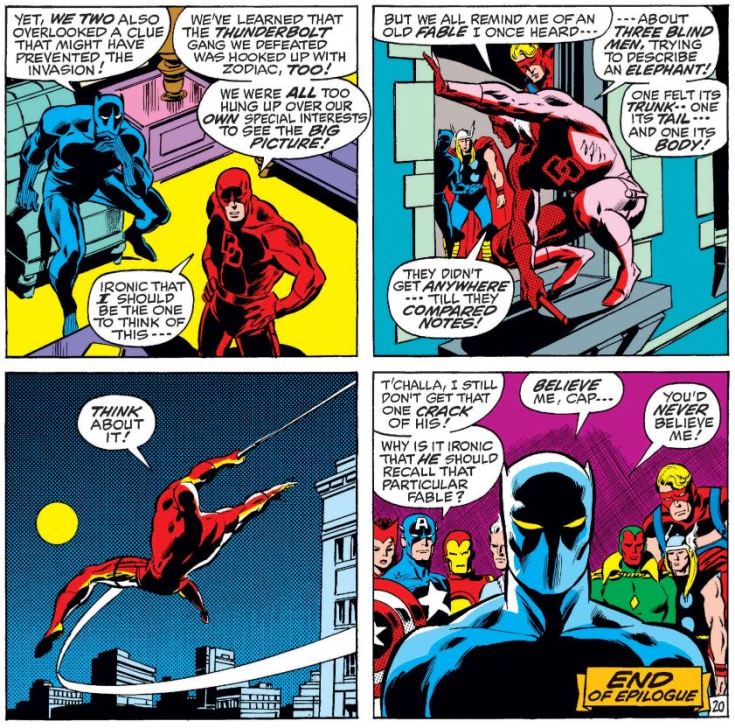 I like to think the Panther has a wicked smirk under his mask in that last panel.