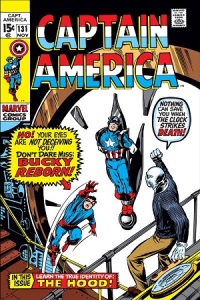 Well, the cover really spoils it, doesn’t it? In this issue, James Buchanan “Bucky” Barnes is apparently “reborn,” decades before he was reborn (for real) as the Winter Soldier to the manic glee of shippers everywhere. Plus, we “learn the true identity of the Hood” (not Parker Robbins, the modern Hood), a mystery that has plagued us ever since… the last issue (and only leads to other continuity mysteries, as we’ll see below). But more important… Bucky’s back? Gee, how’s Cap gonna take that, I wonder…

The issue begins with three pages of the Hood cackling over his evil plan to trap and kill Captain America by luring him with his old chum Bucky, and sets out to find a suitable young man to play the role. In the meantime, Cap is loving life for the first time in quite a while.

He seems to be in the same mood as in the last issue, deciding—for time being, at least—to ditch the responsibilities of being the Sentinel of Liberty and, instead, carpe diem. The fact that he’s still in costume, however, belies this carefree attitude, and reminds us that, like the last issue again, Cap will step into action at the first sign he’s needed. (And if he wants to blow off a little steam and practice a little motorcycle gymnastics in the meantime, far be it for us to criticize.)

It seems the Hood has found his perfect Bucky replacement… but could he be too perfect? 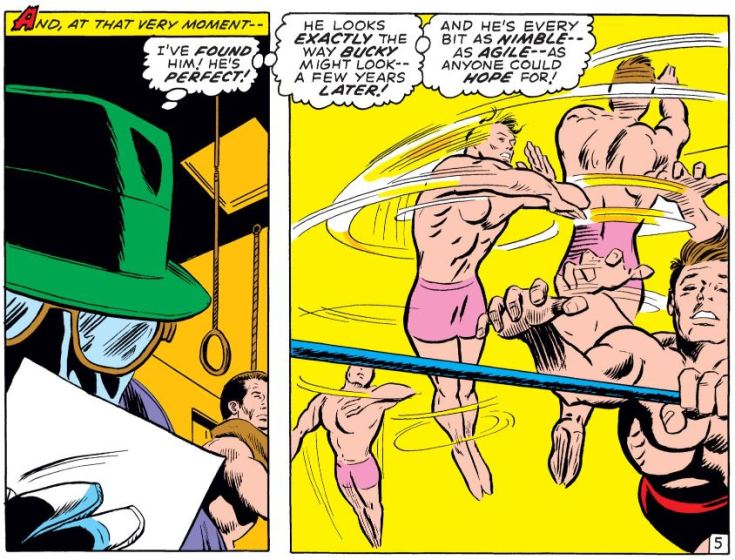 The Hood must have a great PR firm at his disposal, because before long, while Cap is taking in the San Francisco sights and enjoying a cup o’ joe, word reaches him by wireless.

Apparently Cap turns into an eight-year-old boy when he hears astonishing news.

Of course, Cap is not naive enough to believe the news wholeheartedly, but anyone can understand his need to investigate. 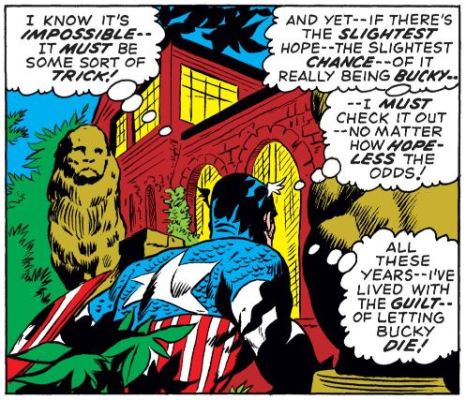 Before he finds Bucky, though, he finds the man under the hood… 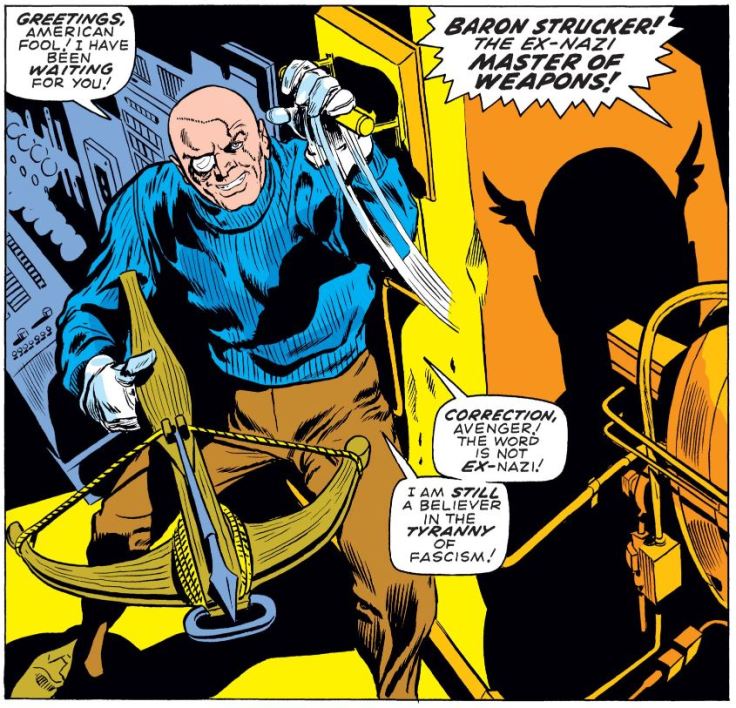 Yes, it’s Baron Wolfgang von Strucker, infamous enemy of Captain America and the Invaders in World War II and Nick Fury and SHIELD in the 1960s, who also happened to die in Strange Tales #158 (July 1967). (Oops.) This isn’t explained for ten years, until we learn in Captain America #247 (July 1980) that this Strucker was actually a robot created by Machinesmith. (Robo-Strucker even has his own entry at the Marvel Database.)

Oh yeah, there’s a kid wot looks like Bucky there too, whom Strucker (we’ll drop the “Robo” for now) has brainwashed into thinking he’s the real Bucky Barnes (or at least says so a lot). 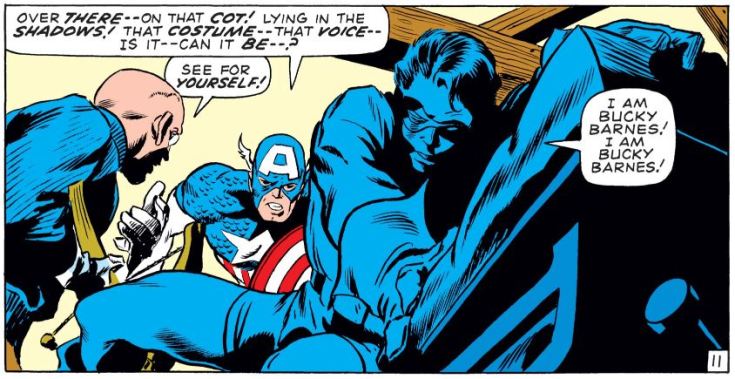 As we see below, Strucker has a lot of issues: not just a passion for fascism, like many of Cap’s foes (especially those dating from World War II), but also resentment for Cap’s fame and “so-called skill.” (I guess someone’s mad that “weapons master” never really worked on the dating scene.) 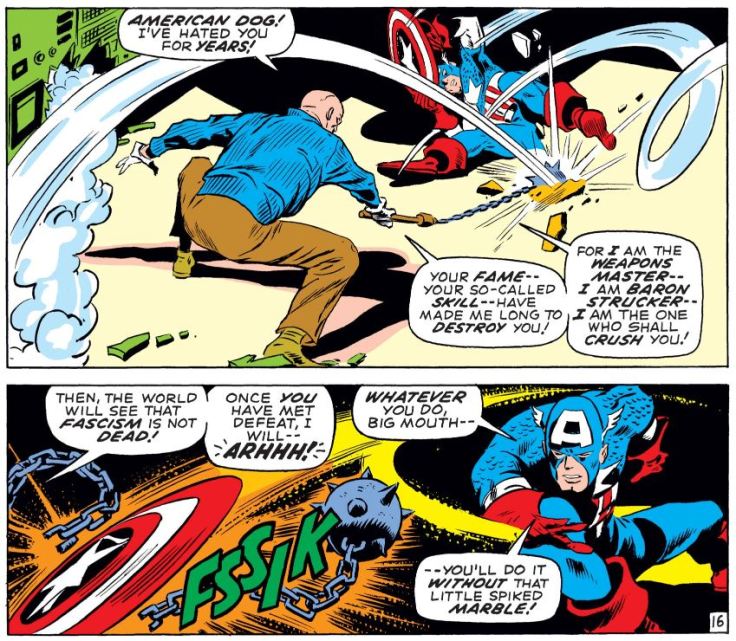 Cap gets a chance to give his line about not needing a weapon (while he holds his mighty shield). 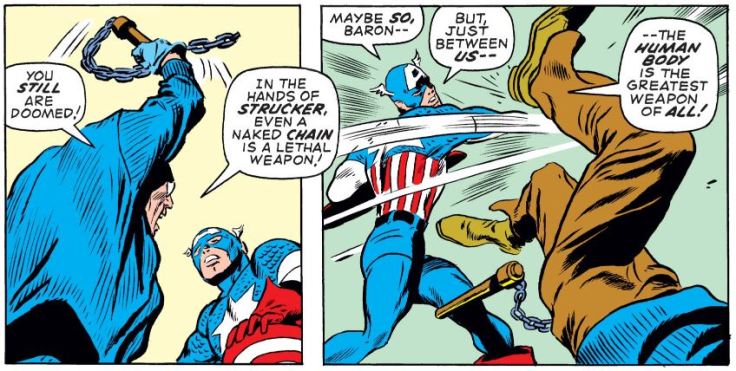 At his first chance, Cap turns to “Bucky,” and it certainly seems as though both are considering the possibility that he’s the real thing. 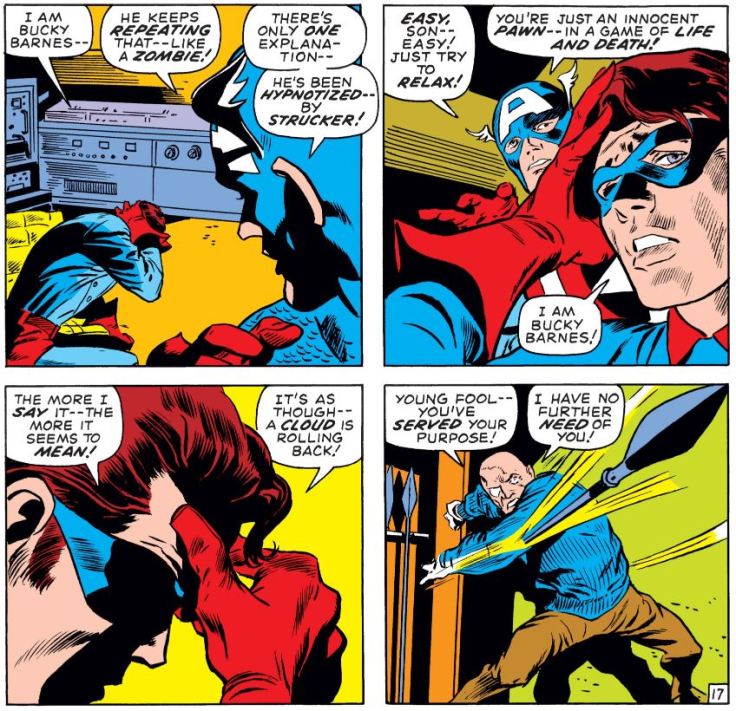 Yep, that shield sure comes in handy. 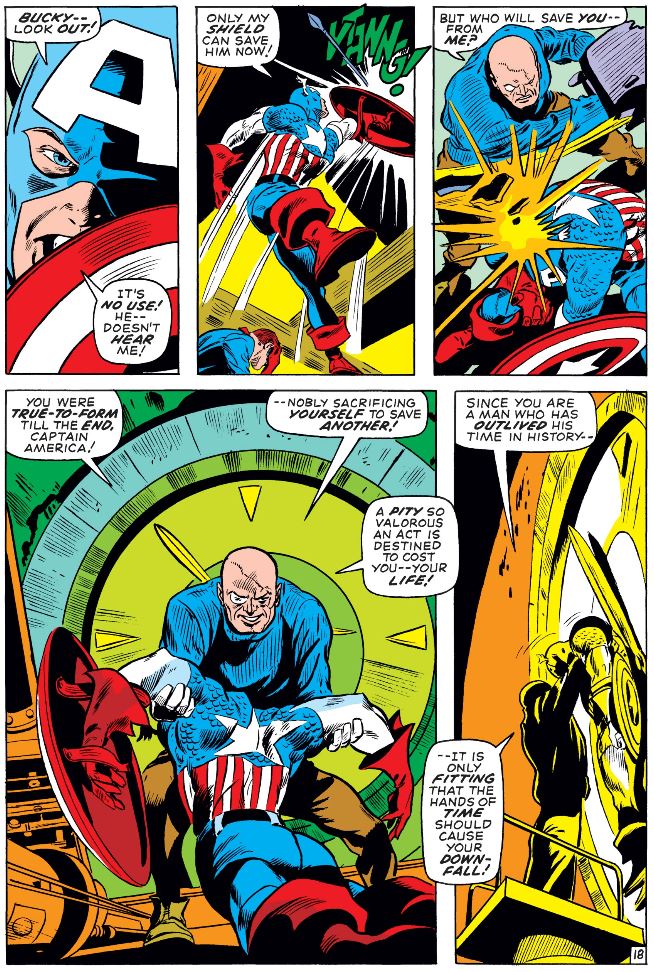 At least Strucker acknowledges Cap’s virtues of heroism and sacrifice, even if he doesn’t admire them. And while he lives through a cliffhanger straight from the 1960s Batman TV show—”How will Cap escape this timely trap? Or has his bell finally rung? Tune in next week, same Cap-time, same Cap-channel!”—Cap is more concerned about dying at the hands of a Nazi than death itself. This makes sense: as a hero, Cap likely wants to go out saving a life, not being defeated by an enemy, especially one so ideologically opposed to himself.

But one final surprise: Bucky springs into action, just like… old days?

Is this the real Bucky? Cap seems to be coming around to the possibility. Are you? Tune in next post, same Cap-blog, by the same Cap-blogger!