Fresh from their crossover in the recent Avengers and Fantastic Four annuals, the two teams meet once again in their regular titles in a story that—no surprise, given the FF cover—reintroduces Jean Grey, who seemed to perish during the “Dark Phoenix Saga,” and in turn leads into the first X-Factor series, starring the reunited original five X-Men.

In Avengers #263, the team’s National Security Council liaison, Raymond Sikorsky, chimes in on their newest member, invited to join in the last issue.

Cap argues the benefits of improving relations with the monarch of an undersea kingdom, and vouches for his eligibility on legal grounds, while the Wasp takes a more defiant approach before deferring to Cap’s reputation. (The Black Knight is impressed with his team leader all the same.)

Soon thereafter, Captain Marvel helps investigate a mysterious plane submerged in Jamaica Bay near JFK Airport, where she finds a mysterious “cocoon” and is soon joined by the rest of Avengers…

…including their resident sketch artist, who renders the object well enough to recognize it and its ties to Marvel history.

Of course, one of the team has a certain affinity for the water, and takes it upon himself to check things out, against the wishes of leadership. Black Knight has the Wasp’s back, of course, but Cap once again defends his fellow former Invader.

“Language!” I imagine Cap saying (while scratching his head trying to figure out exactly what Namor said… but he figures it was really bad!).

But seriously, Janet and Cap make sure Namor appreciates what happened.

Anyway, the team finally manages to get the object back to Avengers Mansion and cleaned up, and once left alone, it reveals its secrets. 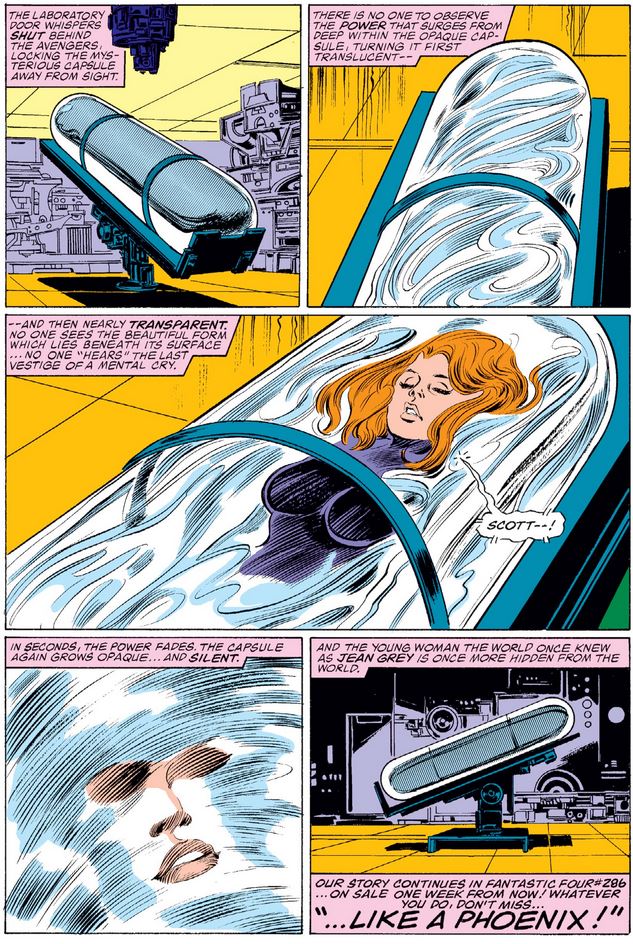 The story continues in Fantastic Four #286, where we meet the titular team rushing to examine the object (and showing that Cap is not the only New York hero who insists on paying his own way). 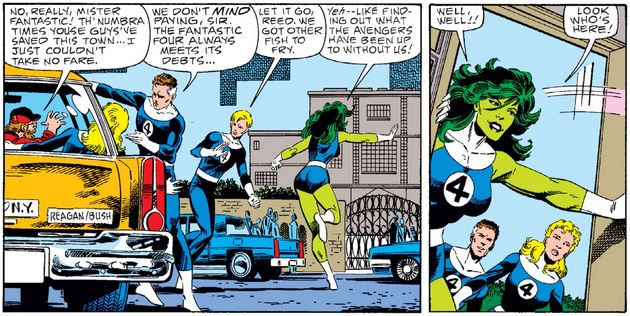 Cap and Hercules greet their old friends (including one former teammate) in their own particular ways before Cap brings Reed up to speed. 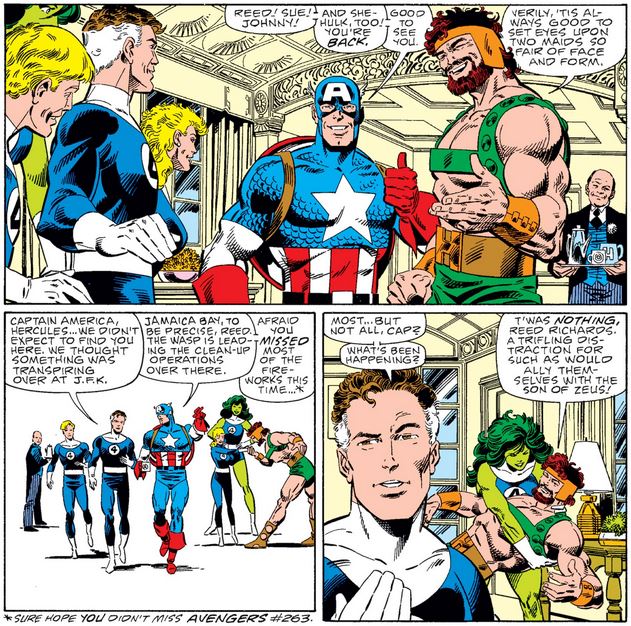 Someone forgot to put the “DO NOT TOUCH” sign up, because… Reed, he touched.

So naturally, he has to Reedsplain to his wife how her powers work. 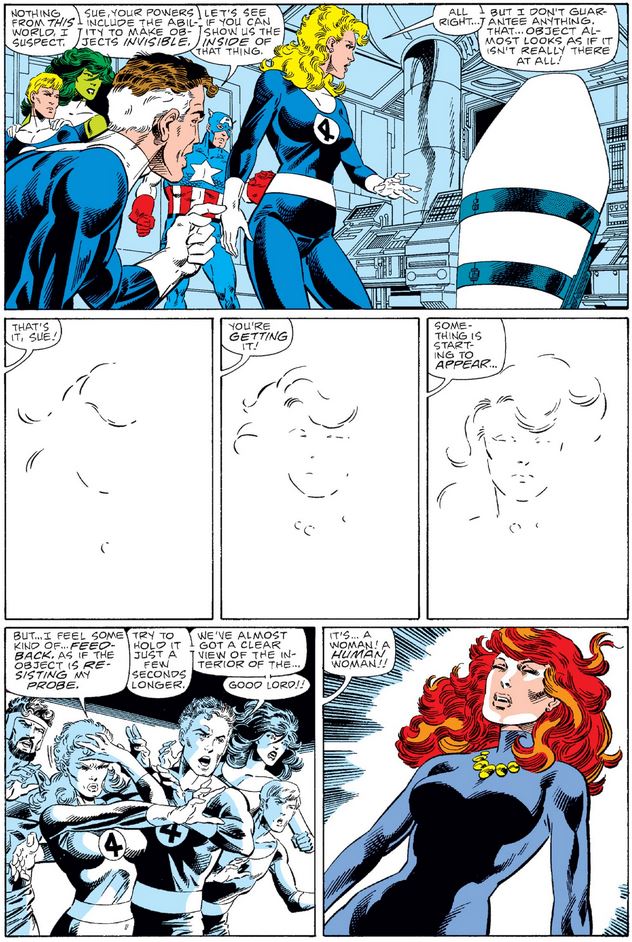 Reed and His Amazing Friends continue to poke and prod the object, although Reed seems more concerned about fair labor practices in Avengers Mansion…

…until gravity suddenly seems to go haywire, and a beautiful butterfly emerges from her cocoon (hair perfectly styled). 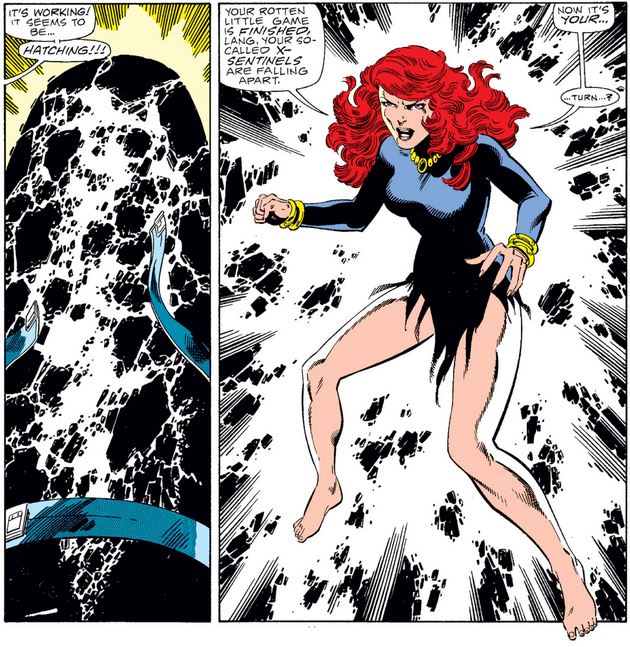 Unfortunately, she’s as confused and disoriented as everyone else—although the fellas all seem to be taking the current zero-g environment in stride. (Cap and Hercules just look bored.)

Again, it’s Sue to the rescue, using her forcefield to cut off Jean’s powers… but without warning the boys first. (Of course, Cap is only concerned about Jarvis, especially after Reed filed a complaint with the labor authorities.)

Finally, Jean mentions her own team, and there is a collective ohhhhh in the room.

Jean suggests the person who can most obviously help here, but the other heroes have reservations: They still remember the first Secret Wars, during which the X-Men held a temporary truce with Magneto, which goes on to become an increasingly ambiguous relationship between them for many years to come (as shown in all 37 X-Men movies).

Well, to be fair, hasn’t everybody in superhero comics at one point or another?

After several of the heroes take Jean to her parents’ house to try to get more answers, Cap uses the Avengers computers to look more clues and remembers another friend of the mutant persuasion, all while giving a young Ms. Germanotta an idea for a hit song.

Cap watches the Beast’s YouTube video about Jean Grey and the Phoenix, which Cap takes in stride, although it only further confuses the matter.

Most of the rest of the issue is a looong “explanation” of how, years ago, the Phoenix Force took Jean’s place, rather then possessing her, so it wasn’t Jean who sacrificed herself at the end of “The Dark Phoenix Saga” (an act I wrote about in my chapter in X-Men and Philosophy, edited by Rebecca Housel and J. Jeremy Wisnewski). Instead, Jean remained in suspended animation, recovering from the incident during which the Phoenix took her place, until re-emerging this very issue.

Jean and the rest of our cast are close to figuring this out when Cap arrives with the final piece—in very dramatic fashion, like a detective teasing a dinner party with the truth about who the real killer is. 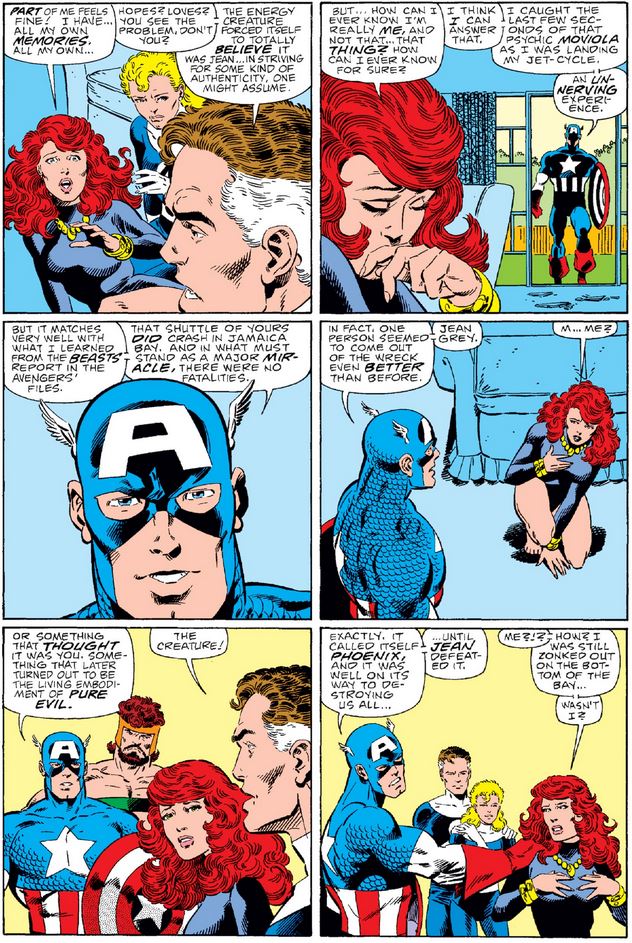 Reed feels left out, so he interjects, but Cap just keeps going like nobody else is there, telling Jean how her decency and heroism helped defeat the Phoenix from the inside.

It’s just like Cap to remind someone else of their innate goodness, and he excels at it here, setting Jean on the road to becoming a hero once again with her fellow original X-Men in the new team X-Factor.