This issue brings Captain America in contact with several more members of the Serpent Society—including one that he will get to know much better in later issues. It also lands him a new teen sidekick of sorts, one very much up-to-date with the computer lingo of 1986 (which the editors kindly explain).

After a few pages showing us two members of the Serpent Squad trying and failing to capture MODOK, Cap gets an update on his new hotline venture (launched in the last issue) from his fiancée Bernie…

…who points out a practical difficulty from the popularity of his endeavor, even if they use the best voice recognition technology of the day (courtesy of Victor Zue).

As she points out below, Bernie did warn him about this last time, and refuses to be his unpaid intern (especially with law school looming). But I don’t think she warned him about hackers. 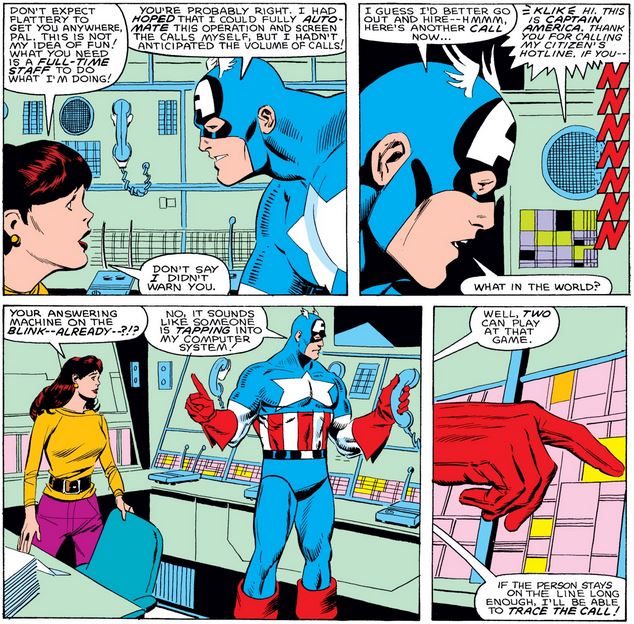 Ah, the glory of dial-up!

Of course, any nefarious activity can ultimately be traced to New Jersey. <eye roll> After interrupting her song, Cap politely asks the woman to see her computer, which belongs to her son…

Or Ram… get it, ha ha, he should team up with Rom for wacky computer adventures.

As it turns out, Hiram is not just a fan of computers.

Hiram smoothly glosses over his hacking to tell Cap about the message board/chat room/AlterNet site dedicated to him and his adventures.

Yes, hackers are just computer enthusiasts… I think someone hacked the footnotes to this issue!

We learn what a modem is before Cap starts to lecture Hiram on what he and his fellow computer enthusiasts did wrong… but sorry, I got stuck on the idea of what Cap’s password is. Possibilities: AVENGERSASSEMBLE, IMISSTHE1940S, or TONYSUCHALOSER. (Get together with your friends and make up your own!) 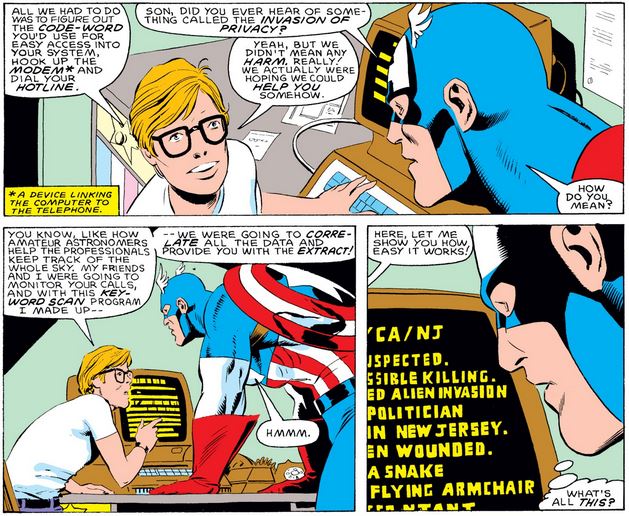 Of course, Hiram and his fellow computer enthusiasts show that they unwittingly solved the problem Bernie pointed out to Cap earlier, but before Cap can address that, he has to investigate an incident Hiram’s program discovered. Because it’s in New Jersey, chances are the problem is at a mall—and because it’s New Jersey, a mall is never more than five minutes away.

Cap apprehends the Serpent, who explains the Society’s goal to kill MODOK as well as her own reticence to join the fight herself.

Cap exercises judgment, deciding that investigating the larger situation is more important than  keeping Princess Python is custody, and lets her go… unaware of her silent gloating. (Not that her “charms” affected Cap’s decision, though, as far as I can tell.)

Cap visits the nerve center of the Newbury Mall, where Mr. Friedman is obviously the Marvel Universe version of Ozymandias from Watchmen.

After Cap spots a familiar member of the Serpent Society, he has to convince Friedman—or “Freedman,” who even knows—to close down the mall by pointing out that it’s in his interest to do so. (Good thing he didn’t suggest a giant squid to scare the customers away.)

Cap again uses his judgment, deciding that the urgency of the situation and the uncertainty of the number of foes outweighs his discomfort with “ambushes,” which here apparently means hitting a villain when they least expect it.

These two examples show that moral judgment is not necessary just in a life-or-death “tragic dilemmas,” but in any case in which valued principles come into conflict.

Soon, Cap engages with more Society members, and meets Diamondback (aka Rachel Leighton) for the very first time, but definitely not the last. 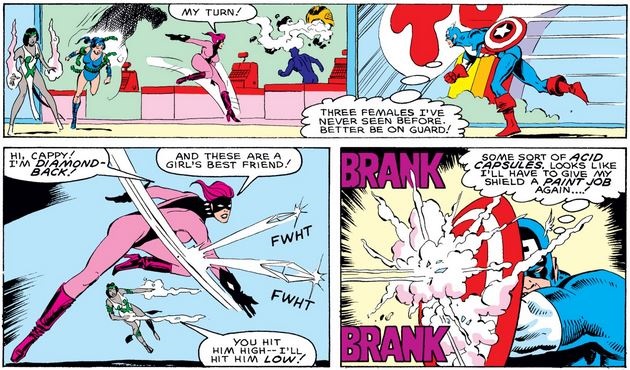 Another Serpent, Mamba, uses her power over the Darkforce to create an illusion of Bernie (although I have no idea how Mamba knew who Bernie was), and Cap is strangely captivated by it while completely aware that it isn’t real.

Below we see the first hint of Diamondback’s attraction to Cap, and her slight hesitation gives our hero the opportunity he needs (while gallantly apologizing to his attackers for “the roughhouse”).

…and he unhesitatingly goes to the rescue, though he is regrettably too late. He acknowledges that not even criminals deserve that treatment, and promises to bring his killers to justice (as MODOK should have been).

(MODOK will return, have no fear. You just can’t keep a good mechanized organism designed only for killing down!)

Afterwards, Cap gives his #1 fan in New Jersey (at the time) a personal update on his adventure, and then suggests a way to solve his hotline problems and stop Hiram and his pals from hacking his system. 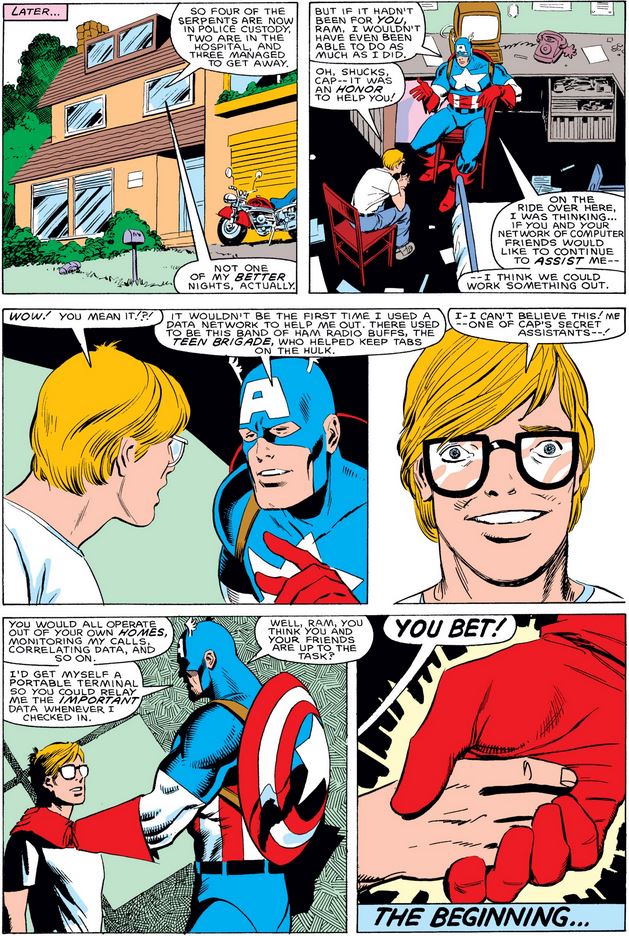 Is he going to pay them, or is this a way to swap free child labor for Bernie’s? (Given Cap’s well-known insistence on paying his way in taxis and buses, I would assume he is compensating his new “Teen Brigade,” but it would be nice to know for sure!)