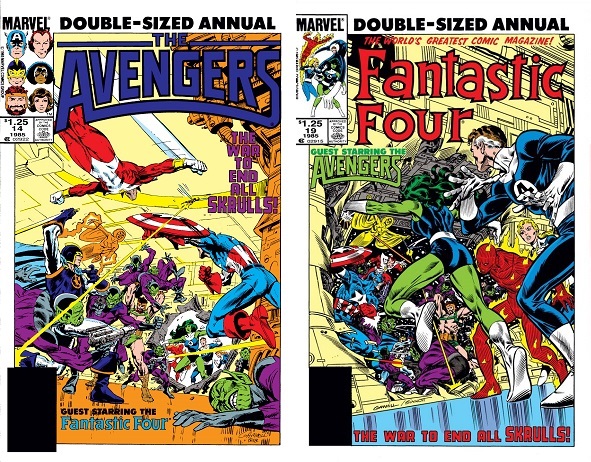 These two annuals represent a unique experiment on the part of writers Roger Stern and John Byrne (who also handles pencils or breakdowns): They represent two separate stories that intersect in the third act, at which the issues cover the same events from each team’s point of view, with several panels and pages effectively duplicated in both issues. (In fact, the covers above replicate the first scene of this crossover from the comics.) Most of the panels we’ll discuss are from the Avengers annual, of course, with panels from the Fantastic Four annual presented afterwards just to show some of the similarities.

Unlike most recent Avengers annuals, which were self-contained stories outside the narrative flow of the regular issues, this one fits storywise between Avengers #260 and Avengers #261. As such, this one features a recap half-page with the Avengers standing with one of the Skrulls they stood beside while fighting Nebula… 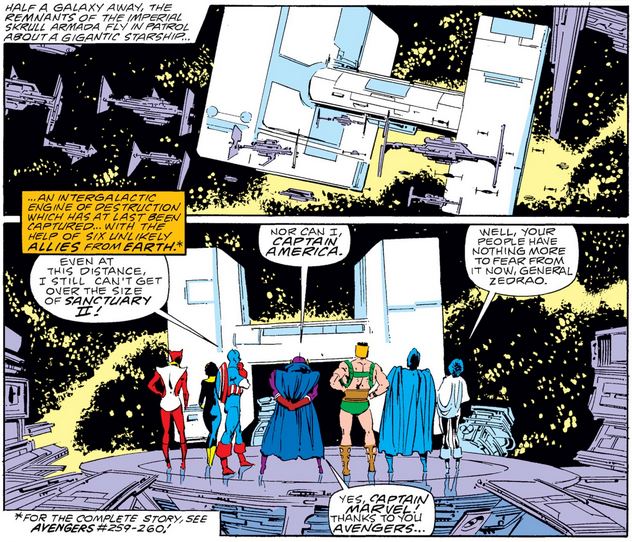 …and when Starfox declares his intent to find her (after she was abducted by the Beyonder), the Skrull offers to take them to their imperial power asteroid, which has the means to track her. Starfox is keen to go, of course, but Cap reminds him who the team leader is.

On their way there, the team runs into a ship carrying the members of the Skrull colony of Kral, who pattern their lives—and appearances—on the America of the 1930s. Exhibit A: The Humphrey Bogart lookalike below. 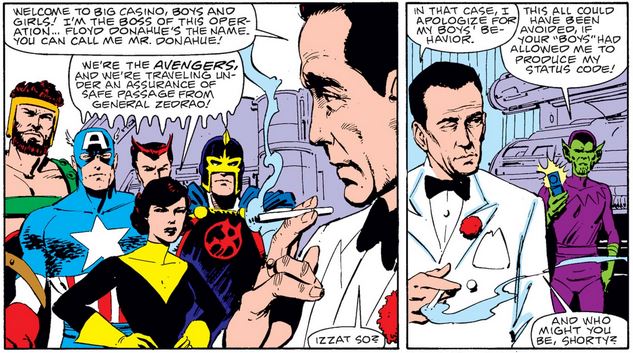 Exhibit B: The casino, the authenticity of which Cap vouches for. (Although I wonder how a poor boy in New York at the time would have seen places like this.) 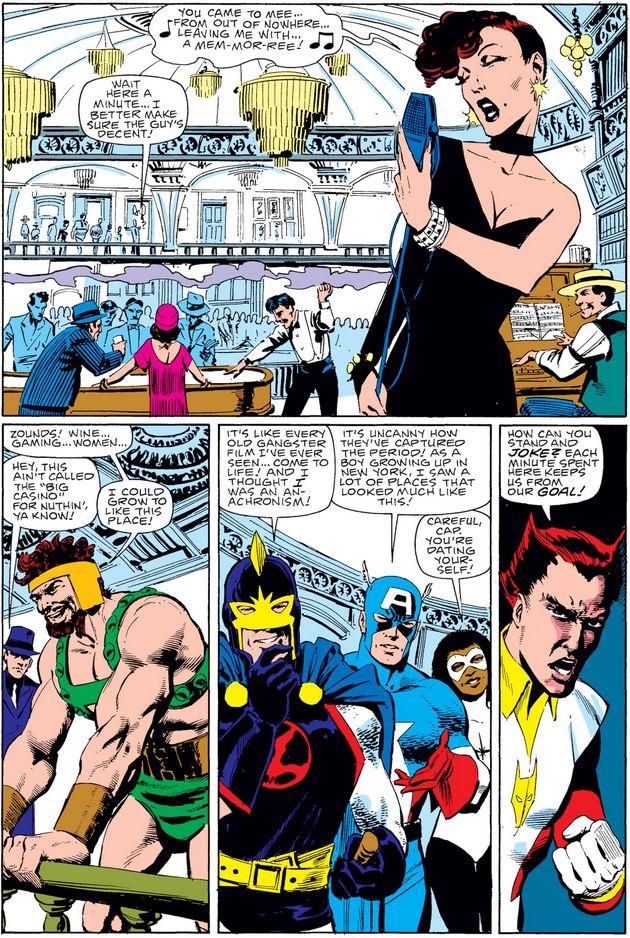 Soon they learn of a Skrull madman who has taken over the power asteroid, and when Starfox gets ahead of himself again, Cap has to step in (again) to remind him who’s boss. 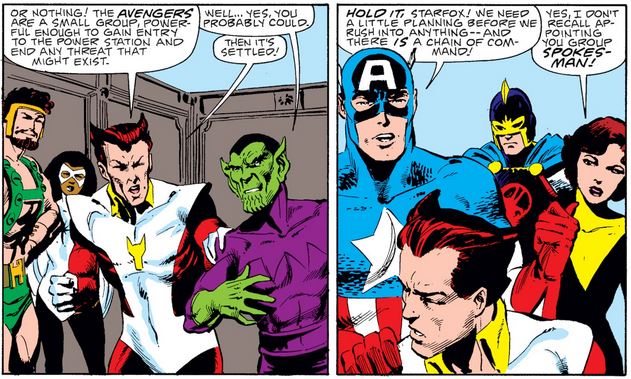 To his credit, Starfox apologizes, which the Wasp accepts, and Cap endorses his plan.

Next thing we know, an envoy from Kral lands on the Skrull power asteroid, but a few of them look mighty familiar…

…which is confirmed after they blow their covers. (Look at Cap, casually throwing a punch while dressed like a real solid sender.) 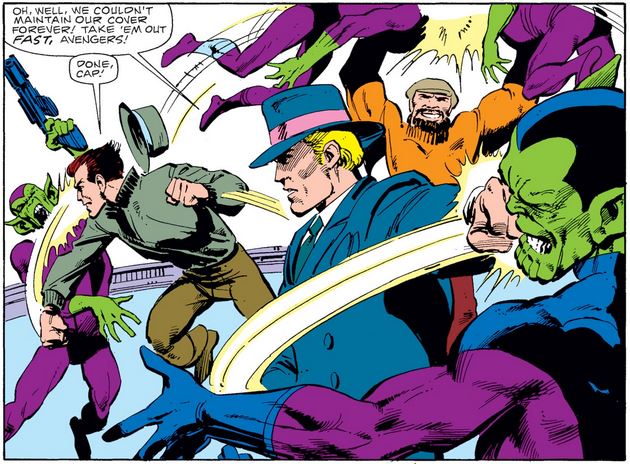 As they start searching the asteroid, they’re surprised to see an old friend…

…but, above, Cap looks like he has his suspicions, where are confirmed below.

…and then turns to meet the next green-skinned threat, but she ain’t no Skrull.

Or is she? Can’t be too careful these days. 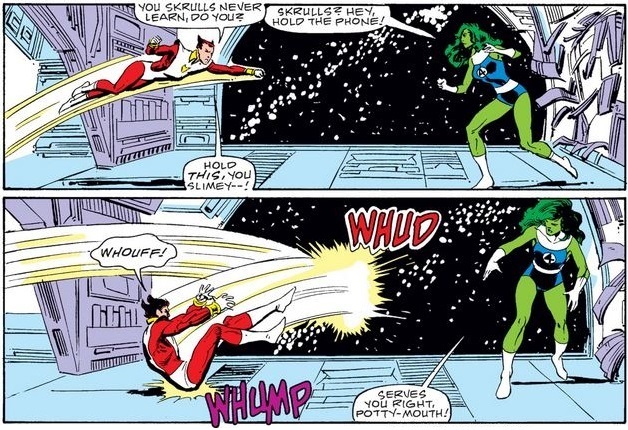 Hmm, I suspect that she’s not the only Fantastic Four member here… and they’re not sure these Avengers aren’t Skrulls either.

So Cap plays the same trick he used to out the Skrull-Thor, after which he and Reed demonstrate a responsible, socially-distanced greeting.

When all is said and done, the big bad Skrull sets off a device that negates every Skrull’s shape-shifting abilities, freezing them in whatever form they were in when the device went off. (This does not last long.) When one of the less bad Skrulls wonders how Skrull society will survive when everyone looks different from each other, Cap sees a chance to pontificate—rather idealistically, of course—about America’s belief in moral equality despite physical differences, and the political benefits of diversity. 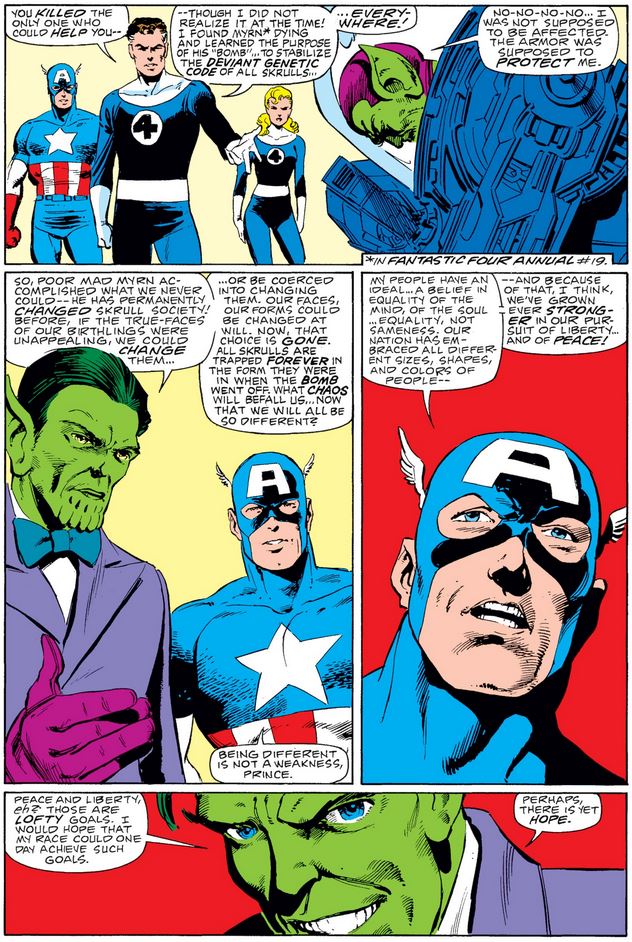 I feel the same about humanity, pal.

The Skrull above is Prince Dezan, who is regarded as the most dangerous Skrull alive. When Captain Marvel wonders why, given how thoughtful he was, Cap explains what it means in a war-like society to be considered dangerous.

Gee, it seems we’ve had more than a few “outcasts” like that here too, who were ostracized (or worse) for preaching peace and equality. But I digress…

In Fantastic Four Annual #19, we see how that team gets to the Skrull power asteroid through their own adventure, and eventually how She-Hulk bursts in on the Avengers from the FF’s point of view. 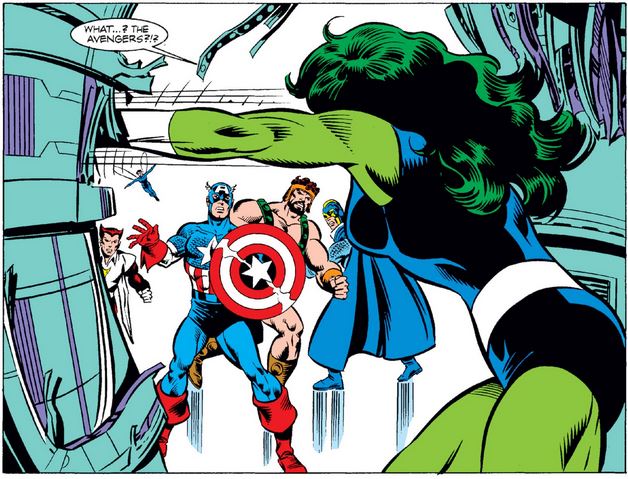 The rest of the crossover pages are nearly duplicated, being from a third-party point of view, including the page below… 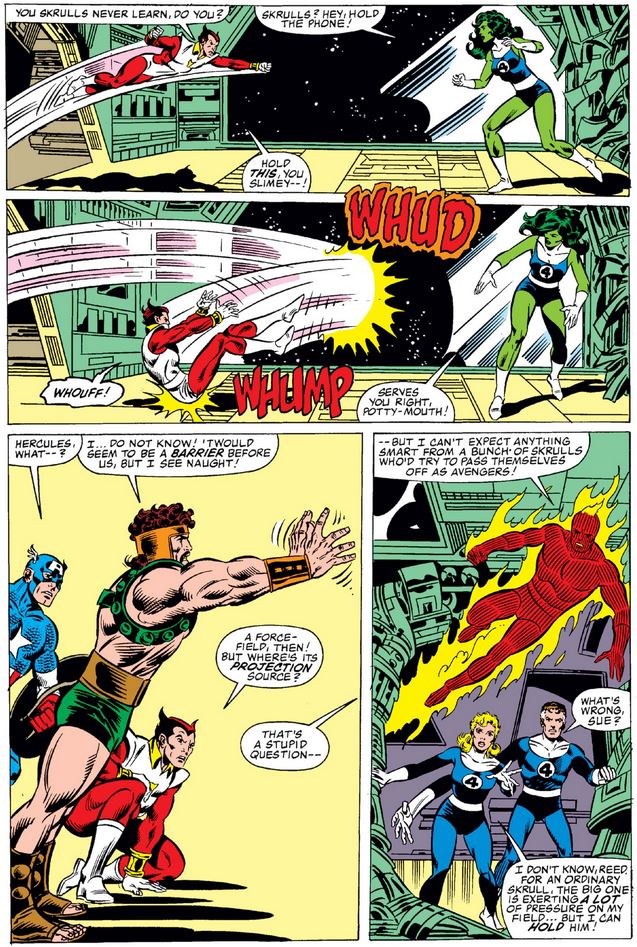 …until the FF’s adventure ends with their own coda, in which they unknowingly build on the Avengers’ discussion of Dezan, hoping that he can pacify the Skrull race.