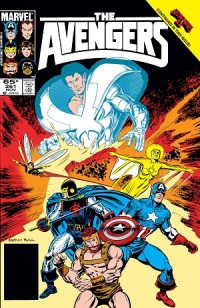 This issue of Avengers is both the aftermath of their recent adventures with the Skrulls in issues #259-260 and the recent Avengers and Fantastic Four annuals, as well as the title’s second Secret Wars II crossover, a more substantial encounter with the Beyonder than his sudden surprise appearance in the first (issue #260). This is followed by the team’s own brief appearance in Secret Wars II #5 and a few panels from Amazing Spider-Man #270, corresponding to Spidey’s appearance in Avengers #258 back in August.

In Avengers #261, the team celebrates their recent victories with the Skrulls and prepare to return to Earth, with Cap paying respect to the Skrull general, signifying the possibility of a new relationship between Skrulls and humans. 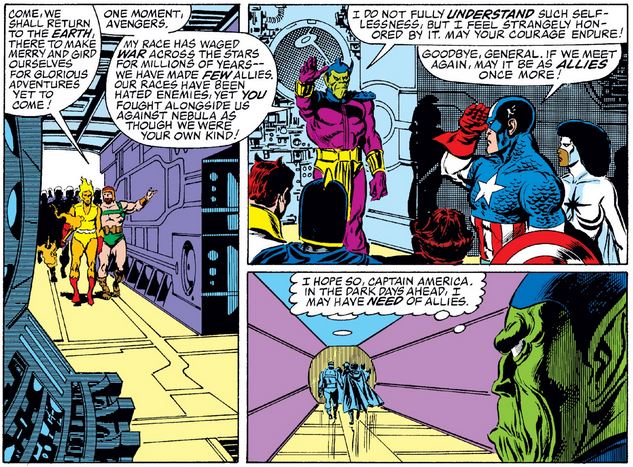 During their return trip, Starfox announces his departure from the team to pursue Nebula, and once back on Earth, Captain Marvel leaves to see her family, leaving just four Avengers to receive Jarvis’s troublesome story of the Beyonder’s visit (from Secret Wars II #3) that led him to visit the Avengers’ fight against Nebula in Avengers #260. 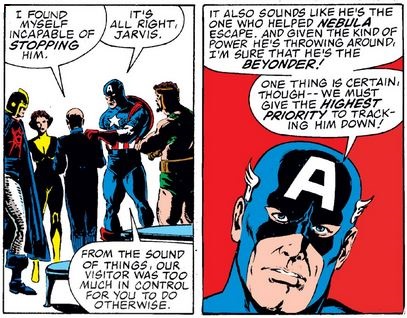 As powerful as the Beyonder is, Jarvis wisely recognizes that government bureaucracy may represent a even greater ongoing threat to the Earth’s Mightiest Heroes.

So Cap and the Wasp have to go to Washington and meet with the Federal Aviation Administration, who have fallen in line with the United States government’s current disfavor with the Avengers (since issue #255). Cap tries to explain the global emergency the Beyonder currently presents… 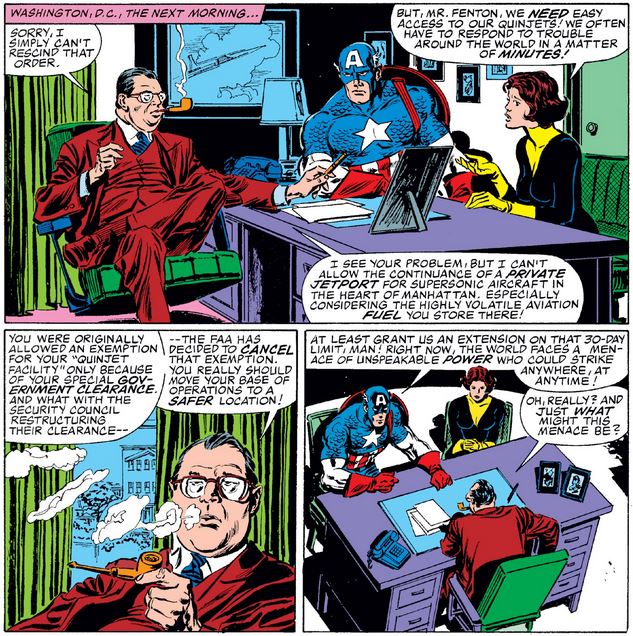 …but why not let the all-powerful being speak for himself. 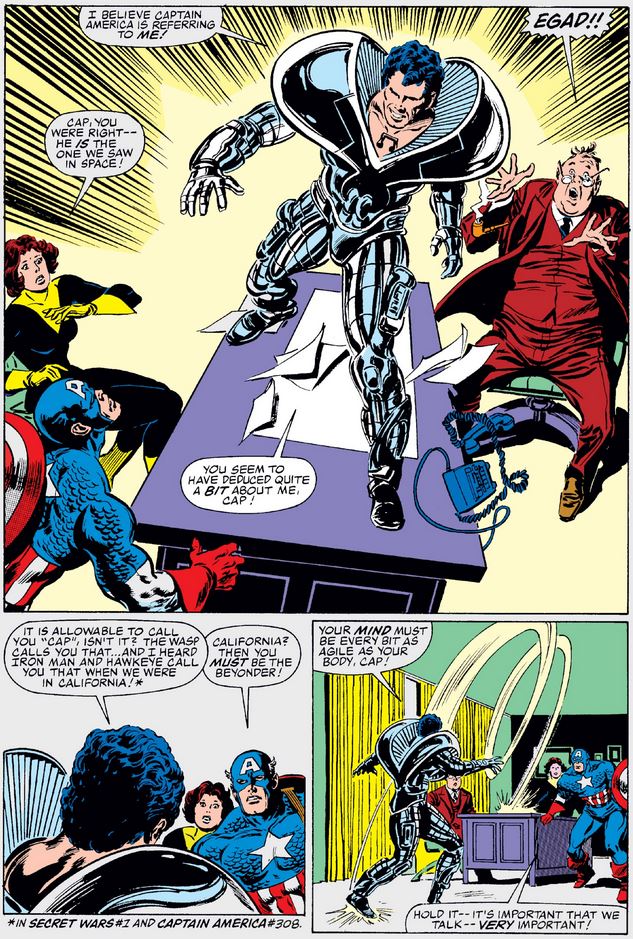 Keep in mind that this is the first time Cap and the Wasp have seen the Beyonder, who remained behind the scenes in the original Secret Wars series, adopting human form only when he came in Earth for the sequel, going through several forms before settling on Cap himself, with a later hairstyle change (in Secret Wars II #3) to look like superstar Mac Davis.

The Beyonder tells Cap and the Wasp that they’re “it” and takes off, and the way he glides down the escalator rail reminds Janet of Cap (who would never ever do such a thing). 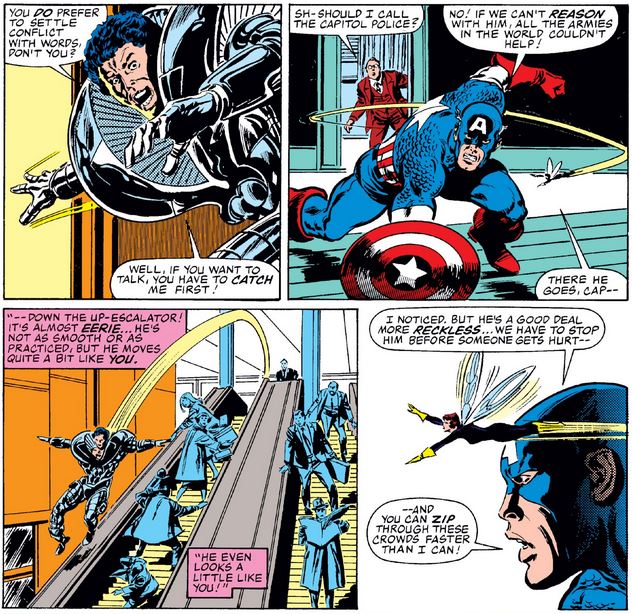 After toying more with Cap and Wasp, and then with Hercules and the Black Knight, the Beyonder appears in front of the collected Avengers (now including Captain Marvel), claiming that he just wants to help. So Janet makes him a surprising offer (and Cap gives her the benefit of the doubt about it). 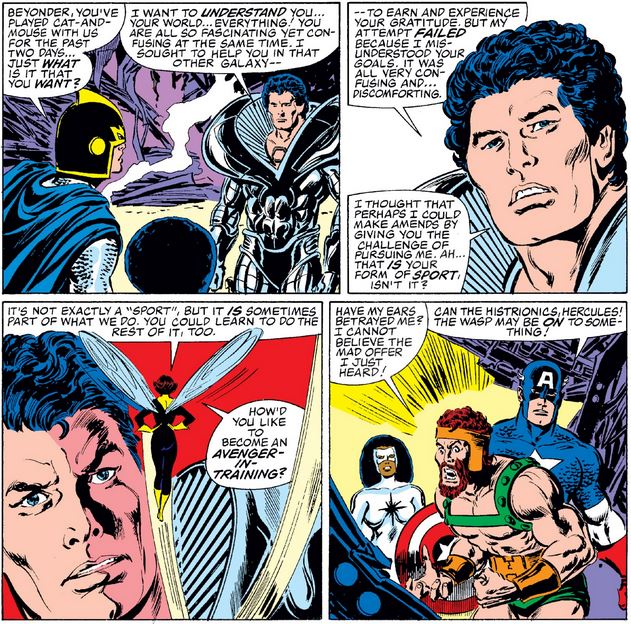 Cap turns into the most modest prosecutor ever—have some imagination, man!—while Captain Marvel makes a more pragmatic point, and the Wasp teaches the Beyonder the Code of the Avenger.

Meanwhile, the other four Avengers debate the possibility of helping the Beyonder become a better person… or god, whatever… while they wonder if they are capable of teaching wisdom to an all-powerful being. 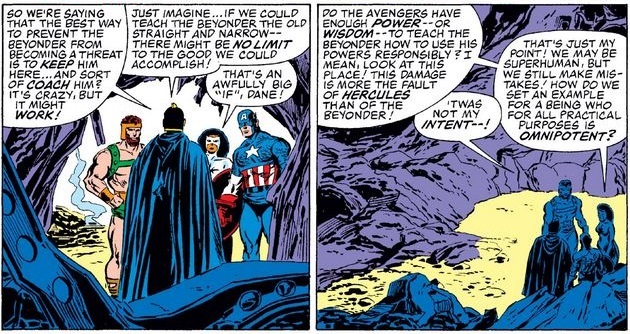 This is an interesting question, although omnipotence doesn’t mean perfection—we’ve already seen the Beyonder do some pretty questionable things. A better question is: Does omnipotence change the basic nature of right and wrong for the omnipotent being? Or does it just change the options one has to act on them? The Beyonder may have abilities… beyond… other beings (sorry), but he still has to use judgment to choose what to do with them, and the core elements of that judgment, based on whichever ethical system he decides to follow, are still the same. (These questions are somewhat tangential to the traditional philosophical and theological arguments regarding divine omnipotence, as you can see here, especially section 5.)

Or, as Cap concludes, it’s all we’ve got, and it looks like it falls to us to do it! 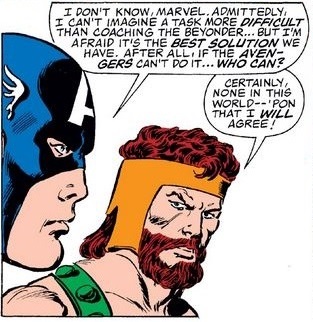 But the Beyonder declines, saying there’s so much more in the world he wants to see… so all the discussion was for naught. (Except ethical enlightenment, which is always good!)

Some time later, at the end of Secret Wars II #5, the mutant Boom-Boom (in her first appearance) meets the Beyonder and, once aware of the threat he poses, contacts the Avengers, setting him up for an ambush (after blowing him up a little). 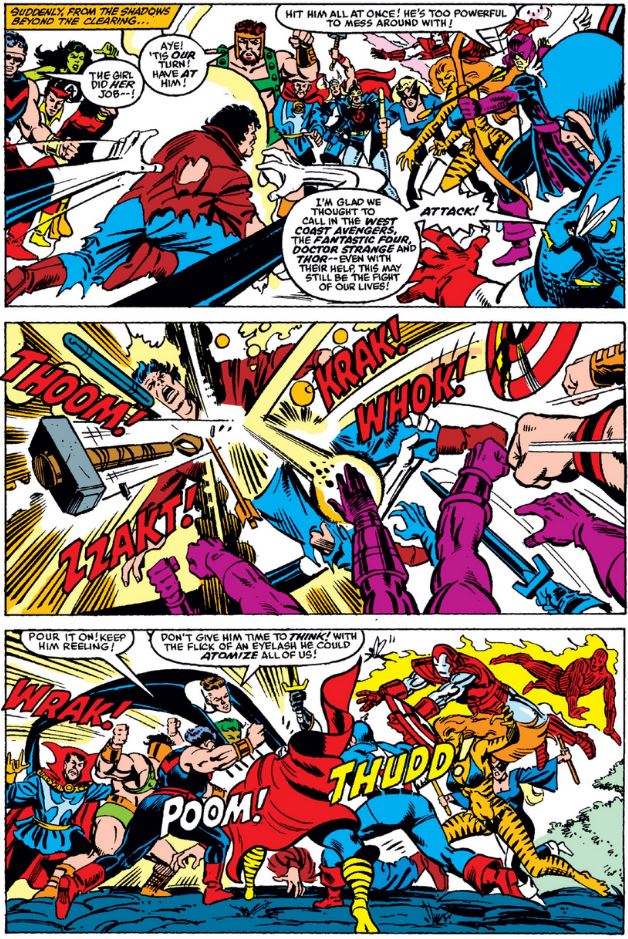 The what of an eyelash, Reed? Oh, flick, right, got it. (See also: early printings of Hawkeye’s first name.)

Suddenly Cap calls everyone off, uncomfortable beating up on someone who isn’t fighting back, even if he is all-powerful. While Hawkeye and Wonder Man rehash the same argument their teammates rehearsed above, Cap tells the Beyonder to “get lost, man!” 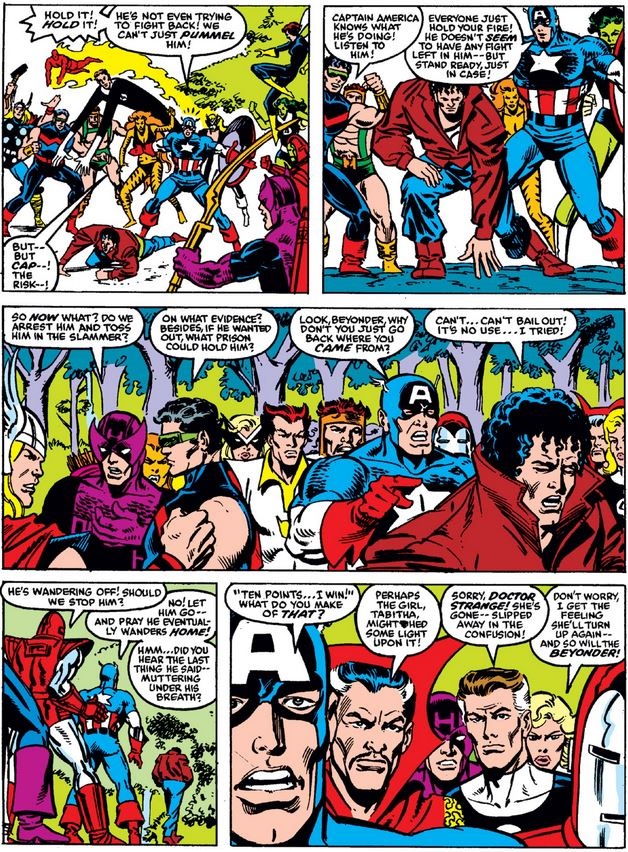 Well, there are four more issues, so I’d say that’s a pretty good bet, Tony. (Note: The part of Iron Man is once again being played by Tony Stark, after the events of Iron Man #200, albeit in the atrocious Silver Centurion armor.)

Finally, in Amazing Spider-Man #270 we finally see the battle between Spider-Man and Firelord that preceded the scene below, based on Avengers #258.

While Spidey doesn’t need the Avengers to help him… 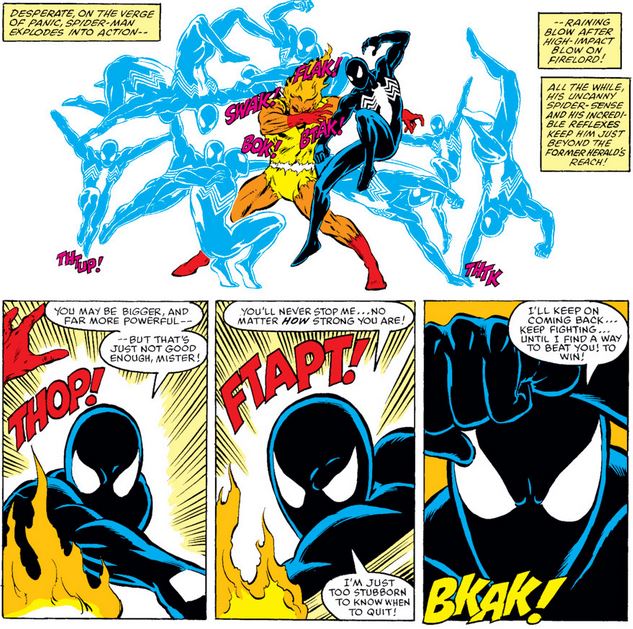 …he does need them to help settle him down and make him realize the fight is over, as Cap did above with the Beyonder. (And Firelord’s no Beyonder, after all.)

The comic ends with a rare acknowledgment—especially for that time—of the cost of superhero battles, in terms of property if not lives. 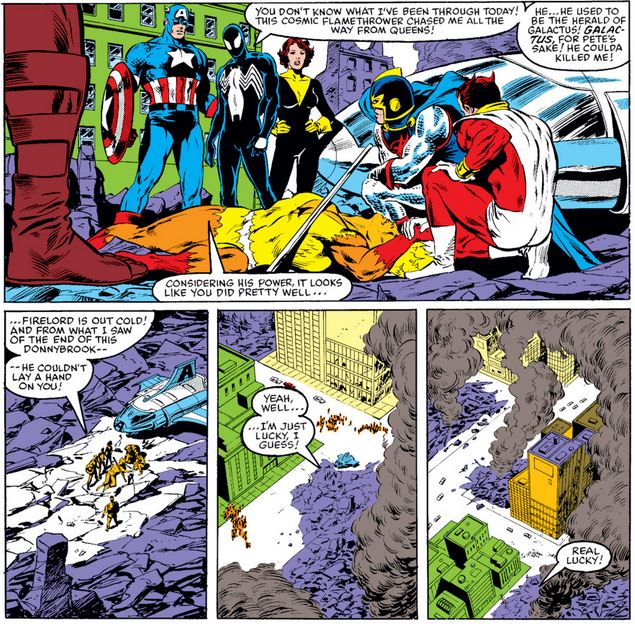 Collected in: Avengers: The Legacy of Thanos

Collected in: Amazing Spider-Man Epic Collection: Ghosts of the Past