Similar to issue #308 featuring a reluctant Armadillo (who returns in issue #316), this issue highlights a villain who’s had enough with the criminal lifestyle, tries to get out, but finds it more difficult than it should be—even with the help of Captain America. Plus, we see more of the Serpent Squad (who should share the title of the book by this point), including a very smitten Diamondback, and also more troubles in paradise as Steve continues to neglect his fiancée Bernie.

When we first see our hero, he’s responding a call regarding a burglary: specifically, of the body of MODOK, killed by several Serpent Society members in issue #313.

While talking to the police lieutenant, Cap picks up on a clue that doesn’t require the world’s greatest detective to tie together with his new cadre of foes. 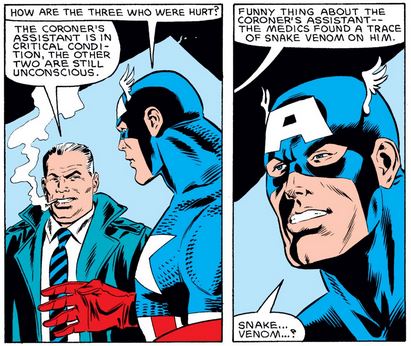 Speaking of whom, they meet the bad guy who wants to cash in his chips and go home: Alexander Gentry, aka the Porcupine, whom Cap and Nomad roundly defeated in issue #285, and who obviously doesn’t merit the respect of the Serpent Society. (Maybe they the read the issue too.) 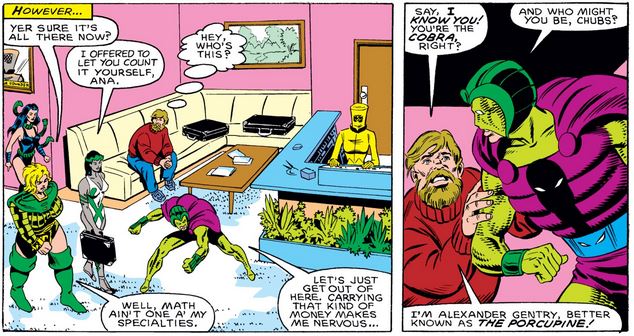 I find the panel below very heartbreaking: Just a guy, in a sweater, asking another guy, in a snake suit, for a hand, and it’s the guy in the snake suit who’s freaked out.

Poor guy: If he’d been at DC Comics, he would’ve married Donna Troy. (Come to think of it, though, his lookalike successor as the Porcupine, Roger Gocking, became involved with Spider-Woman, who does look a lot like Donna Troy. Hmm…)

Anyway… next we rejoin Steve at his drawing table, working on the Captain America book for the in-universe Marvel Comics, and it seems he’s still not happy with how the writer is portraying the character (even after their presumably in-depth conversation in the last issue which we did not get to hear).

Very unrealistically, the artist lets himself get distracted by a phone call, and just has to investigate… even when Bernie wants to talk. (And I mean, she wants to talk.)

The call passed on by his “information network”—maybe Hiram and his pals from issue #313—was from the Porcupine, who apparently didn’t think the call would work, though he probably is flattered that Cap would even suspect he was being set up.

Turns out Gentry hasn’t so much turned over a new leaf as he just got tired of being a D-list villain at best. (Again, it hurts a bit to hear even a criminal be so hard on himself. He makes Peter Parker sound self-confident!)

Cap proves he knows what an ounce of prevention is worth, before stumbling upon another useful tip… 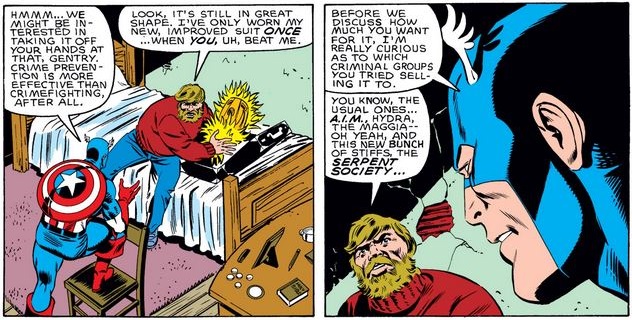 …one that cracks this case wide open, no sleuthing required. (Everything’s coming up Cap this issue!)

Cap doesn’t answer that—”yeah, whatever, talk to Tony Stark”—but does begin crafting his plan to trap some snakes… and this plan involves quite a bit of subterfuge, which he normally doesn’t like, as well as convincing Gentry that he’ll be safe. 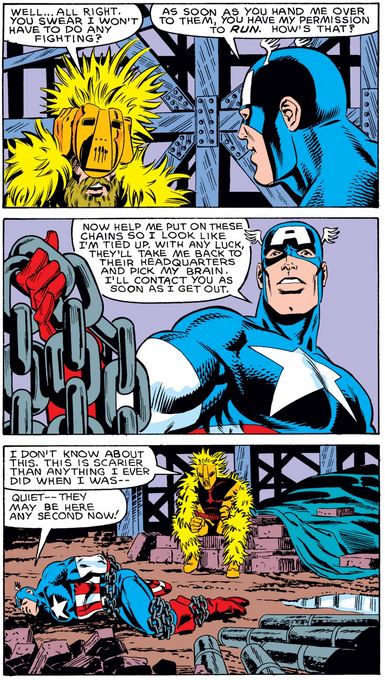 When the Serpent Society arrives, leave it to the thirsty one to verify Cap’s identity, and try so spare his life… for reasons.

Apparently it’s the hungry one who gets to do the deed… but he just can’t get a bite.

His cover blown, Cap lays into the rest of the Serpents, while Diamondback shields her eyes…

…before going after the Porcupine. After Cap defeats the rest of the snakes, he finds Gentry lying on the ground with Diamondback nowhere to be seen. Gentry tries to use his final words to beat up on himself one more time, but Cap won’t have it, and assures him that he’s going out as a hero.

Those were not merely words to soothe a dying man: Cap makes sure Gentry is honored in death as well.

(Touching as this is, it seems odd for the Avengers to memorialize the Porcupine as a foe, even an “honored foe,” rather than the hero Cap claims he died as.)