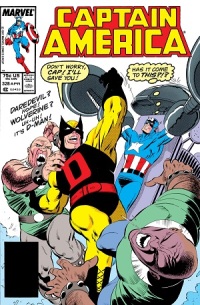 This issue is the first of four issues featuring the greatest superhero sensation of 1987, D-Man, in which he helps Captain America search for the mysterious Power Broker, and building up to the game-changing issue #332.

Our story opens at the Los Angeles headquarters of the Ultimate Class Wrestling Federation, where Cap hopes to find information on the Super-Patriot (John Walker) and the Buckies who have been plaguing him in recent issues. The only problem is: None the wrestlers believe that he’s actually Captain America… 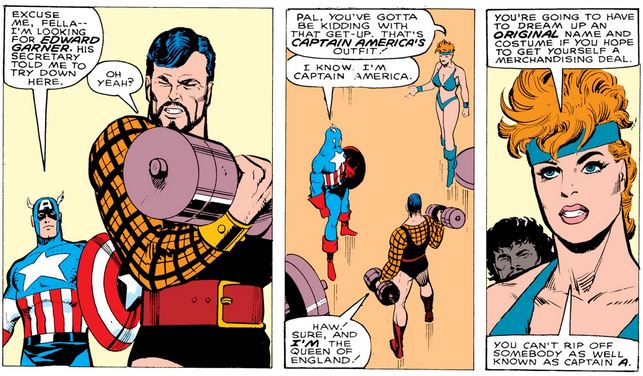 …because he’s not big enough?

(Actually, given Cap’s height and weight as stated later in the issue, they might have a point.)

Cap and the wrestlers mix it up for a couple pages until Nuklon from DC Comics’ Infinity Inc. breaks them up. Just kidding, it’s Dennis Dunphy, and he makes Cap answer his riddles one before he accepts him as the real deal. (Of course, you knew the answer from the post on that issue.) 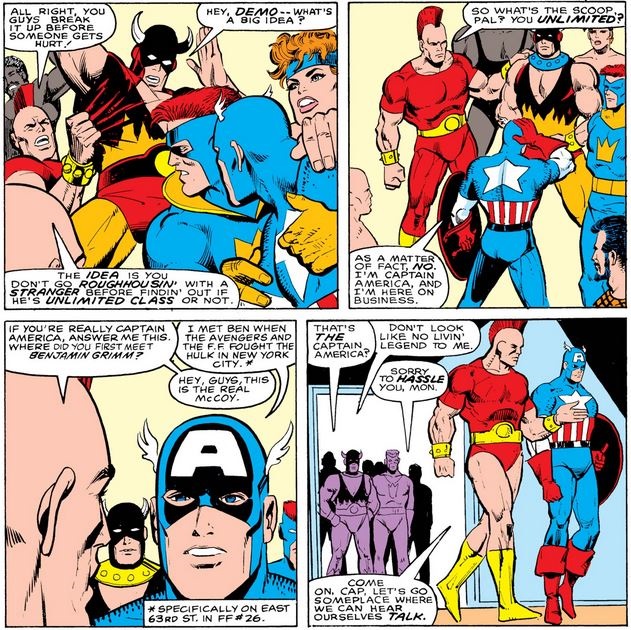 After “Demolition” Dunphy introduces himself and apologizes for his pals, Cap fills him in on his own mission, and Dunphy suggests they hit the showers. 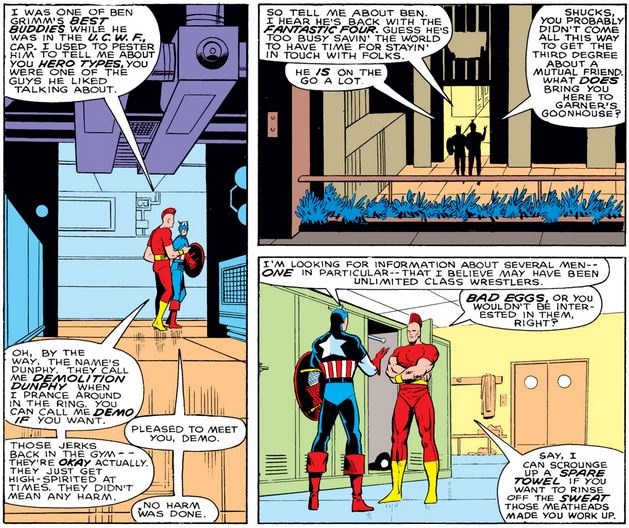 While they clean up—during which Cap is very nonchalant about his secret identity, presumably because he all but abandoned his private life outside of occasional visits to Wisconsin to see Bernie Rosenthal, his sort-of-maybe ex-fiancée—Dunphy fills Cap in on his own past with the ever-lovin’ blue-eyed Thing (from issues #28-36 of his own mag), then suggests they check the ECWF files for clues on Walker and the Walkettes, but to no avail. Cap knows just who to look for next, and Dunphy invites himself along. 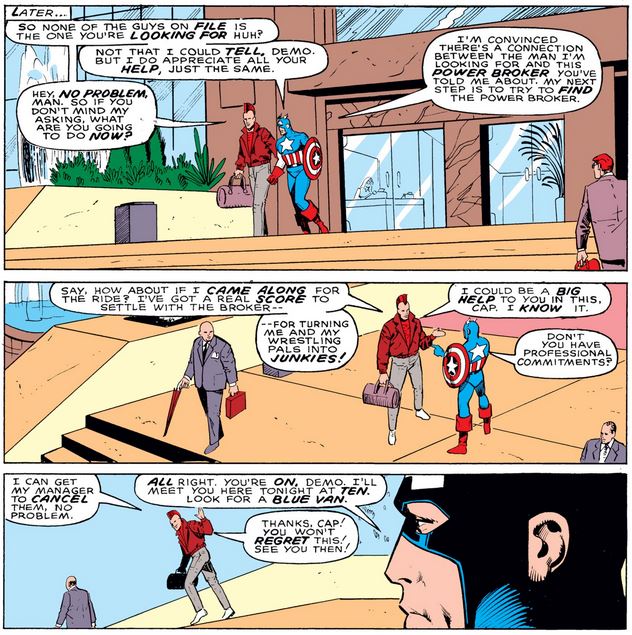 Apparently self-conscious about the Nuklon thing, Dunphy arrives at the Capvan with a newly shaven head and a superhero costume, which makes Cap hit the brakes on this new relationship. 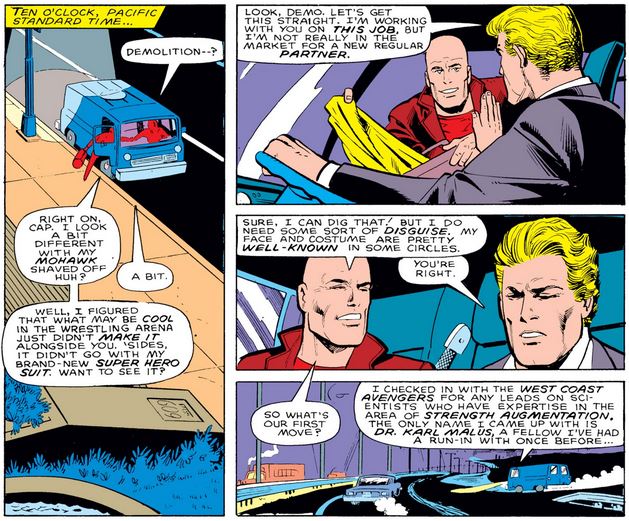 And just look at the costume he came up with! Look at it! (Imagine John Mulaney saying that last part.) 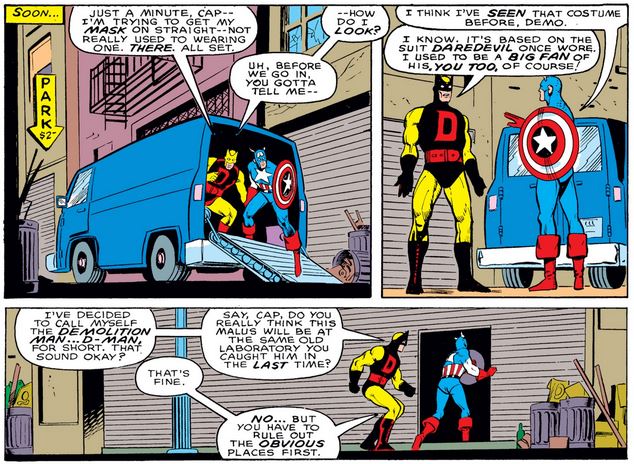 After another dead end, Cap and D-Man grab some food, and Cap fills his new friend in on Walker, openly admitting to feeling as defeated emotionally as he almost was physically. (Remember how long it took for him to open up to Bernie about stuff like this? He’s known Dunphy for five minutes!)

(Before you rush to defend Cap’s honor, you’d better wait until later.)

D-Man gets hold of the Power Broker’s card and Cap pays him a visit, apparently at the airport.

Not to get too personal, but I happen to be 6’2″ and 240 pounds as well—although my bodyfat percentage is, ahem, a smidge above 2% (maybe 2.5%, ha ha)—so I can understand the wrestlers earlier not believing that a guy his size (that is to say, my size) could be Captain America!

It seems Cap is using his unbeatable disguise as Roger Stevens (first used in issue #120), but this doesn’t seem to come up in lie-detector test he unwittingly undergoes.

It seems the “machine” reads Cap better than Dunphy does. But check out what makes it say “TRUTH” below… he admitted as much to Dunphy at breakfast, but he uses more stark terms here.

The final lie outs Cap, attracting the attention of two musclemen, whom he evades, finding himself face-to-face with Karl Malus, who luckily doesn’t know the face he sees in front of him… not that it matters in the end.

Malus examines Cap based on the scans when he came in and finds some existing “augmentation,” and decides to see what happens if he adds some more—paperwork be damned!

Malus leaves with the machine still active, but Dunphy bursts in, breaks the machine, and rescues Cap. Our hero has some questions for Malus, and more thoughts about the possibility of having super-strength again, especially given the stronger foes he seems to face these days. 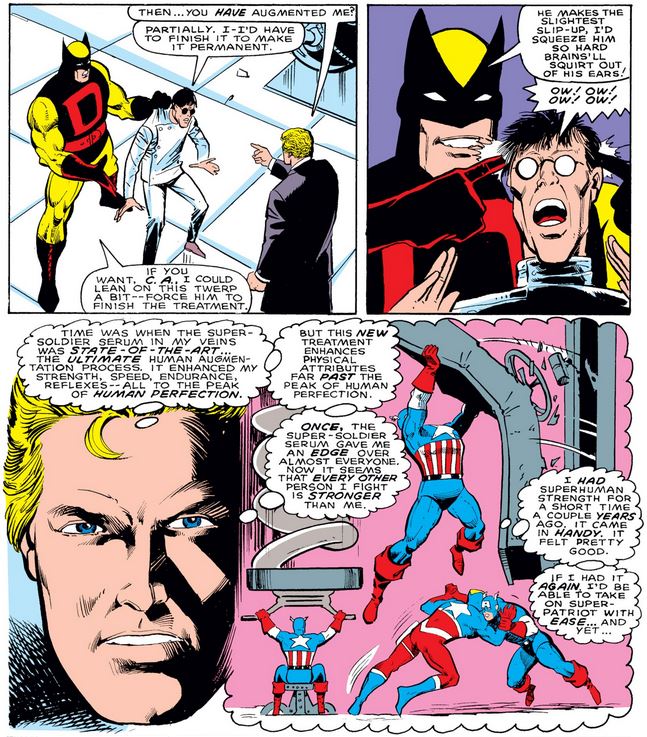 Cap tries to get medical advice from the good doctor while D-Man urges him on (and almost exposes him in the process).

Cap thinks through the choice, coming down on the “safe” side of making things harder on himself to keep things interesting, which seems indulgent given his heroic mission. (I see the point about there always being someone stronger, and strength not being everything, but he just told himself how handy extra strength would be, which he seems to dismiss too easily when it comes down to it.) 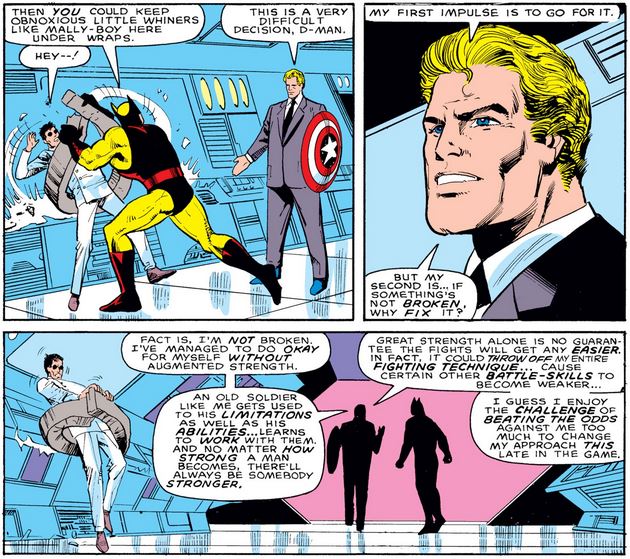 Maybe Cap sees the same point, based on his question to himself below. 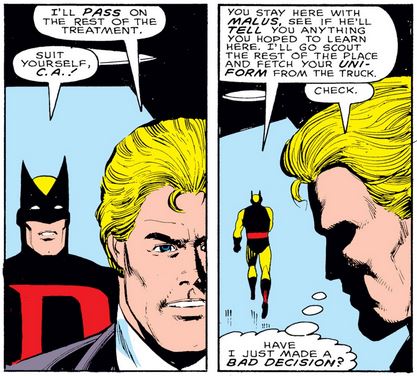 By the way, the ongoing saga in Washington that began in the last issue continues, as the government questions the million dollars that Cap tried to give back (as seen in issue #312). (Surely the middle initial “M” is a mistake, even moreso than the “G” given last time!)

Note the emphasis below on his lack of official status with the U.S. government, in contrast with what they call a “mascot.” You can already see where this is going…

…especially when a mysterious group called “the Commission” is interested in Cap. 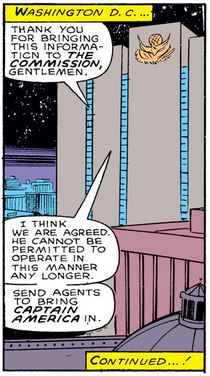 Finally, you will remember that, in the post on issue #322, I mentioned that Cap’s statement about never having taken a life stirred up some controversy in the letter columns. It starts here, thanks to Mr. Comtois, and the editor responds with points similar to those several of the commenters and I made, especially concerning the distinction between his activities as a soldier during wartime and a superhero otherwise. 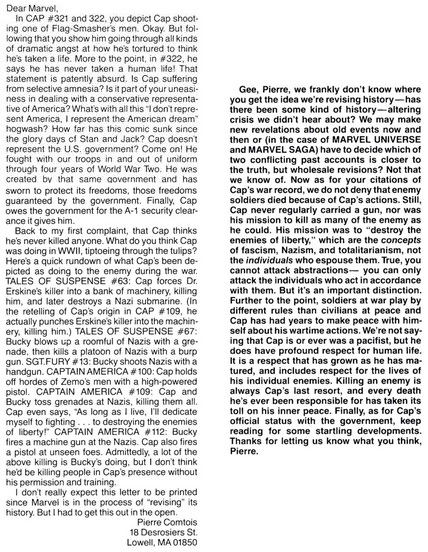