I’m not sure if I said anything about this before, but this issue is a game-changer—any comic with Abraham Lincoln weeping in the corner box has to be important, right? And just look at that Mike Zeck artwork on one of the most iconic Captain America covers ever: His defeated posture, head hung down, while the stripes in the flag run like blood behind him… incredible. (I left the image nearly full-sized for you if you want to enlarge it.)

The comic itself involves a lot of soul-searching, similar to issue #176, but as the issue begins, Cap doesn’t know this yet. As a would-be terrorist plans to attack the Washington Monument—a parallel storyline that we’ll catch up with before the issue’s done—Cap is visiting the Pentagon in search of answers about G.I. Max, the super-soldier he fought in the last issue.

Imagine being the first person at work that day! (Somehow I don’t imagine the Pentagon ever being closed, although I would assume it’s very secure.)

After he finally gets inside, he experiences some theater of the absurd.

When he finally sees the man he came for…

…he expresses his displeasure in a most respectful and reserved manner, while also reviewing his unofficial status with the U.S. government and military (which becomes a point of contention later).

The general gives him the standard brush-off before insulting his integrity, but before he can show him the door…

…the FBI agents who have been looking for Cap the last few issues finally find him. (To be fair, he’s not exactly hiding.)

Now we get down to business, and even though there are familiar sights and faces in the room, Cap has suspicions from the word “go.”

Although the man in the suit and tie doesn’t introduce himself, he does briefly introduce the Commission, some of whose agents Cap has encountered before.

Next, Mr. Eyebrows lists out the Commission’s concerns about Cap, focusing on the government’s role in Project Rebirth and Project Super-Soldier, agreements Steve Rogers entered into when he accepted the role of Captain America, and the expectations the government had of him at the time (most of it shown in less specific terms in issue #255).

Cap doesn’t dispute any of this, but neither does he like where it’s headed, especially when Eyebrows turns to property and contract law to make the rest of his case. Cap argues that he has lived up to the spirit of the agreement, serving the American people in several different capacities…

Then they bring him the tax returns that started this entire debacle in issue #327, on which Steve Rogers properly claimed income he received from the government for his service since 1945 (in issue #312), money that he tried to return but was refused—and which now the Commission is trying to use as leverage to make him agree to work for them.

Finally, whether or not he meant to, Eyebrows lays out the real issue: The Commission believes they should be considered the country as far as Cap should be concerned, whereas Cap has always served the American people and the American dream, not whoever speaks for them at any particular time. (That the Commission does not understand that speaks to how little they understand Captain America—it’s almost like they don’t even read my blog!)

This is where the soul-searching begins, starting with a call to Bernie Rosenthal (unless he bent the cabbie’s ear for a bit as well). 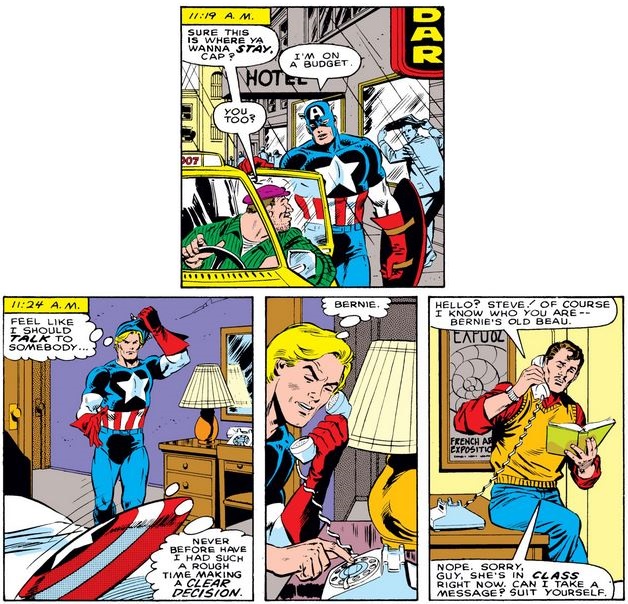 “Bernie’s old beau,” huh—it seems Bernie’s study buddy Paul has a clearer idea about the status of her and Steve’s relationship than either of them do (based on their last encounter in issue #327).

In lieu of Nomad, the Man without an Address or Phone Number, Cap calls several of his friends and colleagues, with Sam Wilson giving fairly reasonable advice, Dennis Dunphy expressing his unconditional support, and Captain Marvel making a valuable suggestion.

Actually it’s not, based on what he just thought to himself. Nonetheless, he does want to consider both sides of the issue, so he imagines what might happen if he agreed to the Commission’s demands… 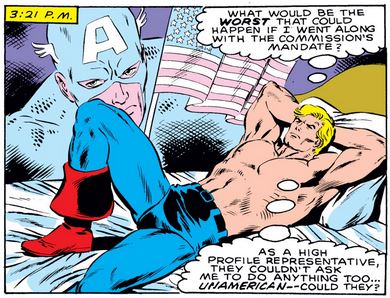 …part of which apparently has him becoming the Comedian from Watchmen. (He’d have to borrow a cigar from Nick Fury, though.) Then he considers what would happen if he said no, the worst part of which would be going begging to Tony Stark for money. (I do appreciate that he considers his successor being a Black man—could he be thinking of Sam? Based on what he said above, he might be willing to give it a go, until the government tried to push him too far.) And then the lawyer calls, and Cap’s day gets infinitely better.

Of course, she begins by stating the obvious: They need to see any written documents the Commission is relying on! Her second thought is more interesting, though: Even if the government created the name, costume, and shield, Steve Rogers definitely made Captain America into the effective, meaningful symbol it is, largely based on his independence from any political influence (which would only be compromised by the Commission’s plans).

Cap still has hopes of speaking to Bernie, but settles for a little boy (and dismisses his mother Holly, whom he still calls Mrs. Riddley even though she clearly wants to be Mrs. Captain America).

Apparently Cap only asked Ram about how much he values being part of his hotline squad, the Stars and Stripes—and he values it highly, even more than dating! (He might change his mind in a few years, though.)

After hanging up, Cap considers what his retirement would cost Americans who depend on him for inspiration—implicitly assuming that his successor might not stand for the same ideals, especially if the government chooses someone who will do whatever they say.

By the next morning he’s resolved—to what, we don’t yet know—and catches up on the other goings-on in this issue, namely John Walker, a.k.a. Super-Patriot, thwarting a bomb-attempt on the Washington monument. (Gee, I wonder if the Commission has heard about that…) 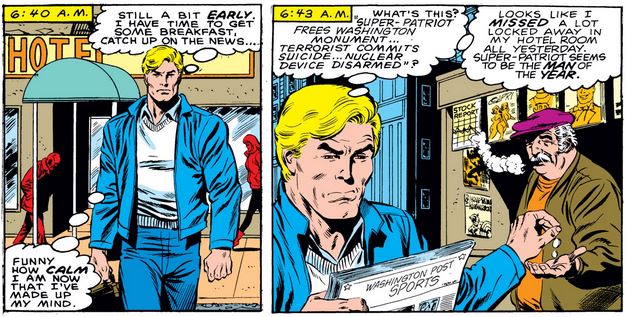 This time, it’s Steve Rogers, not Captain America, who goes through security to enter a government building, a portent of what is to come. 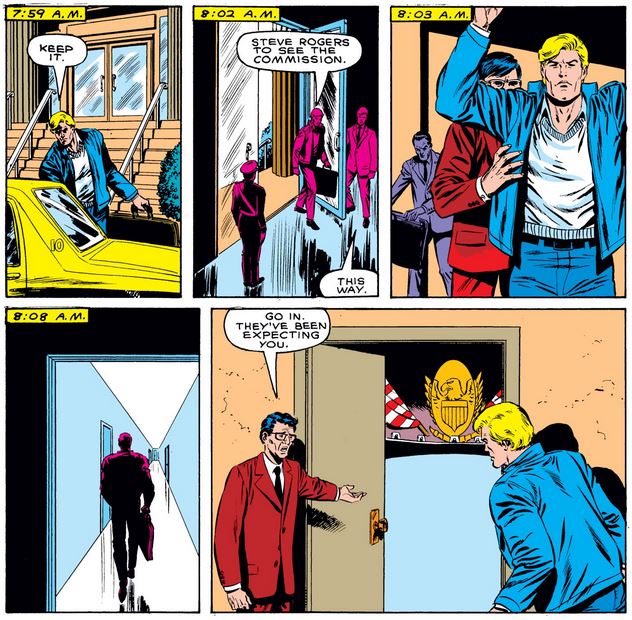 There’s a lot in the final page, but I couldn’t bear to split it up—it’s a wonderfully laid out page, with his mask and shield in the center and his figure receding through the bottom panels. And by this point, nothing he says below is new, encapsulating much of what was laid out earlier in the issue, but stated concisely and powerfully for the benefit of the Commission. 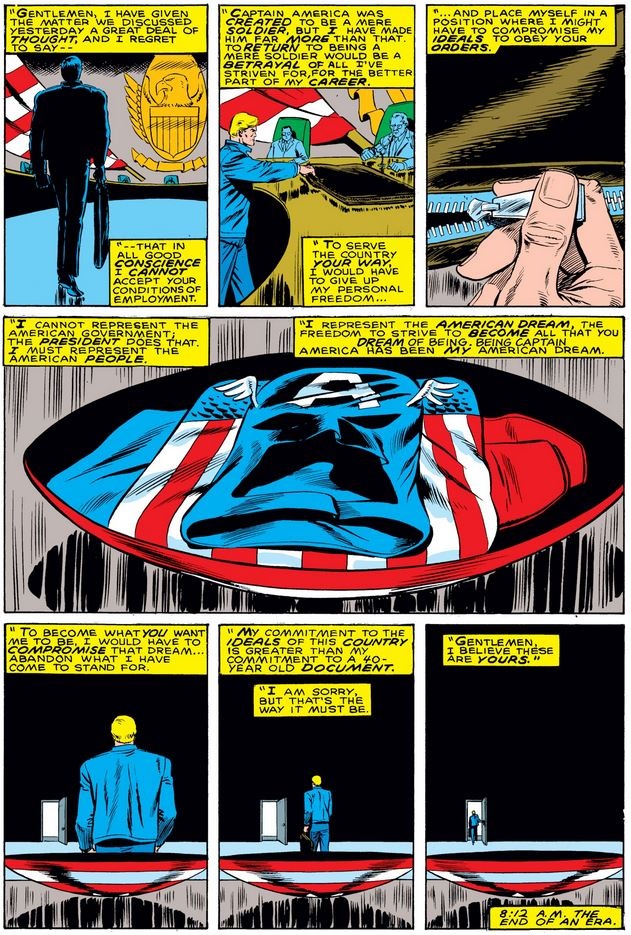 Where do we go from here? Is this blog done? Is this… goodbye?

Not in the least! Although Steve Rogers does not appear in the next three issues, which I cover together in the next post, we do see the Commission reacting to Steve’s decision and determining their next steps, all in consideration of how he established the Captain America identity and how they carry that forward while making sure any new Captain America is firmly in their control. Even though Steve Rogers is taking some time off, his influence and legacy is very much present in the Captain America title as we move forward.