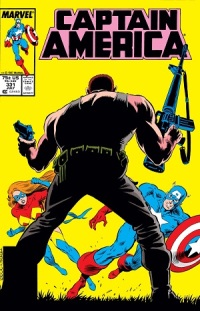 In this issue, the ongoing storylines about the Power Broker, D-Man, and the U.S. government all collide as they lead into the game-changing next issue (#332). Plus, we learn a little more about Sharon Ventura (for those not familiar with her from The Thing and Fantastic Four) and meet the big fella on the cover, who concerns Captain America more for his implications about corruption high up in the government than the overdeveloped muscles on his back.

Just in case you’ve forgotten where we left D-Man at the end of the last issue—after being artificially “stimulated” and then fighting Cap until he collapsed—the opening splash page serves as a dramatic reminder.

Once Cap hears a heartbeat, he calls Doctor Malus to D-Man’s side, and then they free Sharon, whom they found held alongside D-Man in the last issue. She reacts how you’d expect a captive to react, which Cap is characteristically sensitive to, pleading with her to let him help her.

Cap begins to suspect that she was sexually assaulted after being abducted—which is confirmed in Fantastic Four #306—and tries to assure her he’s no danger, barely defending himself against her attack and even offering her his shield, finally leaving it up to her whether to follow him or not.

He starts to get through to her, so he makes one last promise and leaves her to her choice (and her agency). 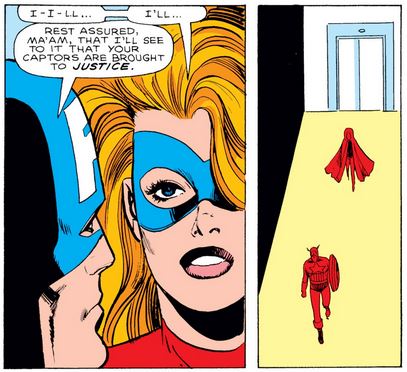 Malus tells Cap the only way to save D-Man is to reverse the augmentation process, but when his friend says he trusts him, he frankly wonders if he should, remembering all the friends and loved ones he’s endangered.

As Malus starts the process on D-Man, Cap attends to the waking Power Broker—Mr. Jackson, if you’re nasty—laying out the numerous charges against him. 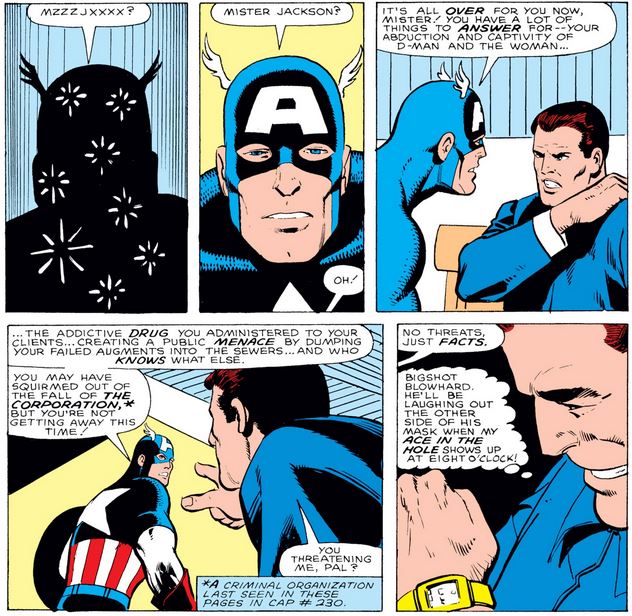 After Malus stabilizes D-Man enough to get him to a hospital, Shroud asks if he and his criminal pals in the Night Shift can slip out the back. Cap agrees, and as a law-abiding citizen who always crosses at the corner, the Power Broken is offended.

Cap doesn’t take the bait, and also doesn’t reveal Shroud’s ruse (discussed in the last issue), but privately he does take Jackson’s words to heart, wondering if he’s been too permissive with the Night Shift despite his promises to the Shroud—concluding that exercising judgment between conflicting principles is not easy. 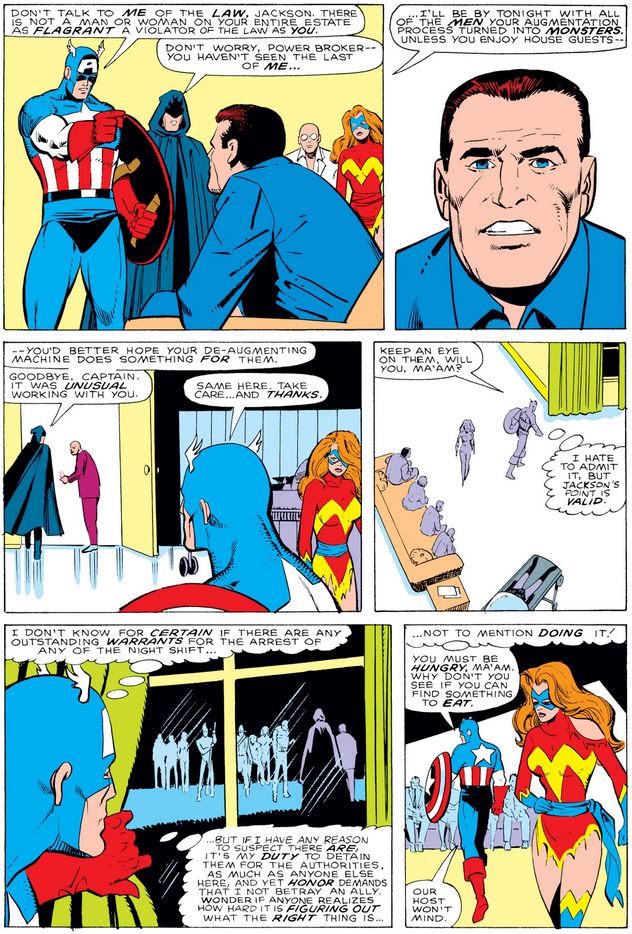 The Power Broker then tries to threaten Cap with the law—which he might take more seriously if he knew that the government was already investigating him. Speaking of whom… 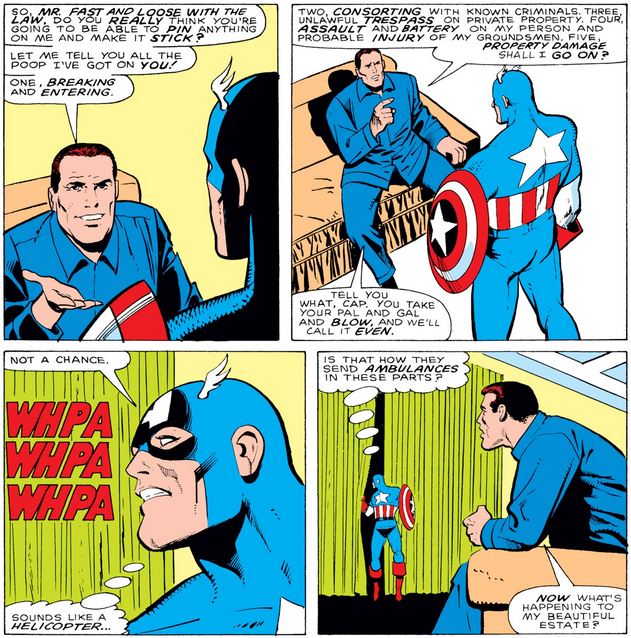 …who’s that in the chopper wot just landed? It’s the U.S. military, claiming to be arresting Jackson—again with the extra ‘s’ on Curtis—and Cap is rightly suspicious from the get-go.

…as does her telling Cap directly. 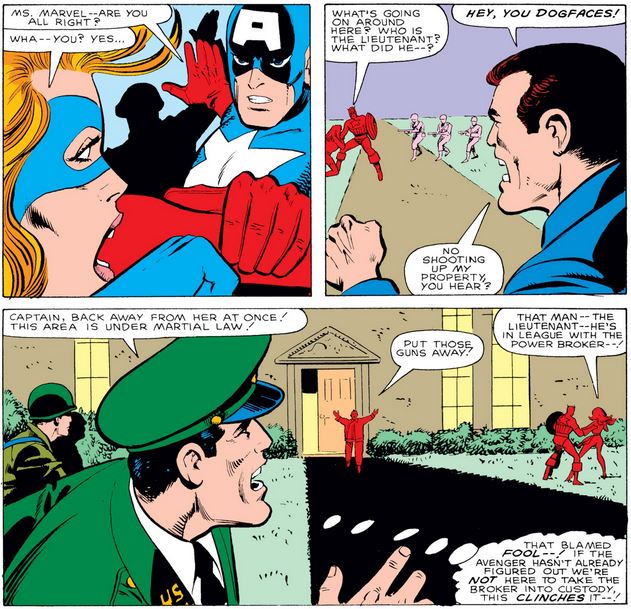 After she tells Cap her whole story, explaining Lynch’s role in her abduction by the Power Broker, the rogue lieutenant brings out his secret weapon: G.I. Max. 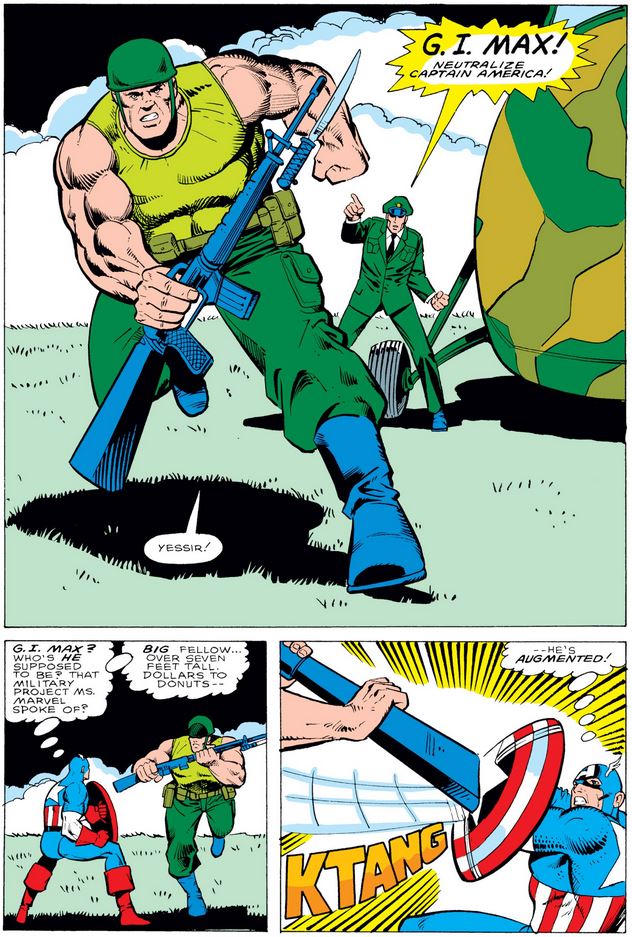 No surprise there (and I’m sure it made Cap once again question his decision to forgo augmentation himself back in issue #328).

Cap figures out fairly quickly that G.I. Max is not well-trained…

…so he has time to consider another ways to approach the situation before just getting down to the fightin’. (Not to mention, the concept of soldiers being trained to “just follow orders” is much more complicated.)

As one would expect, Cap considers a connection between Max and Nuke, the flawed super-soldier he fought in Daredevil #233, and worries that Max may be Nuke 2.0.

His point below would seem to implicate his decision not to augment, but it isn’t clear that he recognizes that.

As they continue to fight, Cap thinks about how high this goes—remembering how high the Nuke business went—and how much trouble he might be getting himself into. (Of course, he doesn’t stop.) 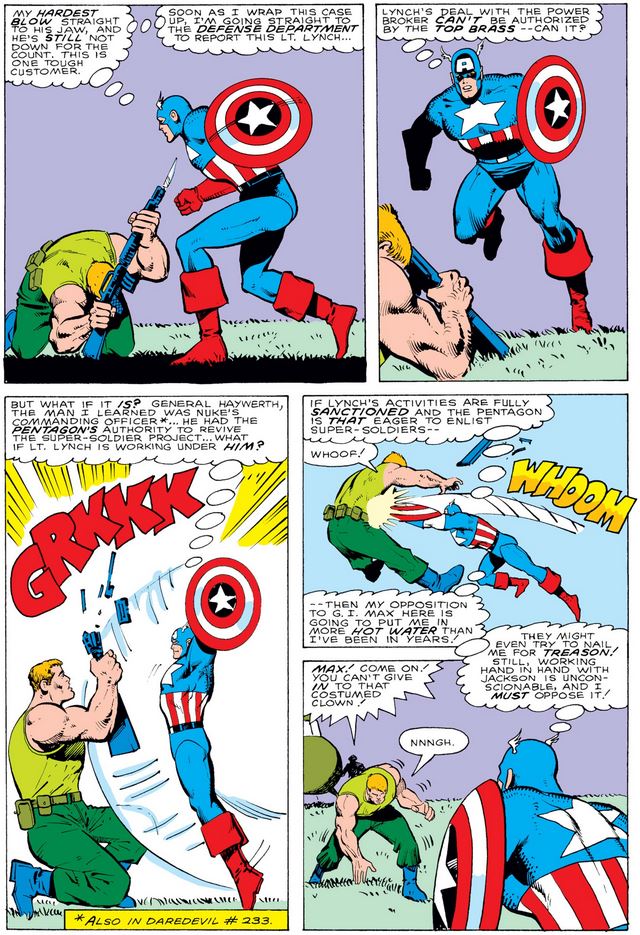 Lynch tries to “help” Max, but doesn’t take into account Cap’s lightning reflexes, and ends up making the situation worse.

Cap takes out Lynch and then turns back to Max, trying in vain to save him, then mourning the loss of a super-soldier manipulated by his own government… 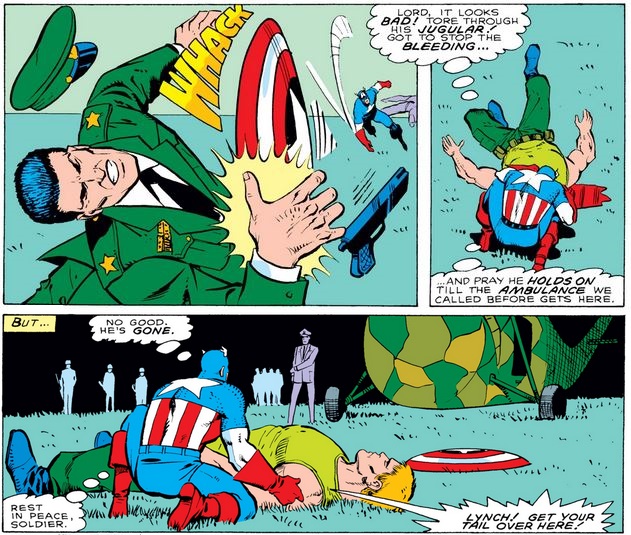 …a concept Cap will confront first-hand in the next issue.

Before we leave, here’s your handy guide to where things stand with our players.

Make sure to return for the next issue if you don’t know what happens… and even if you do!