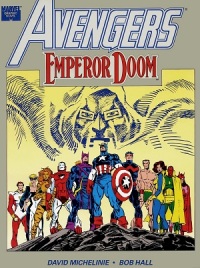 Despite the cover shown to the right, this graphic novel is really a Doctor Doom story that features the Avengers: My copy has “Emperor Doom” in large letters at the top and “Starring the Mighty Avengers” in much smaller print below it. As such, I certainly can’t do justice to the main part of the story here—I recommend the Marvel Age Doom blog once it gets to this story—but Captain America does play a small but significant role in it, striking notes of autonomy and freedom that we recently saw threatened by Magneto in X-Men vs. Avengers.

In the first third of the graphic novel, Doctor Doom establishes and carries out his plan for world domination and salvation, based on capturing the Purple Man and using a “psycho-prism” to magnify his mind control abilities to cover the entire globe. He uses a smaller version to take control of Namor, and is careful to take out any other heroes whose unique brains are resistant to the Purple Man’s power, such as the Vision. Once everything is in place and the people of the world are under his mental command, Doom visits the United Nations and gets unanimous support (from many familiar faces of 1987 politics) to become ruler of the Earth.

He makes good on his promises, and soon uses his mental tyranny to cure the world’s (other) evils.

(No one can say Doom is insincere about his beliefs: In June 2010’s Doomwar #3, to gain access to the stores of vibranium in Wakanda, Doom submitted to the judgment of the Panther God to assess the purity of his heart when he claimed to be able to save the world by ruling it. He passed.)

But Doom forgot about Simon Williams, a.k.a. Wonder Man, a man made of pure energy, who had been submerged in a sensory deprivation chamber when Doom enacted his plan. When he comes out, Simon is not affected by Doom’s control, and finds the world a very different place than the one he left, including his fellow Avengers. 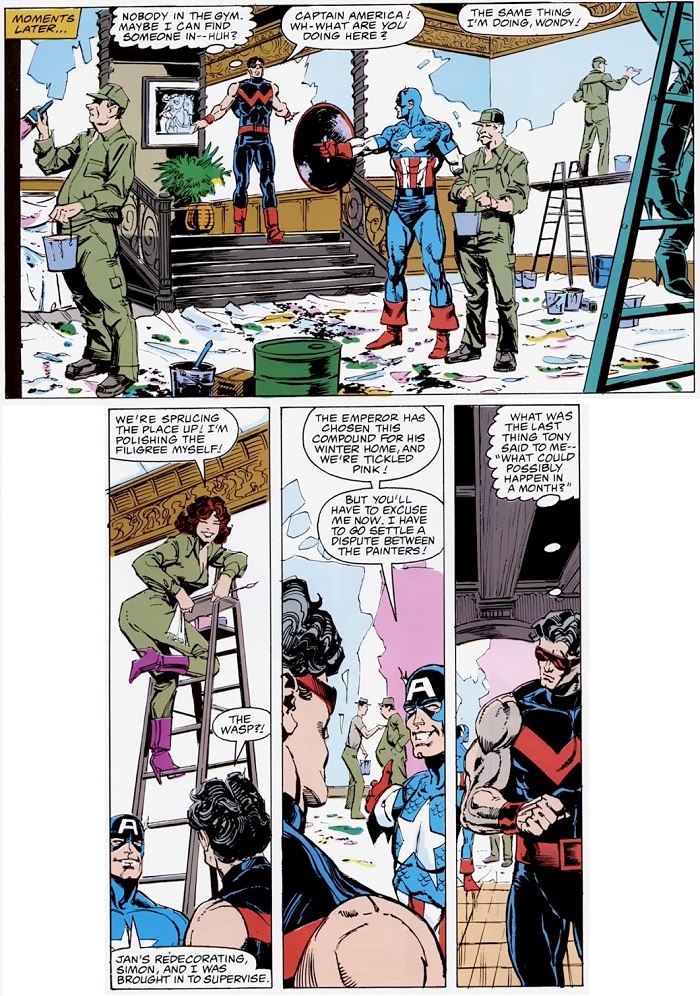 Yes, Captain America is under Doom’s sway as well… 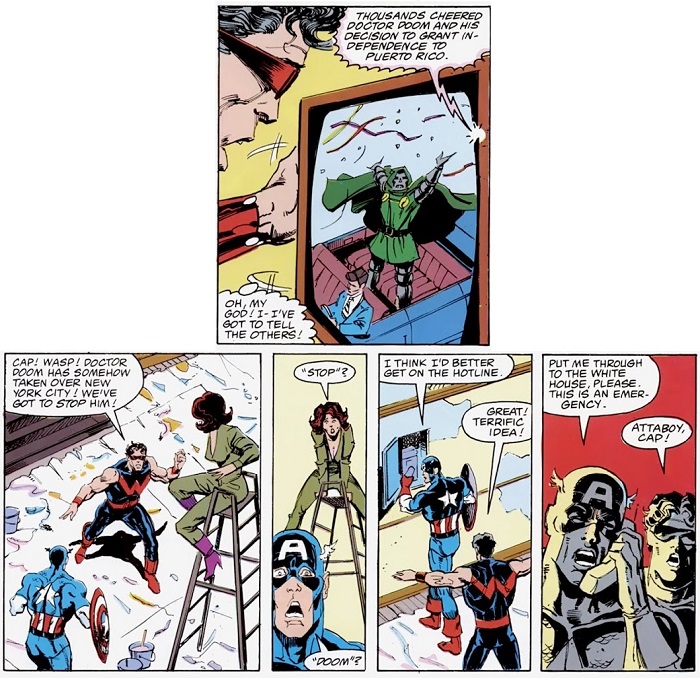 …so much so that he wastes no time ratting out his old friend to the new “emperor.”

Simon manages to escape and go undercover, disguising himself using the skills he learned as a film actor. Meanwhile, we see that Emperor Doom is growing bored with his success, learning that ruling an obedient world still involves a lot of meetings and paperwork. (“Be careful what you ask for,” huh Vic?)

After Simon figures out how Doom took over the world—maybe he played a detective in one of this movies—he decides to work on convincing his fellow Avengers to resist Doom’s influence, starting with those with particularly strong wills, meaning you-know-who. But first, Simon has to get him to listen. 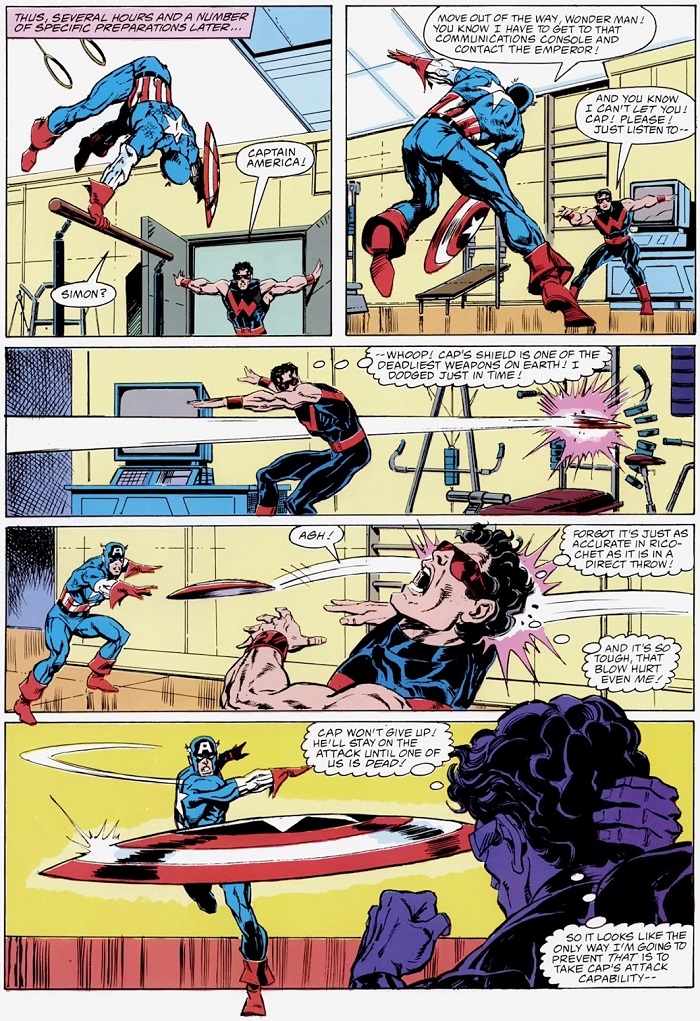 Simon catches Cap’s shield and returns it, hoping to trick Cap into dodging it in the direction of Simon’s fist… which actually works? (I know, Cap isn’t himself… that has to be it. it has to be!)

Simon goes all Clockwork Orange on Cap, making him watch files of Doom being Doom and flattering him as having the most willpower of all the Avengers…

After Cap has calmed down and installed an ad-blocker, he and Simon think of who else among their number have strong wills. Cap very generally cites Hawkeye first, then the Wasp, and finally Iron Man, and when Simon is skeptical of Tony, Cap stands up for him… sort of.

After Cap and Simon trick their three teammates into watching Doom’s Funniest Home Videos—Cap really must not be himself right now—Clint wants to get his wife Mockingbird too, but Cap doubts her strength of will. Hawkeye agrees awfully quickly.

Maybe too quickly, actually, because while Cap is stressing the importance of surprising Doom, Hawkeye is nowhere to be found…

…and it turns out he was trying to recruit Mockingbird anyway, but she alerted Doom to their plan before Clint could stop her. Nonetheless, Cap remains characteristically hopeful.

As they speed to Doom Island in the Caribbean—global rule has its advantages—the Avengers mull over what they are about to do, given the undeniable good that Doom has done for the world. Cap reminds them how Doom did it, emphasizing the cost in terms of freedom and autonomy, but Janet considers that hunger in a state of liberty is still hunger. (And Hawkeye takes Mockingbird’s Doom-influenced betrayal way too seriously.) 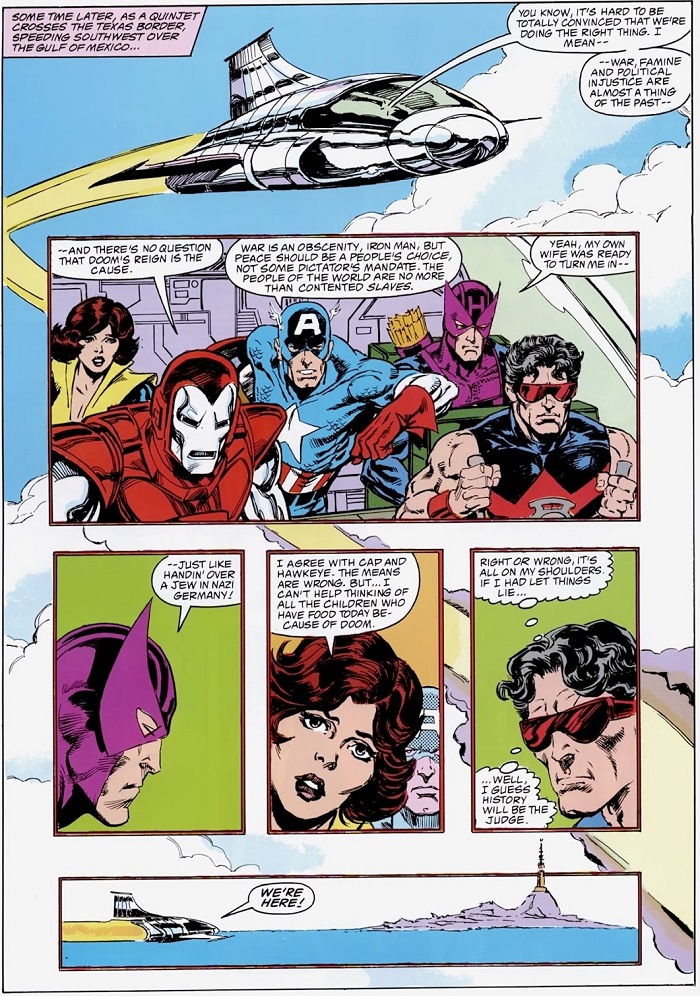 When they arrive on the island, the Avengers face Doom’s defenses, and Cap is relieved he doesn’t have to be delicate.

The Avengers make it inside Doom’s base to where the psycho-prism is, and are concerned when Namor catches the Wasp, but she cleverly thinks of a way to snap the Sub-Mariner out of Doom’s spell.

It works brilliantly, and Namor smashes the prism—with the Purple Man inside—and frees the Earth’s inhabitants of Doom’s control. On the whole, the Avengers are not very upset about the Purple Man’s apparent death, even though he was more of a victim of Doom’s machinations than anybody was. 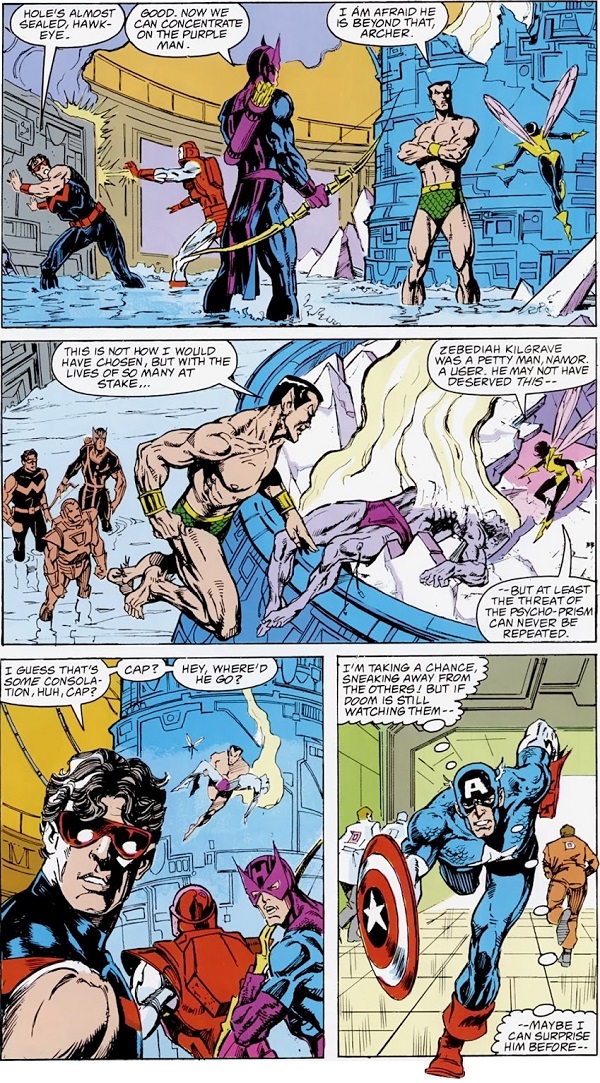 We don’t hear from Cap about the Purple Man because he’s going after Doom, who makes his escape…

…much to Cap’s bewilderment. (I guess he’s not familiar with the meetings and the paperwork.)

As the team leaves Doom Island, they hear news reports of the return of the usual political strife and violence, and while Cap sticks to his guns regarding the primary importance of freedom of choice, Hawkeye is more agnostic, sounding almost wise. (He’s clearly not himself either, but you can’t blame Doom anymore!)

This story had several fantastic panels, many of them seen above, including the first one (“you may applaud me later”). I didn’t have reason to show this one, but it’s one of favorite Doom panels ever, so consider it a gift from me: 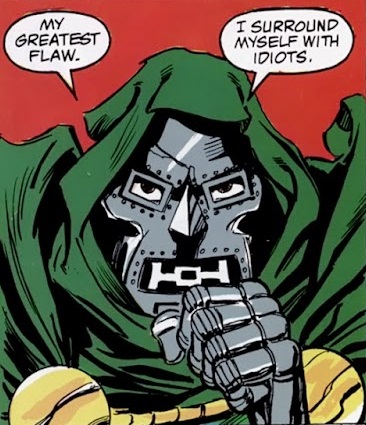