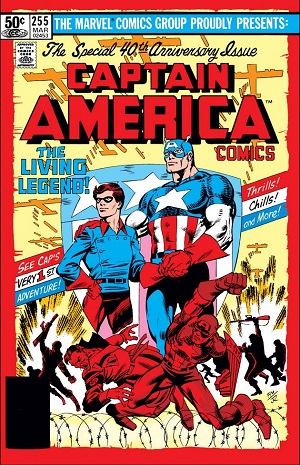 This issue marks the end of the run by Roger Stern and John Byrne and celebrates the 40th anniversary of Captain America by presenting the canonical version of his origin, reconciling previous versions (especially from Captain America Comics #1, Tales of Suspense #63, and Captain America #109) together with the history of young Steve Rogers that Stern and Byrne themselves introduced in their first issue, #247. For a breakdown of the details, see the Marvel wiki page for this issue; here, as usual, I will focus on the panels that showcase Cap’s virtues (and anything else I find interesting, like the changes in his costume and shield).

The opening splash page is, of course, an homage to the cover of his very first comic, from March 1941, showing the famous Hitler punch. (It’s easy to overlook the exposition, which highlights Cap’s courage, strength, and devotion to principle.)

Most of the issue is narrated by President Franklin Delano Roosevelt, who starts out being briefed on the background and progress of several important projects (while making a Washington Post reporter wait outside his office, which explains his opening comment). Note young Steve’s childhood love of fantasy (as seen elsewhere) and artistic leanings (complete with early critics).

His perseverance is also demonstrated early on as he dealt with not only poverty but also the deaths of both his parents while still in school.

We see him first become enraged by the war brewing overseas while waiting to see The Sea Hawk, a magnificent film (despite the absence of the heavenly Olivia de Havilland, Errol Flynn’s co-star in Captain Blood and several other classic movies). Steve is driven to do something to aid the war effort, despite his disdain for violence, but he is rejected by the army… until one particular general pulls him aside.

General Phillips takes him to the secret laboratory of Doctor Abraham Erksine (once referred to as Professor Reinstein, revealed here to be an alias), and Steve reiterates his willingness to take the ultimate risk for his country…

…and once again, recognizing that so many others have done the same. 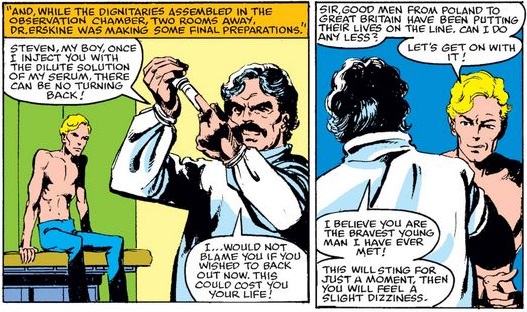 Below we see the transformation dramatized so well in the movie Captain America: The First Avenger (which, for the most part, follows the outline of this version of the origin). 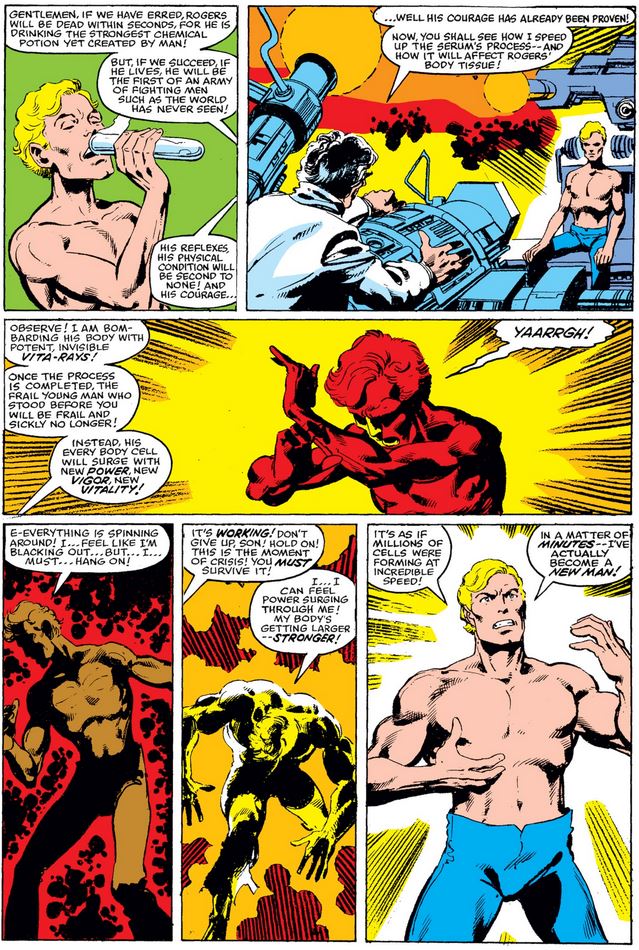 While Steve marvels at his new form, Erskine and Phillips celebrate their success and the future uses of the process…

…but, as we know, it was not to be, as Steve is relegated to be the first and last person to receive this version of the Project Rebirth treatment. (I say “this version” because many others received partial or faulty versions in the years after.) While Steve is subduing Erksine’s assassin, he shows he already realizes the responsibility he has been given as the sole super-soldier. 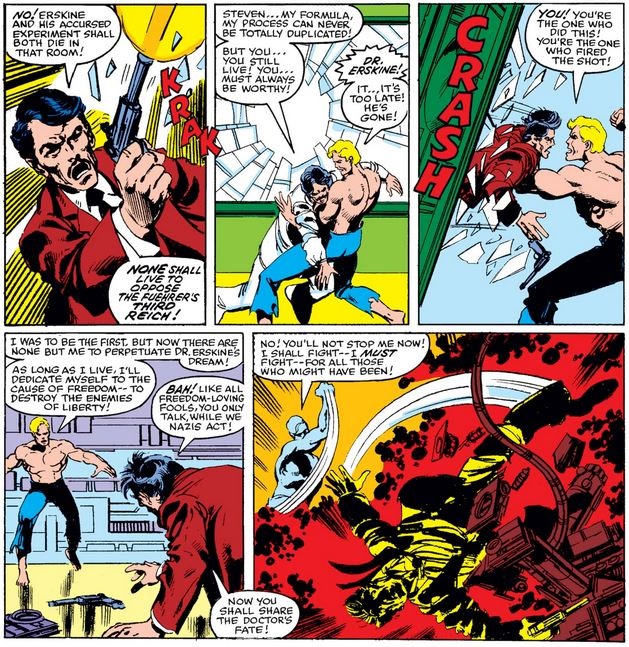 (By the way, despite how it looks above, Steve didn’t kill the assassin, who was electrocuted soon afterwards while trying to flee.)

Next, FDR is briefed on how the newly enbiggened Steve Rogers became Captain America, starting with training in hand-to-hand combat and military strategy. 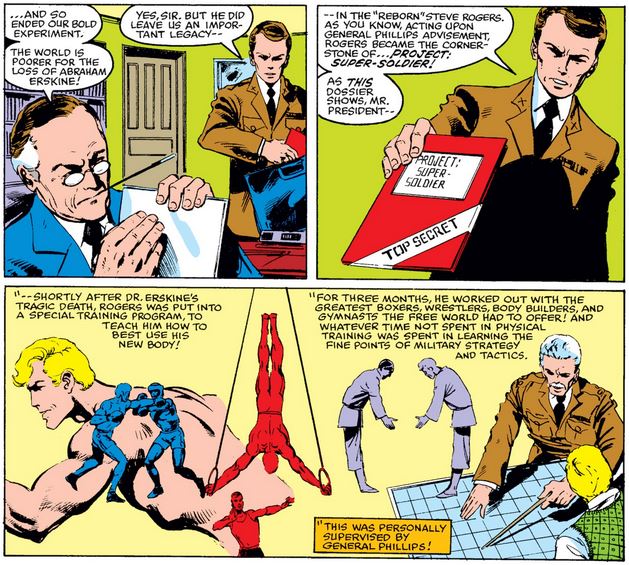 (This helps explain the extensive background in Eastern martial arts that he displayed almost immediately after being found in the icy waters by the Avengers.)

Finally, in March 1941, Steve is given the assignment that would define the rest of his life, to be a symbol of liberty and the enemy of tyranny in all its forms. His statement in the final panel below encapsulates his belief that, although America has never been perfect and has made grievous mistakes, nonetheless it is grounded in principles that he will promote for years to come and defend with his life.

The issue then shows Steve on his first few adventures, during which he already shows his fighting prowess, confidence, and devotion to the American dream that drives him to push on.

And it doesn’t take long to realize a drawback of the original shield, although it can be thrown. 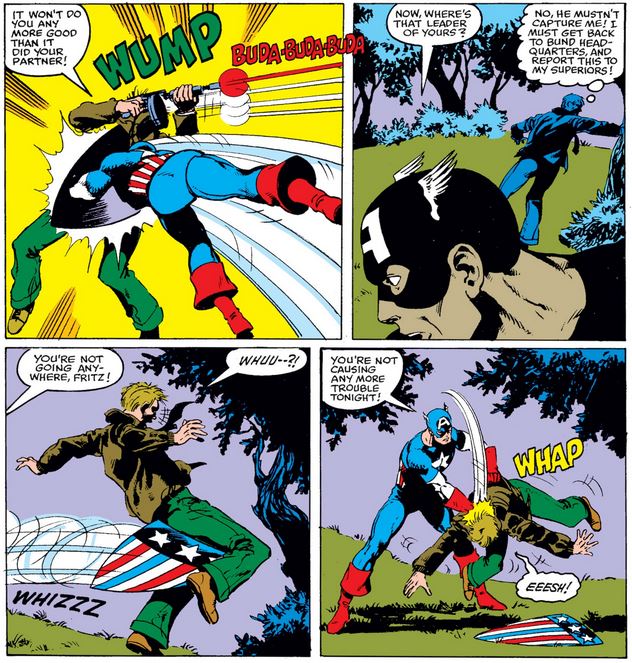 The panels below show his humility, but they also seem to imply that Steve may have come up with the name Captain America himself on the spot. (That would be very strange, but there’s no sign in this issue of him being given the name, such as when he was given the uniform and shield.) 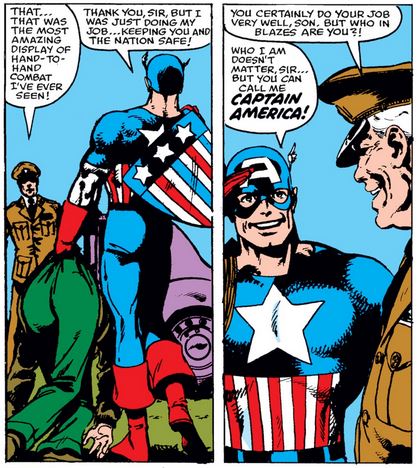 In a later adventure, this time fighting American Nazis that disgust him even more than their German counterparts (for obvious reasons), Cap is made all too aware of a shortcoming on his original headgear, separated as it is from the rest of his costume (and almost from his head).

The president finishes reading the second report just in time to meet the man himself, who is a bit starstruck.

FDR notices Cap’s new connected cowl—and Cap lauds the chain-mail that literally saved his neck in the last issue—before giving him the round shield, hinting at its origins, which are yet to be revealed. (We’ll get there, I promise.) 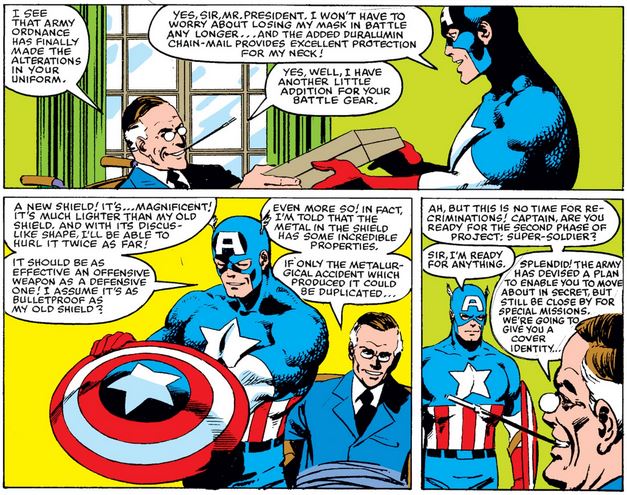 Private Steve Rogers is finally assigned to Camp Lehigh, where he acts out routines from Buck Privates with Sergeant Duffy (as seen in Tales of Suspense #63) and meets a young James Buchanan Barnes.

The rest of Cap’s WWII history, his “death,” and discovery by the Avengers are shown in an incredible double-page montage, with the last bit of exposition emphasizing his status as a “man out of time,” constantly trying to find who he is in a world he doesn’t know. 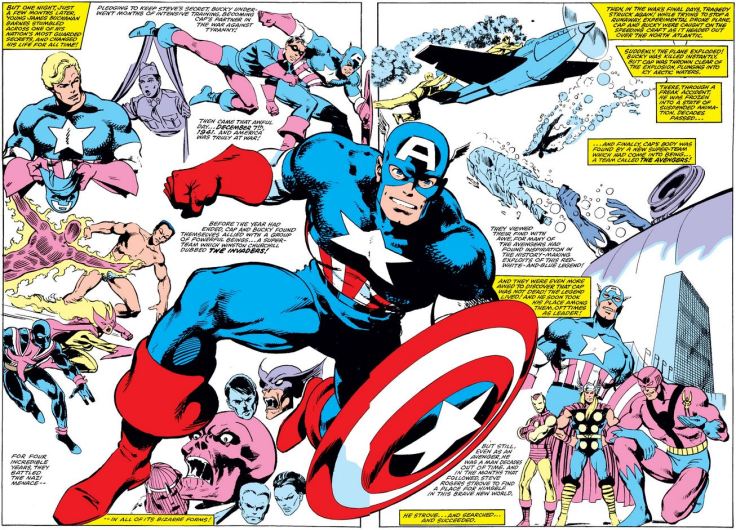 For the last page we return to the current day, but it is difficult to determine exactly when: Although this takes place in the general time of recent issues, given his Brooklyn Heights residence and artistic career, he was in England at the end of the last issue and is still there at the beginning of the next!

After he asserts his duty to keep his word and finish his latest gig on time—and topless, though I don’t know if he promised that too—Steve contemplates his dual life, wondering if it’s worth it to try to meet his commitments as a freelance artist while also serving as the Sentinel of Liberty. Just then, a certain song plays on the TV…

…and Captain America wonders no more.