These six issues contain minimal Captain American content for our purposes, so I’m bundling them all together for your convenience—and value! As I do in these cases, there will be less story synopsis than stories in which Cap is the focus, though I encourage you to seek out the full stories in the links at the bottom of the post.

Avengers #204 starts out a two-part story in which the Avengers battle the Yellow Claw, the 1950s Fu Manchu-style villain whom Cap fought in Captain America #165-167. This issue is also pencilled by Don Newton, one of my favorites, who also drew Avengers Annual #9. The issue starts out with the Avengers saying goodbye (again) to Hawkeye, with Cap just a little bit too understanding… 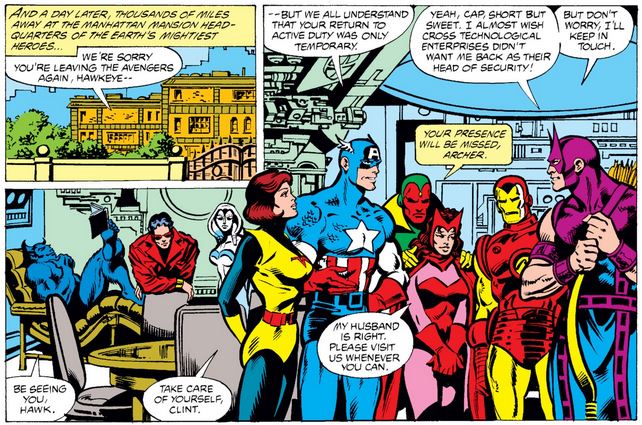 …before Cap calls a meeting (ugh). The rest of Avengers are saved when Jarvis gives Cap a letter alerting him to trouble.

Imagine sending an urgent distress call by the mail, even in 1981—not exactly the dark ages. (I mean, MTV started that year!)

Cap tells the other Avengers about the Yellow Claw (with no editor’s note, strange), and several others fill in details about his captive, making the situation even more urgent to Cap…

…but less so to Vision, who raises a sound political point (which Cap himself has recognized recently). But Cap sees a situation pointed south, and so he rallies the team. 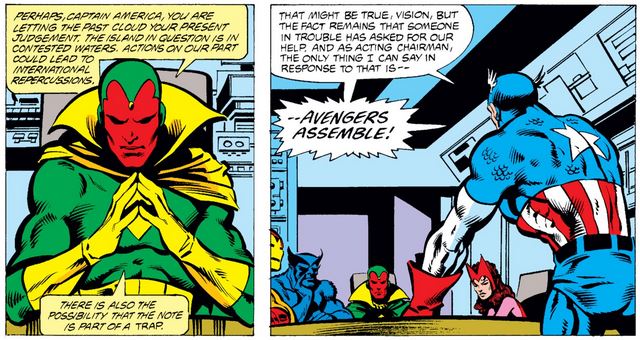 Soon the Avengers have flown to Claw’s island, and Cap exhibits “sound strategy” (as always).

Later, the rest of the Avengers are attacked by some sort of giant jellyfish, and finally a writer has found a situation in which Cap’s shield does not save the day. Although you’d think its razor-sharp edge would still pose a threat to the creature’s… thingies, whatever they’re called, I’m not a marine biologist. (No, you’re stupid. Shut up.) 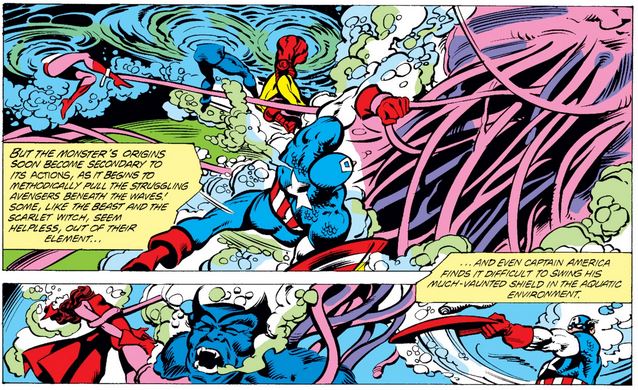 Next, something is shooting boomerang-shaped blades at the team, and now Cap feels at home with his shield, feeling like a young man in World War II again.

Once the team finally makes it through the gauntlet, they meet the Yellow Claw himself, while Wasp sneaks around, and Cap slyly signalling that he hears her.

To the team’s surprise, the Claw easily allows the woman—who had been pledged since youth to marry him—leave once he “realizes” she did not come to him willingly to bear him an heir. (I doubt she was ever ambiguous on that point.) The Claw reveals he has many other women “willing” to do that duty, and the Avengers leave as well, feeling disgusted but powerless to stop the Claw.

In Avengers #205, once back at Avengers Mansion, the team collectively regrets leaving the situation as it was (and not even knowing, as the reader does, that the Claw plans to kill every person on Earth besides his children). Iron Man reiterates the international political difficulties with rushing back, and this time Cap agrees.

Jarvis interrupts Cap with news of a visitor: one of the Claw’s men, whom Cap is uncharacteristically skeptical of, usually being more trustful to the point of being gullible. 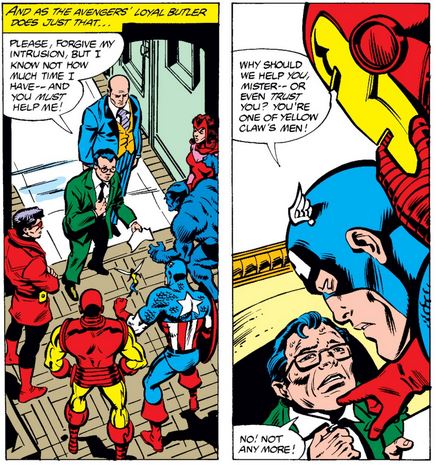 Before the man can talk, a bomb in his body explodes, triggered by the Yellow Claw, but he still has time to explain the Claw’s plans, which is enough to convince Cap and the others to return. From here on out, it is mainly Vision’s story with the Avengers backing him up, and I won’t reveal the ending, but I will close our coverage of the issue with some encouraging words from Cap:

In Avengers #206, we start with what may be the meeting Cap trying to convene two issues ago, or it might be the traditional Swedish fika, who knows.

They are soon alerted to a massive fire in New Jersey, so Cap mobilizes the team, and everybody is willing to lend a hand.

On the way there, Iron Man updates Cap on the situation…

…and I only hope he regards that possibility as a bad thing!

We get a quick reminder of Cap’s skills as a aircraft pilot, although he ends up getting the Human Torch’s help with the landing (courtesy of a well-timed updraft). 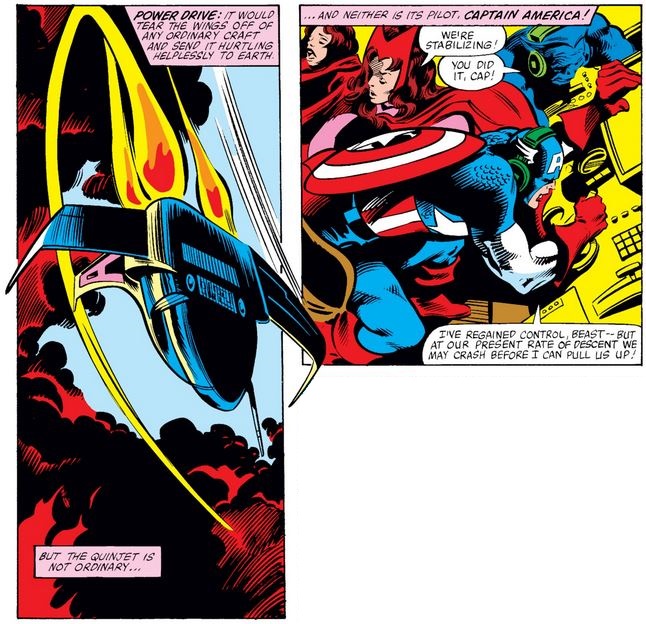 Because the fire seems to negate the Torch’s powers when he gets too close, it’s up to the Avengers to suit up and head in, albeit without the Wasp.

The team discovers a man, Pyron, in the flames, who confesses to his crime and draws heat (sorry) from Cap.

Unfortunately, we don’t find out, as the other Avengers attack him. In the end, it is the Wasp, after suiting up to enter the fire and then shrinking out of it once inside, who saves the day with, essentially, a fire extinguisher.

As it happens, Cap will face another raging fire and another arsonist, but with much more dire consequences, soon in Captain America #258.

In The Incredible Hulk #258, we get one page with Rick Jones and Captain America, who has to tell his former sidekick that the Avengers can’t head into Russia to find the Hulk because of… you guessed it… international sovereignty issues, especially after they breached the Iron Curtain in Avengers #188.

Finally, assorted members of the Avengers, the X-Men, and the Fantastic Four all guest-star in the first two issues of Dazzler, the very best disco-themed comic you’ll ever see covered on this blog. In issue #1, we see a simple “day in the life” page with the Avengers, including Wasp and the Beast getting on each other’s nerves and Iron Man feeding Cap a line about his armor not actually doing the work (psst… it is), but still silently admiring Cap’s quick reaction.

By issue #2, our heroes are getting ready for Dazzler’s debut singing performance, and the Avengers’ resident fashion designer takes a cheap shot at Cap’s clothes, which I don’t think fazes him in the least. 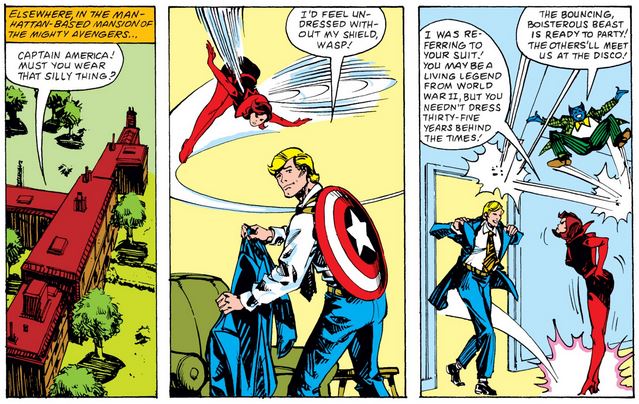 When—quelle surprise!—supernatural hijinks break out at the disco (thanks to the Enchantress), the heroes all break out into fight mode, with Cap silently mocking his own age while helping out the X-Men’s Colossus, whom he seems not to have met yet. (I like to think “Brick House” was playing during this part.) 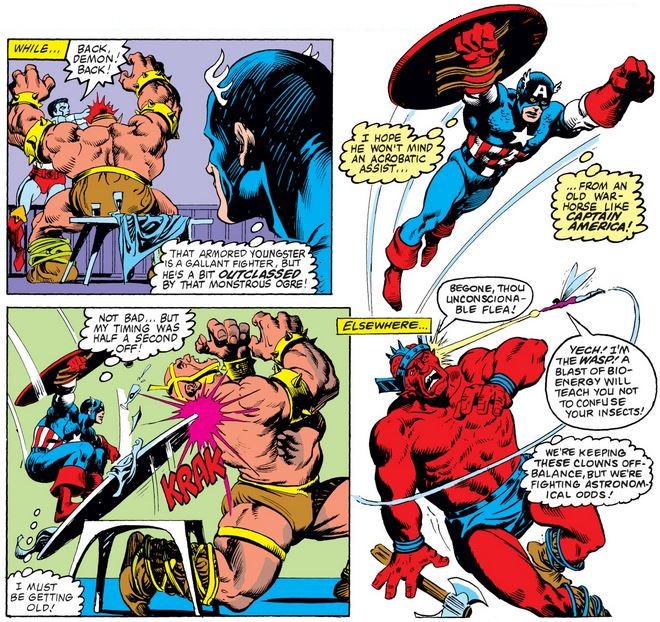 After the battle ends, Dazzler mourns the death of her singing career, and knowing the importance of mourning as well as anyone, Cap counsels Spider-Man to give her space. (Come to think of it, Spidey should know about mourning by this point too.)

Finally, the heroes all gather to help Dazzler get another audition… and it just might be overkill. 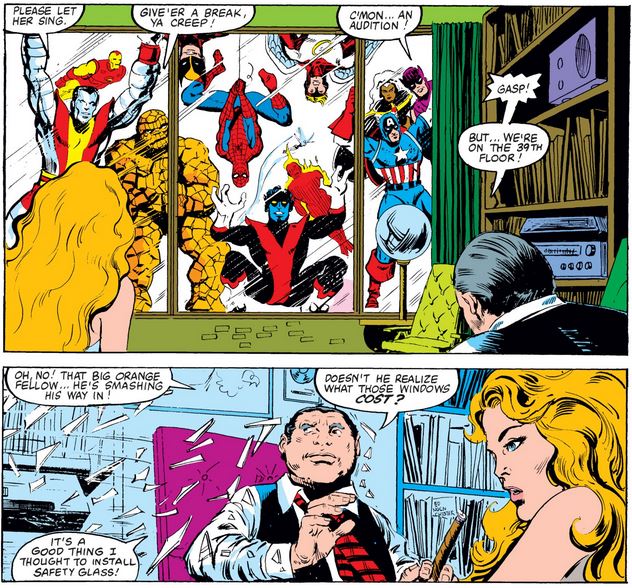 But when Cap talks, people listen!

In the next issue Dazzler fights Doctor Doom, so the title obviously got more serious from here!

All collected in: Marvel Masterworks: The Avengers Volume Twenty

Both collected in: Marvel Masterworks: Dazzler Volume One