These issues see a return to normalcy after the controversial Avengers #200, if by “normalcy” you mean the return of Ultron—not to be defeated, unfortunately, by Jarvis, seen above in one of my favorite Avengers covers. (The cover refers more to the solo Jarvis back-up story, from which we’ll see only one panel here). Plus, we get a couple panels from Marvel Two-in-One #69, costarring the original Guardians of the Galaxy alongside the Thing, but with Cap and the Avengers making a quick but meaningful appearance.

Like so many recent issues, most of Avengers #201 reads like a “day in the life” account, beginning with the team cleaning up after the battle with the time-tossed threats Marcus Immortus brought forth in the last issue. As you might expect, Cap guides the repair efforts…

…and, of course, saying please and thank you (as well as still refusing to see that Iron Man is Tony Stark, despite a wealth of evidence by this point).

As he did in issue #197, Cap recommends rest for his team after a harrowing ordeal.

On his regular patrol of the mansion, Cap notices a lapse in security, and when an old friend corrects it, he experiences a lapse in his sense of humor too.

I like the playful ribbing Cap and Clint engage in above, referencing their difficult working relationship in their earlier years while reinforcing their friendship now.

Ultron makes his presence known to the Wasp at the end of Avengers #201, and she lets the rest of team know in Avengers #202 by flying through the window, after which they are on high alert for intruders… 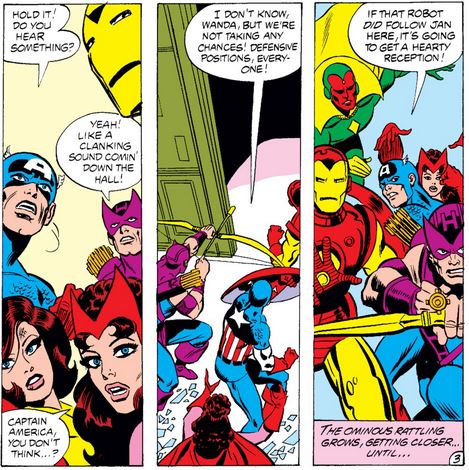 ..such as their faithful butler Jarvis.

Stand down, Clint, stand down.

Convinced that Jarvis is not a threat, the Avengers start making plans for dealing with Ultron, starting with a specific precaution.

Cap makes clear below that this isn’t chivalry but strategy based on their last battle with the evil robot (in Avengers #171), but understandably, Wanda objects to being protected, especially when she is their most powerful weapon against Ultron.

Jocasta explains that her sensors are malfunctioning (possibly due to some Ultronic disturbance) and Vision offers to “take responsibility for [his] wife’s safety,” an idea that Cap appreciates and Wanda begrudging agrees to.

That said, each Avenger prepares for the upcoming battle in his or her own way, with Cap choosing to relax with some training exercises (including the always puzzling vertical shield throw).

But Cap forgets to guard against his greatest weakness, as we saw in issue #194: flirtation.

At least the culprit is upfront about it this time—and Hawkeye gets a little of his belligerence on, criticizing Cap’s strategy.

I’ll let you see for yourself how Ultron infiltrates the mansion and escapes with the Scarlet Witch, but it takes the help of a returning Thor to defeat him in the end, starting with a tag-team effort with Cap.

Avengers #203 is primarily a Beast-Wonder Man buddy comic, but Cap does feature in the beginning, putting a bow on their battle with Ultron and once again advocating for some rest.

Lest you think I forgot… in the back-up story “Bully!” in Avengers #201 (which apparently takes place earlier than the main story), Jarvis takes his once-a-fortnight sabbatical, and Cap conveys the team’s affection and appreciation (and even sends love to Jarvis’s mum).

Finally, Marvel Two-in-One #69 stars the original Guardian of the Galaxy along series regular the Thing, but unlike issues #4-5, Cap plays a very minor role here, first agreeing to let the Fantastic Four check out killer… fog… over New York City.

Later, the Thing meets a young Vance Astro, who shows why he will later become the hero Major Victory, inspired by a certain fella we all know.

Both collected in: Marvel Masterworks: The Avengers Volume Nineteen

Collected in: Guardians of the Galaxy: Tomorrow’s Avengers, Vol. 2